Shichahai and the Grand Canal

Beijing can be almost unbearably hot in summer, so getting out of town can be a relief. May I recommend taking the metro out to the scenic Shichahai district in the northern part of the city?

From the centre of Beijing, several busses and a few metro lines take you to Shichahai. I took metro no 8 directly. Very easy. (You may remember clever thieves got the better of me in just this idyllic area. But that could happen anywhere, so we won’t hold that against Shichahai.)

This district dates all the way back to the 12th century Jin Dynasty, and has hutongs, royal mansions, gardens, flowers, tall willow trees, and ten Buddhist and Taoist temples surrounding three lakes. In fact, Shichahai means ‘the lake of ten temples’. Back in those heady empire days, the district was known as héyán, meaning riverbank. 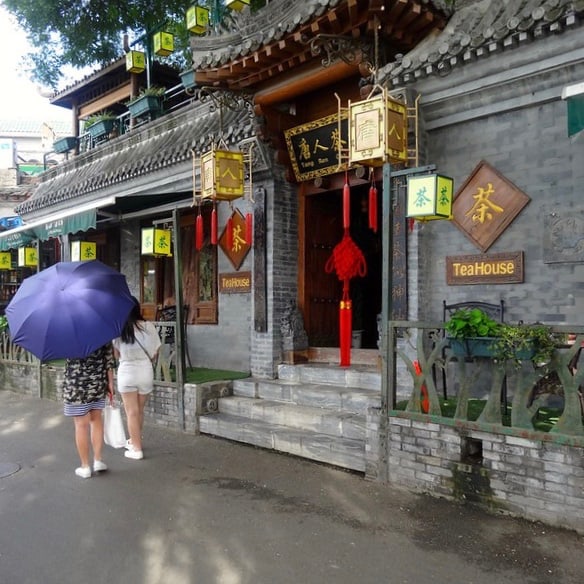 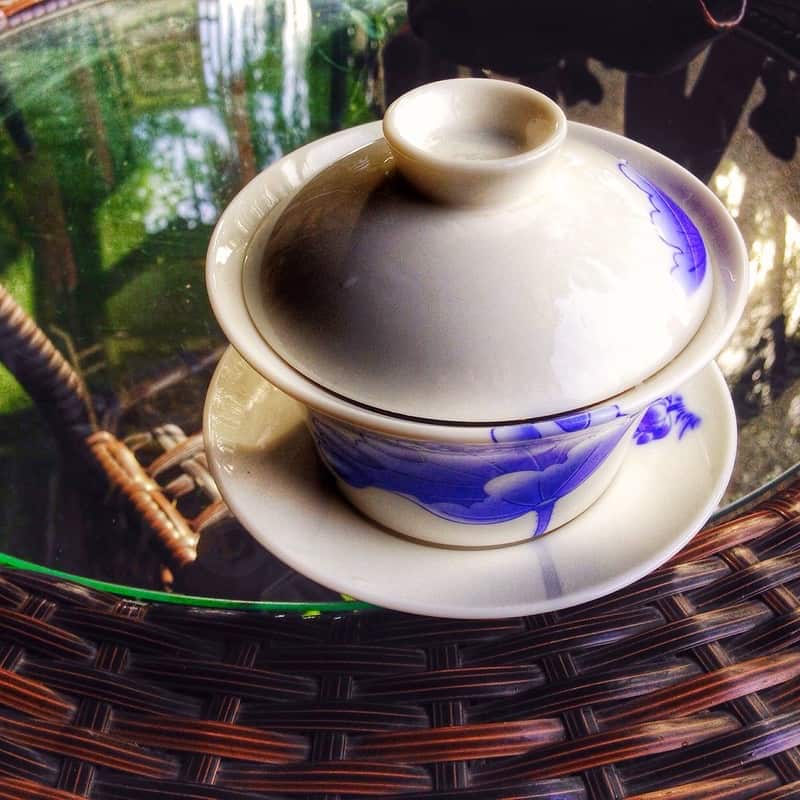 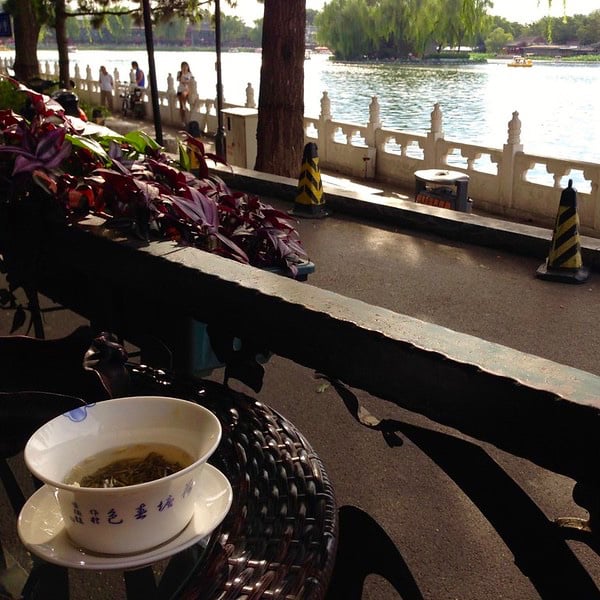 Just like Beijing’s Summer Palace, it’s a refreshing place to wander on a hot summer day. And as soon as the sun sets, there’s all kinds of nighttime fun to be had.

A stone plaque I walk past, describes the district as ‘a watery place in Northern China’, the origin of the ancient capital and its culture, as well as an ideal place for experiencing the folk custom, learning history and enjoying the latest trends. Tall order!

In addition to the historic buildings, it’s a vibrant commercial area, and has been since the 13th century. 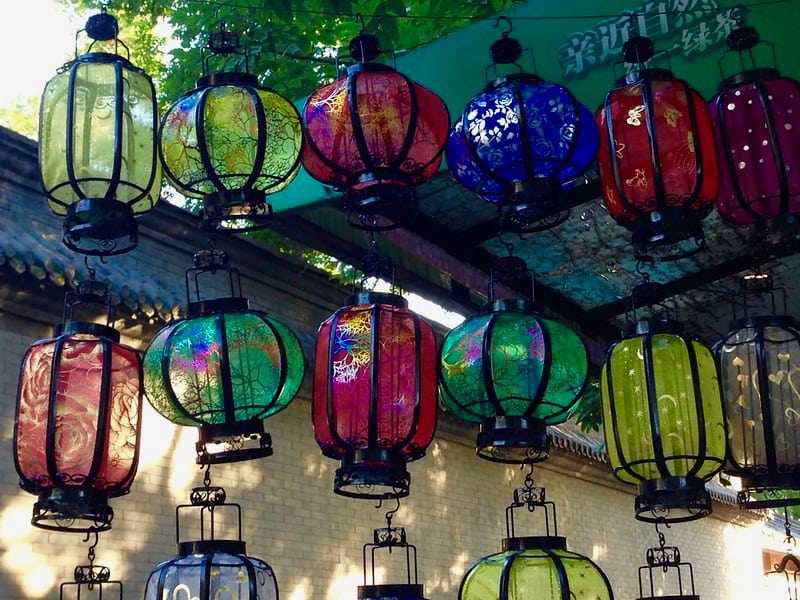 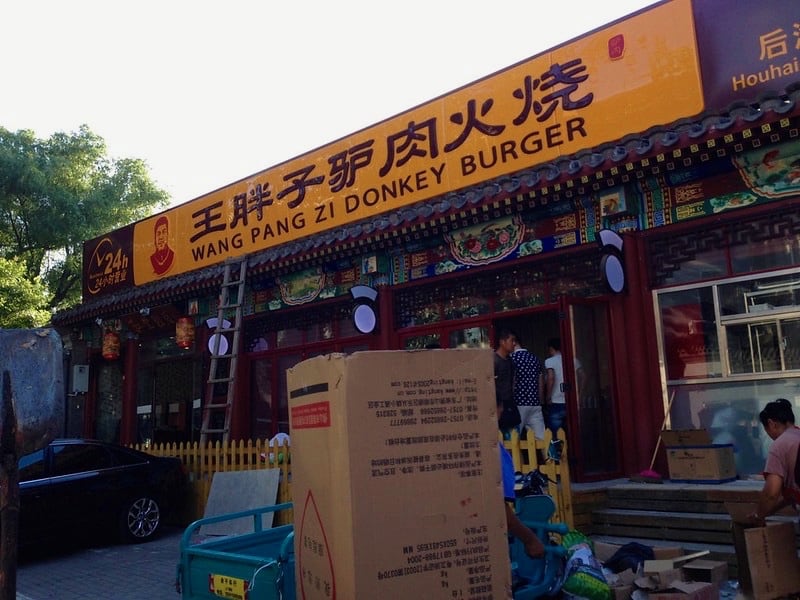 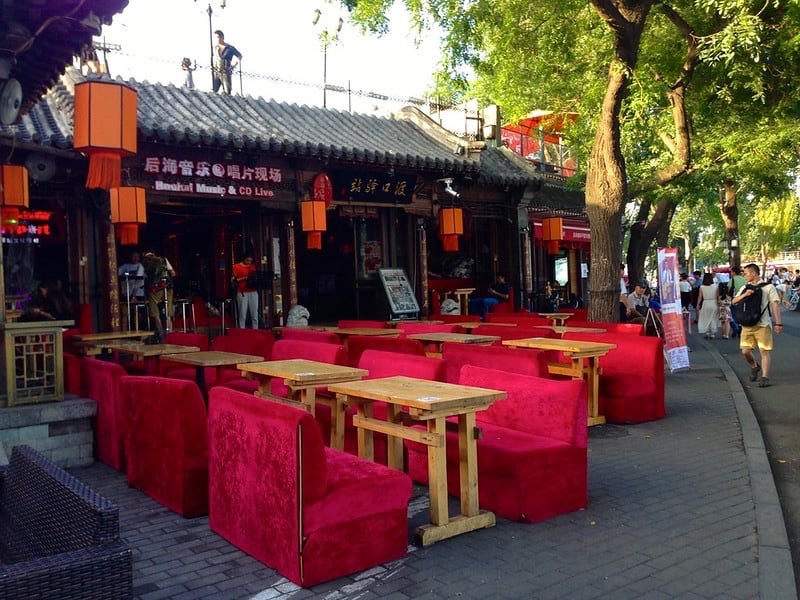 In Shichahai, we also find the northernmost part of the Grand Canal, which is why I’m here. I’ll get back to this gigantic work of engineering in a bit. But first, a glimpse at this lively neighbourhood. 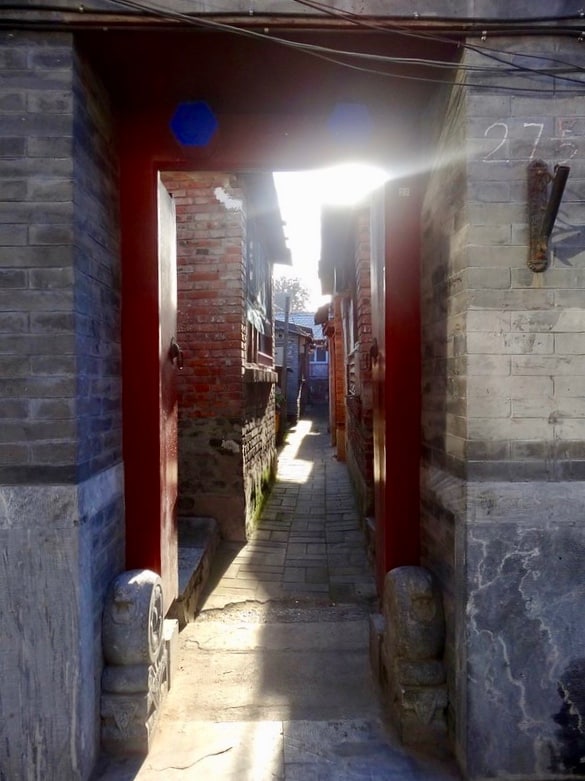 I mentioned the hutongs further up here. A hutong is simply a narrow alley between rows of single-storey houses. Often, there are lovely gardens and courtyards. 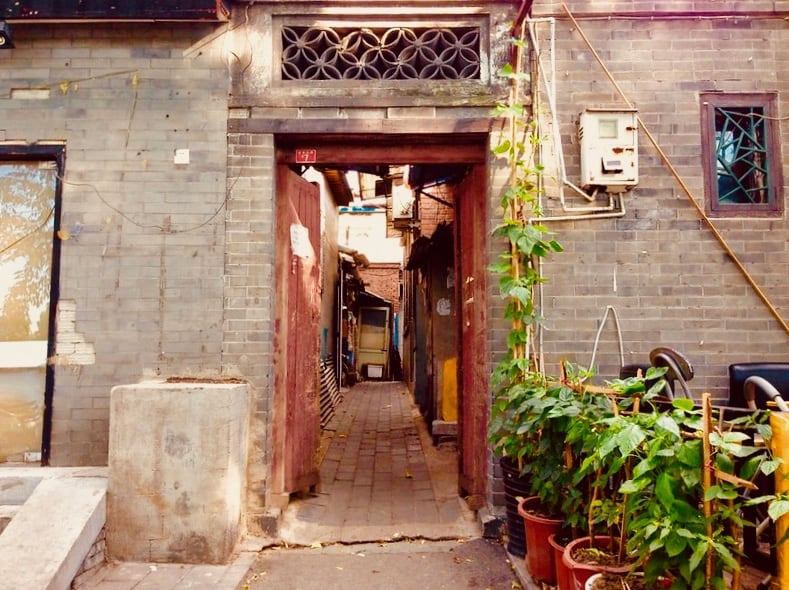 Even though Beijing is being gentrified at lightning speed, this ancient urban housing system is still alive and well in two areas of the Chinese capital. One is here in Shichahai, where the system was laid out some 800 years ago. 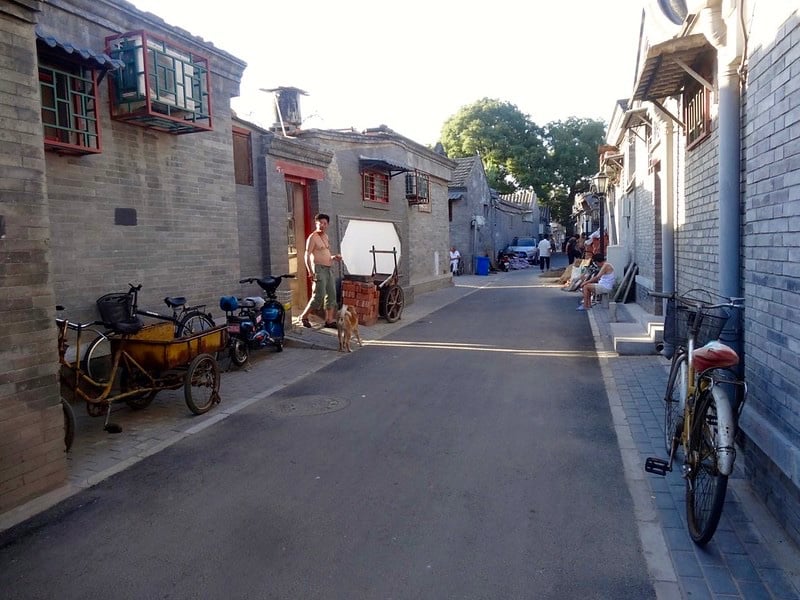 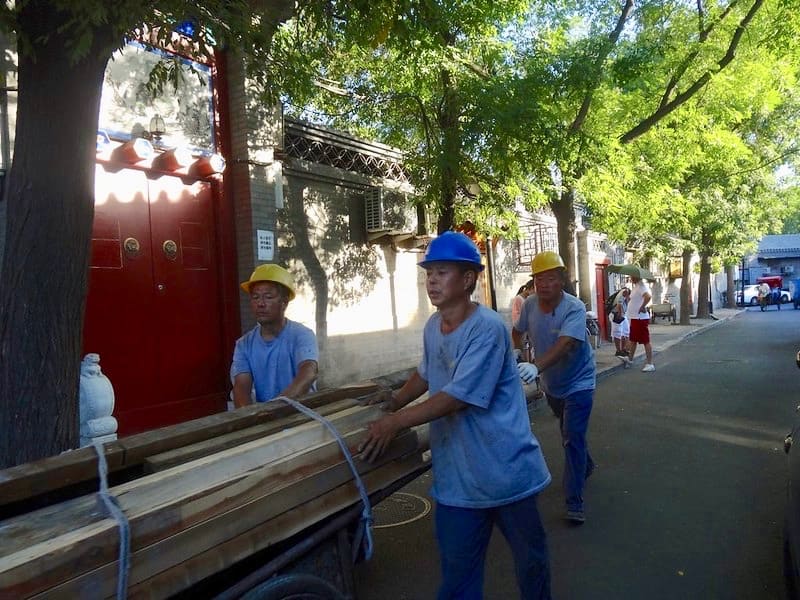 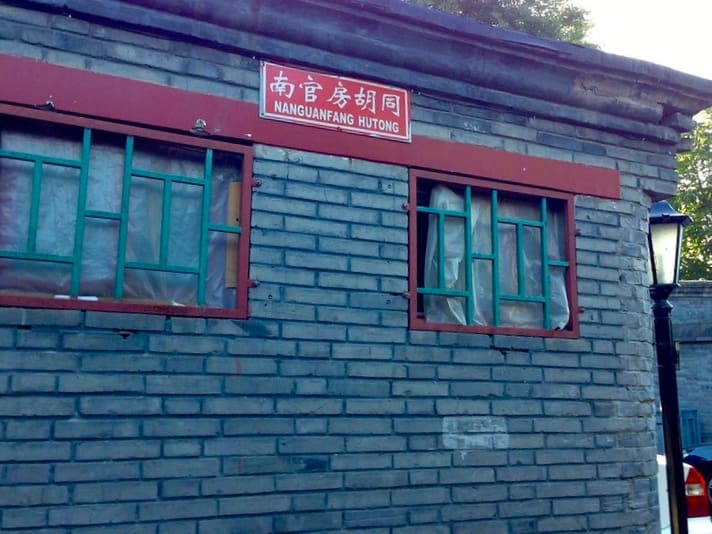 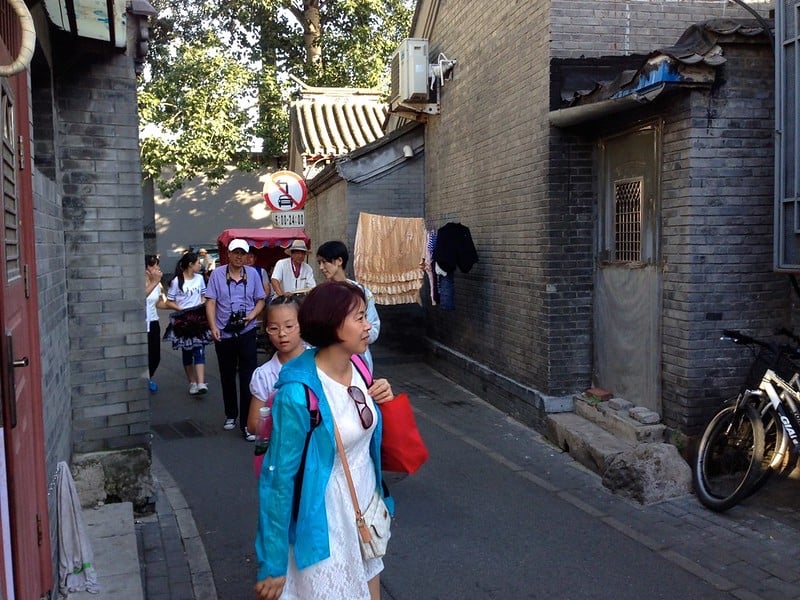 Some people have to work, others can traipse about as tourists in their own land

Life along the lakes of Shichahai 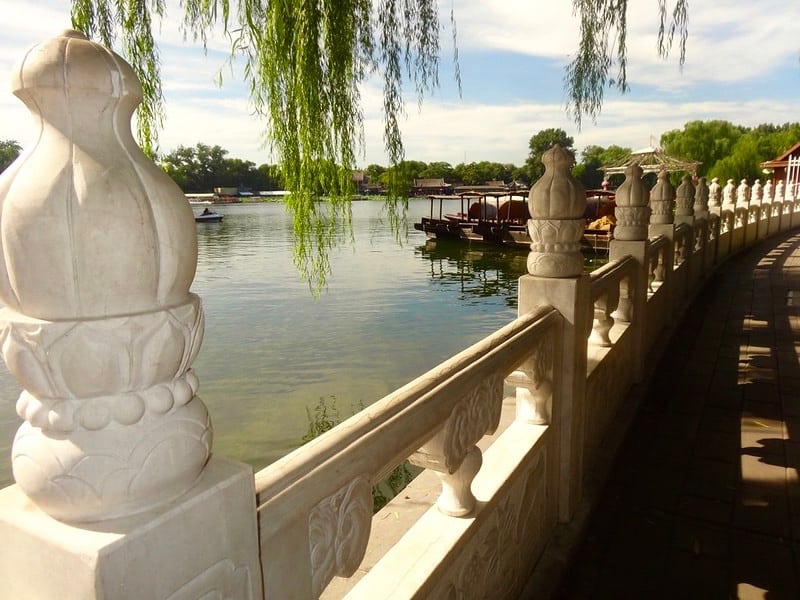 The three lakes are Qianhai, Houhai, and Xihai: Front Sea, Back Sea, and West Sea, respectively. Pragmatic naming. I can respect that. Houhai Lake is part of the Grand Canal system. 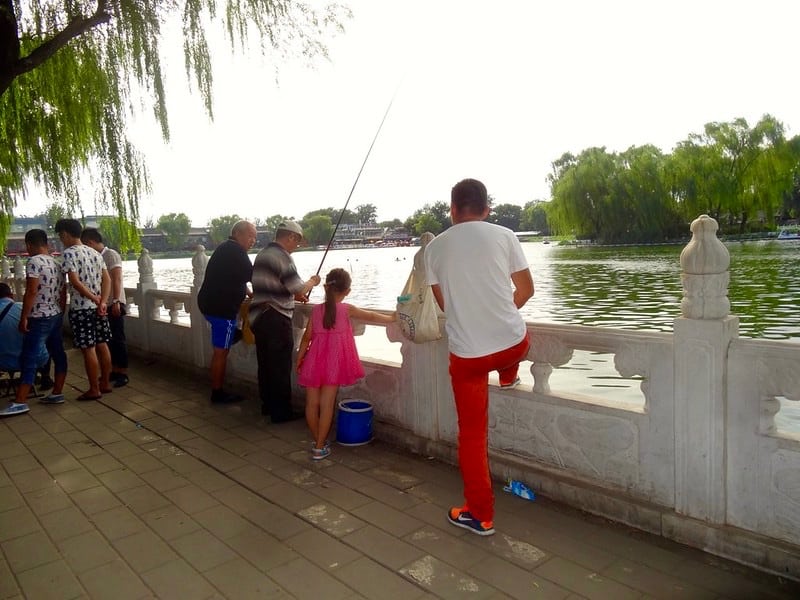 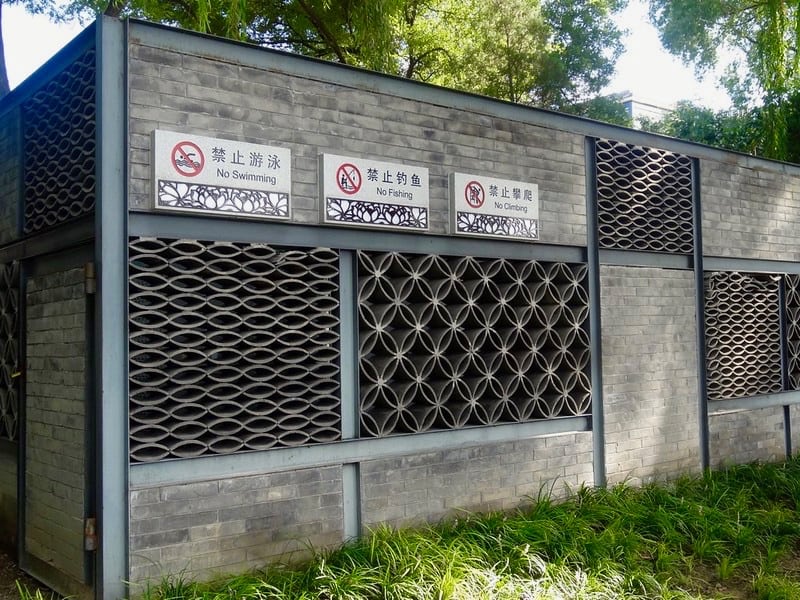 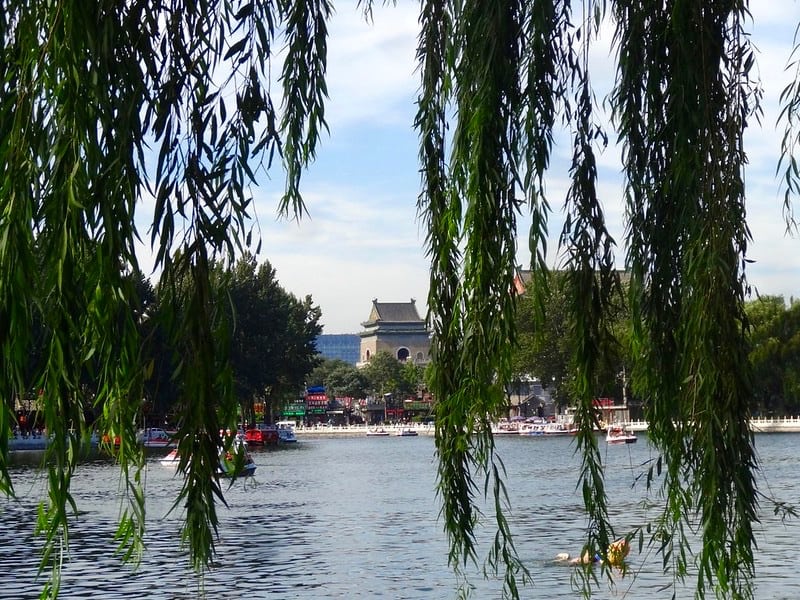 Swimming and fishing aplenty. I’m rather enjoying this delightful disregard of the rules. 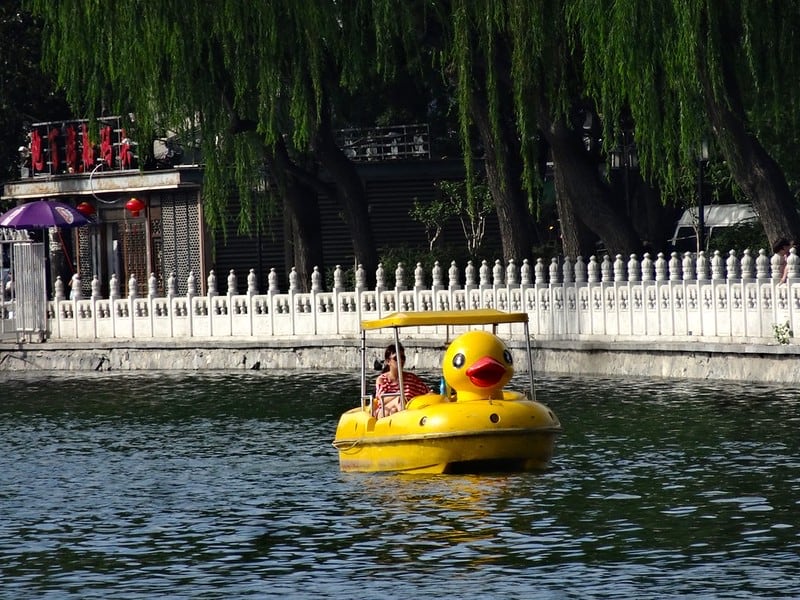 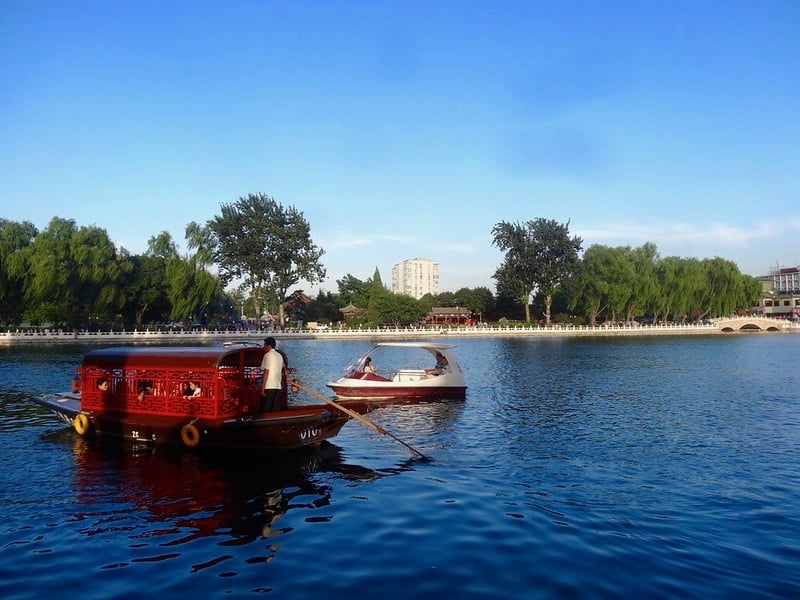 Summer fun on the water

The Grand Canal: the oldest and longest in the world

The Grand Canal is the boss of all human-built waterways. Not only is it the oldest in the world – construction began 2500 years ago – it is also the longest, more than nine times longer than the Suez Canal. This is where the first water lock gates were invented, by one Liang Rui, 1434 years ago. A few centuries later, in 984, Qiao Weiyue, invented the pound lock (a chamber with gates at both ends to control the water level), which is still in use today. It took a further 800 years for one to be built in the west.

In fact, we could ask ourselves, without the Grand Canal, would China be the same?

…the world’s largest and most extensive civil engineering project prior to the Industrial Revolution. It formed the backbone of the Empire’s inland communication system, transporting grain and strategic raw materials, and supplying rice to feed the population. By the 13th century it consisted of more than 2,000 km of artificial waterways, linking five of China’s main river basins [including the Yangtze and the Yellow River]. It has played an important role in ensuring the country’s economic prosperity and stability and is still in use today as a major means of communication. 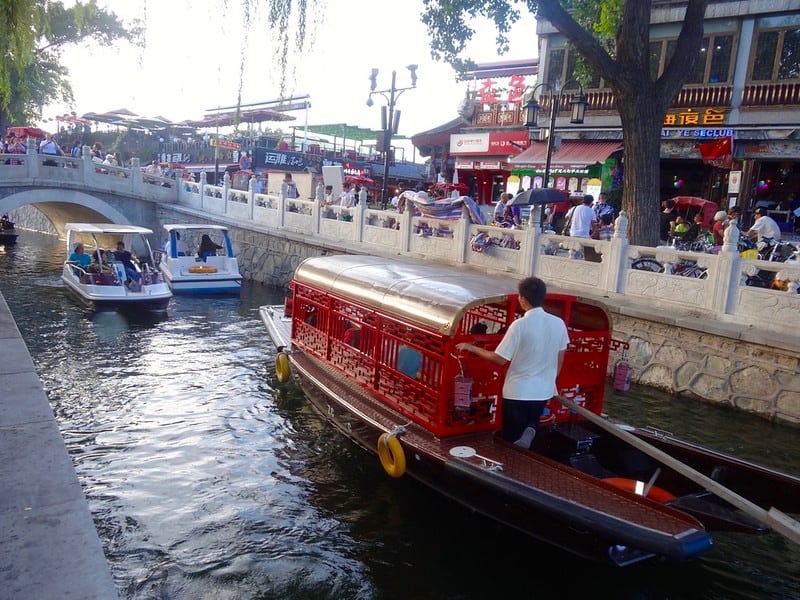 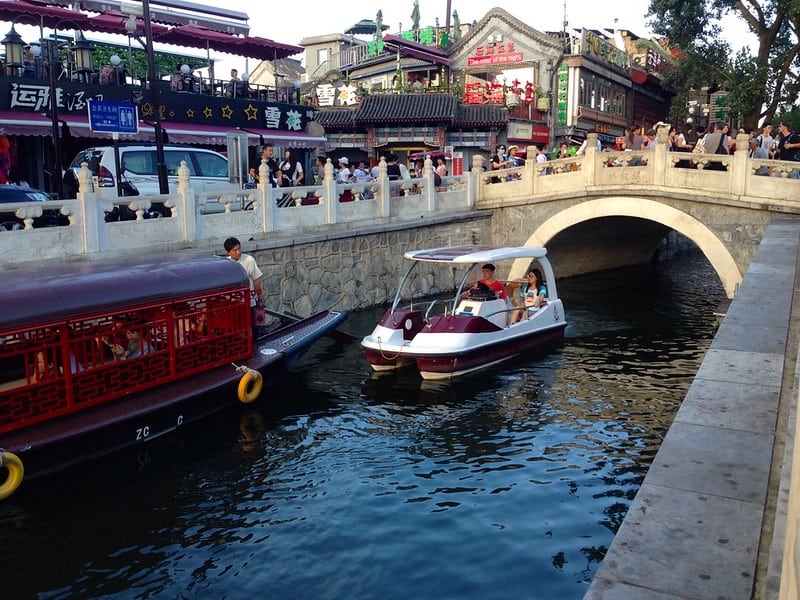 The canal links Beijing with Hangzhou in the south, a 1,776-km-stretch, passing through 8 provinces on its way. 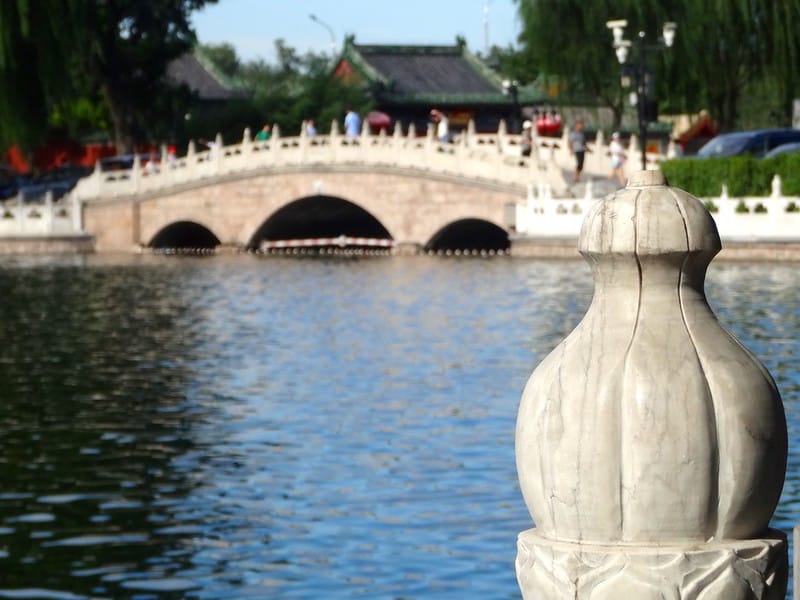 Some interesting characters, i.e. explorers and travel writers (being a bit subjective today), have travelled on the Grand Canal. In the late 13th century, Marco Polo did. In The Travels of Marco Polo, he describes the Grand Canal, (but oddly, not the Great Wall.) He talks about

A canal-based transportation system linked China’s huge cities and markets in a vast internal communication network in which paper money and credit facilities were highly developed. The citizens could purchase paperback books with paper money, eat rice from fine porcelain bowls and wear silk garments, lived in prosperous city that no European town could match.

Half a century later, Moroccan explorer Ibn Battuta travels on the Grand Canal up to Khanbaliq (present-day Beijing).

A boat journey along the canal would surely be an interesting experience, enjoying the landscape en route: cities, countryside, the mountains of Shandong. All the way from Hangzhou to Beijing – or the 12-hour overnight leg between Hangzhou and Suzhou (as opposed to 2 hours on the motorway, but we’re not counting hours when we’re out exploring, are we…)

For now, though, we’ll have to settle for this glimpse of the canal’s northern terminus here at Houhai Lake, as daylight fades. 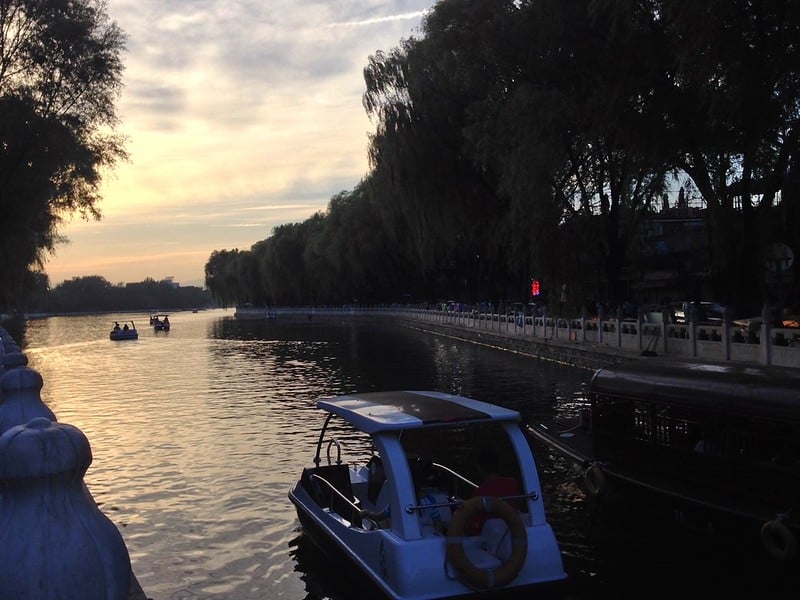 The Grand Canal is a UNESCO World Heritage site.