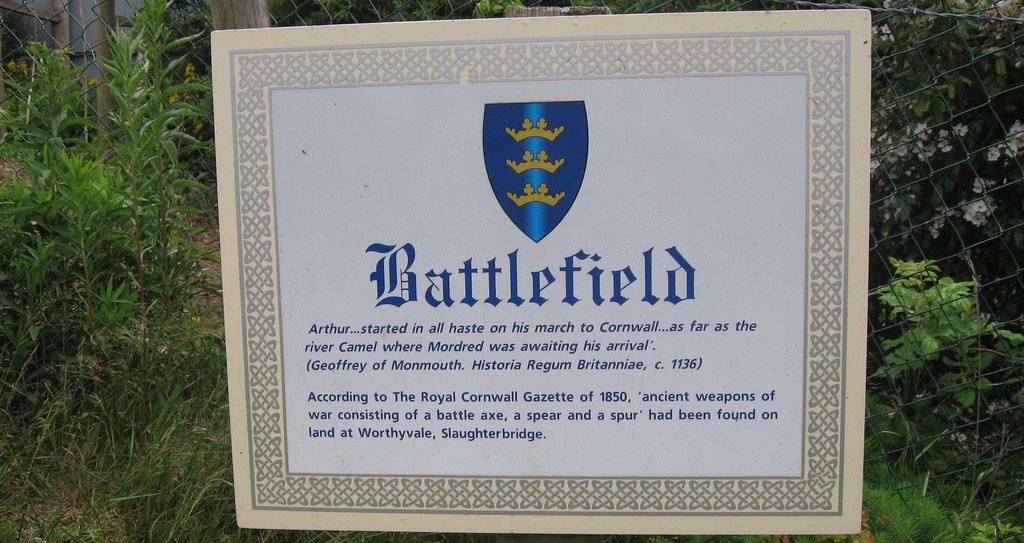 Last week on Cornwall Sunday, Tintagel was the headline act, the place where the legendary King Arthur was conceived. Only right then, to also feature the place where his life ended (or did it?).

On our way from Bodmin Moor to Port Isaac, we drIve along a small Cornish road, the B3314. Between the villages of Camelford and Tintagel, we happen to pass a sign for the Arthurian Centre. Seem like a fun stop, particularly for a restless 8-year-old, so I make a quick U-turn.

That turns out to be a good decision, she enjoys it heaps. (Of course, she would have enjoyed any stop – she finds road trips a bit boring.) But the Arthurian Centre has a large playground with a castle (of course), tea and cakes for sale, brasses to rub, and a children’s Grail Trail. 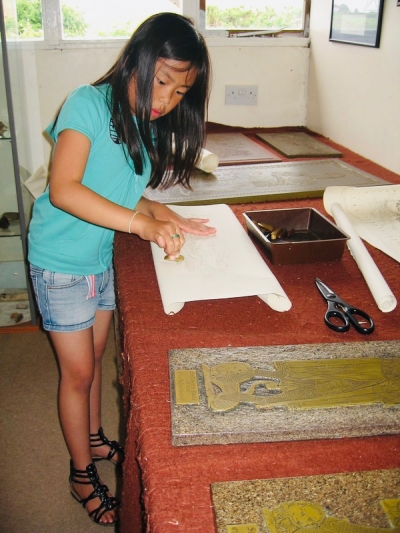 For grown-ups, there’s an exhibition room with panels, photos and texts covering the 1 500 years of history surrounding the elusive king – a nice mixture of legends and historical facts. And best of all, there’s a nature trail, leading to Slaughterbridge and King Arthur’s Stone. 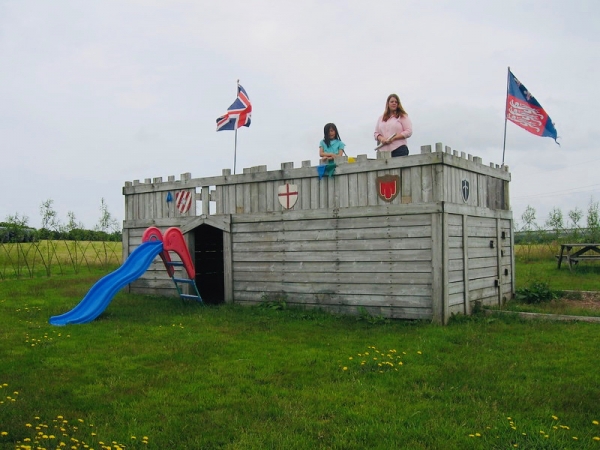 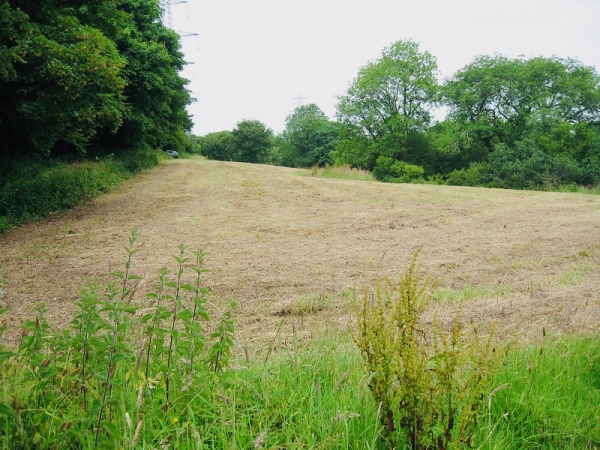 Difficult to imagine this peaceful field was once the setting of a fierce battle, isn’t it? There’s historical evidence suggesting battles have been fought here in ancient times, but was it the legendary Battle of Camlann in 537?

Our friend, Geoffrey of Monmouth (the 12th century author of History of the Kings of Britain), thinks so. This is what he has to say about the Battle of Camlann:

Arthur was filled with great mental anguish by the fact that Mordred had escaped him so often. Without losing a moment, he followed him to that same locality, the River Camlann, where Mordred was awaiting his arrival.

Accounts of the battle talks of the little river turning red with blood, of Arthur and Mordred fighting hand-to-hand on a bridge across the river. Arthur slew Mordred but was already fatally wounded by Mordred’s poisonous sword. From here, various endings are offered. In one, Arthur staggers to his death right here. In another, he is brought to Avalon, a place with healing properties (possibly the Isles of Scilly off the Cornish coast).

By some accounts, Mordred was Arthur’s nephew. Others have claimed he was Arthur’s illegitimate son by his half-sister, the sorceress Morgana. Today’s family relationships can be bad enough, but those of old seem somehow more dramatic, don’t you think?

Continuing past the battlefield, across the grounds of Worthyvale Manor (mentioned in the Domesday Book), we arrive at Lady Falmouth’s Secret Garden, created about 250 years ago, around the pièce de résistance: Arthur’s Stone. 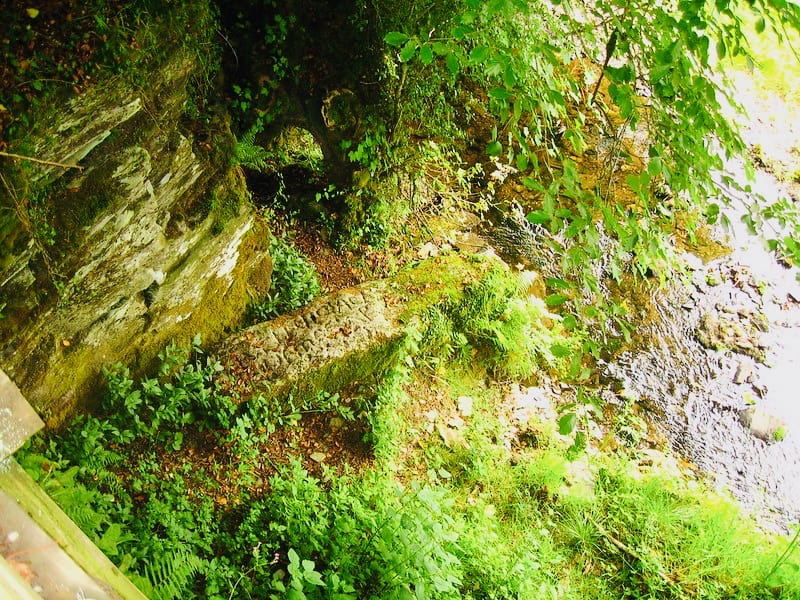 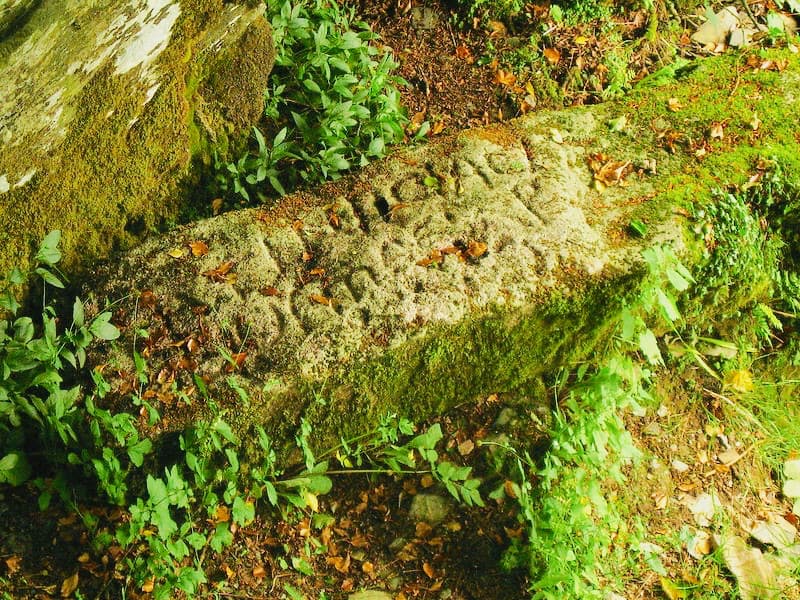 Arthur’s stone, seen from the bridge above the creek and close-up

Well, a memorial stone from his era, at any rate. It’s a large stone, almost 3 metres long, and it’s inscribed in Latin. The incomplete inscription reads something like LA (TI) NI IC IACIT FILIUS MA (…) RI, and its meaning has been hotly debated through the centuries. Is it merely “Latinus lies here, son of Ma (…) ri”? Or is it LATIN HIC JACET FILIUS MAGNI ARTURI – here lies Latin the son of Arthur the Great?

Interestingly, the stone is also inscribed in Ogham, an ancient Celtic script, dating it to 6th century, the time of Arthur. Irish archaeologist, Robert Macalister, suggested Ogham may have been a gesture alphabet for secret communication between Druids. Here’s the vertical version of the Ogham alphabet: 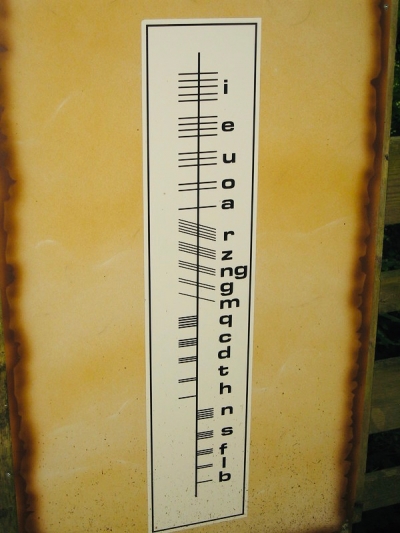 It reminds me of the Viking era runes we have up here.

Geoffrey of Monmouth isn’t the only one to wax lyrical about this place. Alfred, Lord Tennyson, wrote this on a visit here on 7 June 1848:

Camelford, Slaughterbridge, clear brook among elders. Sought for King Arthur’s Stone, found it at last by a rock under two or three sycamores. The Stone, a nine foot pillar lies in a dank and picturesque setting by a stream. It is an inscribed memorial stone of the sixth century.

If you’re in Cornwall this summer, see if you can time your visit to July, when the Festival of British Archaeology 2012 takes place. Archaeology students and lecturers from Winchester University will be digging at Slaughterbridge all through July, and you can join them. At the Arthurian Centre, there will be two Living History Weekends this summer – 28/29 July and 11/12 August – complete with battle re-enactments, archery competitions, falconry and much more.