Smoking sheesha in Edfu and waterborne shops at Esna

Tuesday 8 January 2008: At Aswan, we were joined by new passengers. They would naturally stop ad have a look at the Horus Temple at Edfu. But we’ve seen it, been there, done that. Instead, we’re invited to a cafe to have a go at the water pipe, smoking sheesha in Edfu. Well, some of us, anyway. 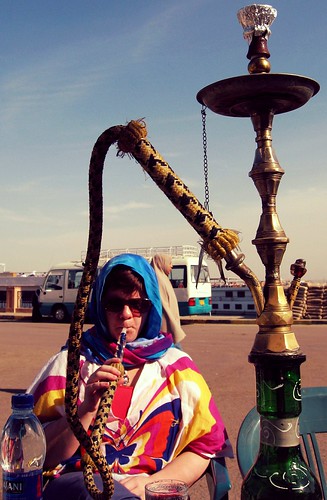 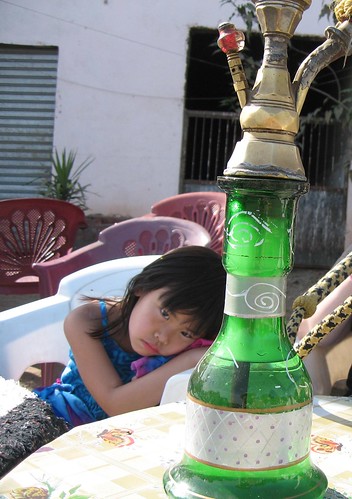 Alex tries sheesha as well. Even Cat insists she is smoking. So now I’m teaching my kids to smoke, you ask? Alex detests smoking and thinks the sheesha tastes foul. Nearing 20, she’s probably not about to start smoking now so I reckon no harm is done.

Returning to the boat, I’m propositioned by a 15-year-old. Would I marry him? I tell him I already have two husbands. Surely, that’s very tiresome for me. It isn’t? He’ll happily be number three. We laugh and part in good spirits.

Heading down river towards Luxor, I ponder this journey we’re on. Many think this is too strenuous a holiday to do with kids. Why not stay in Hurghada and hang at the beach instead? Thing is, I don’t like “lie on the beach and do nothing”-type holidays. They bore me silly. Alex tells me she has learnt so much here. And Cat has enjoyed it, too – with all the attention, the dressing up, running among ruins, seeing crocodiles – alive and mummified. But she is showing signs of temple fatigue. The Luxor temple, the last one, is tomorrow evening. We’ll see.

This time, I make sure we see the locks at Esna up close. I wonder if we’ll see a traffic jam. That would be interesting here on the Nile. But it’s all pretty efficient. At Esna, shops are waterborne, i.e. local peddlers in rowing boats toss plastic-wrapped wares on board – whether we want to or not. Money is put in the plastic bags and tossed back – or at least, that’s what they hope. They’re persistent and literally shower us with dresses, galabiyahs, t-shirts and souvenirs. Don’t think I need any. Sorry.

Luckily, there are other ships nearby, so after a no doubt disappointing outcome from us, they head for new targets.