I’m just at the tail end of a brief visit in Sofia, one of the few European capitals I haven’t seen before (one of my fave travel reasons). Sofia – apart from having such a lovely name – has been a pleasant surprise: wide open boulevards, varied and interesting architecture, nice cafes, and just a very convivial city to wander around. Not sure why I haven’t been here before, actually. Here’s a wee glimpse of the Bulgarian capital, seen through the lense of my iPhone: Sofia by Instagram.

Discovering a new capital city this morning. And one with such a beautiful name, too.

While we’re on the subject of houses of worship, I feel it’s only fair to include the Banya Bashi Mosque as well, a remnant of Ottoman rule in Bulgaria: built by Minar Sinan in 1576.

Arembantbof Ottoman rule in Bulgaria: the Banya Bashi Mosque in Sofia; built by Minar Sinan in 1576.

Of course, there’s more than just religious architecture in Sofia. This building is an excellent example of Socialist Classicism, isn’t it? Built in the early 1950s along with two other (equally imposing) buildings, together they’re called the Largo. It was once the headquarters of the Bulgarian Communist Party. Today, it houses National Assembly offices. Reminds me a bit of the Palace of Culture in Warsaw. 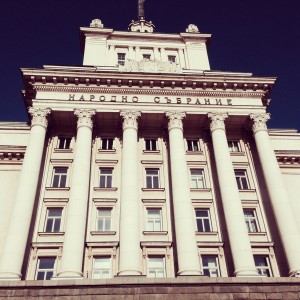 I love this little glimpse into the life of Sofians on their way home from work this evening.

Art in Sofia takes many forms. Here’s a somewhat disconcerting example of the city’s street art:

My final dispatch from Sofia is this piece of slightly disconcerting street art.

… and finally, my favourite (of course): high on a pedestal, in the very centre of the city, watching over it, is the golden goddess Sofia. The statue replaced one of Lenin – and quite rightly, too.

And here she is: Sveta Sofia, the Holy Sophie. A monumental statue high on a pedestal in the very centre of Sofia. She replaced Lenin. Think I'll take her home 🙂

Which is your favourite lesser-known European capital?