As I’m finalising this post, Yerevan has become a happening place. The prime minister just resigned a few hours ago, after several days of protests. According to my blogger friend Megan, who is there just now, the whole city is a party. The police, military, and everyone is partying.

Now, with Yerevan firmly on your radar, here’s my best tip for when you go: join a tour!

But not just any tour. This is a most unusual one, travelling through time, back to the Soviet Union. You will see places you wouldn’t otherwise think of, let alone find. You will get a better perspective on life in the USSR, you will walk away with an idea of how the ex-Soviet world (and even the world at large) has changed since the 1990s, and, not least, you will have great fun!

Organised and led by the consummate pioneer guide, Arpine at Envoy Hostel in Yerevan, this might very well be your most memorable hours in Armenia’s capital city. Along the way, you will enjoy humorous tales and Soviet jokes.

On a sunny Monday morning in July, we’re 6 people, all welcomed as revolutionary comrades. Arpine begins by telling us that here, in Soviet Armenia, the sun always shines. Everyone is happy because they feel lucky to live in the great Soviet Union. In fact, history before the country became part of the USSR in 1920 is irrelevant to these happy, smiling Armenians. 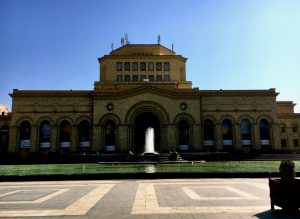 First stop is Lenin Square. Not the present-day name, of course. Today, it is called Republic Square. Arpine points out the various Soviet structures: the History Museum, the National Gallery, Government House 1 (formerly the People’s Commissariat), Government House 2, the Labour Union Building. The statue of Lenin that once held pride of place here, was removed shortly after the break-up of the USSR. What to replace it with? That’s still open for debate. Some suggest moving the statue of Sasuntsi Davit from its present location.

On that note, let’s move to its present location and have a look at this superhero. According to national lore, Davit drove the Arabs out of Armenia. Here he is, on the back of a horse. A horse with a tail… or is that Aladdin’s trousers? 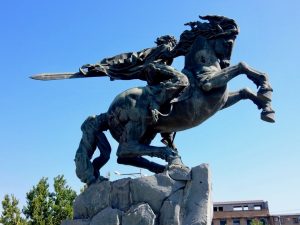 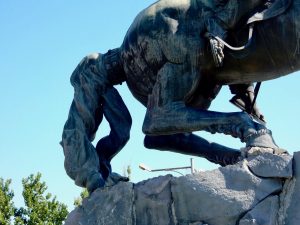 We’ll leave that hanging, as it were… and just mention that this is the most famous statue in Yerevan, as well as the most famous work of Yervand Kochar, who sculpted it in 1959. Bit of Soviet realism there.

Across the street is Yerevan railway station, in all its neoclassical socialist beauty. No sarcasm intended here, I really do think this is a beautiful building. 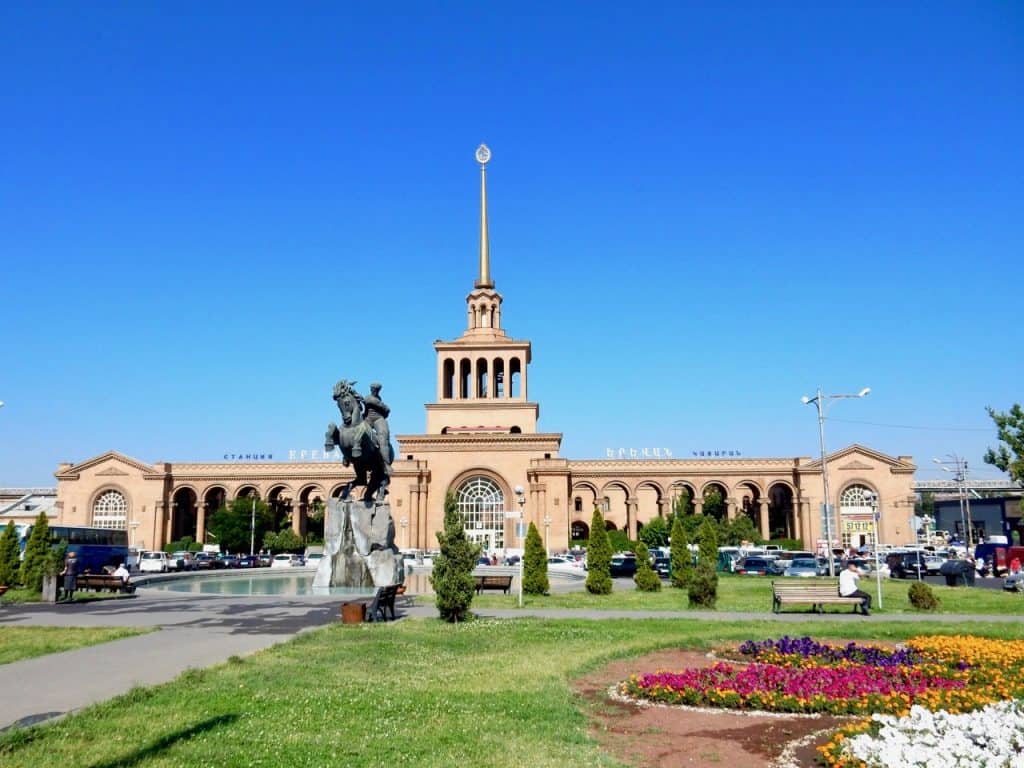 Symbols of the Soviet past is largely eradicated in Armenia as in most of the other former republics. But on top of this train station, the crest still stands. This, we learn, is because it features the beloved Mount Ararat, so an exception is made. 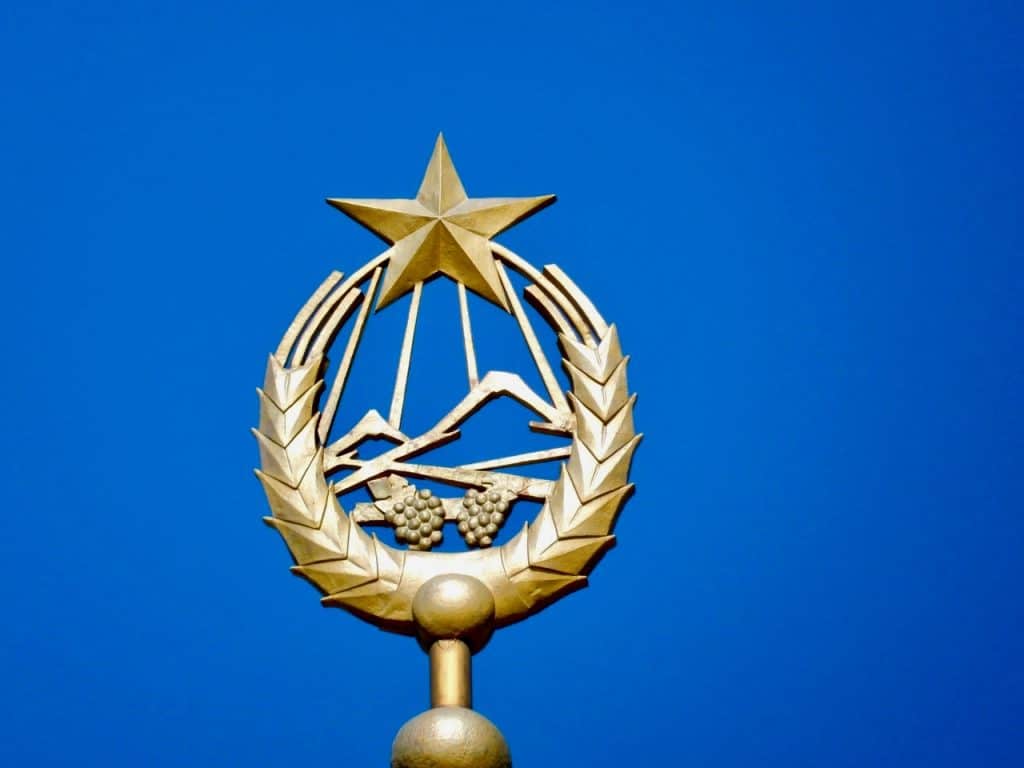 We hop on the metro – deep underground, as was the Communist habit, Soviets and others. Yerevan’s subway is artistically done up as well, though not quite as ostentatiously elaborate as in some other cities, such as Almaty or Pyongyang.

Getting off at Paradise station, we walk along the road to Nayarit 2, once a chemical plant (Nayarit 1 seems to be conspicuously missing). After the collapse of the USSR, this factory was in use for a while producing concrete. But those were dire times. In fact, getting paid was so rare, it made the national news! 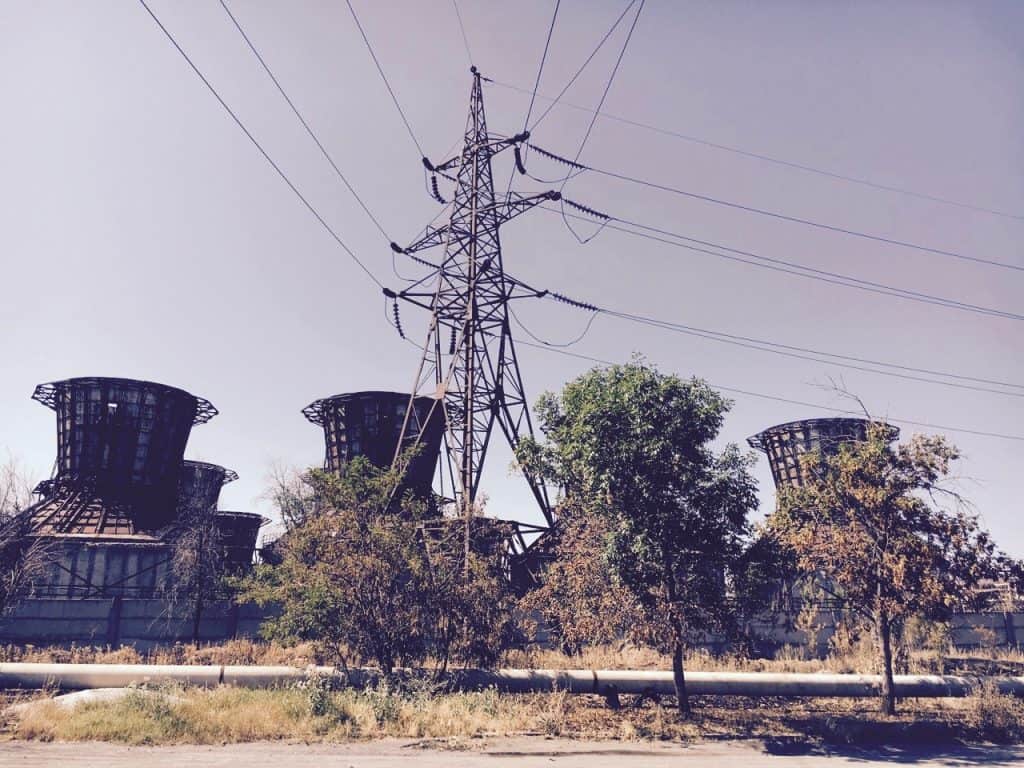 Like so many factories, it is now empty, left as was. It’s an eerie sight, this abandoned urban desert – looking a bit post-apocalyptic. 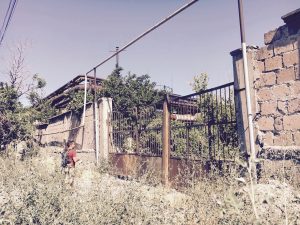 Lada, Moskvitch, Trabant, Skoda… the automobiles we associate with a time when Eastern Europe meant something quite different. Armenia had its own, the Yeraz. Arpine tells us Yeraz means dream. Like Martin Luther King, Armenians also had a dream, apparently: of being able to drive the car further than the factory gates before it broke down. (Your dad would no doubt like these Soviet jokes.) 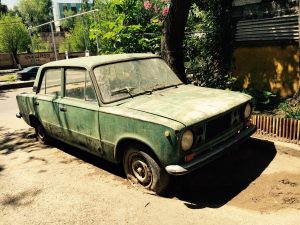 No photo of a Yeraz, unfortunately, but close enough, perhaps?

Time for a stop at the market; the Bangladesh market. So called because this district is that far away from the centre it might as well be Bangladesh. The suburb’s actual name is Malatia-Sebastia, population nearly 150 000.

This is mainly a residential area, and not somewhere you’re likely to run into many tourists. But the Bangladesh market is lively. Vendors are busy selling fruit and vegetables from open car boots; there’s spices, lavash bread, screw drivers, car appliances, all sorts of Practical Everyday Stuff. 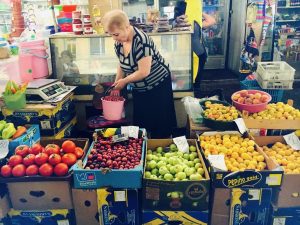 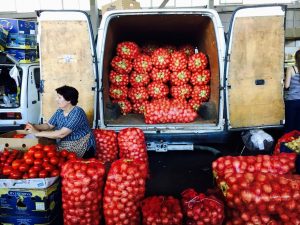 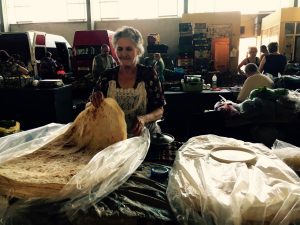 Lots going on here: peeling, slicing, chopping meat, filling buckets with berries, cleaning, setting out the bread, enjoying a drink, having a sit down and a stretch, flexing muscles, showing off… 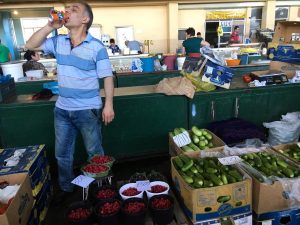 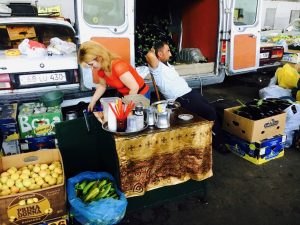 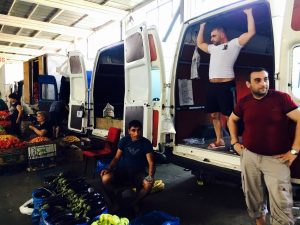 Tom spotted this one taking a nap. Probably well deserved. 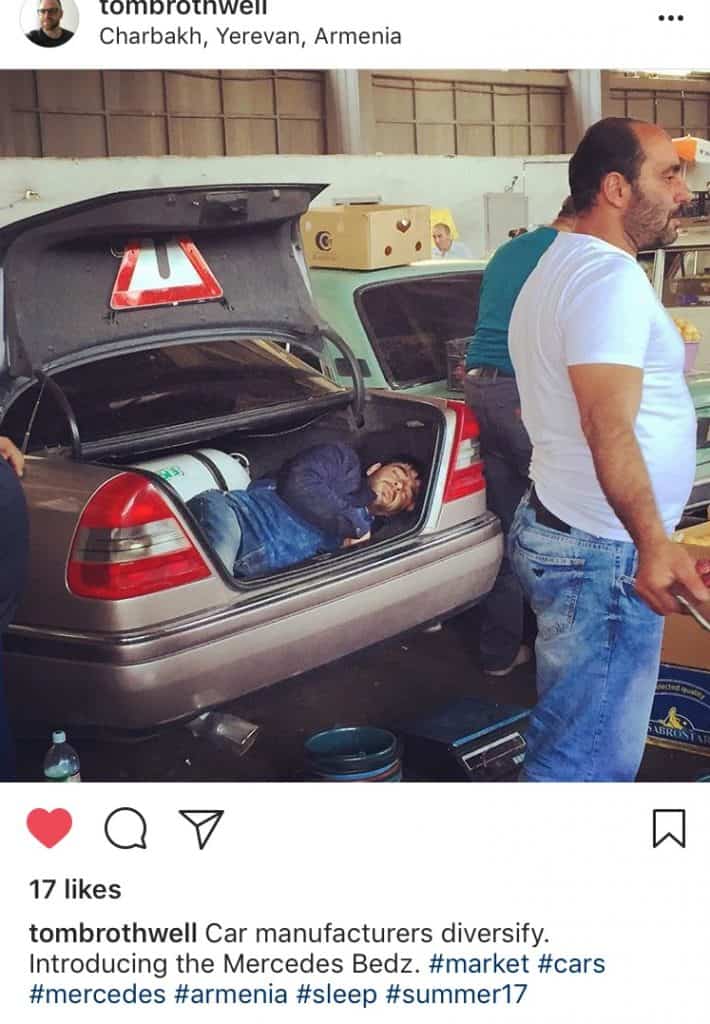 Next, we wander past an apartment complex. Arpine tells us it’s built to spell CCCP (USSR in Cyrillic script) when seen from above; to honour Soviets (officials, one presumes) as they flew in from Moscow. People still live here, of course, thousands actually. The lifts are no longer working. But what’s a 15 story climb every day? Exercise, that’s what. 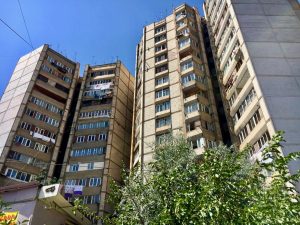 We have ice cream, vanilla with a dark chocolate shell. It tastes nice, but the name is the highlight. We nibble while ambling on; kids pass by on skateboards, people are out strolling on this summery afternoon. 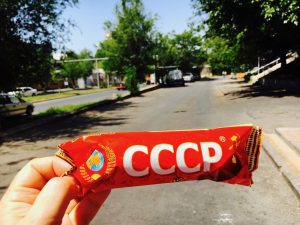 As a final treat, Arpine has a surprise for us: in the midst of a random playground by an apartment complex, underneath a tree, Lenin’s head has been abandoned! Left as some discarded plaything. 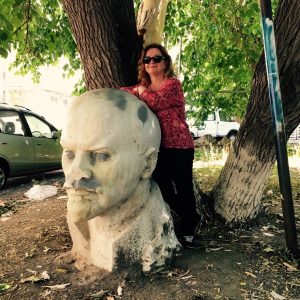 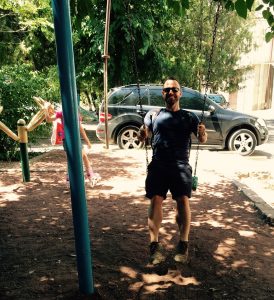 Conclusions – and some idle thoughts

This half-day jaunt through Soviet Yerevan leaves me with many sensations; sights, sounds, smells, places, memories.

What was life like in Yerevan during the Soviet era? As a young’un, I visited the USSR, so I have somewhat of an idea, however vague. My Intourist guides in Leningrad and Moscow were Lena and Anastasia. I remember them well; kind and lovely young women both. Just like Arpine. But whereas she laughs confidently, they were reserved, with careful smiles. A sign of the times? Perhaps. Or simply different personalities.

In Soviet times, everyone had a home, however small and basic. Back then, Lena told me apartments were allotted based on the number of people in the family, at a very low rent. In an old notebook I’ve jotted down “Leningrad: 12 square metres as a base, then 6 additional pr person. Rent: 1.3 kopek pr square metre”. Just cents, really.

Today, having somewhere to live isn’t a given. There are people living on the streets of the cities, also in Yerevan.

In the eastern part of Germany, there is Ostalgie, a nostalgia for the East. In the republics of the former USSR, it may not have a catchy name (that I have been able to find, at least), but the feeling seems to be just as prevalent: some (perhaps even many) long for the stable, predictable life of the USSR, without the financial challenges many face.

But there is little doubt the Soviet Union was a repressive regime, causing pain and suffering for millions during its 74 tumultuous years. That those who lived through it all (or at least, their children) can now make fun of it, crack jokes about it, and organise tours presenting it satirically, that’s a healthy sign, surely. Life has moved forward.