From Maulbronn, I’ve now travelled 60 kilometres in distance, and another century back in time. I’m in the little town of Speyer on the River Rhine. My excellent guide for the morning, Friederike Walter, asks if I have a fear of heights. We’re about to head up a whole lot of stairs to the top of the world’s largest Romanesque cathedral still standing. 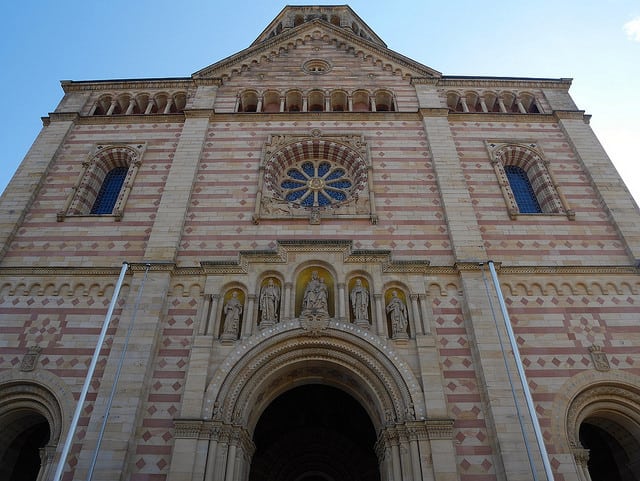 Luckily, there’s a halfway stop along the way: the lovely high-ceiling Imperial Hall, with nine enormous frescoes by Johann von Schraudolph along the walls and a well in the middle of the floor, with a clever contraption that lifts pianos up for concerts. The acoustic must be fantastic. 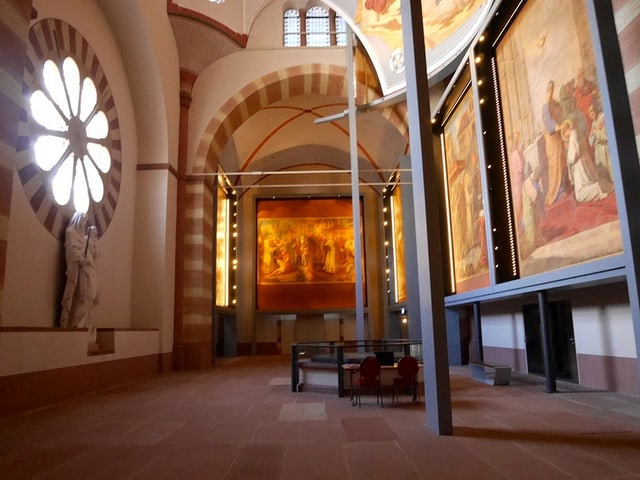 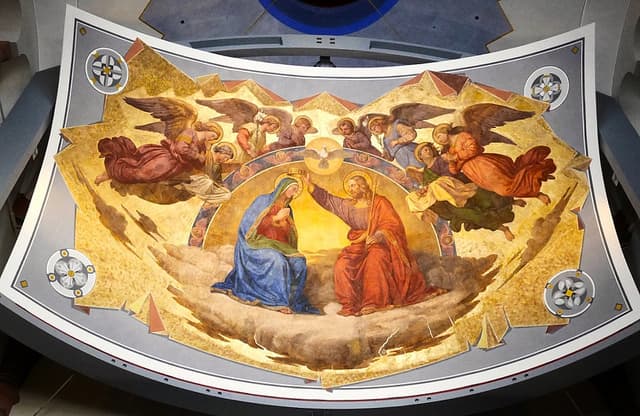 Top of the world in Speyer 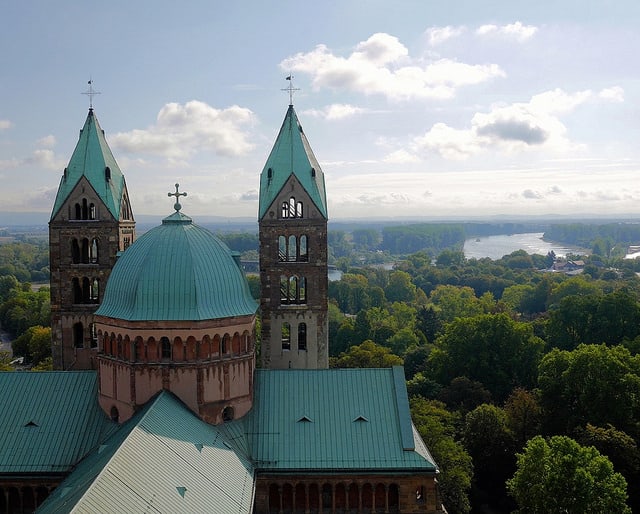 The view from the top is very much worth the climb. Through the arched openings, I see the Rhine as it comes around a bend, I see the rooftops of medieval Speyer, and I see industry in the distance: the BASF factory on one side, the Philippsburg Nuclear Power Plant on another.

Old and new. Then and now. All in one panorama. 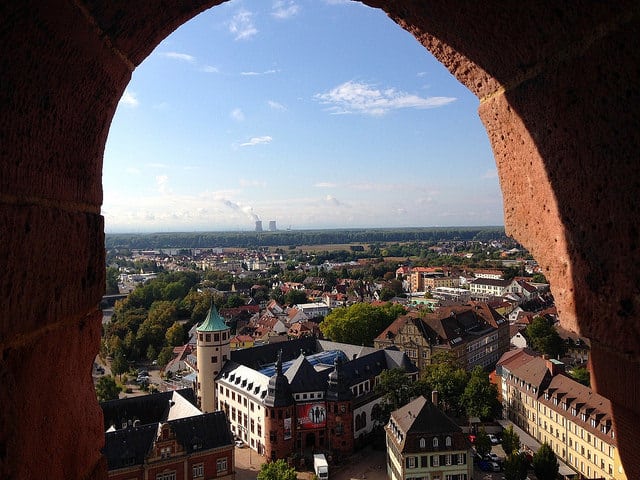 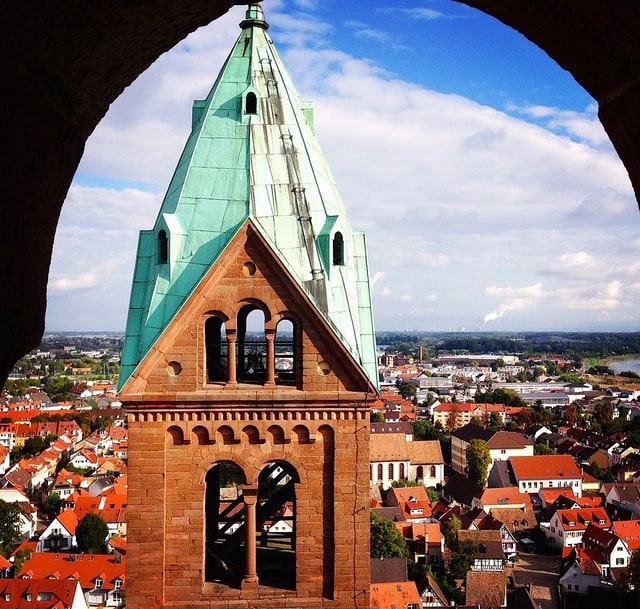 The cathedral is light and bright and airy inside and out, and with much less ornamentation than usual in these imposing Catholic basilica. Sometimes visitors touring Europe’s cathedrals are a bit disappointed at the lack of gold and treasure here. Me, I prefer its clean, uncluttered beauty. UNESCO likes it, too: the cathedral was added to the World Heritage list in 1981. Here’s the essence:

Speyer Cathedral, a basilica with four towers and two domes, was founded by Conrad II in 1030 and remodelled at the end of the 11th century. It is one of the most important Romanesque monuments from the time of the Holy Roman Empire. The cathedral was the burial place of the German emperors for almost 300 years. 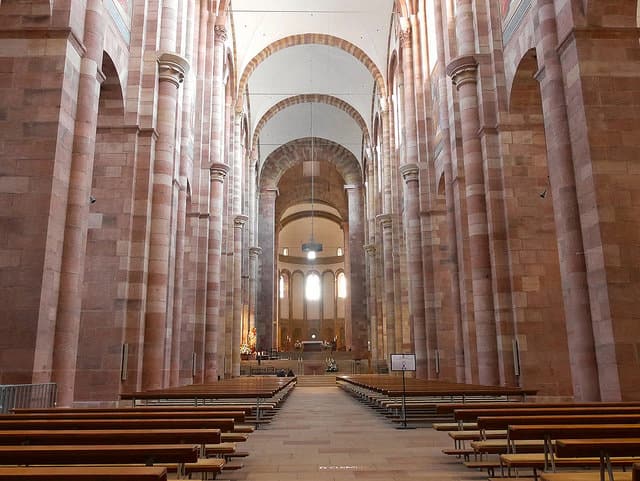 The Speyer Cathedral website has a slightly more dramatic presentation:

If my school German still serves, this translates about so:

The history of this cathedral is one of destruction and construction, of war and peace, of brilliance and misery. It reflects the history of Speyer Town, and even that of the entire region and of the state.

The state in this case is Rheinland-Pfalz, or Rhineland-Palatinate in English.

The construction of the cathedral was begun by Conrad II, and later expanded by his grandson, Heinrich IV. This was not without controversy.

Who did he think he was, this Emperor, insisting on both worldly and holy power? Even emphasising his assertion with such a magnificent structure in a tiny village? (Speyer at the time had only 500 inhabitants.)

And so began the so-called Investiture Controversy, a power struggle between the church and the state in the Middle Ages, which in turn led to years of civil war in Germany.

And Heinrich? So angry was the Pope with this disrespectful ruler, he was excommunicated. 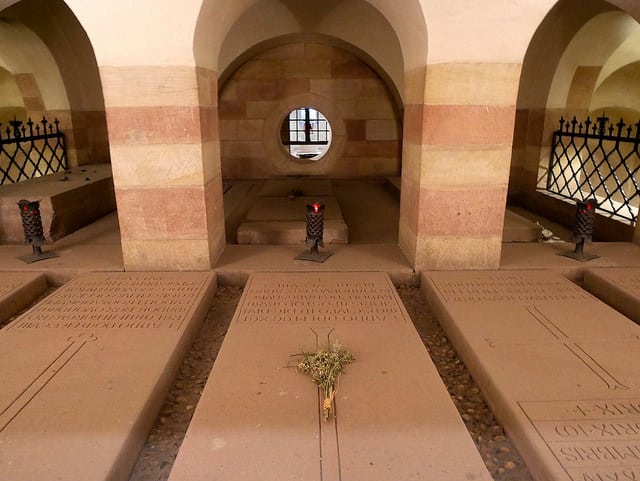 Other things to see and do in Speyer 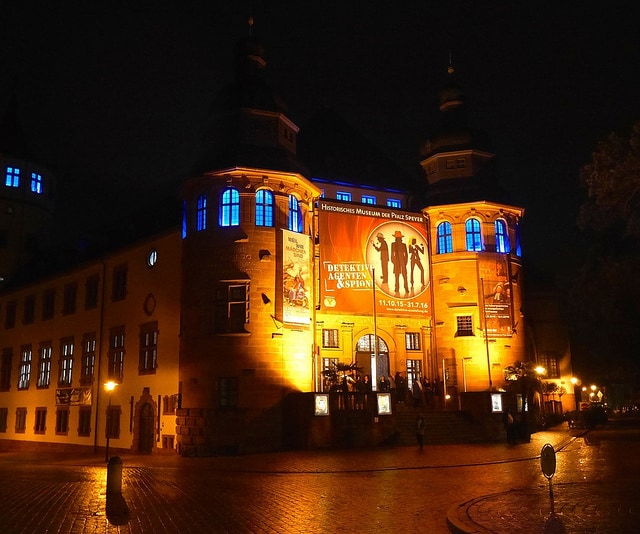 Speyer Cathedral is a UNESCO World Heritage site. Here are other heritage sites I’ve visited around the world.