There’s something magical about watching a city wake up. And if that city has an old medieval town, contained within a 1700-year-old royal castle, so much the better. Here in Split, in the middle of Diocletian’s Palace, it’s as if I’m watching 2018 waking up in ancient Rome. 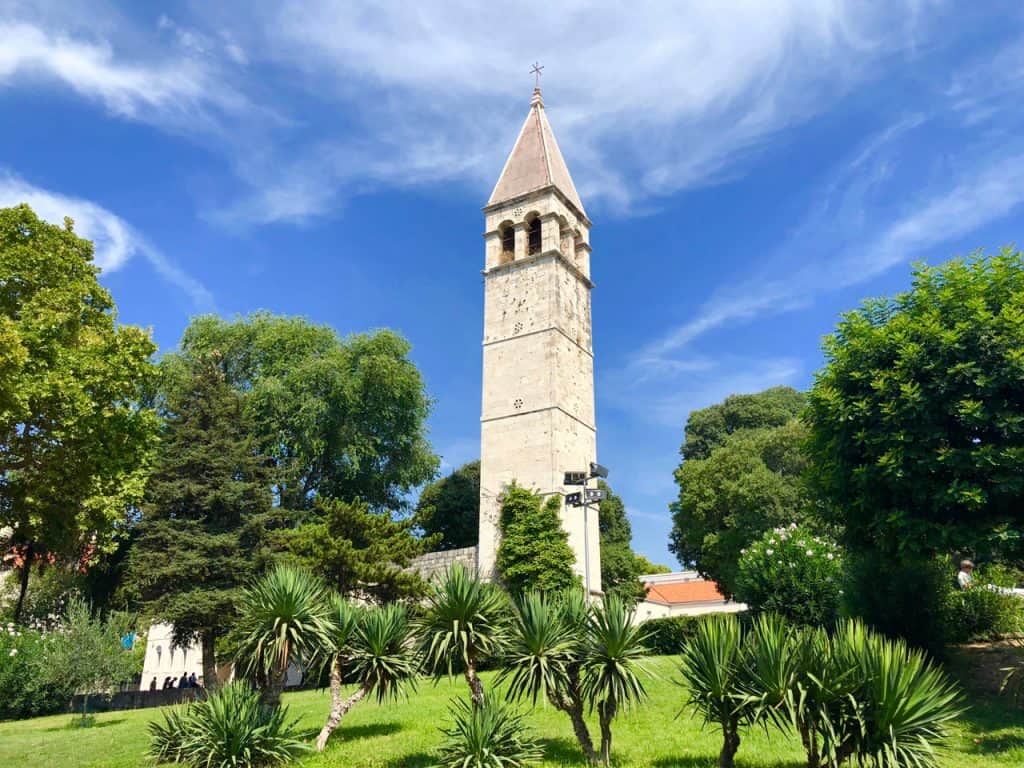 But who was this Diocletian, you may wonder. Or I do, at least. I don’t know much about this Roman emperor, except he wasn’t too thrilled with the new religion of his time. His relationship was with the ancient gods, Jupiter in particular; not with some new-fangled, new age claptrap (i.e. Christianity). Churches were razed, scriptures burned, the occasional cleric had his tongue cut out, another was whipped, had vinegar poured on his wounds, then slowly boiled to death on a gridiron. Brutal times. 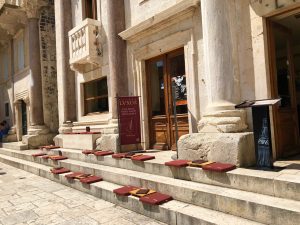 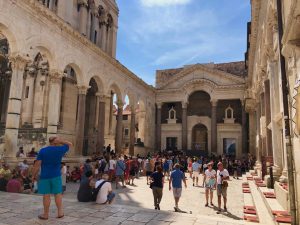 Diocletian came from a low-status family but rose through military rank. However, he wasn’t very happy in Rome, as he didn’t think the locals showed him enough respect. So, he left (offended presumably), and ended up back here in Dalmatia, land of his birth. Long story short, he abdicated, the only Roman emperor to do so voluntarily, and spent the last few years of his life at his palace here in Split. 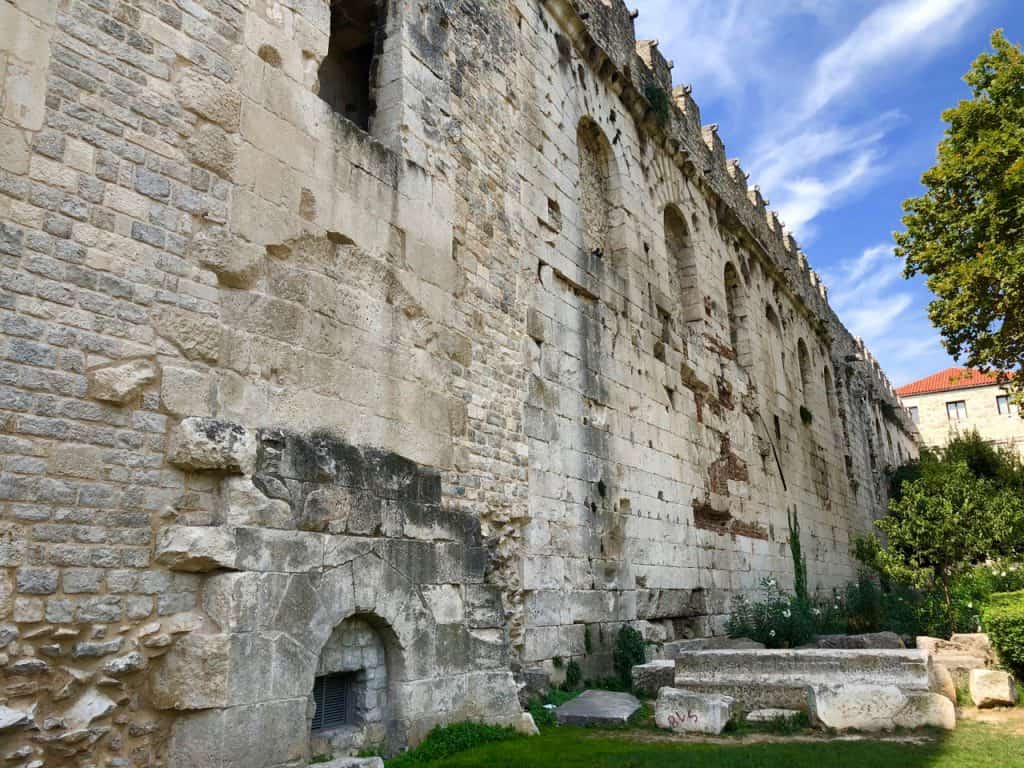 Looking at these two ‘Roman guards’ posing for photos with tourists, I can’t help but wonder what Dio would have thought of his sanctuary now. 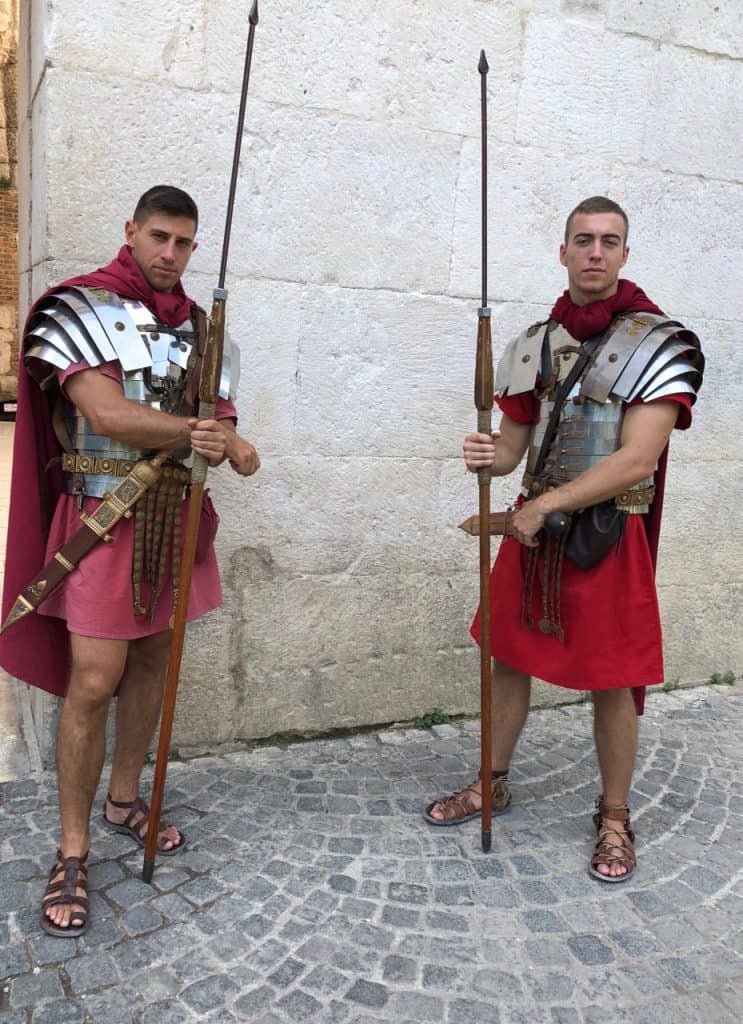 Split in August is not something I’d normally recommend. It’s crowded, with iphone-wielding visitors bumping into you, seemingly not even aware of you, whose only concern is getting yet another selfie. Then there’s the cacophony of incessant chatter in many languages, earsplittingly loud (funny how some seem louder than others).

But not in the early hours! Before the cruise liners and the day trippers invade, Split is pleasantly quiet. I hear birds chirping, fountains rustling, a little dog barking, a bicycle wheeling across the ancient cobble stones…

The markets, on the other hand, are hives of activity this time of day. At the seafood market, fish wiggles as it is put on the slab; that’s how fresh it is. I cringe, it looks cruel to me. But restaurateurs seem unaffected. They grab them quickly, and take them back to their work place, where the fish (by now, hopefully dead) will be prepared the way Baba (gran) taught them. In fact, Baba may very well be helping in the kitchen. And I must remind myself, despite my aversion this morning, I did enjoy a delicious grilled tuna just last night. 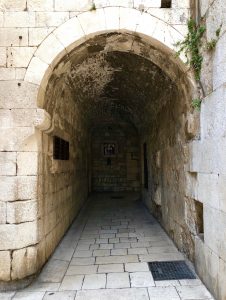 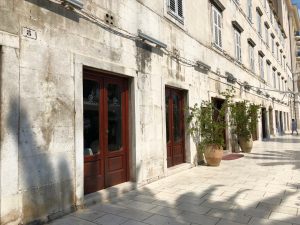 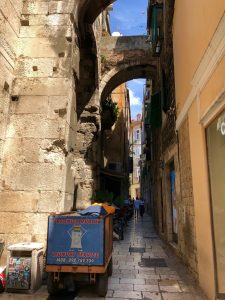 At the Green Market, fruit and vegetables are organised in neat piles: apples, oranges with green leaves still on, bananas, peaches, sliced water melon, and bunches of green grapes overflow tables covered in white paper. Large tomatoes, ripened by the warm Adriatic sun, taste like the sun itself. As do the luscious red strawberries, basket after basket filled to the brim. Potatoes are 5 kuna per kilo, clementines are 12. Red and blue striped parasols have yet to be opened. For now, the temperatures are pleasant.

Flowers of every kind and every colour dominate another section. A nun walks past under the yellow awnings: it’s as if she’s walking past a rainbow.

Getting here before hours is easy for me. All it takes is getting up, then walk across the street – one minute, tops – and I’m at the entrance to Diocletian’s expansive palace, which is also the entrance to the whole town. 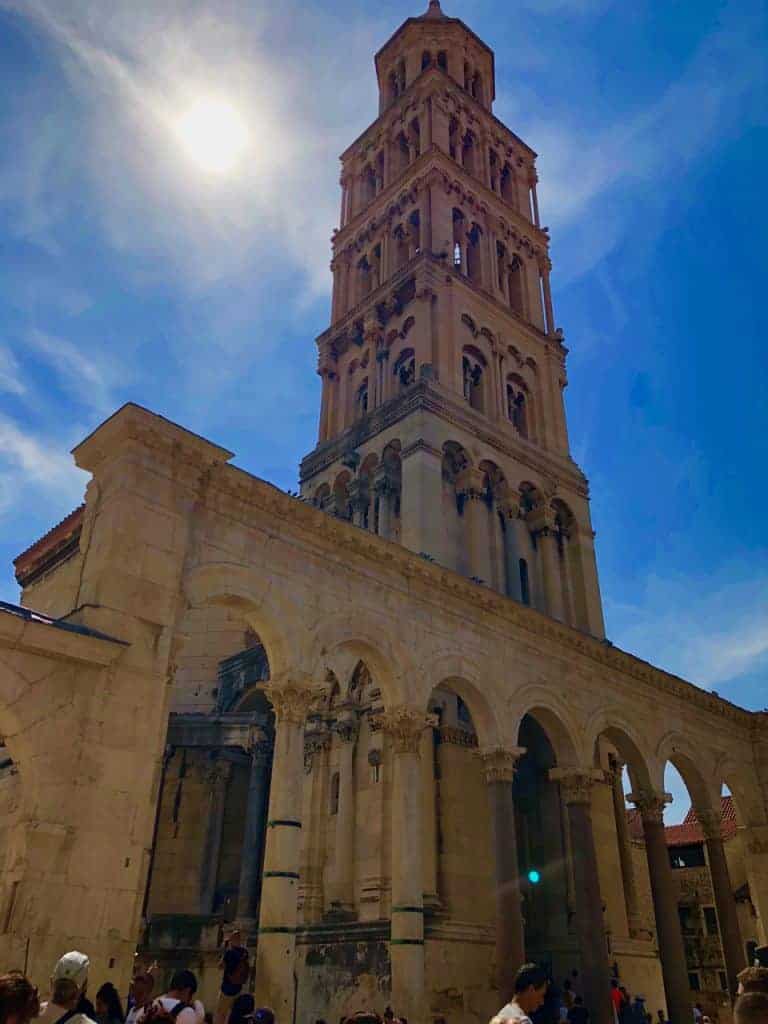 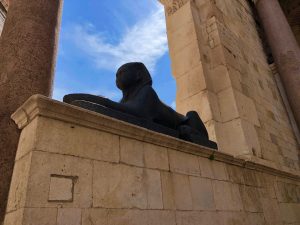 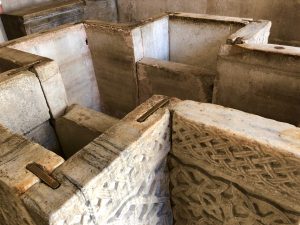 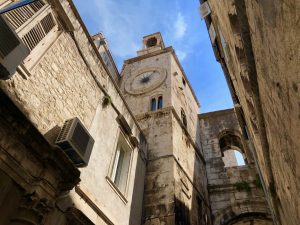 In the quiet morning, I cross the Peristilium to have a look at the cathedral and the black sphinx Diocletian brought in from Egypt. I walk along the narrow street, enter the Temple of Jupiter with its lovely baptism font shaped like a cross (what would Dio have thought?), then Narodni Trg – The People’s Square – with the famous 15th century astronomical clock. I wander through another square, then past a stairway where a cat is waking up, slowly stretching. 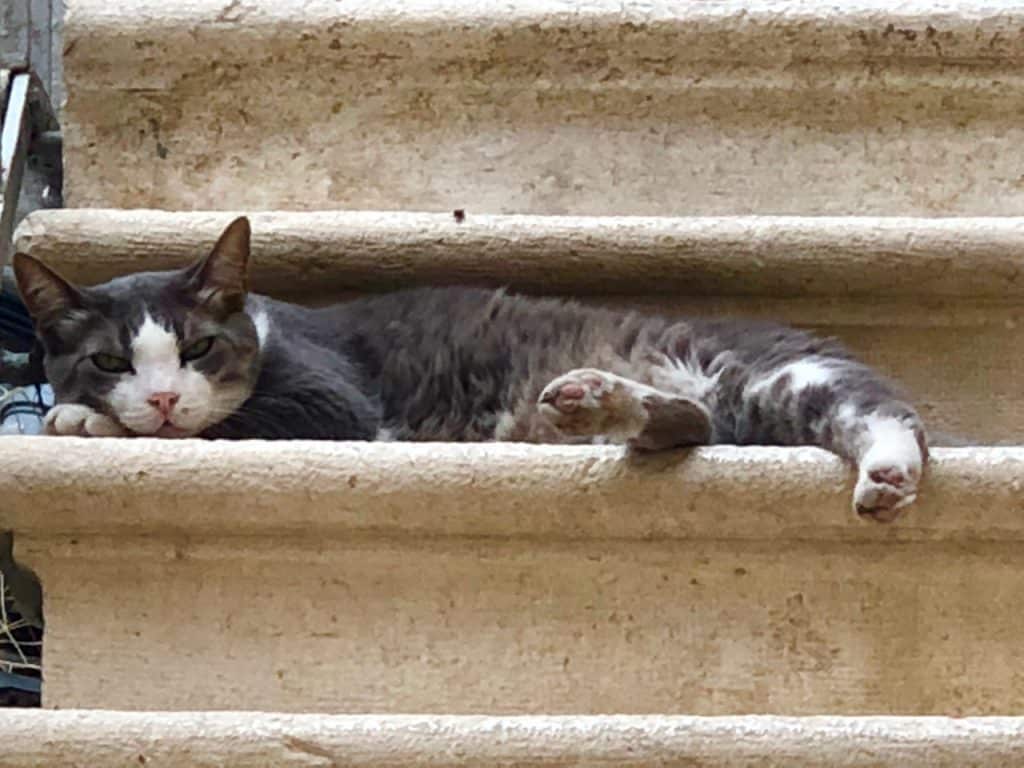 On the next little square, I’m offered coffee in a café that hasn’t opened yet. At the restaurant next door, a waiter is putting out bright red cushions; another raises the awnings in anticipation of yet another 33° degree day in Croatia’s second city. 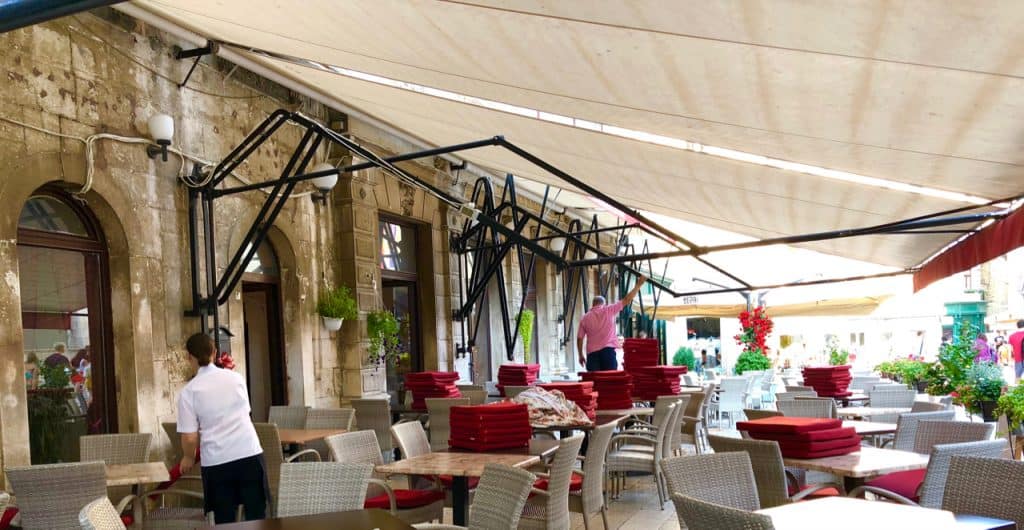 Later today, I’ll be here again – far from alone. But for now, I’m slowly sipping coffee watching Split come alive. At first, there’s only me and more fruit stalls. Then, a woman walks her unruly, happy little dog across the square, and a lone tourist sits down at the base of a statue with his phone. 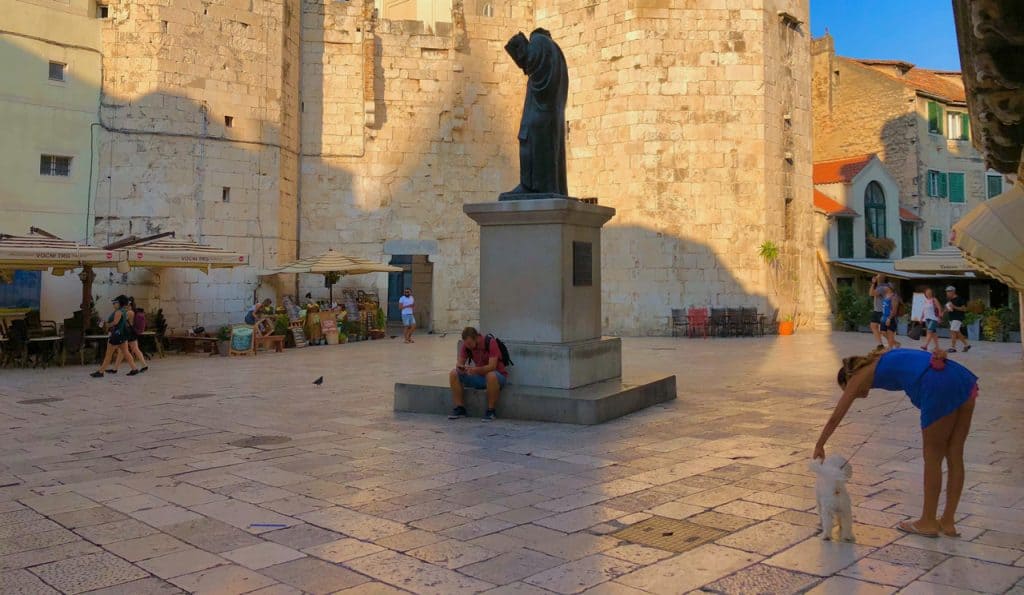 A boy scrambles along in a little covered van, delivering bottles to the restaurants; (surely, he is far too young to drive…?) Another dog appears, leading a middle-aged man whose nose is buried in his phone. I wait for him to take a tumble, but he’s surprisingly aware. A group of French girls are on their way to the beach, then two Americans. Before I know it, Split’s old town is again swarming. Time to run away. Out to sea. 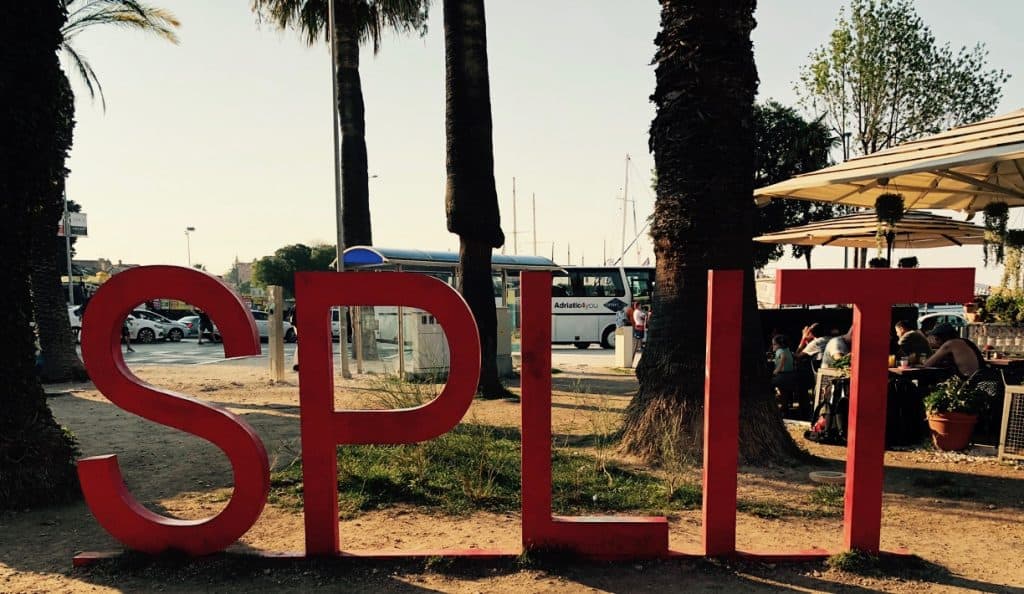 Historical Complex of Split with the Palace of Diocletian is a UNESCO World Heritage site. Here are more heritage sites around the world.