Between Ajman and Dubai lies Sharjah, the third largest emirate – and perhaps the third best known, as well. Sharjah is also the most conservative emirate: alcohol is completely forbidden, dress codes are strict and no mixing of men and women if unwed. Not even a sheesha cafe to be found.

Despite those rather medieval policies, my first impression was favourable. Sharjah seemed much livelier than Dubai. Lots more people out and about. After being bored in Ras Al-Khaimah, Umm Al-Quwain and Ajman, my daughters were pleasantly surprised and stopped grumbling. 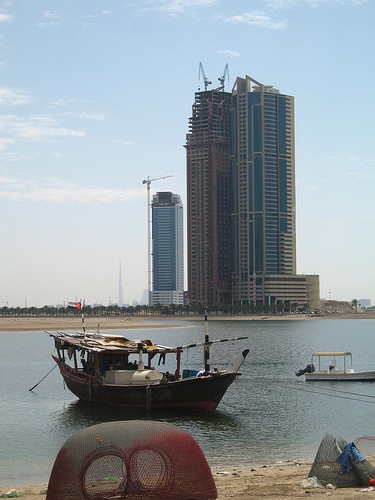 Many of Dubai‘s workers choose to live here, as cost of housing is about one third of that in Dubai. If you’re visiting Sharjah, Hindi or Urdu would be more useful to know than Arabic, I think. Surprisingly many residents of both Sharjah and Dubai that we met didn’t speak Arabic, even after having lived here for 10 or 15 years!

All the emirates have mosques, of course, but the ones I saw in Sharjah were among the prettiest. Sharjah also has a pleasant promenade along a bay with a cool cityscape across the water.

The UAE is a good base for exploring not only the Arabian Peninsula, but also Iran, Iraq and the fascinating countries of Caucasus and Central Asia, all high on my travel wish list. So I’ll undoubtedly return – and when I do, I think I might like to stay in Sharjah for a few days. And maybe take in a few of the 16(!) museums. 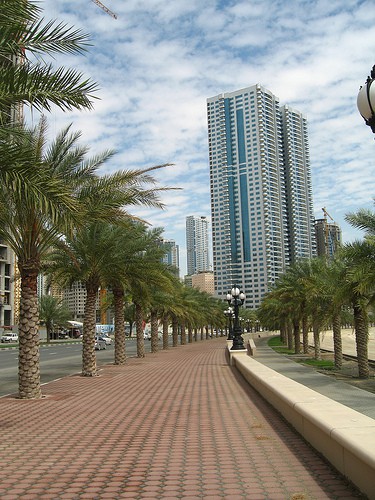 We only stayed in Sharjah a few hours, and this post is but a glimpse and first impression.