I’ve been meaning to write about stave churches here on Sophie’s World for a while now. Years, actually; but waiting until I had seen the oldest of them all: Urnes. Somehow, I thought that one was needed.

Well, in this corona-dominated summer – or early autumn rather – I finally got around to it. So here you are: one of the typical picture postcard images of Norway, and rightly so: 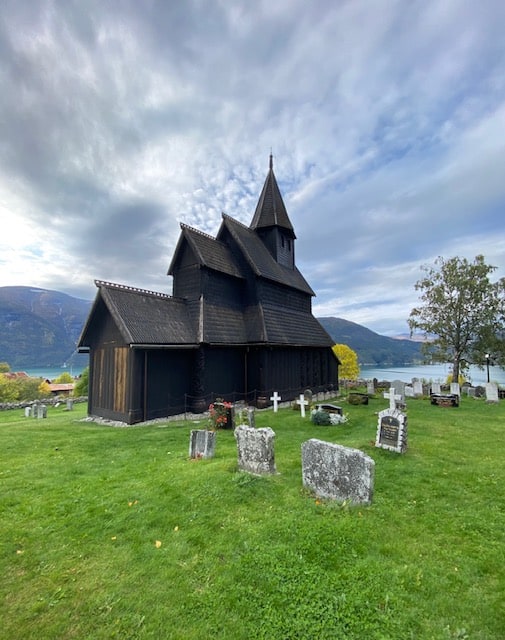 But first: Why this focus on churches from someone distinctly non-religious?

Simple: churches are interesting because they say lots about society, customs, power and politics through time.

Stave churches are especially interesting, I think. Because of their age, and because they were built according to traditional construction custom, using materials from the surrounding area (and not decorated with gold and riches stolen from occupied lands.)

Perhaps also because they tell a story about my ancestors, my great x 35-grandparents and their crowd. A story of good and not so good, as you’ll see towards the end here.

I like to think Vikings hung out in these churches, worshipping – or probably rather “worshipping” – the new guy in town. Christianity was forced upon society, and I suspect many still preferred the Norse gods to this strange new thing from the Middle East.

Some, I imagine, were here to commune with Jesus, while others chatted quietly and in secret with Odin, Freya, Thor and the rest of the good old gods. Yet others again were probably here just to catch up with friends and neighbours and the latest gossip about who did what with X when Y was away, spreading his genes on the British isles and discovering America. 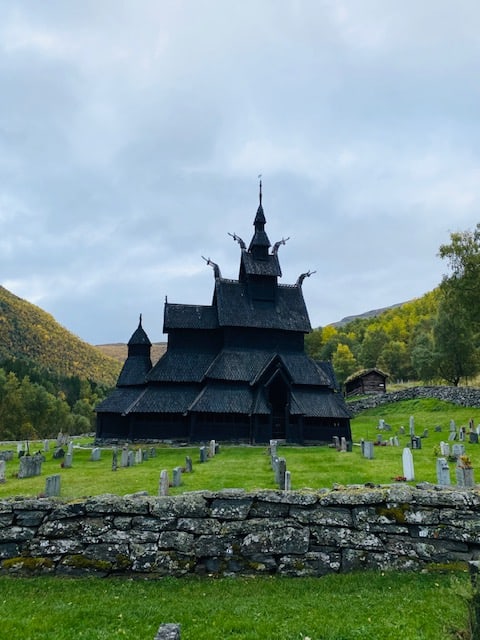 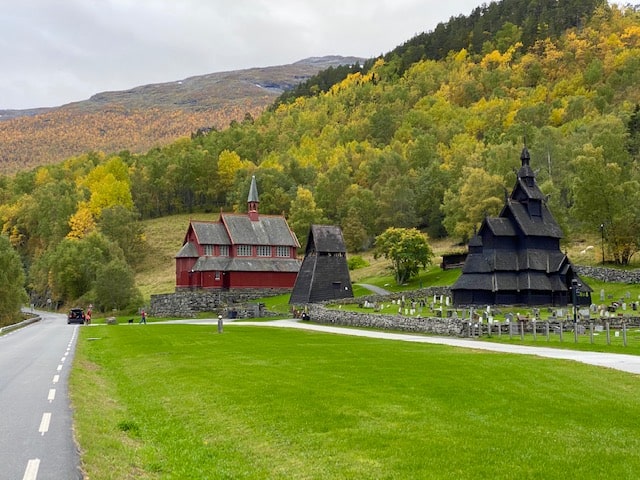 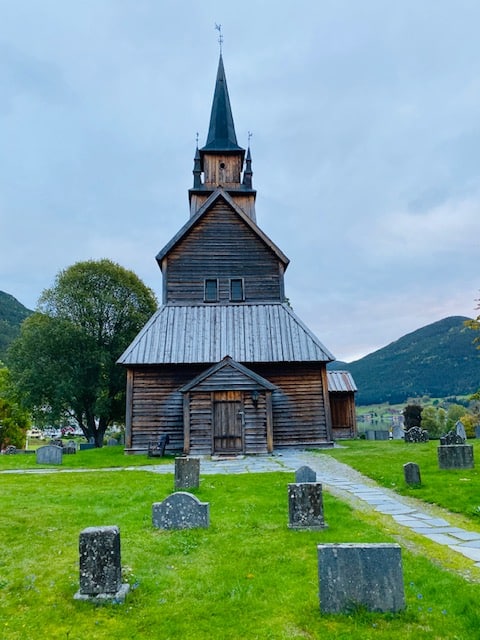 Two other stave churches, just for a bit of variety. From left to right: The elaborate Borgund stave church with the classical dragon heads, Borgund again with the free-standing tower next to it, and the much simpler Kaupanger stave church. Like Urnes, they’re both in Vestland County, near Sognefjord.

But Alexandra says a firm and steady no. No to the Vikings, that is.

These fierce Norsemen did not attend mass or gossip in stave churches, she holds, simply because the Viking Era ended with the emergence of that new-fangled religion. With Christianity came the Dark Ages, i.e. the Middle Ages.

And since she has a nearly finished degree in archaeology, I may have to defer to her superior knowledge in this area. Don’t tell her I said that, though. Wouldn’t hear the last of it.

Of those, 28 remain standing, spread around the country; solid, durable buildings. Some are large and imposing, others are tiny, little things.

Technologically, these churches were advanced constructions for the time. They were built like basilicas, but made entirely of wood. Norway, after all, abounds in tall, sturdy trees.

The biggest stave church is Heddal (in Notodden in Telemark, about 1.5 hours west of Oslo), the best preserved one is Borgund, and the most visited one is probably Gol (in the Cultural History Museum in Oslo).

In this post, we’ll focus on the oldest one. 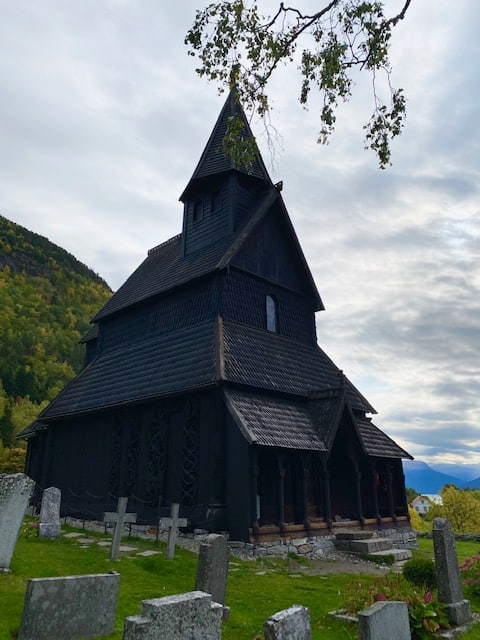 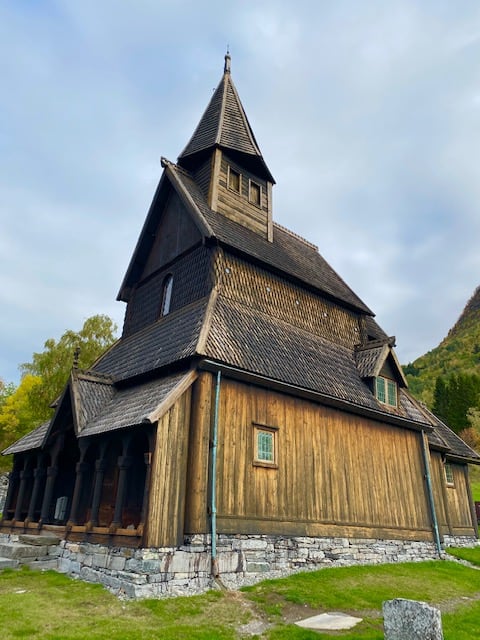 This is Urnes stave church, dedicated to Saint Andrew.

Notice the colour? Black on one side, light brown on another? Almost seems like two different churches, doesn’t it? Built of locally sourced pine, it’s tarred every 4 – 5 years, to saturate the woodwork, fill in holes and prevent moisture and rot to set in. This goes a long way to explain why they’ve lasted for centuries. Even so, it fades unevenly – sun, weather, etc, hence the different shades of tar. I like the smell of tar; memories of the boat houses of my childhood.

From 1130, Urnes is the oldest stave church still in existence. But there’s more. This is church no. 4 on this spot. Remains of three even older ones have been found underneath. The youngest of the three is from ca. 1070 – these wood carvings have been preserved from church no. 3 and incorporated on the northern wall. 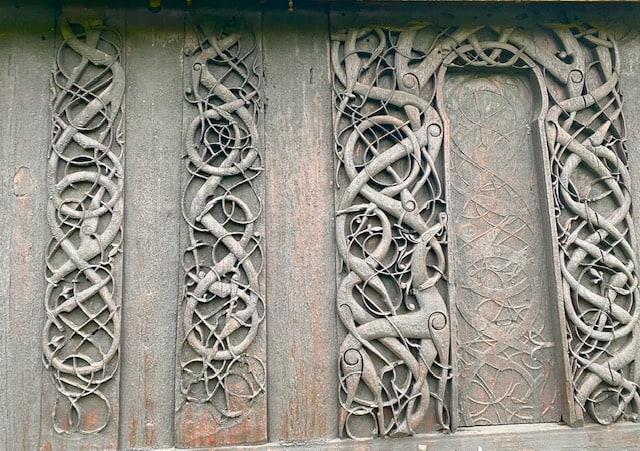 Known as the Urnes style, the carvings looks heathen, but it is thought it may have had a Christian significance.

See the animal? That’s a lion, they say, those in the know. (Yes, I know. It takes a bit of imagination.) It is thought that the lion symbolises the good, i.e. Christ.

Hm… I don’t know. I’m certainly no archaeologist, or interpreter of religious symbolism. But I rather prefer the idea that the lion symbolises well, a lion. Seen by Vikings on their travels (there’s evidence they did reach Africa), and the image brought home. The oldest traces found underneath here, is church no. 1, a mid-900s post church. Post churches were built with the posts dug into the earth and were the forerunners to the stave churches. 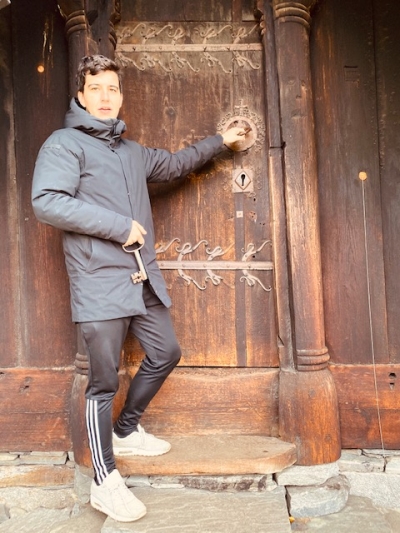 Oscar shows me around. He is practically an encyclopaedia of Urnes’ history – and its wealth of stories. 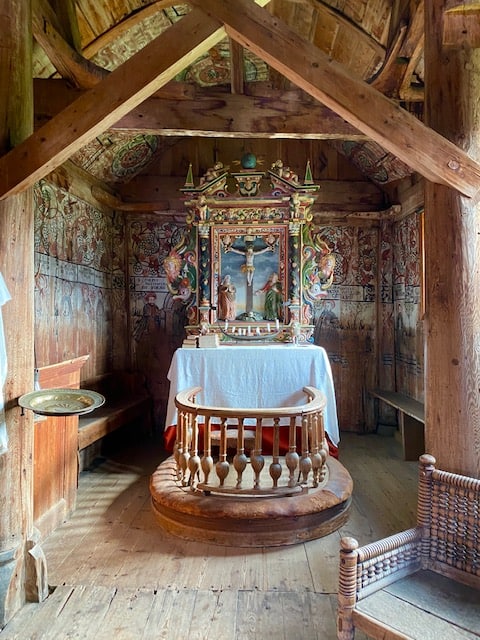 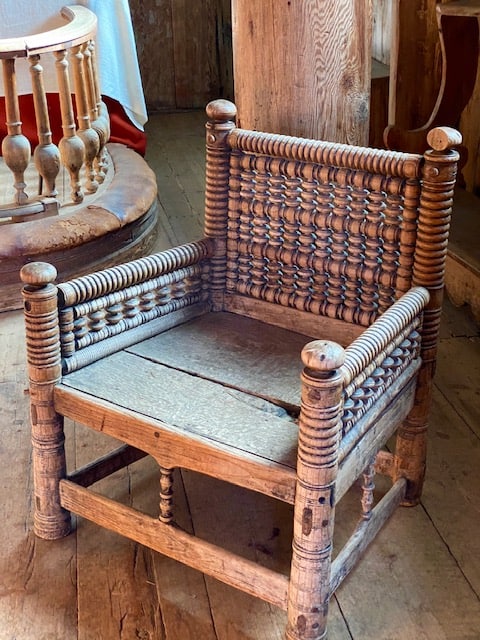 Back in the present, I’ve gone inside the church.

As you can see from the top photo, the location in stunning. And Urnes is beautiful inside as well. Just look at this nave. And that chair is from ca 1150. An 850-year-old chair!

During the first century of its existence, the church was used by the local chieftain and his family. Knowledge was something exclusively for the elite, and having a private church was a status symbol. From 1250, though, this changed. Urnes became the parish church. For everyone.

Today, the church is used mainly for christenings and funerals for the locals in the village of Ornes (about 25 – 30 souls). Additionally, there are three services pr year, open to everyone. It is possible to rent the church for weddings. There’s room for 40-50 people inside.

During the 1950s, gold and silver coins were discovered underneath the church, some from Turkey and North Africa, dated from the 11th century onwards. The coins came from trade, from taxation of local farms, sale and lease of land, and fjord tolls collected for the chieftain. Tolls had to be paid for all traffic on the fjord: fishing boats, merchant ships, private vessels, etc.

I promised you a rant. Here it is. See the cage here? 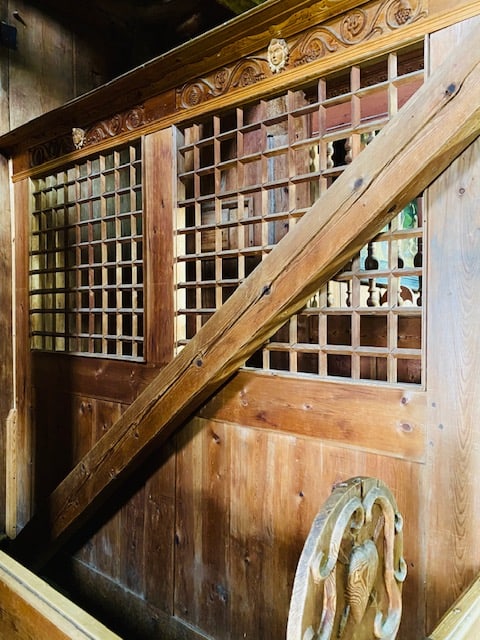 There are three of them: one for the local chieftain’s family, one for the poorer souls in the community, and one for unwed mothers, so they could hear the service whilst not being seen, the disgrace that they were. Never mind the children’s fathers being out in the congregation, very much seen.

But let’s take a closer look through the bars here. Do you see the little sliding window?

Let’s pop inside for a closer look. 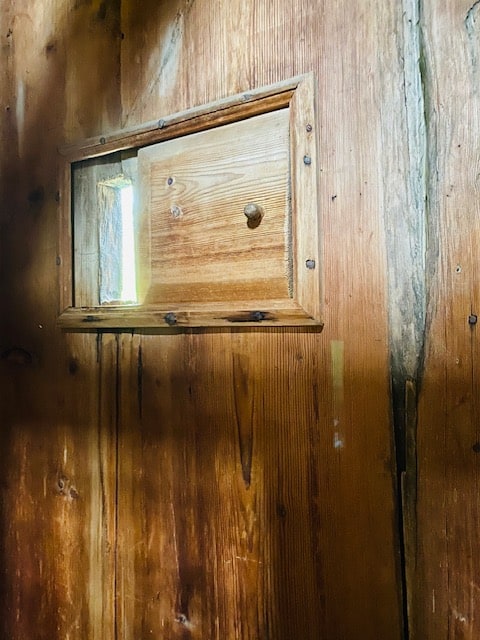 This window was for those even worse off, the ones who couldn’t enter the church.

This way, they could receive the priest’s blessing through the hole in the wall – without spreading disease or dishonour/defile the church.

“They” included people with contagious diseases, which makes sense, I think. They also included criminals; a certain justice in that too, perhaps. And – here’s the kicker: menstruating women! Women on their periods. Considered unclean!

Where do such backwards ideas come from? Were they simply unaware – those folks in medieval times (and worse, those religions that hold such distorted views even today)? Did they not understand that if it weren’t for menstruating women, they simply would not exist? Not one of them. Not one of us.

By rights (and by logic), they should be revered. The future of the human race depends on women of childbearing age. With that kind of power, why have women put up with this shit through the ages? A complete mystery to me.

But enough politics. (For now.) I’ll end this on a lighter note, and share this view with you, out the church door! Almost enough to make you religious. Almost. 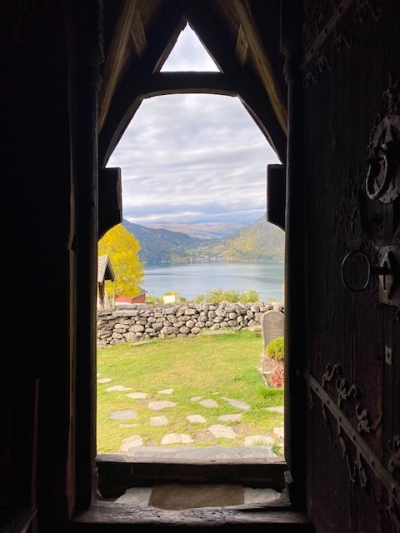 Urnes stave church was added to UNESCO’s World Heritage list in 1979, as the first property in Norway. 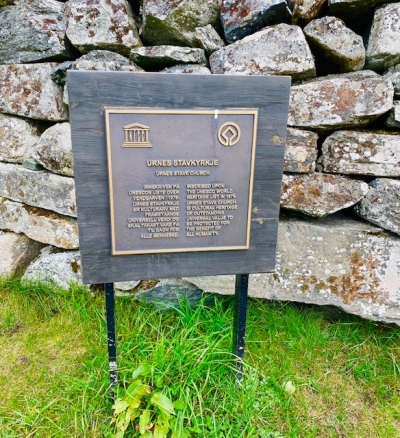 The wooden church of Urnes (the stavkirke) stands in the natural setting of Sogn og Fjordane. It was built in the 12th and 13th centuries and is an outstanding example of traditional Scandinavian wooden architecture. It brings together traces of Celtic art, Viking traditions and Romanesque spatial structures. Urnes Stave Church is situated on a promontory in the remarkable Sognefjord on the west coast of Norway.

Urnes is not the easiest of sites to reach. You really do need a car. The nearest airport is Sogndal, where you can hire a car. The journey also requires a short stint on a ferry, as is the case all round in Western Norway. You want to leave yourself plenty of time.

You can enter the church with a guide (100 NOK in September 2020). Contact [email protected] for current opening times.