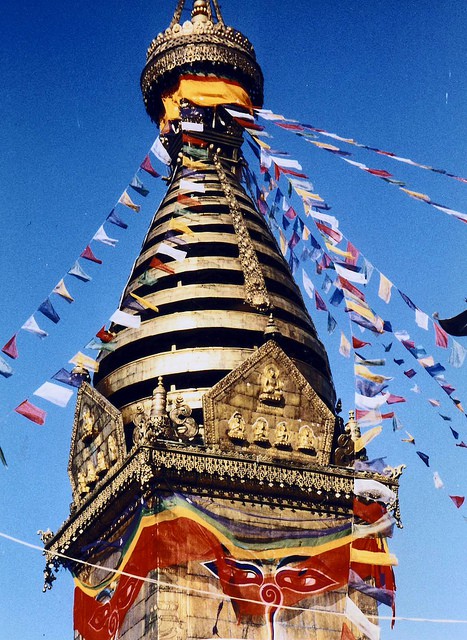 This week’s #FriFotos theme* is holy places. My choice of holy place today is Swayambhunath stupa, Kathmandu. Along with six other groups of monuments in the Kathmandu Valley, the temple was inscribed on UNESCO’s World Heritage list in 1979. It is first and foremost a Buddhist shrine, but also important in Hinduism.

Since holy monkeys live here, it’s also known as the Monkey Temple. And what makes these monkeys holy? I’m glad you asked. This gives me an opportunity to point out yet another similarity between Nepal and Norway. Not only do both begin with N, not only are they both very mountainous countries. But they’ve also both had rulers slightly obsessed with their hair!

In Norway, 9th century Viking king Harald Fairhair refused to cut his hair until all of Norway was joined together in one kingdom. And in Nepal, Manjushree, the bodhisattva of wisdom, didn’t cut his hair until he had finished building the Swayambhunath temple hill.

Hygienic conditions couldn’t have been the best, because he got head lice. But here comes the interesting part: Manjushree’s lice, you see, they magically transformed into monkeys.

The monkeys are still here. In droves. And some quite aggressive. Although one of the young ones was a sweet little thing: hopping about on the railings, he (or she) followed me all the way up the stairs and insisted on grabbing my hand over and over. Adorable at first, annoying after a while…

To get updates on Sophie’s World, go to our Facebook page.

*#FriFotos is a weekly Twitter chat founded by @EpsteinTravels where travellers share their favourite photos. Each week has a different theme. Search #FriFotos on Twitter to see more or to join in.

The Swayambhunath stupa is part of the UNESCO World Heritage site Kathmandu Valley.