A taste of New Orleans

We don’t often do restaurants reviews here on Sophie’s World. I’ve had heaps of sumptuous meals, but I find that one is often quite like another. I’ll also admit, it isn’t one of my major interests – unless it’s something curious or exceptional, like the little restaurant in Geneva that has only one item on the menu – or cooking outdoors, whether it’s pizza in the Italian countryside or lunch in rustic Mallorca. 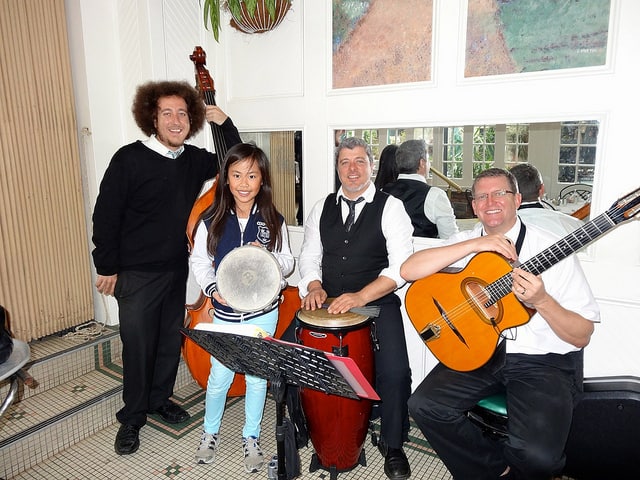 In New Orleans, food and music goes hand in hand

During our recent visit in the Crescent City, we were given ample opportunity to taste some of New Orleans’ offerings. I was pleased to discover food that’s truly unique, and completely unlike anywhere else. But don’t just take my word for it. In a recent interview, celebrity chef Anthony Bourdain chooses New Orleans as the top food destination in the USA.

The New Orleans CVB hosted our stay in town and they sent us off to sample a variety of cafes and restaurants. Others we either stumbled upon, or were recommended by random, friendly locals. In one case, we were simply intrigued by the long queue outside on a cold and rainy day. Some we liked, others less so. Here are our five favourites: 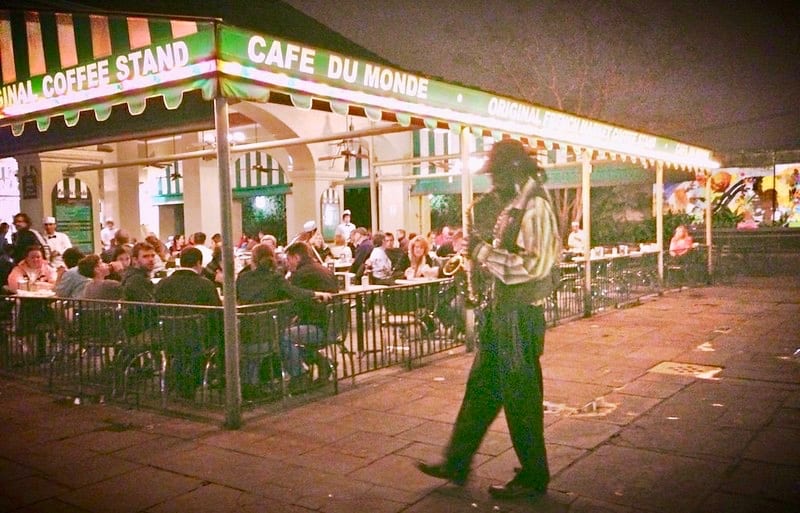 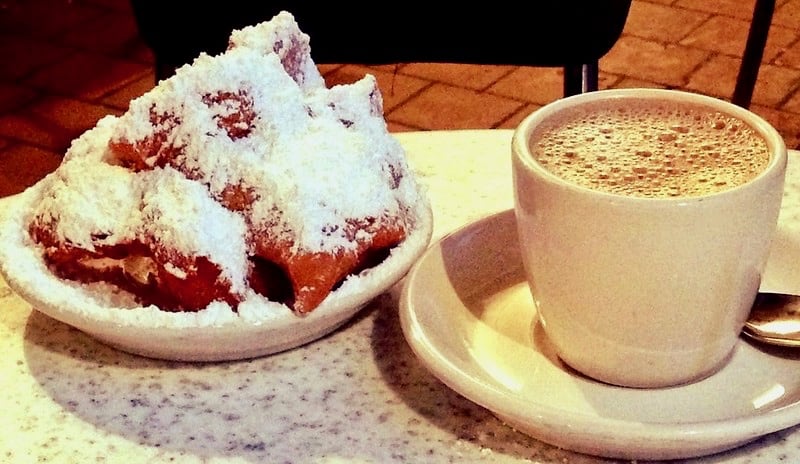 Having coffee and beignets at Cafe du Monde is a must-try New Orleans experience. This iconic cafe is from 1862, open 24/7 and located in the French Market. You don’t come here for the extensive menu, in fact, the menu fits at the side of the serviette holder, and contains essentially one thing: beignet, a fried piece of dough, overflowing with powdered sugar. Beignets are served in orders of three – and luckily we were three, because one of these sweet dough squares is just enough. The coffee is plain black or cafe-au-lait, creamy New Orleans-style. No skimmed milk option here. 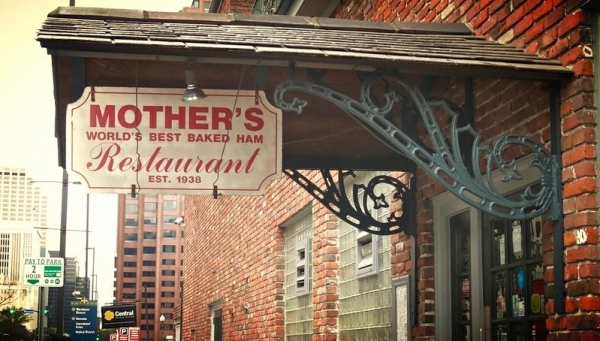 In an old brick building on Poydras Street, Mother’s is one of New Orleans’ most famous restaurants – and has been since they opened their doors in 1938. We were invited for breakfast here on our first morning in town. 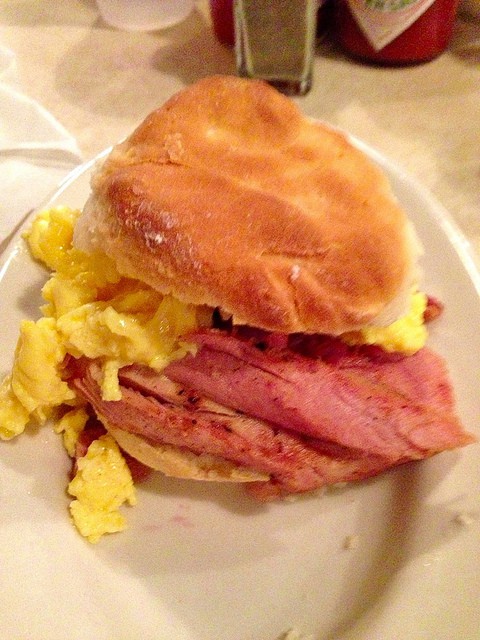 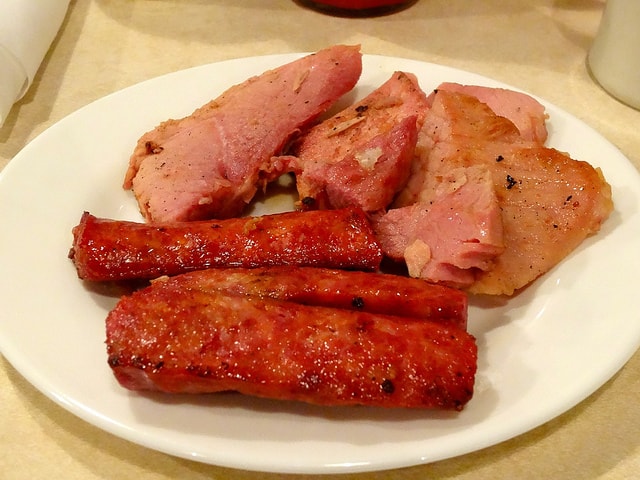 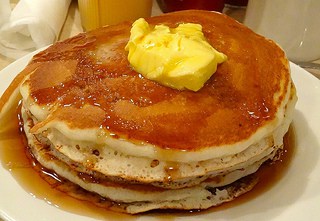 The speciality, as you might have gleaned, is baked ham – world’s best, no less – so naturally we had to give it a go. Cat, the most non-veg of us was given the task of sampling this delicacy. She ate and ate, the little one, but still had heaps left on her plate. Alex had pancakes, and struggled with her portion as well. I had biscuits (the American version, similar to a scone) with scrambled eggs and the noted ham. Everything tasted very good, but we were a bit overwhelmed by the portions. Could be the jetlag, of course. 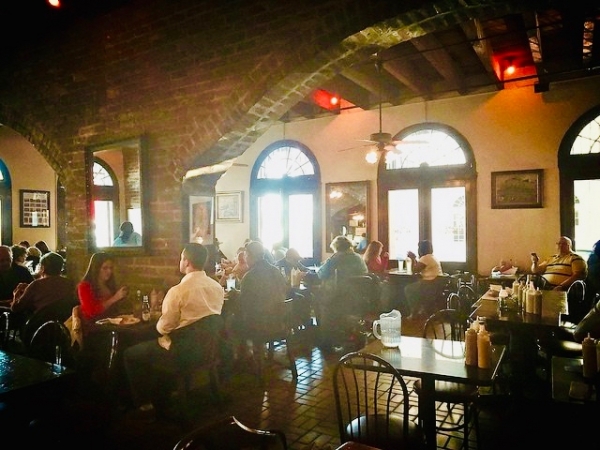 Cafe Maspero is located on Decatur Street in the French Quarter, and this is where we were drawn to the queue outside. Maspero is very budget-friendly, which goes some way to account for its popularity, I expect. We sampled more typical New Orleans fare: a po-boy and a muffaletta filled with ham, salami and pastrami, a vegetarian’s nightmare if ever there was one. Fortunately, there was also a vegetarian Muffaletta on offer. All tasty. All huge. 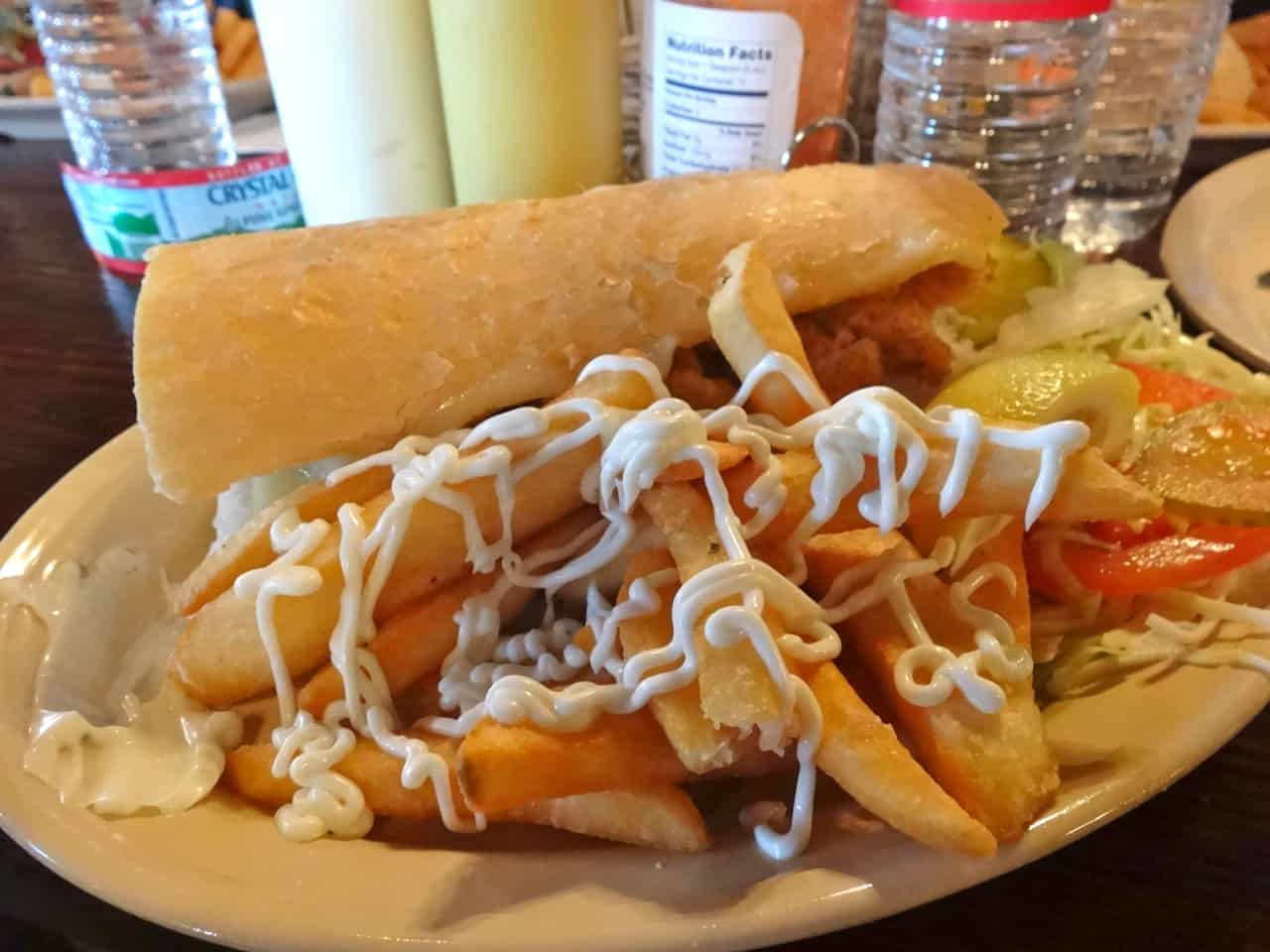 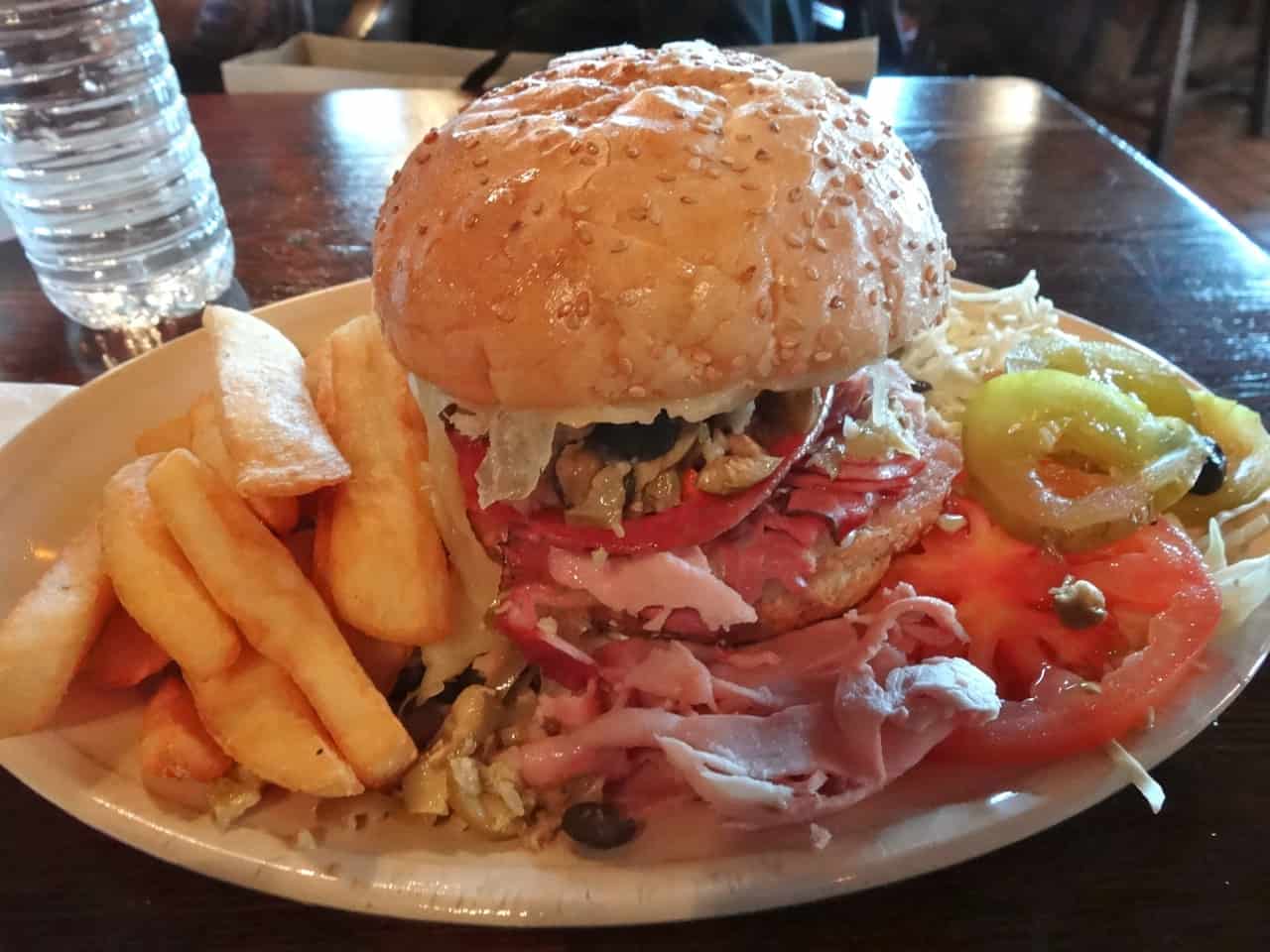 With high, arched ceiling and tile floors, it felt like being in a cellar, very atmospheric. And as with many buildings in New Orleans, this one comes with a dramatic history: this was once an auction house for slaves, The Maspero Exchange.

2. The Court of Two Sisters 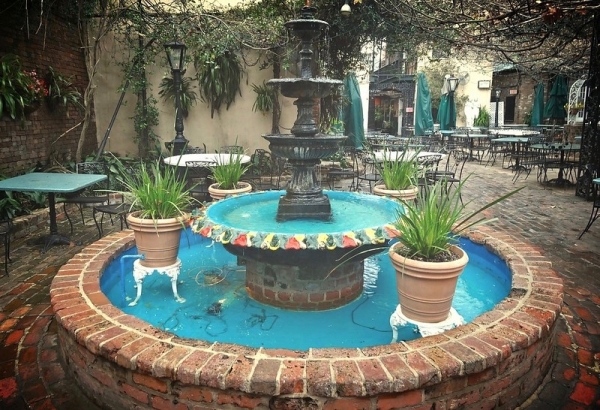 At The Court of Two Sisters, we were invited for a weekend jazz brunch. I loved the atmosphere here: a magical garden, very old world, very Creole – indoors and out, with soft jazz playing in the background. Sadly, it was too cold and rainy to be outside. The garden must be a perfect place to linger for hours over coffee. 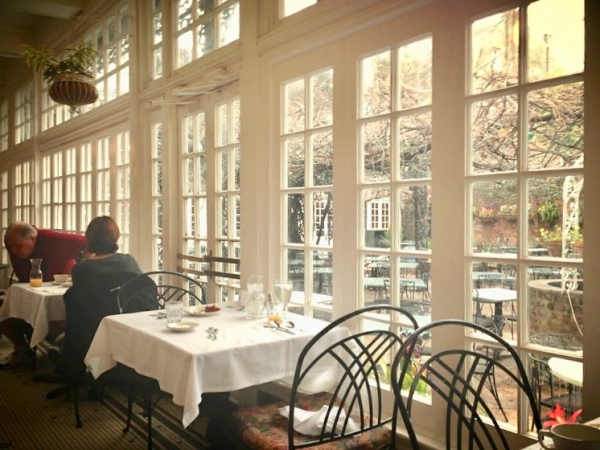 I’m not normally very keen on buffets. Heaping salads and fish and meat and cheeses together on one plate isn’t my idea of a nice meal – which means I have to go back and forth lots. Frankly, it’s a hassle. 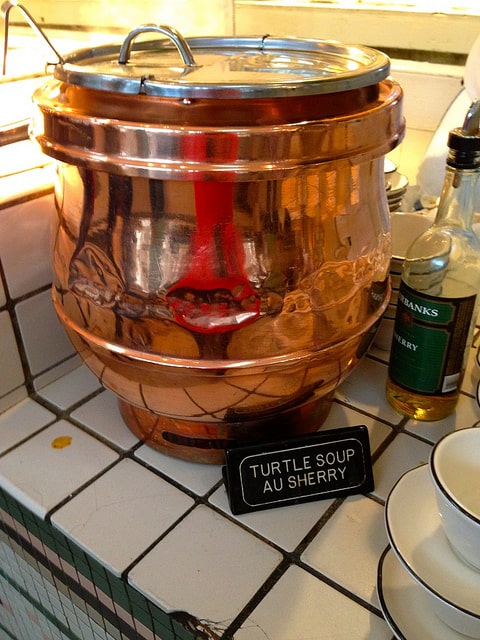 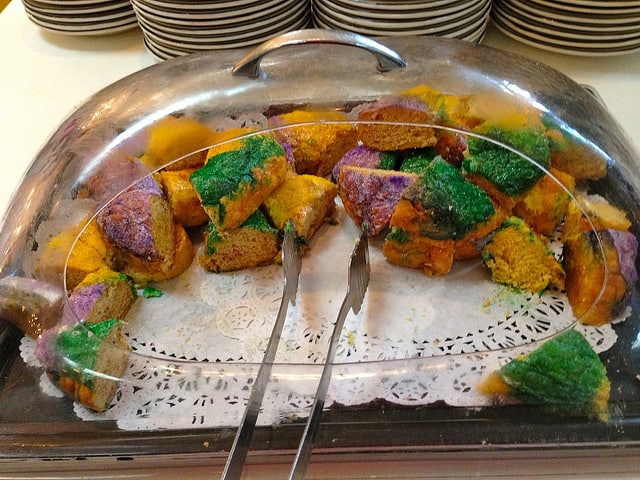 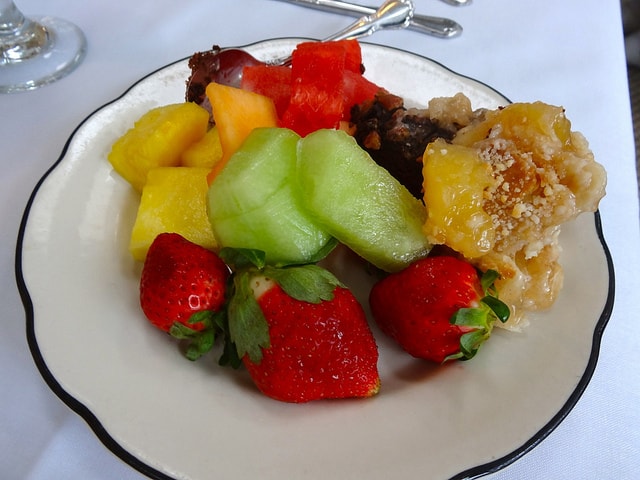 However, this buffet was so interesting and full of colours and flavours that I didn’t mind one bit. Sweet, salt, healthy – the Court of Two Sisters serves everything. In addition to all the traditional breakfast dishes, there were Creole omelets, grillades and meats, chicken & andouille gumbo, grits, glazed sweet potatoes, turtle soup au cherry, fresh fruits, Bananas Foster, King cake and heaps more. And a boat loaded with sea food. 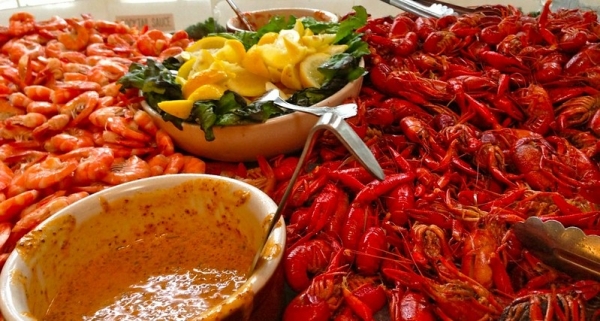 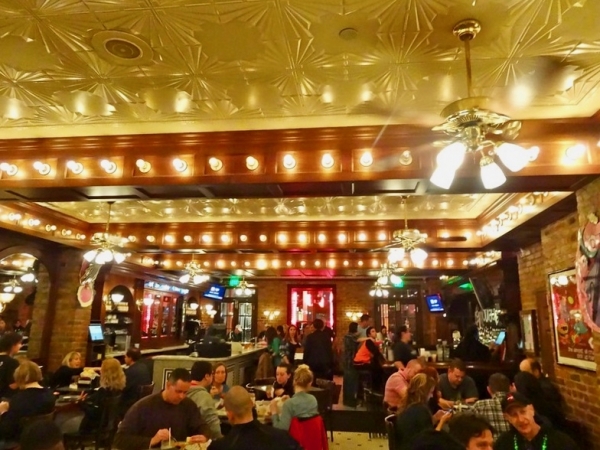 Remoulade is located on Bourbon Street. Must admit to feeling skeptical when I discovered that. After all, Bourbon Street is… well, Bourbon Street. Not the most child-friendly place to be on a Saturday night. But once inside, the seedy street was forgotten. Remoulade has a cosy, warm and glowing atmosphere, inviting people to chat (but not too loudly).

Remoulade is the informal little sister of the famous Arnaude’s right around the corner. A big thumbs up for service here. We had reservations for 7pm. Alex had visited plantations () and didn’t make it back to town until nearly 8. Meanwhile, Cat and I took up a table, talking, playing Yahtzee and sharing a plate of yummy N’awlins Nachos. The place was crowded, so I would have expected the waiters to be a bit impatient with us, but instead we received top-notch service with just the right amount of attentiveness (too much is just as annoying as too little). 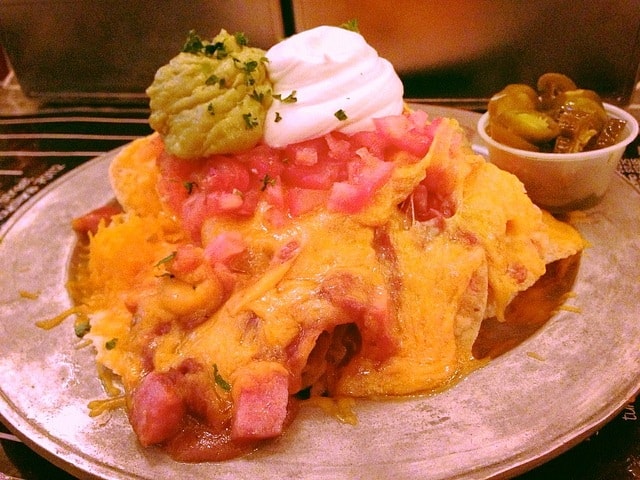 When she finally arrived, we ordered our mains. Alex had blackened catfish, served with potatoes and spices. Today, more than two months later, she still remembers the meal fondly. Cat went for a traditional cheeseburger and I had my first Jambalaya, with lovely prawns, chicken, andouille sausage, honey baked ham, vegetables and rice, spices and a delicious creole sauce. Portions were just the right size. 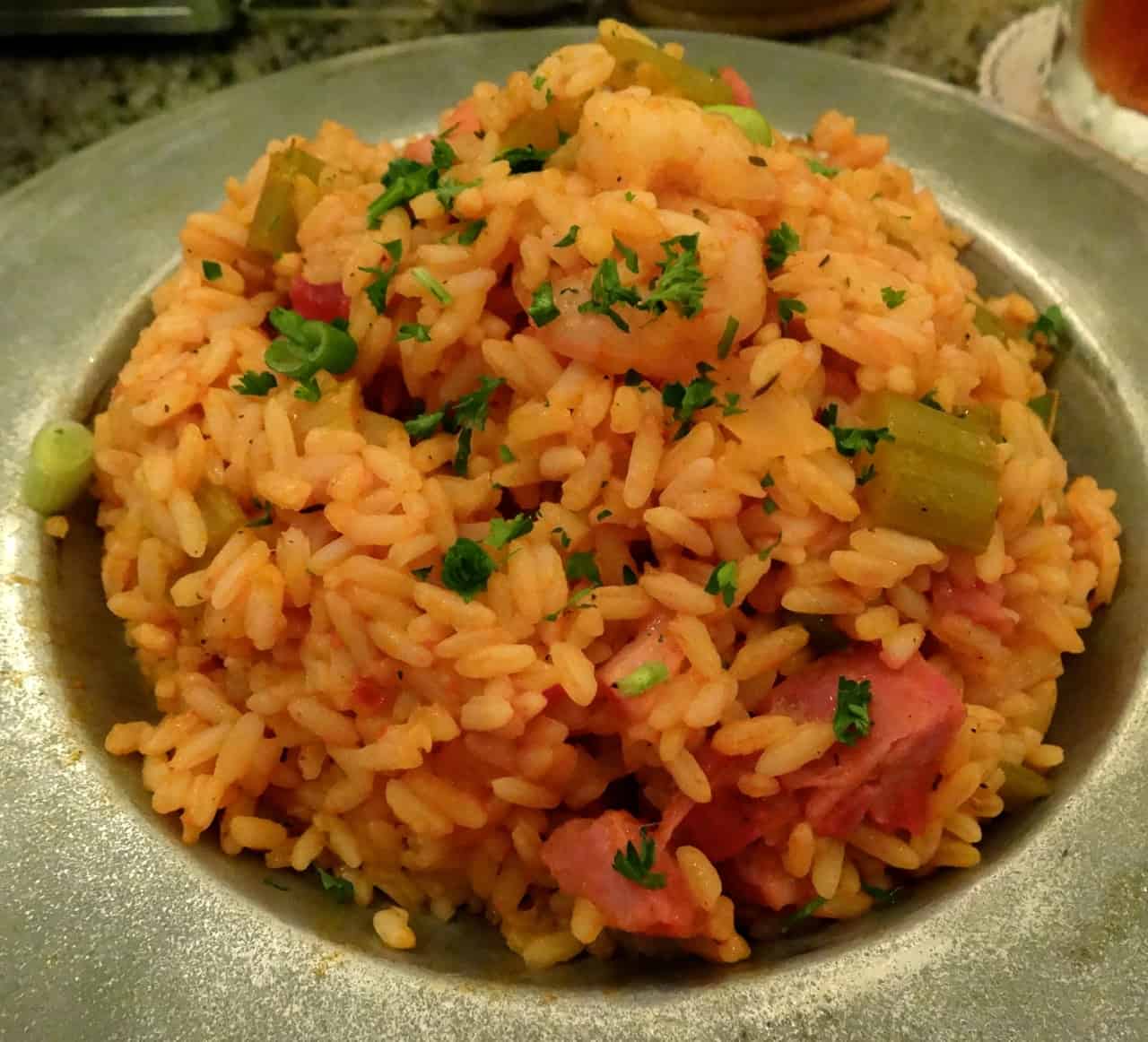 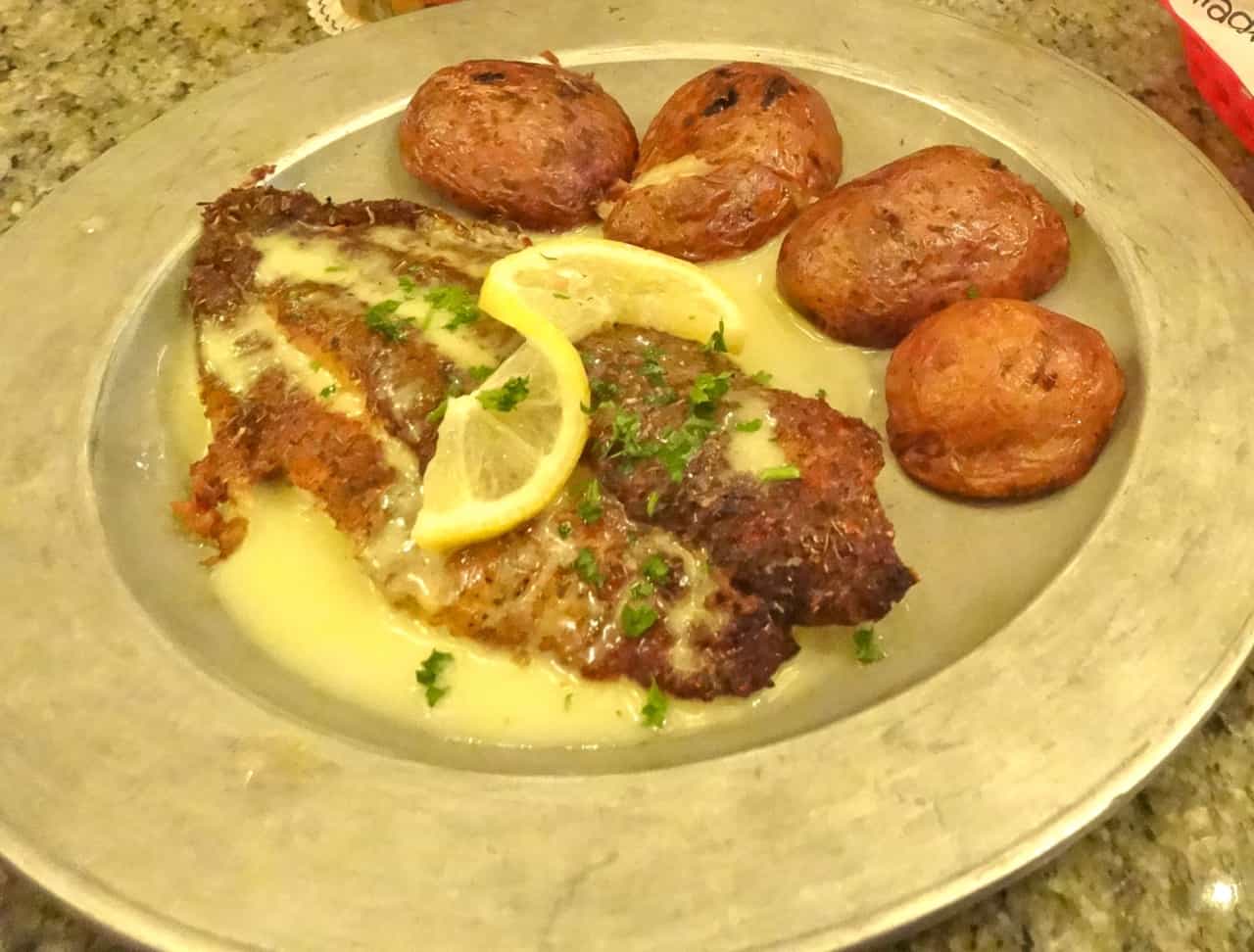 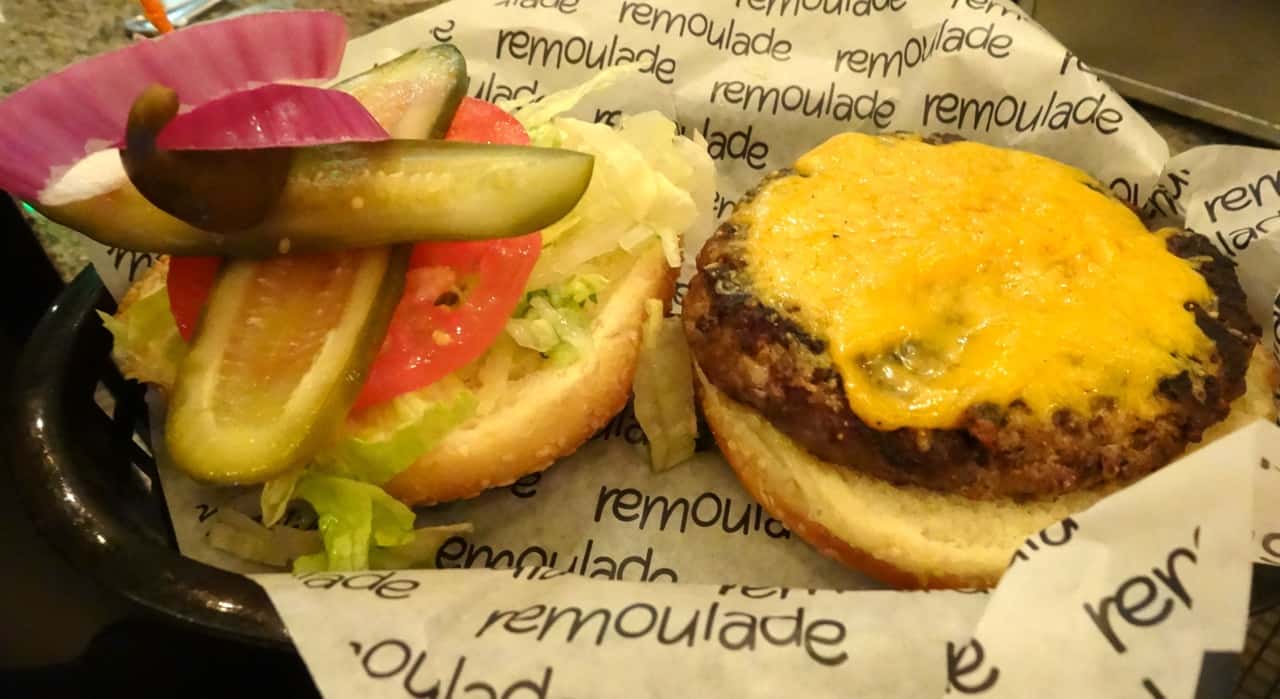 For pudding, I had, well pudding. Bread pudding from Arnaud’s next door – filled with rum-soaked raisins, custard and warm whiskey sauce (Bourbon, of course). Alex chose fresh strawberries marinated in spices, lemon, red wine and port, with French vanilla ice cream. Cat only had the vanilla ice cream (that’s how she rolls). The verdict on all our desserts: Heavenly! 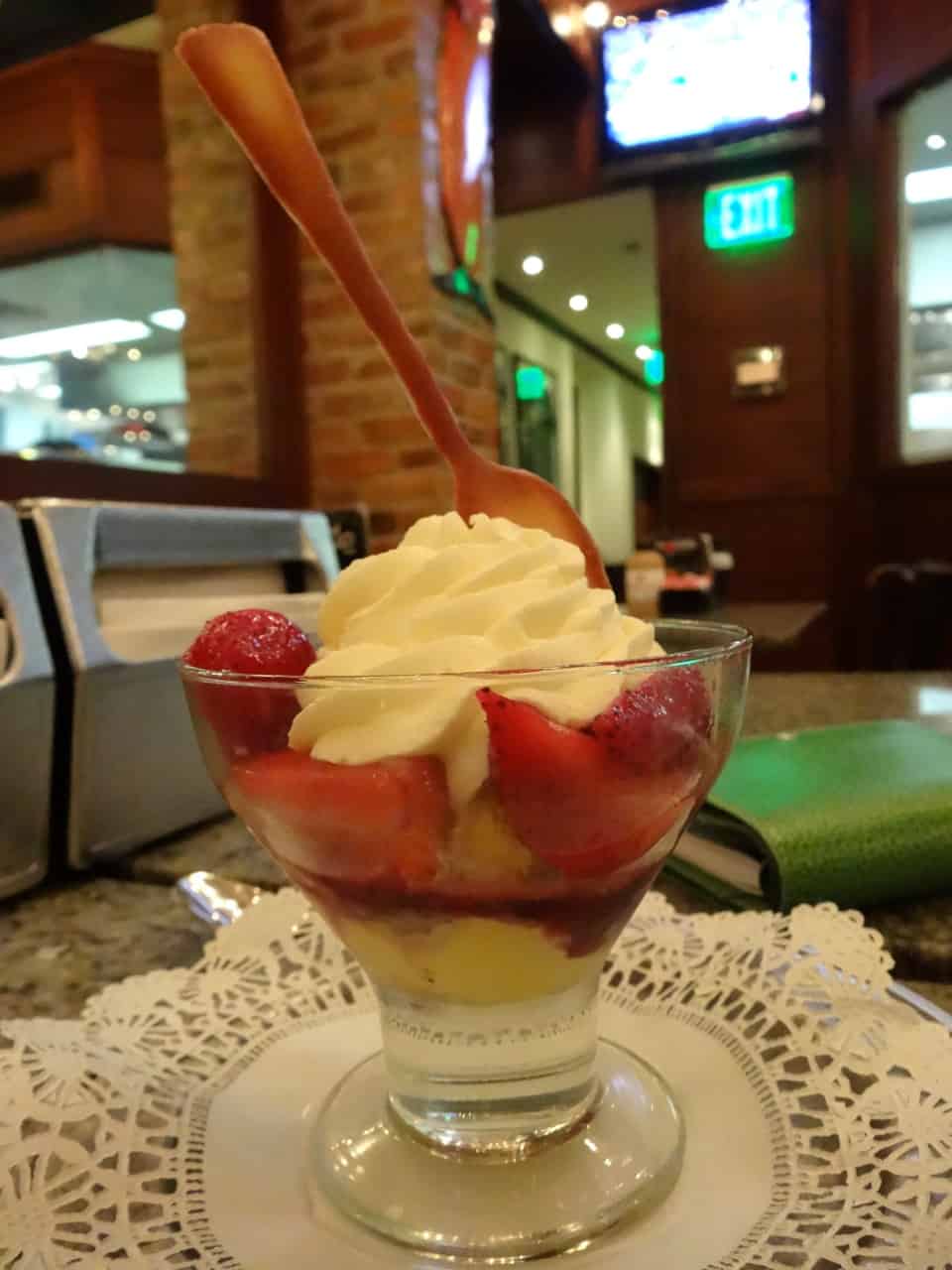 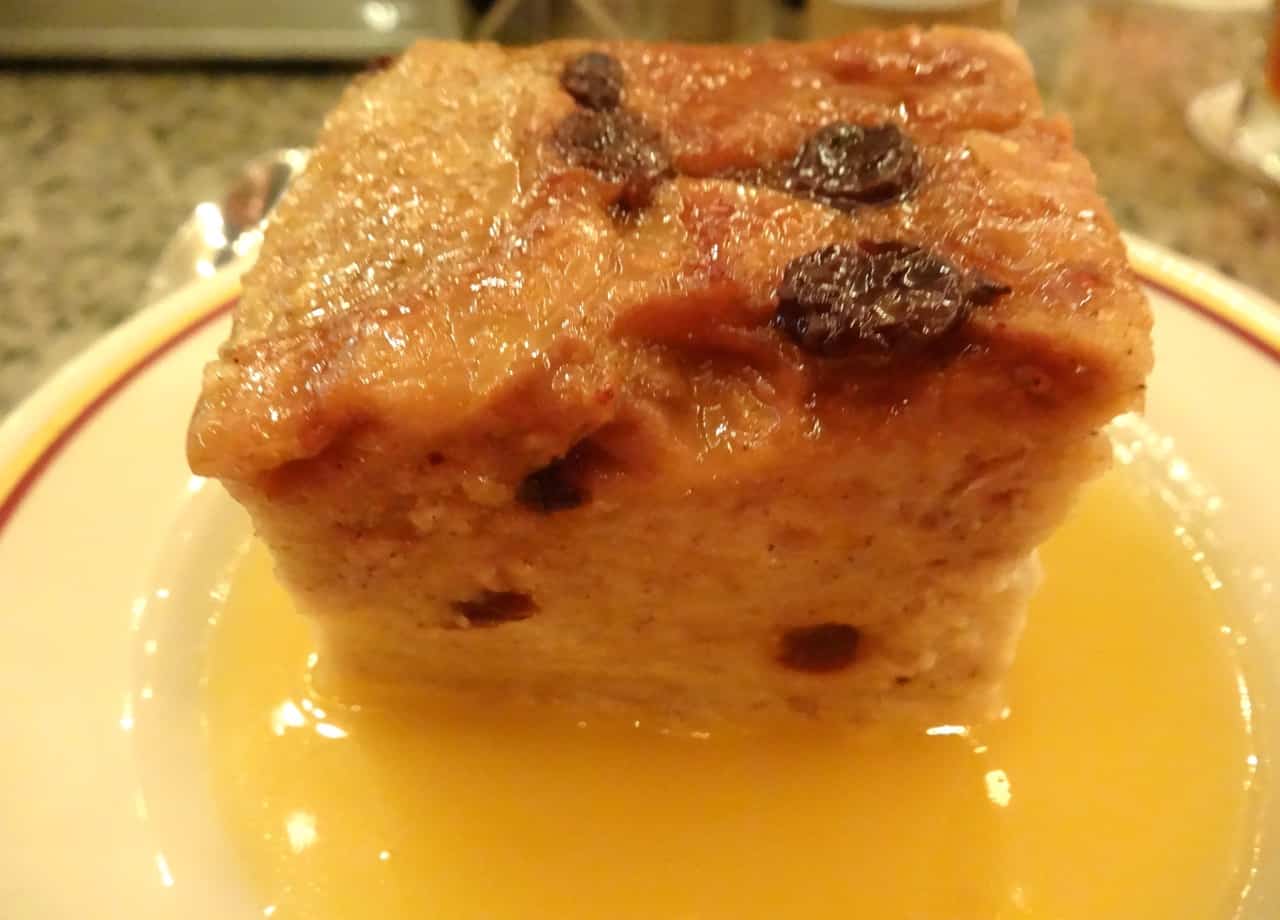 Do you like Cajun food? Do you have a favourite New Orleans restaurant?

Disclosure: In New Orleans, we were guests of New Orleans Conventions & Visitors Bureau. However, we’re free to write about anything we like, as always.