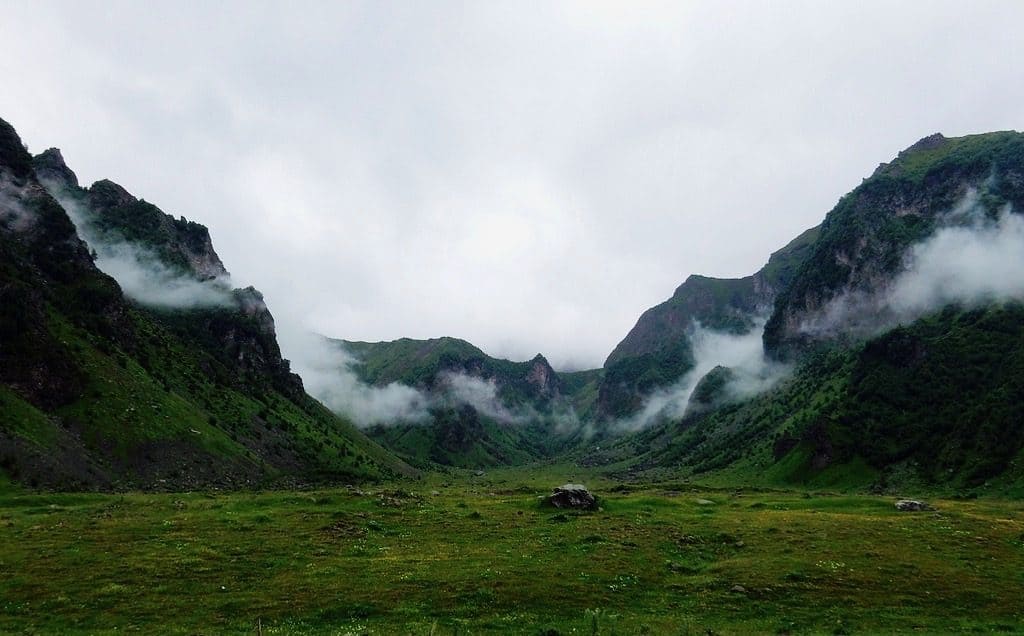 Along the Georgian Military Highway

If you’re following this blog – and reading this, chances are you’re interested in the world’s slightly more obscure places. You might for example have visited Georgia, or perhaps you’re considering it for your next Euro/Asian jaunt. (Is the Caucasus in Europe or in Asia? The answer isn’t clear cut). Any which way, if you’re spending hot summer days in charming Tbilisi (and why wouldn’t you…), perhaps you’d like to get out of town for a day – get some fresh air? You would? Then join us for a (very) short hike in Kazbegi National Park. We’ll also see a stunning castle and a church / monastery appearing out of the mist, straight out of a fairytale: now you see me, now you don’t. We’ll drive along the Georgian Military Highway, we’ll try some home-cooked country cuisine and learn how to make the national favourite Khinkali dumplings. Come, come… 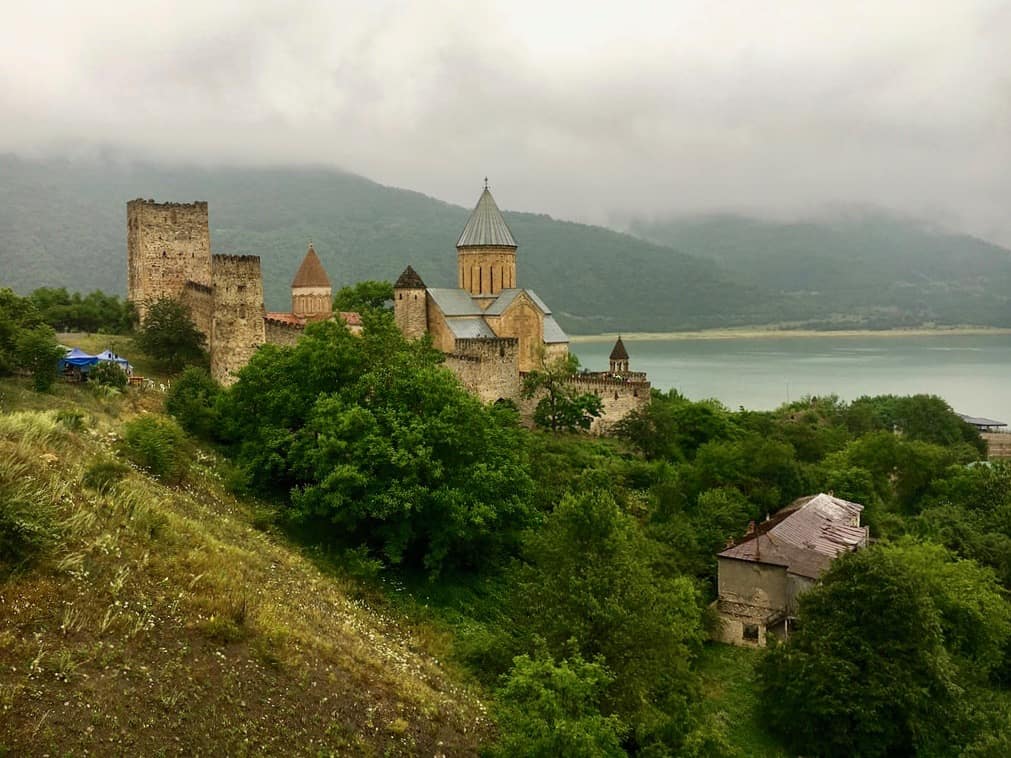 Just 70 km from Tbilisi is the 13th century Ananuri Castle, located on the oh so green Aragvi River, once seat of the mighty Dukes of Aragvi. Got to hand it to the medieval Georgians: they knew how to choose clever spots for their castles. A gorgeous location to be sure, but also a good place to spot the enemy. Not that it was always helpful. Ananuri has been the scene of numerous battles and drama; in 1739 the dukes were massacred by rival dukes, and the castle set on fire. For us it’s a first chance to stretch our legs, pose on a rock (to show off the river, of course), climb stairs along a narrow vertiginous ridge, and see it on the inside looking out. Walls and bars they surround me. But, I don’t want no sympathy. No baby, no baby, All I need is some tender lovin’. To keep me sane in this burning oven. 🎶  Oddly appropriate lyrics. But I digress. 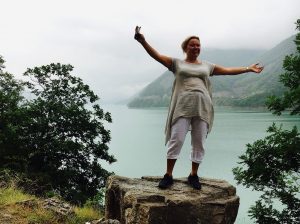 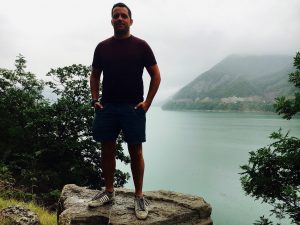 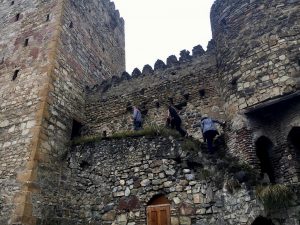 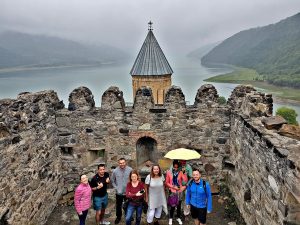 Climbing up the ever-such-a-little spine-tingling stairs to see the stunning Ananuri Castle from the inside – and the gang in the courtyard. Our guide, Beqa, climbed up on the ramparts to snap this photo, so although I look even sillier than normal here, I’m posting it, to reward his effort and risk-taking. Focus on my beautiful friends instead, why don’t you – and the equally beautiful surroundings. From left to right: Anél, Andrew, Adrian, a hanger-on, Ingunn, a lovely Swedish/Indian couple under a yellow umbrella, and Tom.

Continuing along the Georgian Military Highway, we reach the town of Stepantsminda, a mere 10 km from the Russian border, or specifically North-Ossetia, one of the autonomous, often troubled, Caucasian republics you hear about on the news. Can’t really explain why, but I find the thought of being just down the road a little thrilling. In Stepantsminda, we’re welcomed into a local home, where we learn how to make Khinkali, a traditional Georgian mountain dish. The dumplings are stuffed with meats, herbs and spices (veggie ones also available), then boiled in a salty broth. Here’s Ingunn giving it a very good go, under the watchful eye of Beqa:

Then lunch; just a selection. 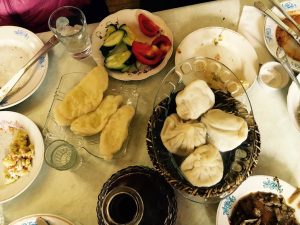 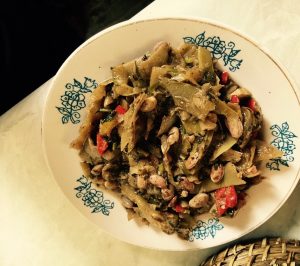 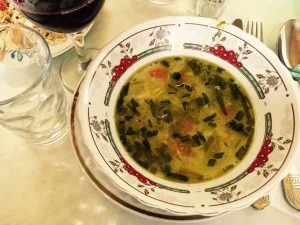 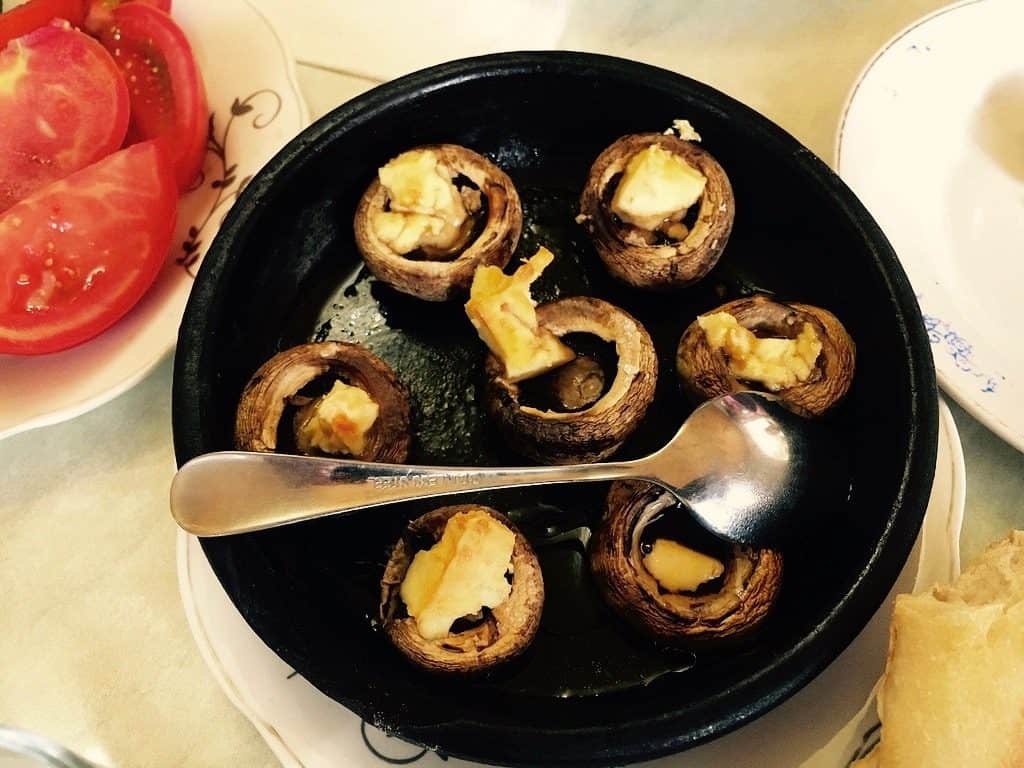 Next, the hike. Ingunn and Beqa climb the many long, steep hills to the top – from Stepantsminda at 1,740 metres height to 2,170 metres, that’s a respectable ascent. The rest of us give up after one (also verrry long and verrry steep) hill, then wait for a 4WD to take us the rest of the way. A variety of excuses, mostly valid ones: not feeling well, not the right shoes for mountainous terrain, bit dizzy – and perhaps one less valid: just feeling lazy (me)… Who do you think wait for us at the top? Their arrival will no doubt have been the more rewarding one. 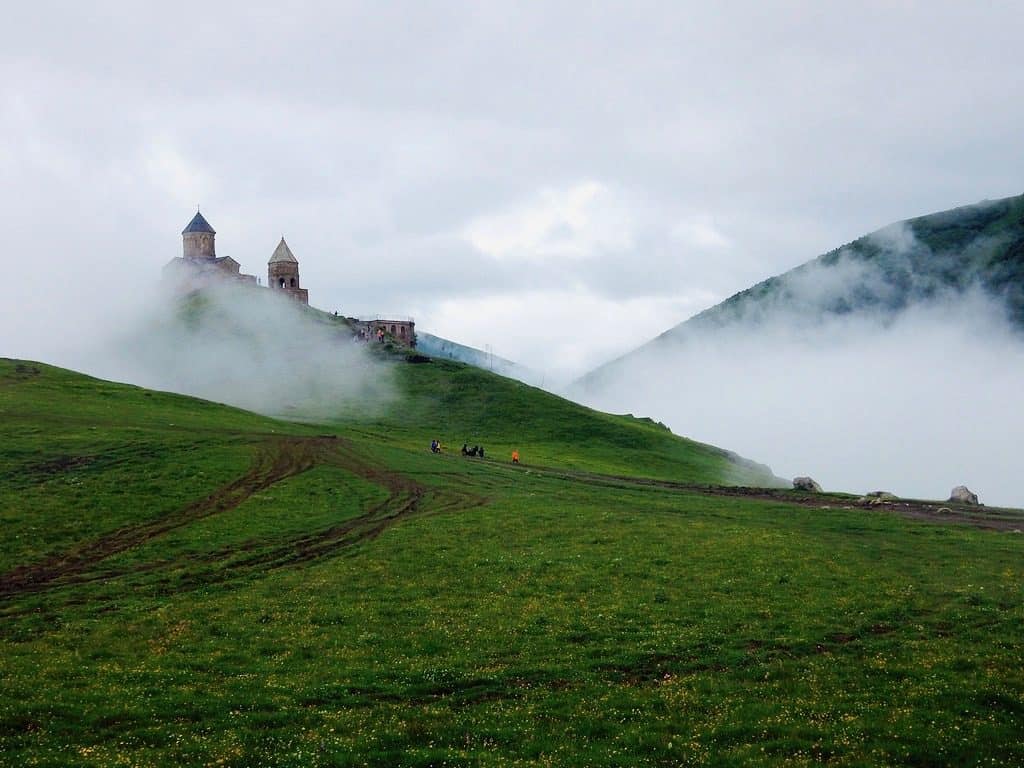 Also waiting for us is this remarkable view: the Gergeti Sameba – Gergeti Trinity Church – rising up through the mist. Just a church and a bell tower, really. Heart-stirring simplicity. Almost enough to make you religious. Or, at the very least, in awe of those intrepid souls who built it in the 14th century. 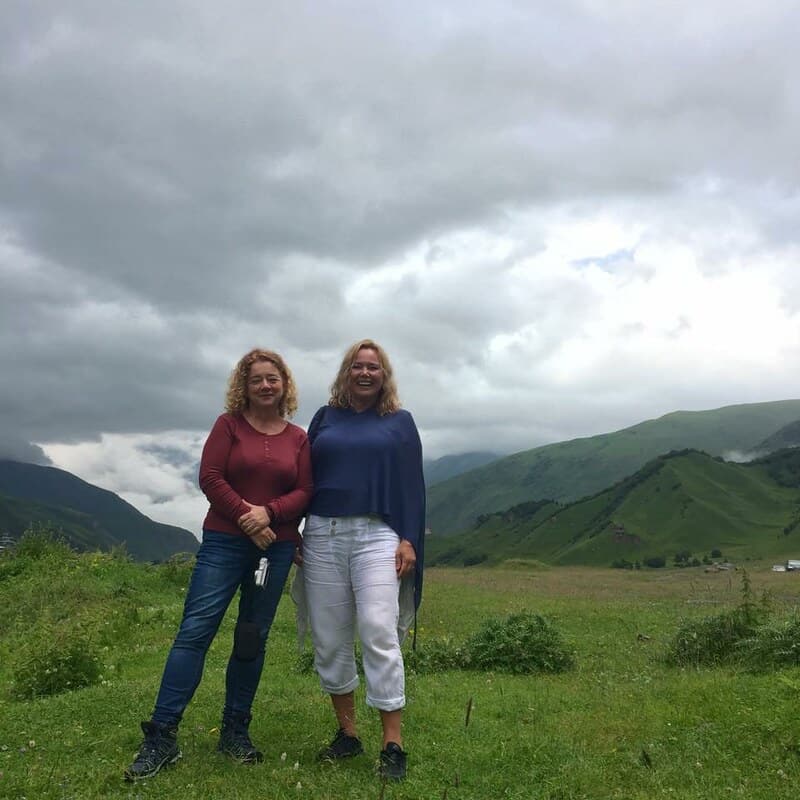 Tips – and a few words of caution

This is an area where it pays to keep a watchful eye on your footing, especially in foggy, low-cloud conditions, which seem to be the normal here. The paths can be treacherous. And be aware if you’ve a severe fear of heights. Going back down the hill in the 4WD will shake your inner organs about. Also, expect a bump or two on your head from hitting the ceiling. Other than that, it’s all good. If you’re a keen trekker, and don’t mind steep inclines, you can continue up the dormant volcano, Mount Kazbek. It’s normally a six-day climb, ending at just over 5,000 metres height.

Our day out in Kazbegi National Park was with Envoy:tours. Some versions of this tour also takes in Jvari Church and Mtskheta; a little weather-dependent, I think. Waiting for the usual disclosure? Nope, nothing sponsored here. All paid for by my own ever dwindling bank account. As this is the third of Envoy’s tours I’m recommending, I thought I should point that out.