As this post goes to publish, I’m off on an interesting adventure, about to visit a French ghost town in the mountains of Cambodia. And I’ve been warned wifi is sketchy, at best. We’ll see.

Meanwhile, I thought I’d start a new series here on Sophie’s World, as sporadic as all the rest, but there you are. I’ve decided to take on a new challenge, you see. It’s all about saying yes. Saying yes to… if not everything, at least much more than I normally do. Unless it sounds too excruciatingly boring. So here goes: the first installment in the new series Sophie tries new things. Subtitle: Thai massage. 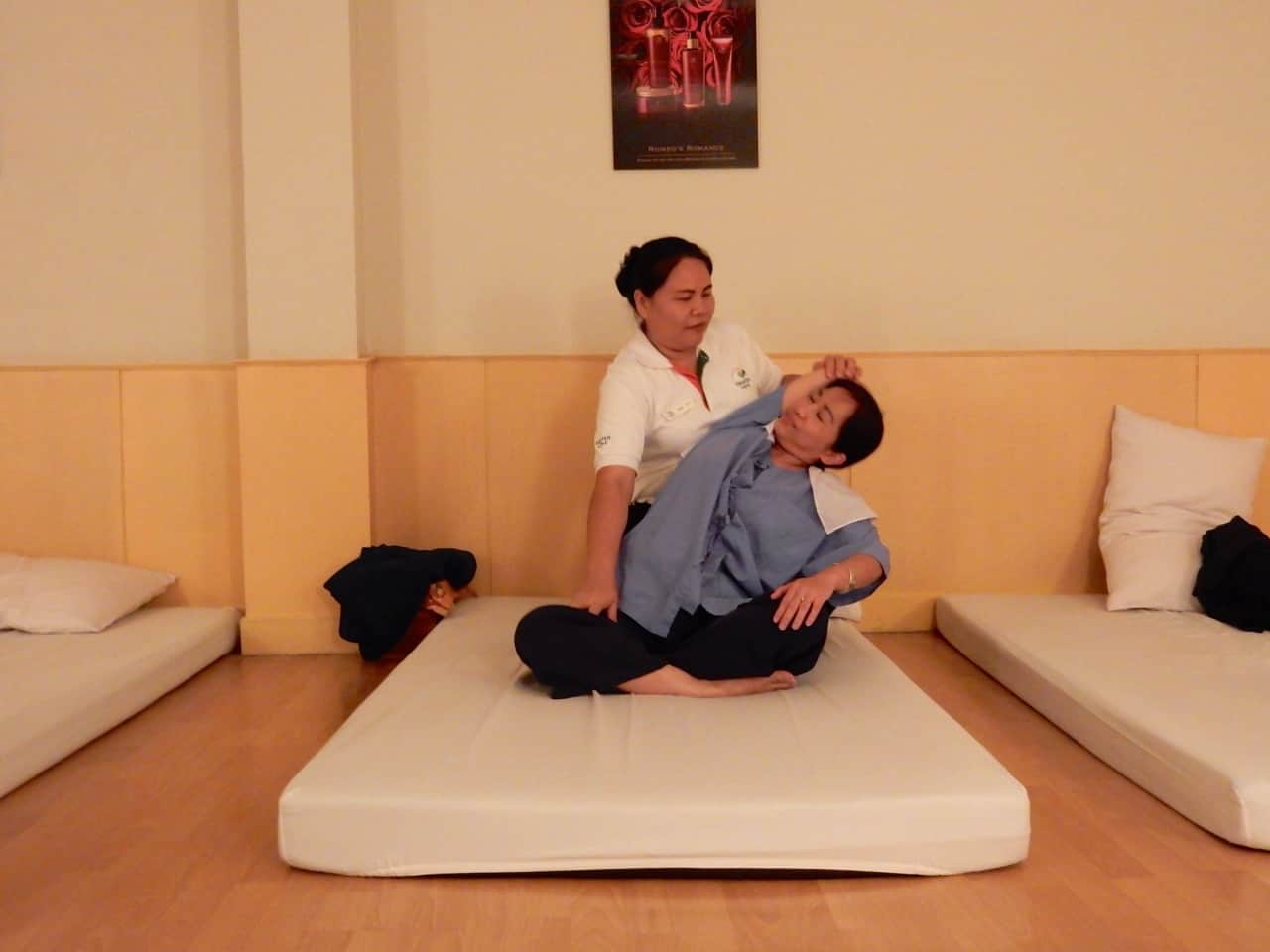 Healthland is a spa and massage centre with nine branches around Bangkok. Chavy, a young Thai, tells me that when he wants to spoil himself, he does one of two things: mum or massage. Mum means home cooking. Younger generation city-dwelling Thais no longer know how to cook, he says. In fact, it’s quite common for city apartments to not even have a kitchen. Meals are street food: breakfast, lunch, dinner, snacks. Naturally, going home to mum is a special treat.

The other way he spoils himself is by indulging in a massage.

There are plenty of Thai massage studios in my hometown. I’ve been curious, but also a little apprehensive, to be honest. Some of these studios (in Norway at least) have been known to double as a different kind of business, one that I’d feel a bit awkward stumbling into unknowingly.

As we pull up in front of the Sathorn branch of Healthland, I’m reminded that I have a choice of a full body massage or a foot massage. Curiosity gets the better of me, so full body it is. Along with five other equally brave Nordic bloggers, I’m directed through dimly illuminated corridors and up candle-lit stairs, into a room where six mattresses are lined up on an elevated platform. We’re told to dress down to our knickers and put on the wrap-around tops and loose trousers we’re given. 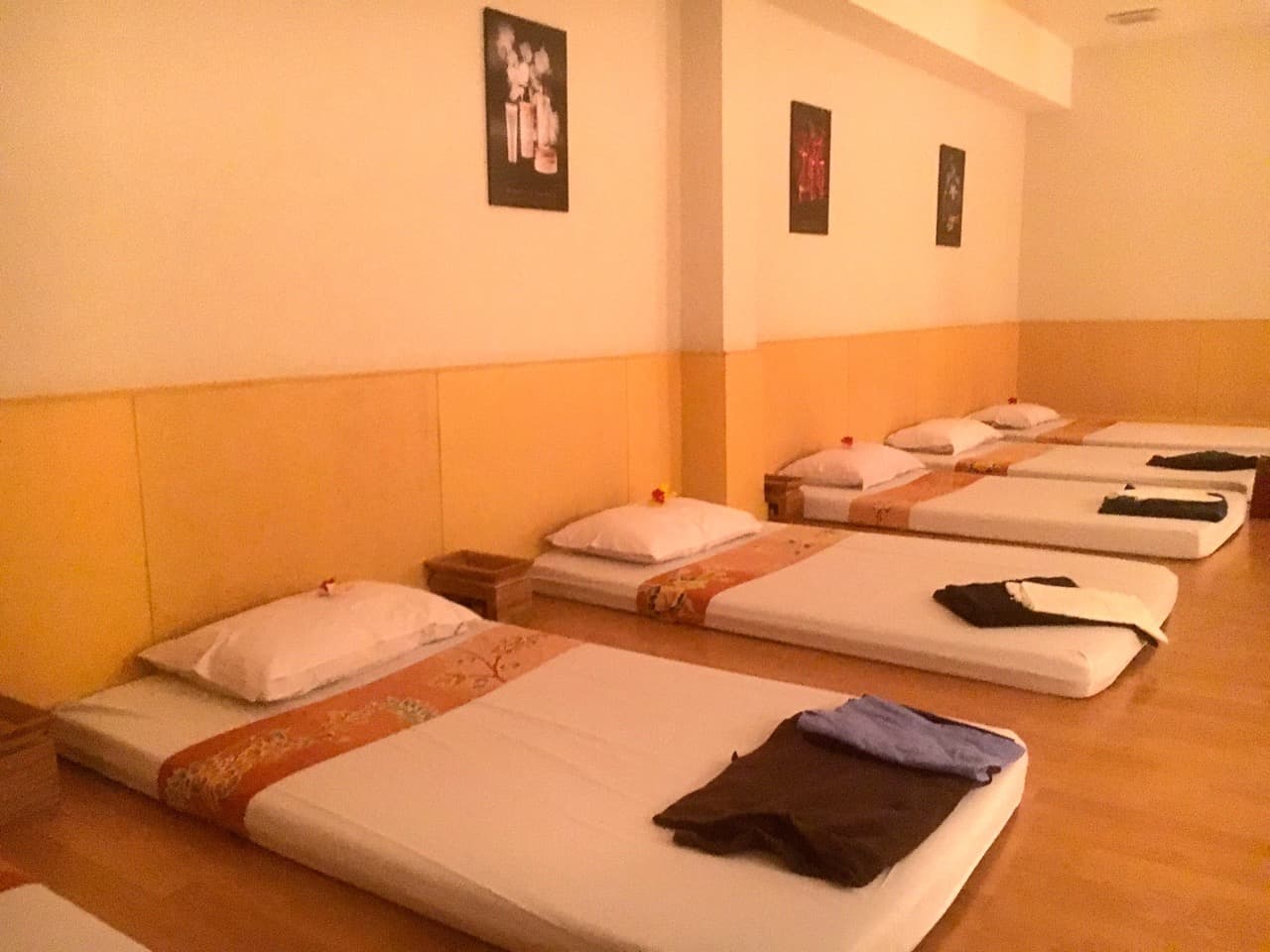 What follows is 1 hour and 15 minutes of alternate pleasure and pain. Though I must say, pleasure is the prevailing sensation – a stretchy sort of pleasure. My masseuse is small but by no means scrawny. She’s athletic, muscular, strong – and reminds me most of all of the physical therapists at my local gym. Very reassuring.

Fingertips, hands, elbows (ow!), feet, thighs; it feels as if she is using her entire body as a tool. She squeezes, kneads, pokes, punches, rubs. I’m bent and twisted and stretched in every conceivable direction – and some which were until now quite inconceivable. I’m very glad I have flexible hips. A bit worse in the arms and shoulders, I soon learn. She obviously notices, too, and gives that area an enthusiastic workout.

After an hour or so, I’m left to rest for a bit while she goes off into an adjoining room with the other masseuses. They chat and giggle, and we’re all a bit paranoid. Are they talking about us? Nah, probably not. We’re not that interesting. Or unusual. Or weird. Or are we?

Then she’s back, now wearing a face mask. Ominous? No, as it turns out. She sits back against the wall, puts a pillow on her lap and directs me to lie down on my back. She then leans over my face (not uncomfortably close), reaches underneath my upper back and goes to work on my shoulders and neck and head from that direction. It’s surprisingly pleasant.

Before I know it, the session is up. And here I was, about to fall asleep!
I’m curious how I’ll feel tomorrow. Beat up – or deliciously supple? I’ll let you know.

Have you ever had Thai massage? Would you like to?

Disclosure: I’m in Bangkok as a guest of TAT, the Tourism Authority of Thailand. Every bit of pleasure and pain, every thought and opinion, are mine, all mine. As ever.