The Boy from Sarandë 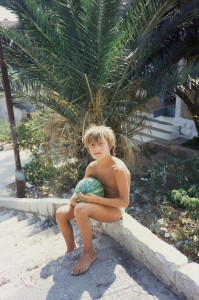 I had just spent a hot August-day exploring the ancient ruins of Butrint, one of two World Heritage sites in Albania. Waiting for the ferry to Corfu, I ambled about the streets of the port city Sarandë. Soon, I was accosted by a large, unruly group of local teenagers, asking for money. They were so many, I started to feel uncomfortable. So when the group spotted a more promising prospect, I took the opportunity to sneak away around a corner.

That’s when I met this boy. Sadly, my Albanian was limited to a minimum repertoire of c’kemi, faleminderit, and nuk kuptoj (hello, thank you and I don’t understand, respectively), so we had no common language. Instead, we communicated through drawings in the flower bed and facial expressions. For a long time, we sat on this ledge.

After taking this photo, I offered him a few lekë and a packet of Juicy Fruit. He happily accepted the gum, but to my surprise he declined the money. When I had to return to the main thoroughfare to catch the ferry, he walked ahead and peeked around the corner before smilingly giving me the all-clear.

This was in 1992. He must be a young man now, about 30. Occasionally, I wonder how his life in the new Europe is. You just don’t hear that much from Albania.