The streets of Oslo are filled with love

Terrorism. In Oslo, one of the safest cities in the world, one of the most peaceful. A month ago, the worst tragedy since World War II hit Norway. A mad man, a terrorist, set off a bomb near the Prime Minister’s office, killing 8. He then travelled to the island of Utøya and murdered 69 more. This afternoon, the victims were honoured in a national memorial ceremony. Each name was read out loud, their faces on a big screen before us. 77 names, mostly kids. Here are my notes from those summer days of terror. 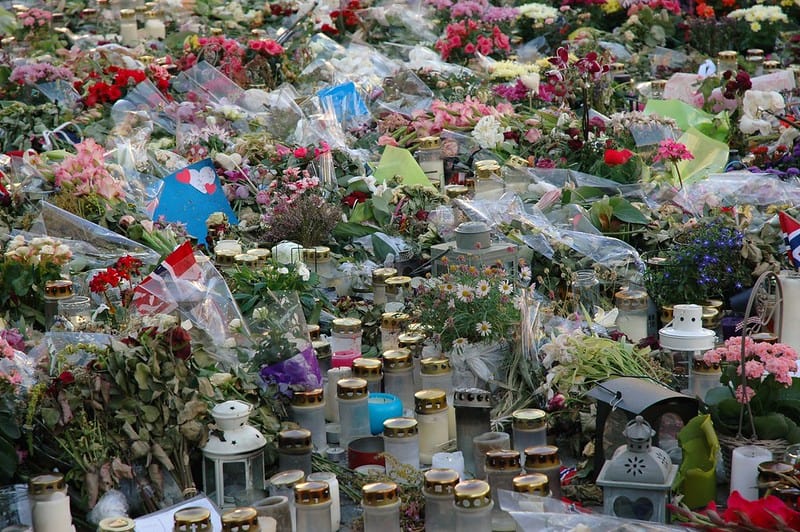 We’re only 5 at work today. Normally, we’re 30. It’s the middle of the holidays. I like working in July and I adore Oslo in summer. It’s vibrant, gregarious and enticingly uninhibited. Long, white nights. Feels like the day never ends. I get so much done.

A loud bang. Like a sharp burst of thunder very near. The building shivers a bit. Nina next door pops in. “Did you feel that? Odd, what?”

Through the window, we spot yellowish smoke rising from the government quarter, four blocks away. Nina thinks it’s a bomb. I don’t. Too far-fetched. But what? Rock blasting? I left civil service four years ago. Hope all my former colleagues are unharmed. Most are on holiday, I expect.

We return to our work, occasionally checking online newspapers. “Explosion in the government quarter. More to follow.”

Nina’s twin sister stops by. Tina. She has just walked past shattered windows and people covered in blood. It smells of gunpowder out there, sulphur, like fireworks. ‘The police told everyone to get away from the area,’ Tina says. ‘There might be another bomb.’

Bomb? Surely not. This is Oslo, the most peaceful place in the world.

Then a rumour: A second bomb at Stortingsgaten (Parliament Street) 14. We’re at 22. Time to leave. Outside, we take off in different directions to go home. I get on the bus. Armed police are everywhere. Very unsettling. Norwegian police don’t carry guns.

I’m at my mum’s house, TV on. It was a bomb! Most likely in a car parked outside the prime minister’s office. People are asked to leave the city centre. We’re stunned.

I wonder about the intention. Striking in the middle of the summer holidays, half an hour after working hours? Did they mean to harm the government, yet hurt as few people as possible?

Little do we know the nightmare has just begun. 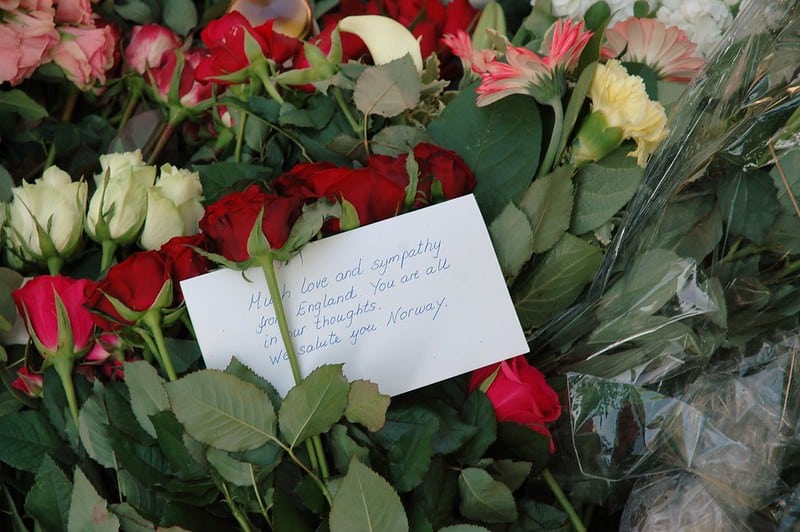 Jens Stoltenberg, the PM, is on. His immediate reaction: No one can frighten us away from democracy and openness. Our response will be even more democracy. Even more openness.

Democracy and openness are core values here. Ours is also a very egalitarian society. There are no real class differences; everyone is involved. You frequently meet high-ranking politicians on the street, in a café or on the bus, happy to chat. We call them by their first names. The royals are equally unpretentious. Last September, I bumped into them twice. Once at a Sting concert, once at a John Cleese comedy show. I sat right behind the king. The whole family was there. All laughing a lot.

Still no word on who might be responsible. Though there is talk of Al Qaeda.

Then: breaking news of gunfire at Utøya.

Utøya Island is venue of the annual AUF summer camp. AUF is the youth branch of the Labour Party. About 600 kids, aged 14 – 25, spend a week at Utøya every July, discussing politics, singing around the campfire, playing, swimming, having fun, enjoying summer.

Norway has a long tradition of youth involvement in politics. All parties, from the far left to the far right, have active youth organisations. Most have been involved in political work at one time or another. Either in non-partisan organisations like Amnesty, Yes to the EU, No to the EU, or similar – or in the party organisations. As a people, we tend to always challenge authorities. From an early age, we’re encouraged to question. Not to obey.

A man dressed in police uniform has been shooting at Utøya. Some kids have jumped in the lake, we hear. The mainland is about 500 metres away – a short ferry distance, yet a long swim in the cold water. 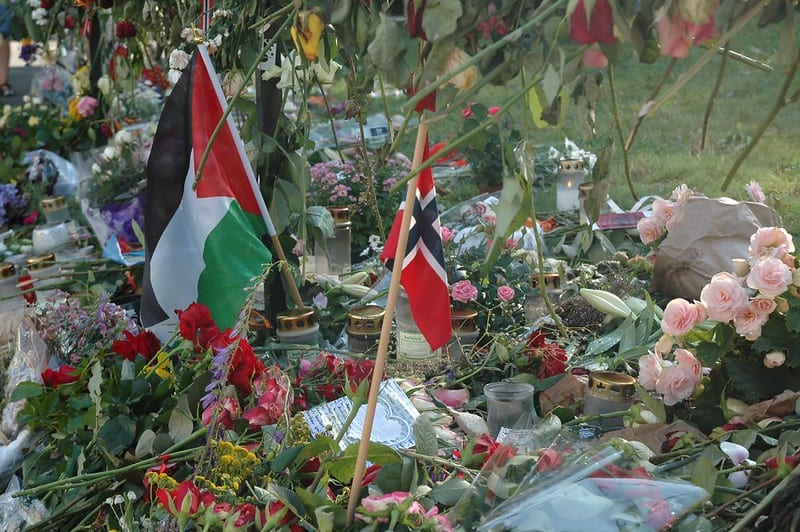 As many as 10 kids may have died at Utøya. The police have apprehended someone. A local, it appears. Everything feels surreal. Difficult to take in. Difficult to sleep.

The number of casualties has risen to 84. I’m dizzy, nauseous. There are no words…

The PM speaks at a memorial service in Oslo Cathedral. It’s beautiful! He has been to Utøya every year since 1974. He was 15 then. His childhood paradise. This weekend, paradise has become hell. Jens talks of Monica and Tore. Monica was 45: “Mother Utøya” for 20 years. Near and dear to thousands of kids through the years, making them feel safe and at home. Tore was 21, a gifted young politician. He recently gave a passionate speech on the question of implementing EU’s postal directive and won over the entire Labour Party.

Later, we learn Monica was shot in front of her husband, her teenage daughter and her daughter’s friend. The killer then turned his gun on them. Monica’s husband and daughter managed to escape. The friend didn’t.

The terrorist is Anders Behring Breivik, a 32-year-old man from Oslo.

The numbers are adjusted. 68 kids are confirmed dead at Utøya. Six are still missing. Eight have died in the Oslo bomb explosion. Some were civil servants. Two just happened to walk past.

Ours is a small, close-knit country. Only 5 million people. Distances are vast, but the kids represented all regions. Everyone knows someone who has been affected. My friend’s beautiful daughter became the youngest victim. She turned 14 just days earlier.

After setting off the bomb in Oslo, Breivik drives an hour, then takes the ferry from the mainland to Utøya. Most of the kids are in the main hall, trying to find out more about the bomb explosion in Oslo – glad they’re safe on the island, miles away. Some linger outside. A tall, blond, athletic police officer motions for them to come over. The police can be trusted, of course. As they approach, he pulls out a gun, shooting one after the other. 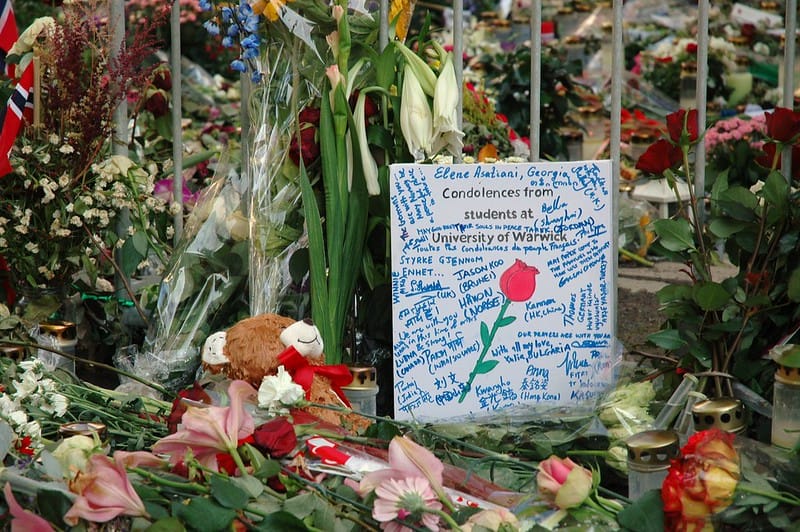 We hear fragments of what happened. Children tell the most gruesome stories on camera. Stories of watching friends being mowed down – in the main hall, along the beach, in the water… Stories of running from the hunter, of hearts nearly jumping out of their throat when hearing him approach their hiding place. Of dead friends falling on top of them. Of jumping out of windows, of breaking bones, but still running. Of swimming, of being shot in the water…

Some run to their tents to hide. Breivik spots them and follows. In the tent, there’s nowhere to hide.

I can’t begin to imagine the fear these kids must have felt. Yet they are all calm, composed. Some are interviewed on the BBC, speaking in English, calmly telling their stories in a foreign language in what must surely be the most stressful time in their young lives. Stories of utter horror. But also stories of great heroism. I’m so impressed and so proud of them. 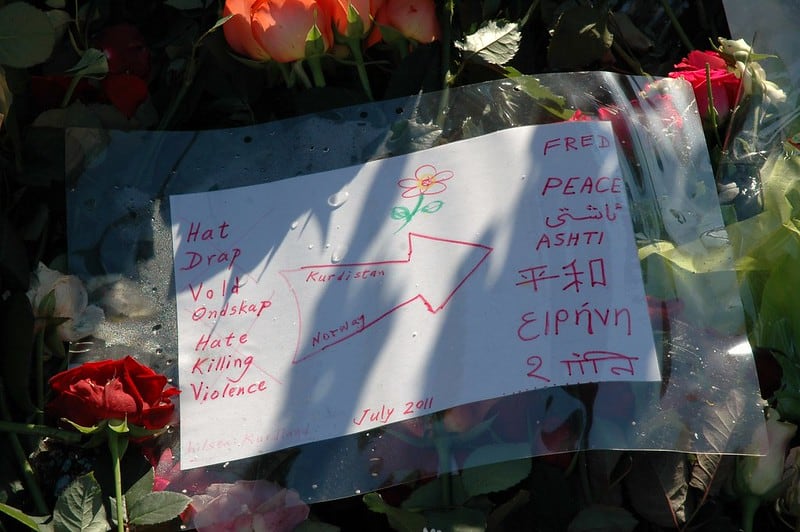 Breivik planned his actions for nine years. He spent the last two years writing a 1500-page manifesto, published the same day. It’s partly a composite of other like-minded thinkers, partly a diary: his own life story, his thoughts, his preparations, his plans, his work. All in painstaking detail.

His main gripe with society is multi-culturalism and the rising influence of Islam in Europe. The main culprit, in his warped mind, seems to be the ruling Labour Party for allowing this to happen; for being traitors to European culture. He says killing the kids was a gruesome, but necessary act to stop recruitment to Labour. This, he claims, is the beginning of a revolution.

Breivik meant to hit the Labour Party. By hitting a political youth camp, one of the finest features of a democracy, he hit the whole nation. I’m happy to say Breivik has failed in his mission. All political youth organisations already report record new members. 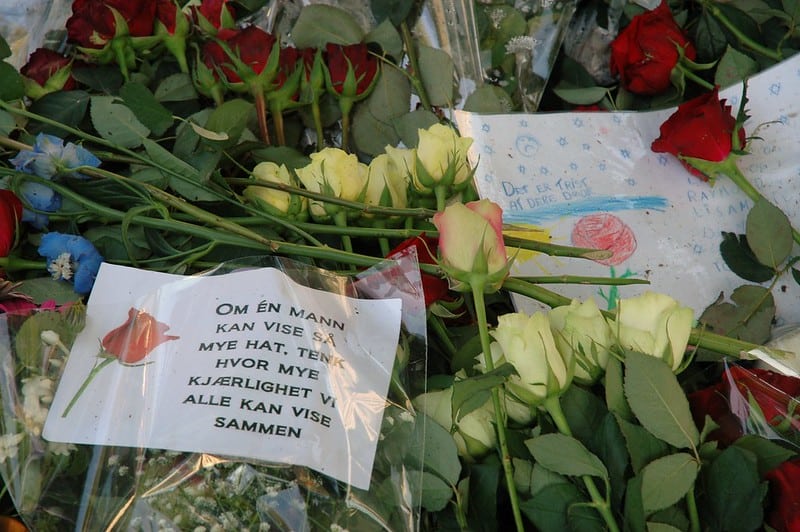 “If one man can show so much hatred, just think how much love we can show together”

Even more democracy, even more openness has been a mantra ever since 22 July. More importantly, it has been implemented. Three days later, the city centre was re-opened, cordons removed except around the buildings that were directly hit. Jens and leading politicians across party lines, as well as the royal family were all out and about with no extra security, hugging and comforting people and being comforted in return. Mette-Marit, the Crown Princess, lost her step-brother. He worked as a guard at Utøya. Though teary-eyed, she’s out there, strong and resilient, like the rest.

Things have changed. Immigrants tell stories of being hugged by locals, complete strangers. A facebook group has been set up to support Breivik’s mother. She’s a victim, too.

Last night (Monday 25 July) there was to be a flower parade through the streets of Oslo. It was cancelled. There were simply too many people out. A parade wasn’t physically possible. More than 200 000 people were in the centre of our little capital. We all stood packed like sardines, everyone carrying flowers. 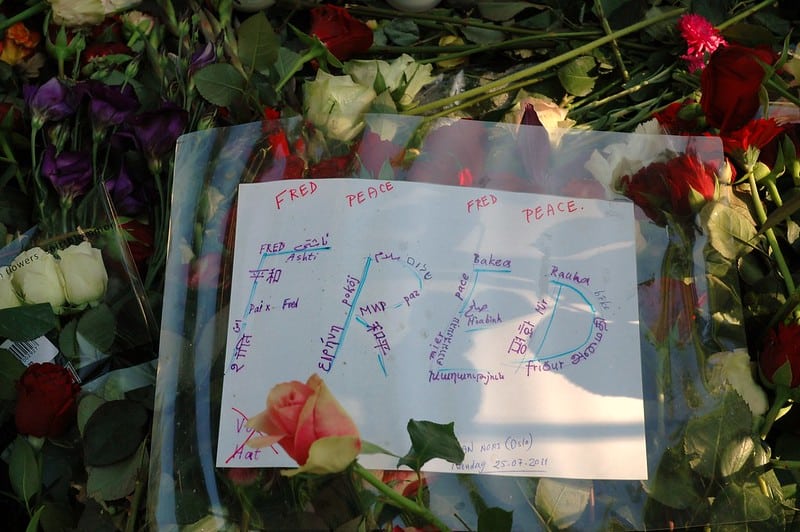 On an open stage in front of City Hall, Jens was welcomed like a rock star. As was Haakon, the Crown Prince. His words will go down in history: Tonight, the streets are filled with love.

It’s up to each and every one now – to stand up for democracy and get even more involved. Record voter participation is expected at the upcoming local elections in September.

Before I left for work today, I looked in on my daughters, still sleeping. The thought of never seeing them again is unbearable. This weekend, the parents of 68 kids gradually realised their children had been brutally killed. They will never see their children again.

The whole country grieves with them. This morning, Oslo is an ocean of roses. On the wind screen of police cars, on statues, by Parliament and the government quarter. There are so many flowers, a street had to be closed to traffic. 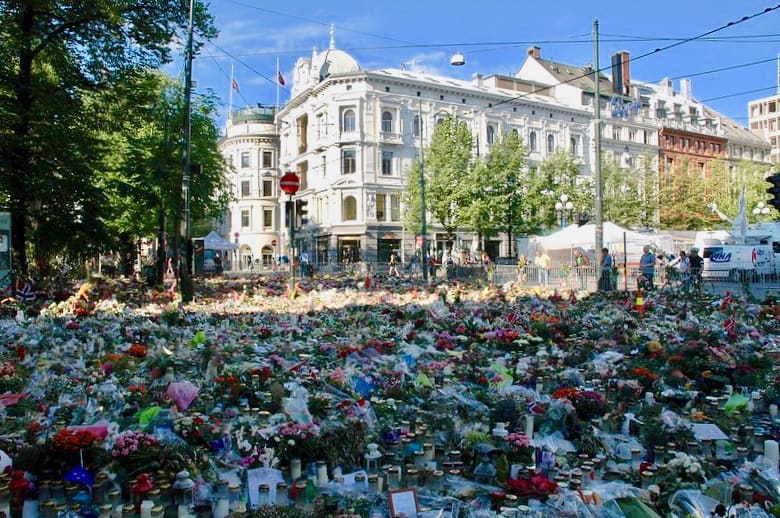