in Worms, Heidelberg, Speyer and Augsburg

I’ve been following in Luther’s footsteps once again. He really did get around, that Martin.

A couple of years ago, I had a look at what is probably the most famous of Luther spots: Wittenberg, where he nailed his 95 theses on the church door on 31 October 1517, thus shaking the Holy Roman Empire to its core. Christianity split in two forever more. 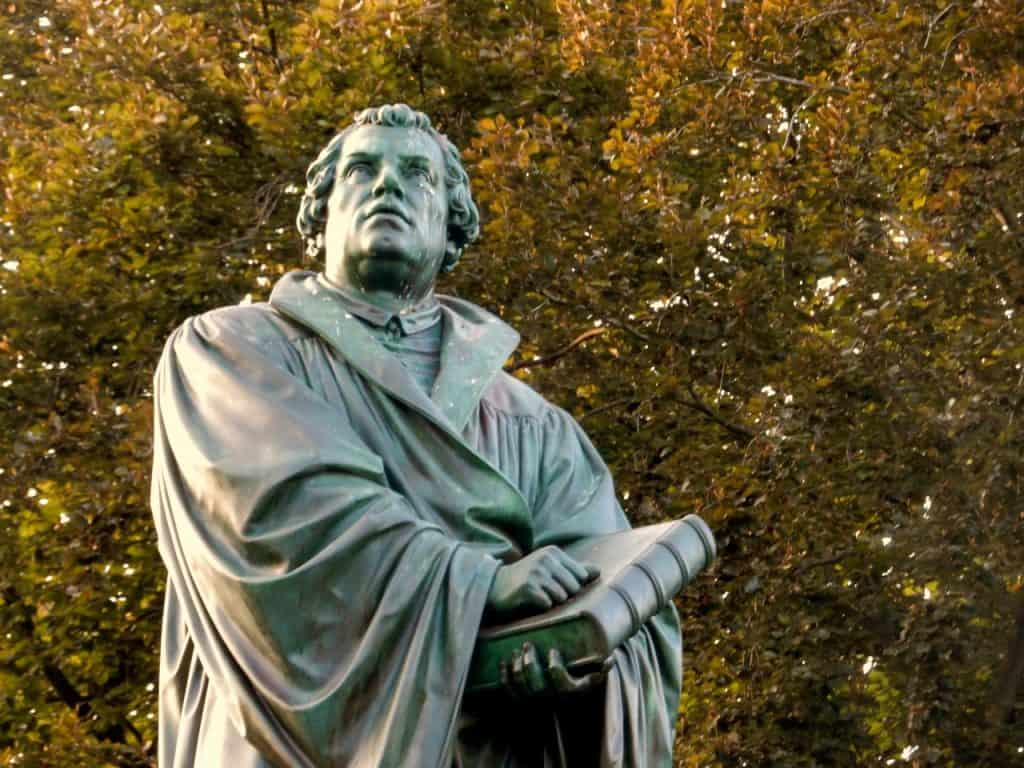 To celebrate the 500th anniversary of that bold, defiant act, the German tourist office have set up 6 different Luther routes.

In 2016, I followed a good part of Route 4 – Politics and rebellion through the cities of Dresden, Leipzig and Torgau. This year, I traced much of Route 5 – Sermons and Imperial Diets: Luther’s Travels through Worms, Heidelberg, Speyer and Augsburg. Practically stalking the man, I’ve been.

Religious history not your thing? Not really mine either. But as always, religion is as much about politics as it is about the hereafter. If it hadn’t been for Luther, our lives (in the Western world at least), might have been very different. His main objection was the Catholic church’s habit of buying and selling pardons. Nothing irked Martin more than the idea that you could pay your way out of sin. That way, only the rich could afford to go to heaven. To a certain extent, Luther was an early advocate of “the many, not the few”.

I’ve written more on the man and his theses in this post, and won’t repeat it here. Instead, we’ll have a look at the cities on this route: Worms, Heidelberg, Speyer and Augsburg. We’ll find Luther, and also have a look at what else is on offer:

Without further ado, here are 11 things to do on the Luther trail in these four German cities: 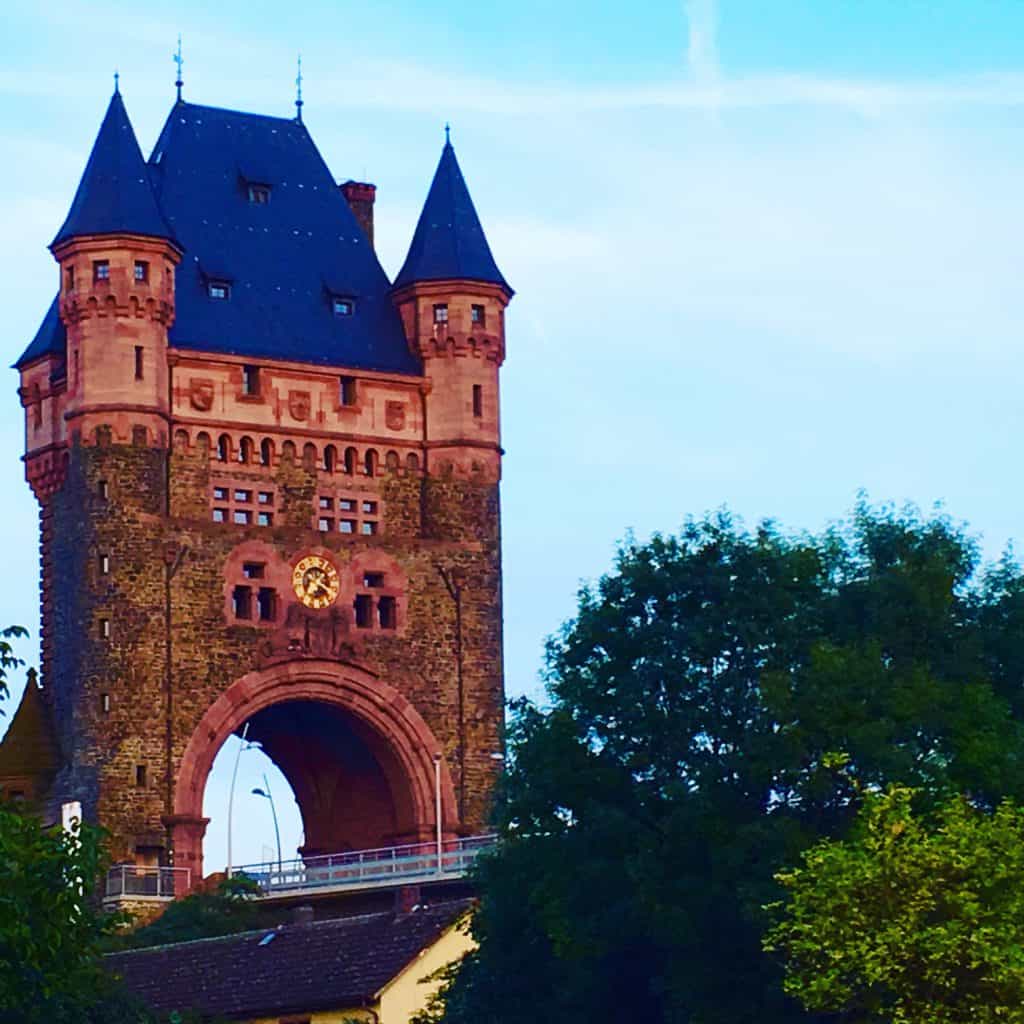 Luther arrived in Worms in April 1521 and appeared before the Diet (and no, this diet has nothing to do with what you eat. In politics, a diet is a formal assembly). The Diet of Worms asked Luther to recant the theses, but Luther could not, would not. In fact, he said:

If I now recant these, then, I would be doing nothing but strengthening tyranny

Brave man! But of course the Catholic Church couldn’t let that go unpunished. The diet declared Luther a heretic and issued the following decree:

…we forbid anyone from this time forward to dare, either by words or by deeds, to receive, defend, sustain, or favour the said Martin Luther. On the contrary, we want him to be apprehended and punished as a notorious heretic, as he deserves, to be brought personally before us, or to be securely guarded until those who have captured him inform us, whereupon we will order the appropriate manner of proceeding against the said Luther. Those who will help in his capture will be rewarded generously for their good work.

While it was being decided what to do with this heretic, Luther managed to flee to Wittenberg and disappear off the map for a bit. Probably a smart move.

In Worms, you’ll find him at the Luther Memorial, an enormous group of statues – 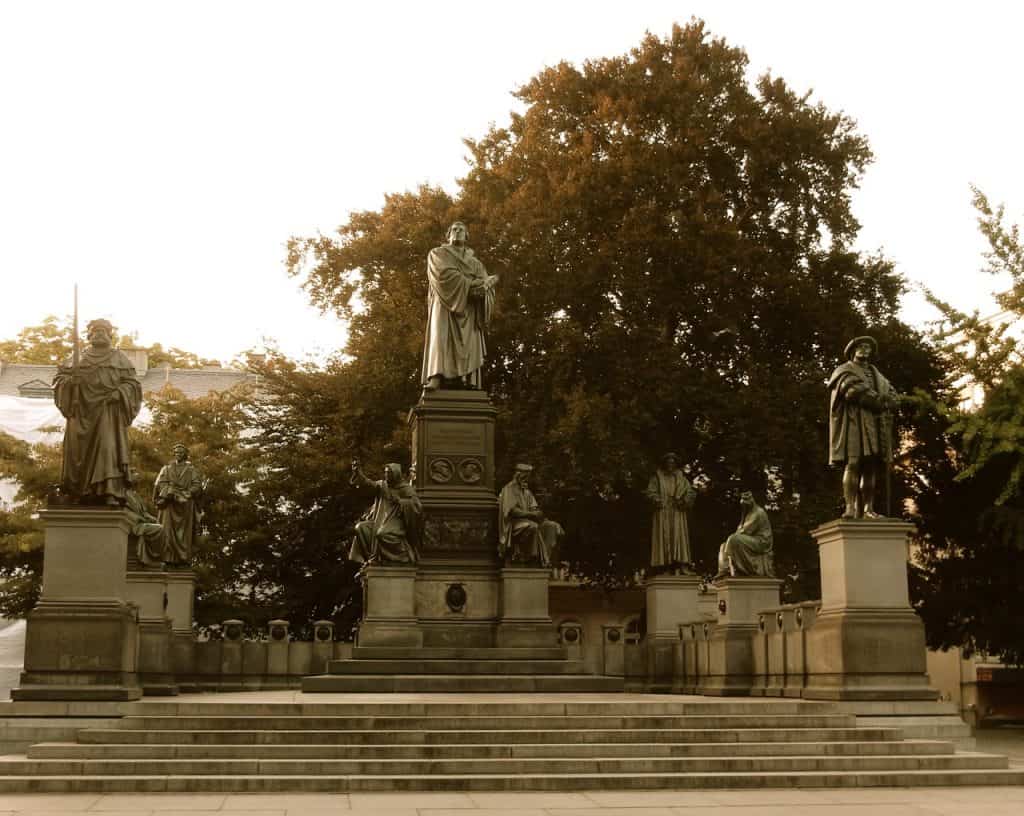 Here I stand, I can do no other.

– and along the pavement, where you’ll see Luther’s sayings – particularly the famous words he (supposedly) uttered after his sentence here in Worms 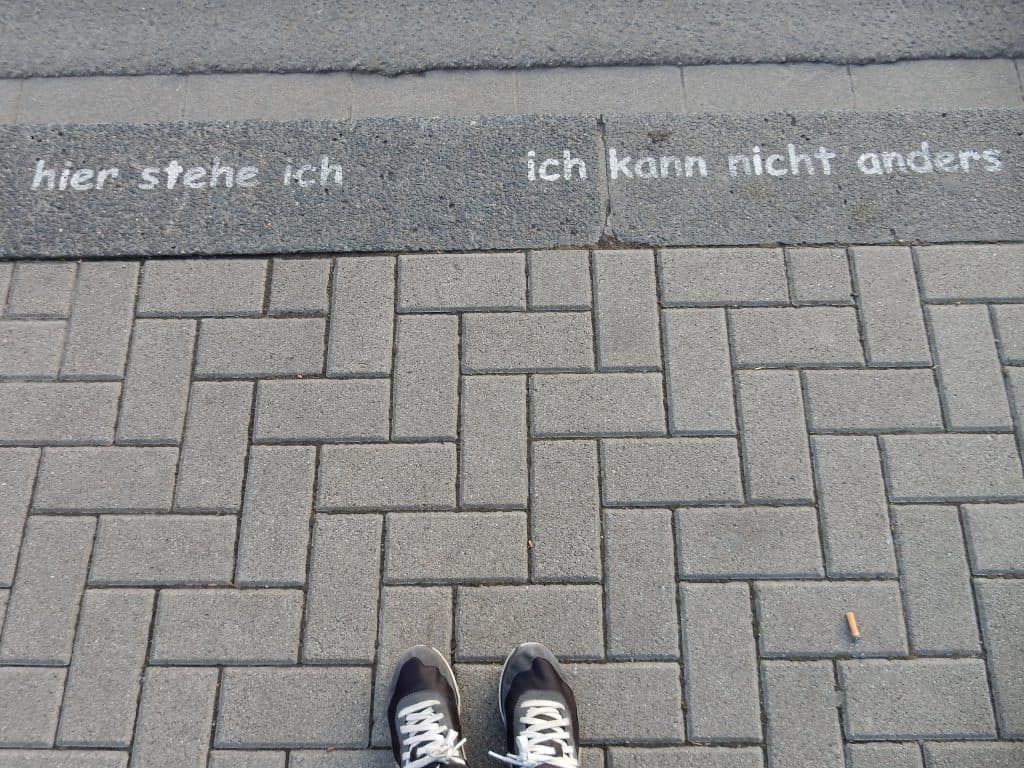 Other things to do in town? Worms might seem a sleepy town at first glance, but discoveries can be had around the corner.

If you’re from St Albans just north-west of London, or Mobile, Alabama, you’ll be interested to know Worms is your twin city. 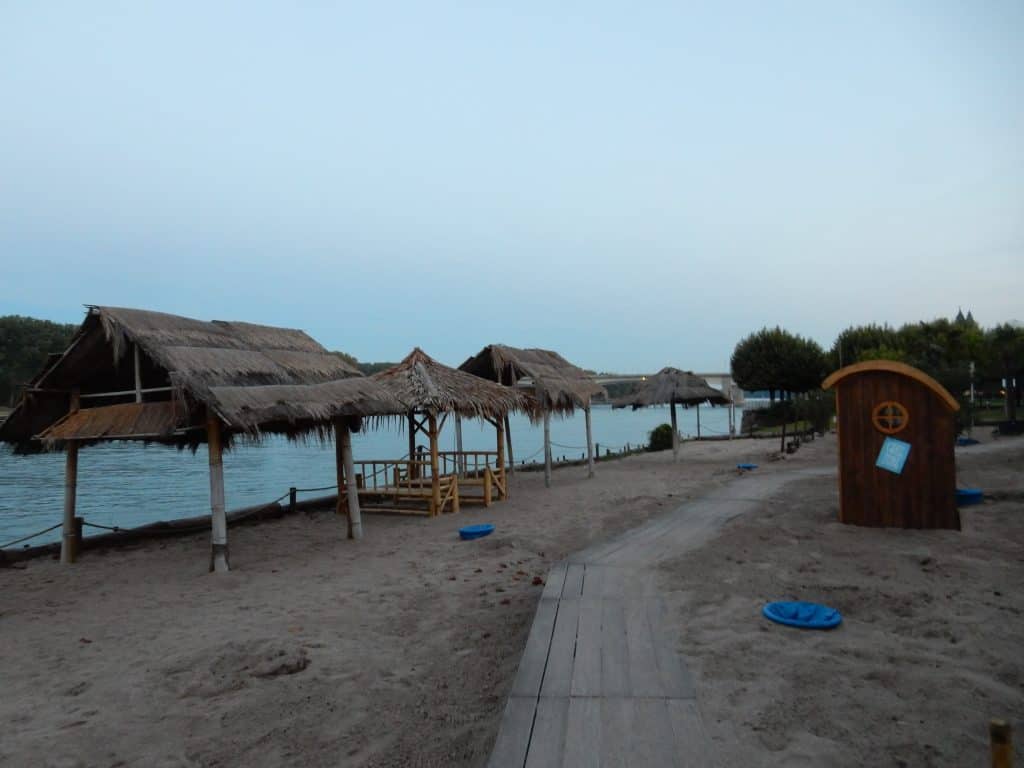 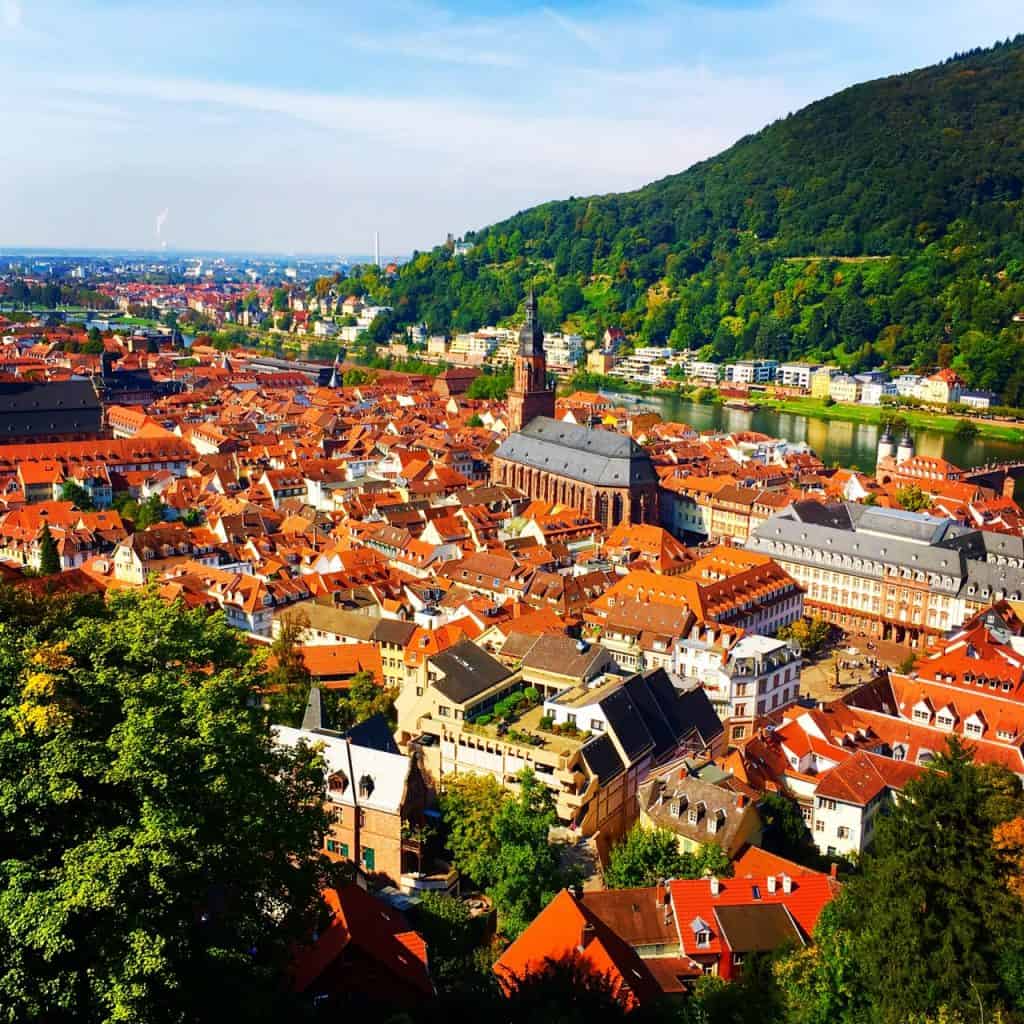 Heidelberg seen from the castle

From the infamous Diet of Worms of 1521, we’ll travel a few years back in time to 1518. In the ancient university town of Heidelberg, Luther spoke to theology students, including Martin Bucer, known as the Reformer of Strasbourg, Theobald Billican (Nördlingen), and Johannes Brenz (Stuttgart), and others. They went on to spread the Protestant message all over south-west Germany, making it old school viral.

In Heidelberg, you’ll find traces of Luther at the old University, in the auditorium and on a plaque on University Place. 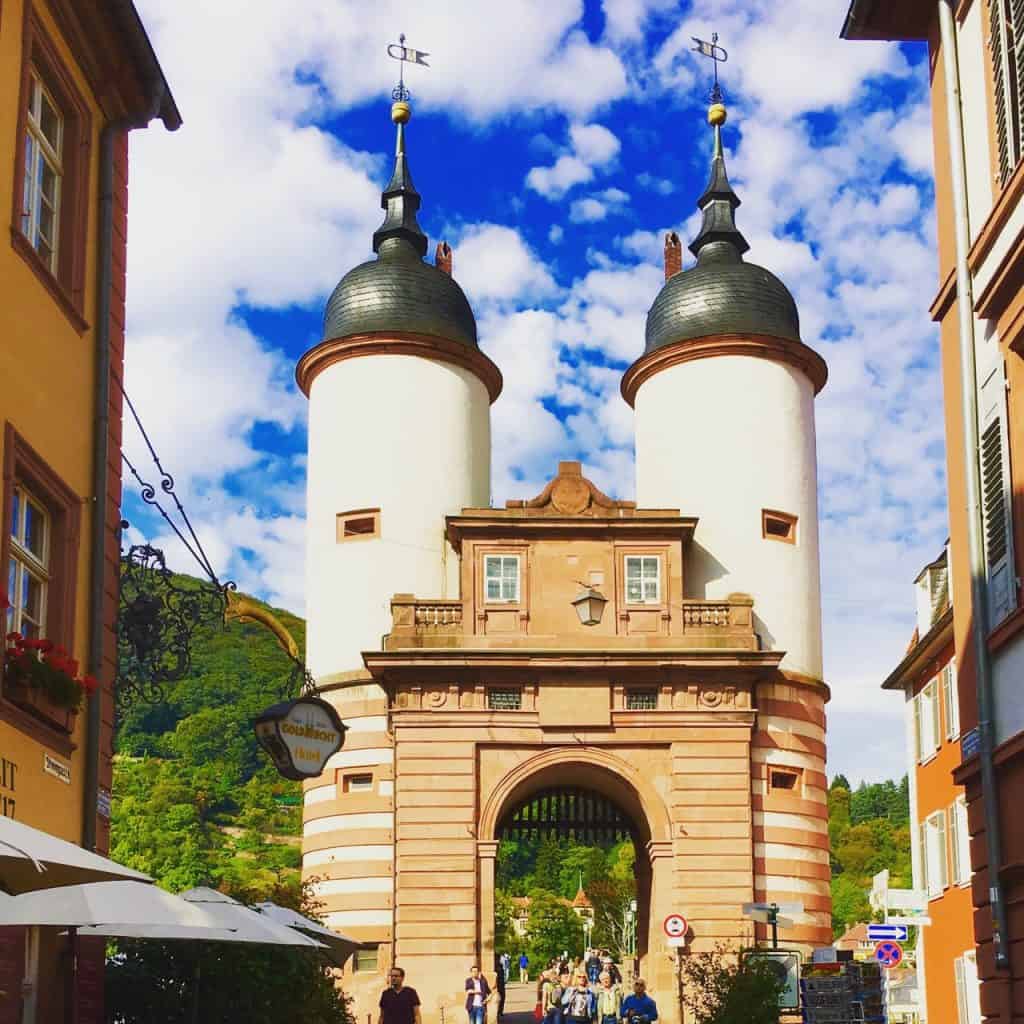 What else can you do in Heidelberg? This is such a cool city, it’s worth numerous posts in its own right (which I might just get to). Here’s but a few things to do in Heidelberg: 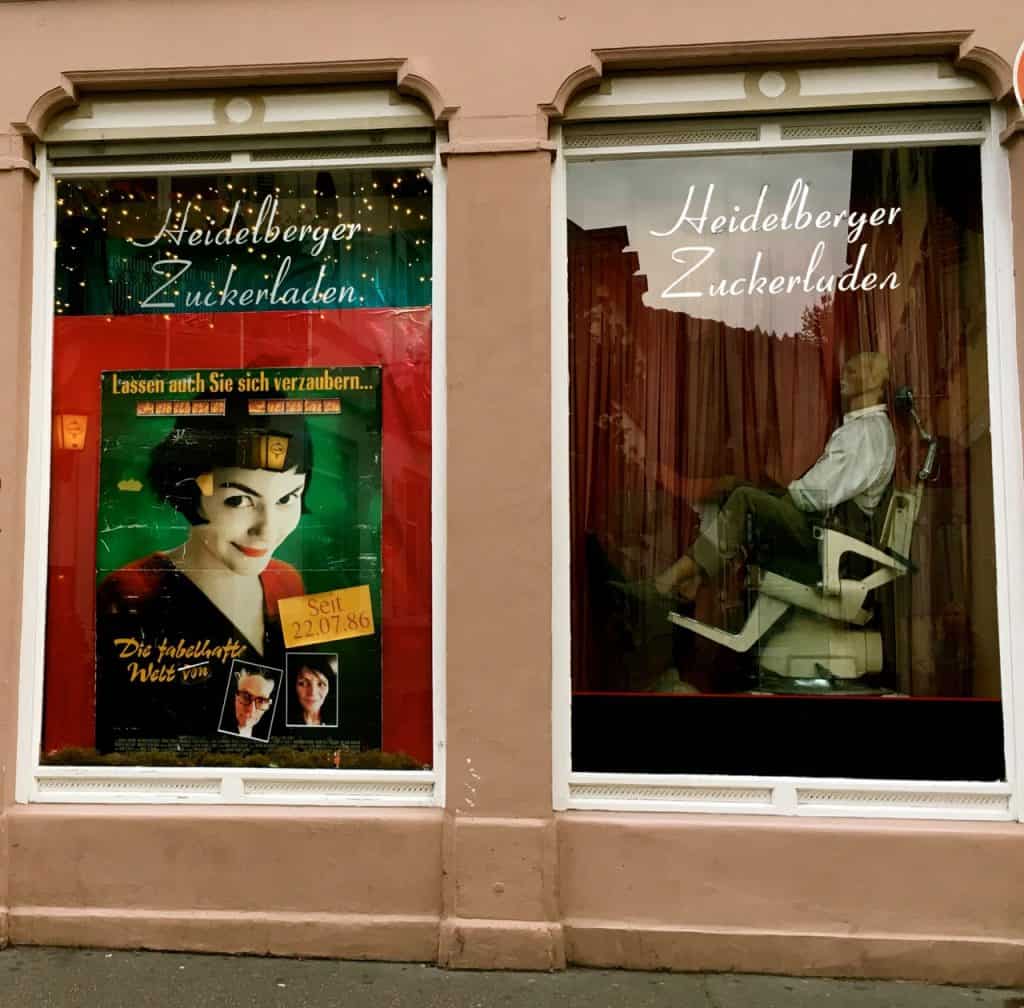 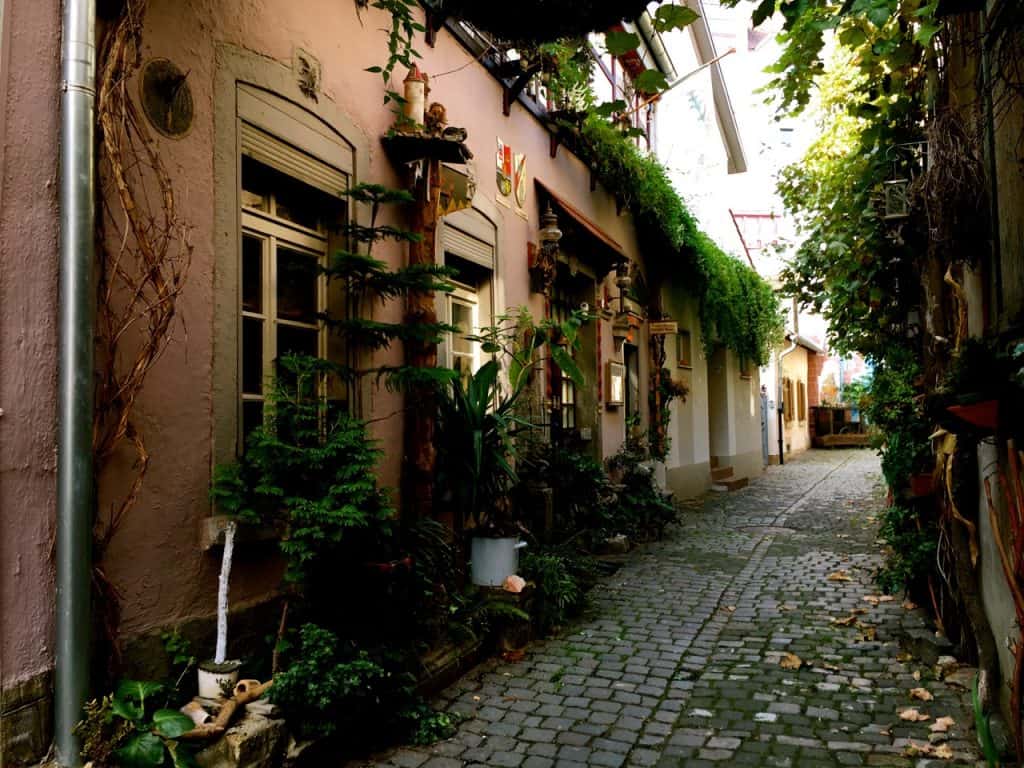 Remember how the Diet of Worms banned Martin in 1521? Eight years later, six princes and the representatives of 14 free cities protested against the ban. This is known as the Protestation at Speyer, and is the first time the supporters of this new religion were called ‘Protestants’. And thus Christianity was divided. From then on, and ever since, it’s Catholics and Protestants.

You’ll find a tall Luther statue in the Gedächtniskirche (Memorial Church), in memory of this historic event. 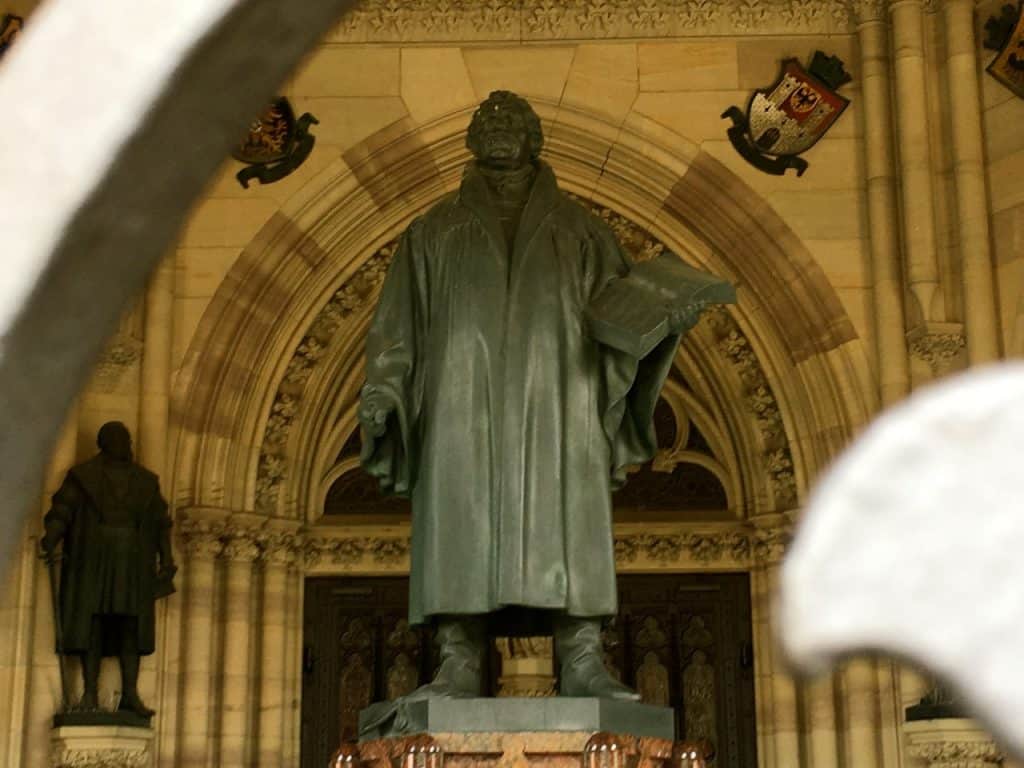 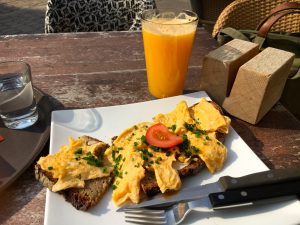 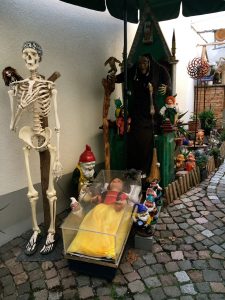 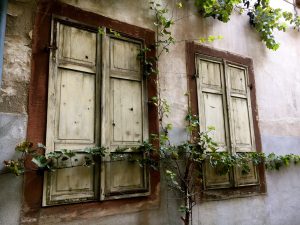 Twin cities include Spalding in the UK and the fascinating city of Chartres outside Paris. 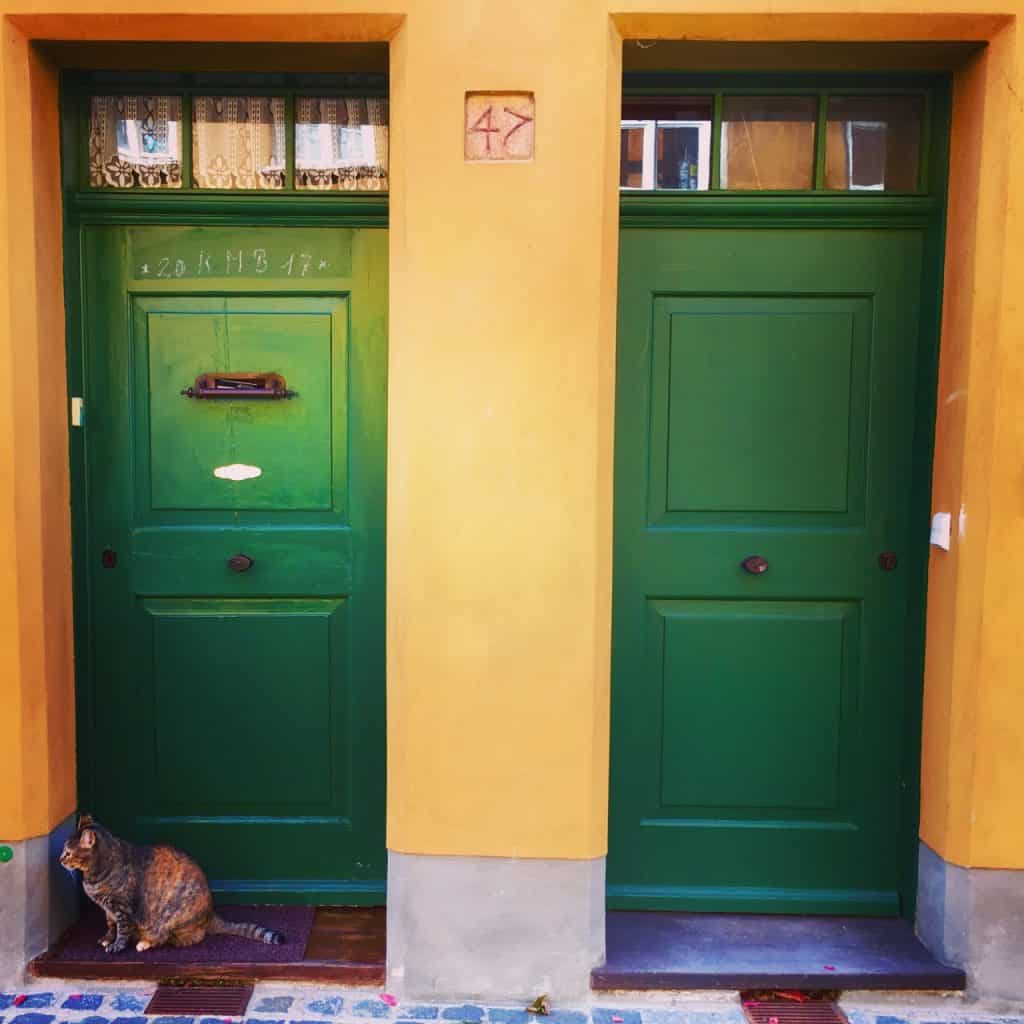 We’re hopping back and forth in time here – and in Augsburg we’re returning to the year 1518, when Martin Luther refused to recant his theses during a hearing at the Fuggerhäuser in Augsburg. 12 years later, in 1530, the Augsburg Confession was read out before the powers that be. This is the primary confession of faith of the Lutheran church. 25 years later, the religious peace of Augsburg gave followers of the Augsburg Confession religious freedom.

In Augsburg, you’ll find traces of Luther in St Anne’s Church, in the Lutherstiege (the Luther Staircase Museum), including a room he stayed in. 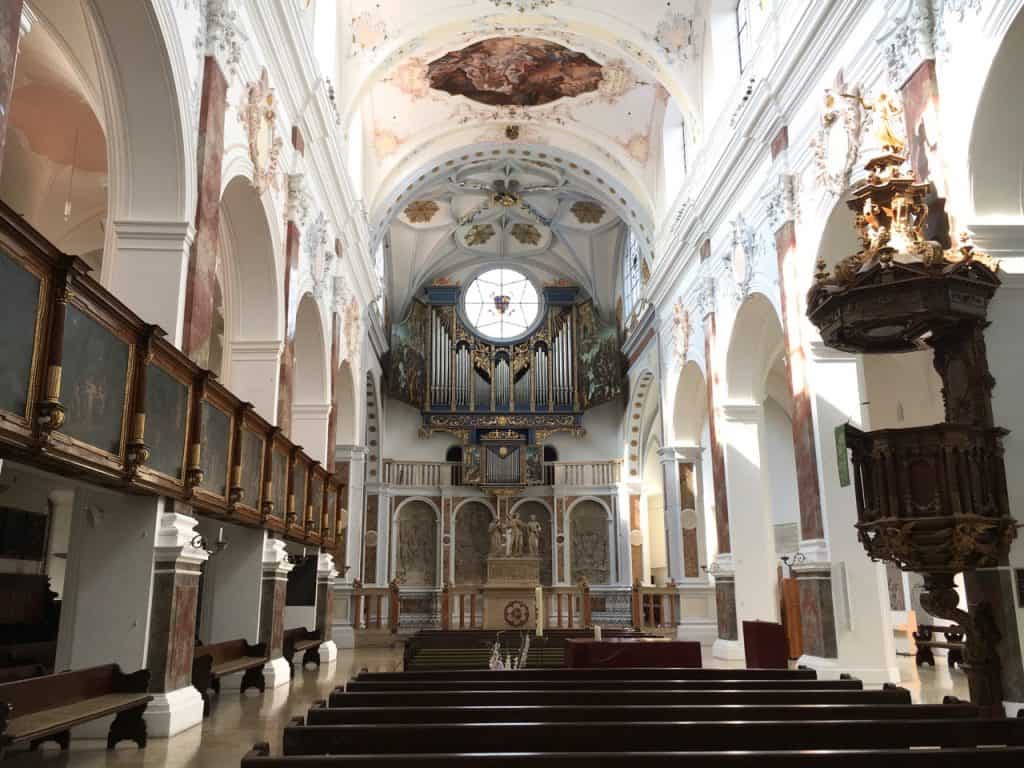 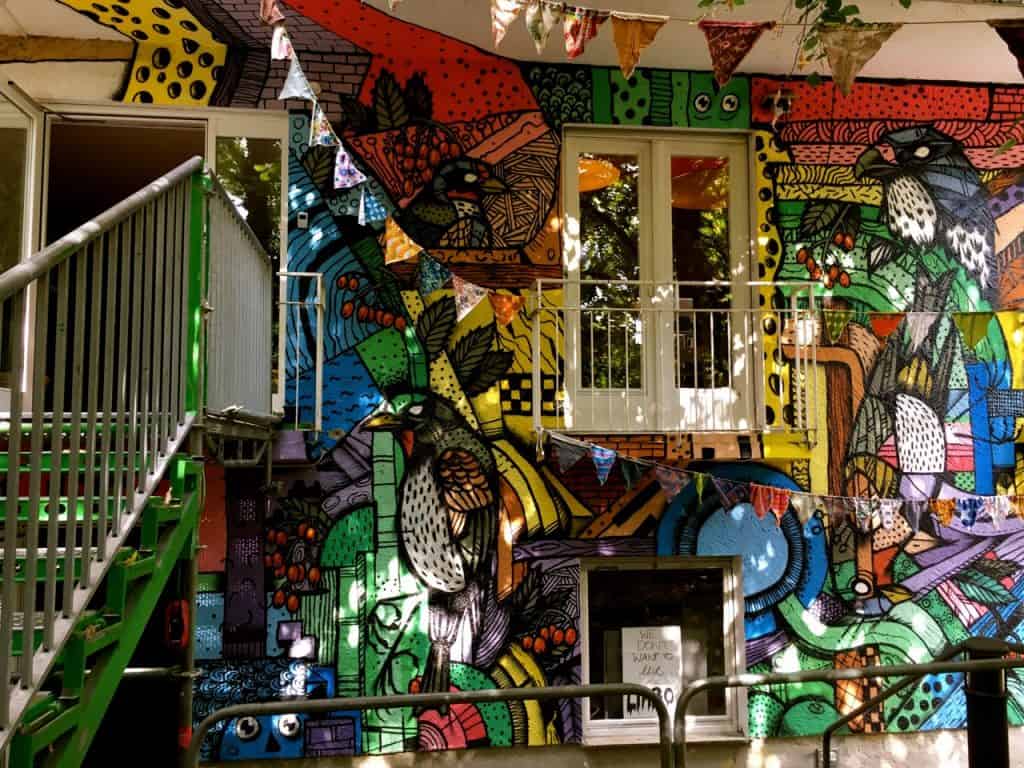 Augsburg’s partner cities in the English-speaking world are Inverness in Scotland and Dayton, Ohio.

There! I think you’ve got enough reasons to visit these four cities, either in search of Martin Luther, or just to experience it all, or both! And yes, I know, we’re way past 11 things to do. Think of it as a bonus. Have fun!

Disclosure: I’ve followed the Luther trail, sometimes on my own accord and sometimes at the invitation of someone else. This road trip through Worms, Heidelberg and Augsburg is part of the campaign #Luthercountry, created by iambassador in cooperation with the German tourist office. Any opinion is mine, all mine. As always, as ever.