Tintagel – or King Arthur, part I 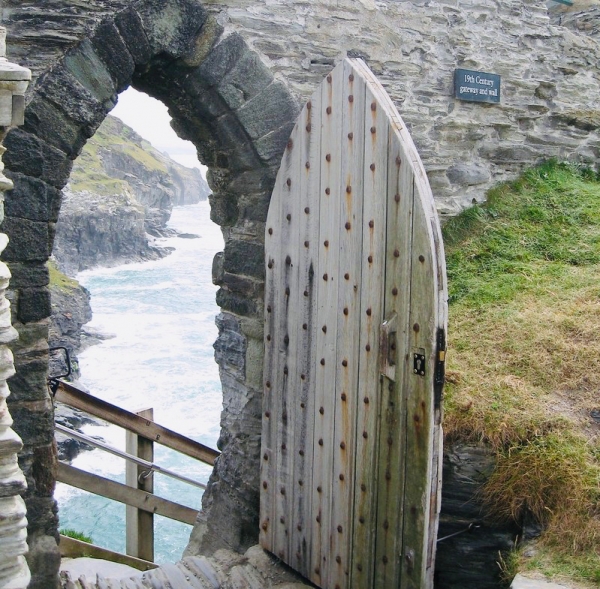 In today’s chapter of Cornwall Sunday, we’ll go to Tintagel and meet King Arthur for the first time. It surely comes as no surprise the legendary leader was conceived in Cornwall, land of magic and mystery. 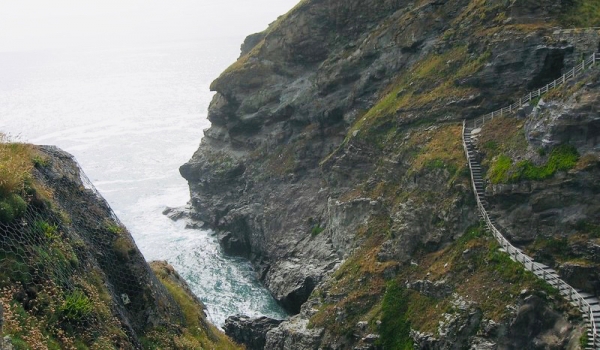 The tales of King Arthur first appears in Geoffrey of Monmouth’s History of the Kings of Britain, written in the early 1100s. Have you heard the story of Arthur’s conception? It’s a tale of passion and deceit. (Clearly, nothing is new in the world).

King Uther Pendragon lusts after Igerna, wife of Gorlois, the Duke of Cornwall, who lives at Tintagel. To have his wicked way with her, he enlists the help of the wizard Merlin, who gives him a drug that makes him look exactly like Gorlois. Uther then goes to Tintagel, where, Geoffrey relates, he

‘… spent the night with Igerna and satisfied himself with the lovemaking he had longed for, for he had deceived her by the guise he had assumed.’

‘Believing him, therefore, she denied nothing that he asked. That night also she conceived the most renowned of men, Arthur…’ 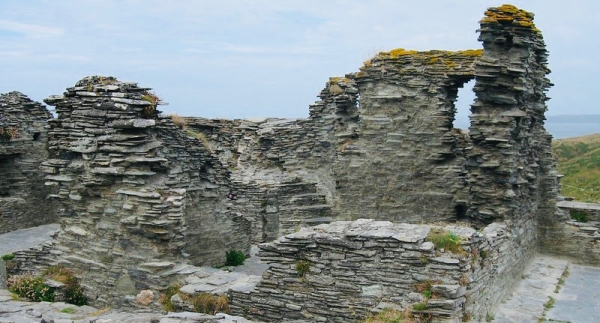 Did King Arthur exist? Historians disagree. Many believe he’s completely mythical, others think he’s based on a 5th or 6th century leader of the Britons who fought against the Anglo-Saxons.

Meanwhile, a drug that makes you look exactly like someone else … intriguing, no? Just imagine what you could do. I think I might change into a Muslim – probably a man – so I could visit the Kaba’a in Mecca. Or into just any ol’ man – to have a look at Greece’s Mount Athos. It irks me no end, that there are still places in the world off limits to one gender. But I digress.

Arthur or no Arthur, Tintagel Castle did indeed exist. Arthur wasn’t conceived in the castle, however, because it was built in 1233, seven centuries after Arthur’s time. Interestingly, though, lots of high-quality glass and pottery from the 5th and 6th centuries have been excavated here, and there’s evidence of a settlement from Roman times.

Tintagel is one of the most famous properties under the care of English Heritage, and owned by the Duchy of Cornwall, i.e. Camilla, Prince Charles’ wife.

The castle (or ruin) is about a 30-minute walk from Tintagel village, down a steep hill. There is a Land Rover shuttle for a small fee, a nice option for going back up afterwards.

From the bottom of the hill, there’s a good climb up the cliff to the ruins. Watch your footing! Not a climb for sufferers of severe vertigo, and not exactly wheel-chair accessible. My 8-year-old complains out loud all through the climb up the long, narrow stone stairways. But once on top, she adores running around, climbing, and doing cartwheels on the castle grounds. Of course. 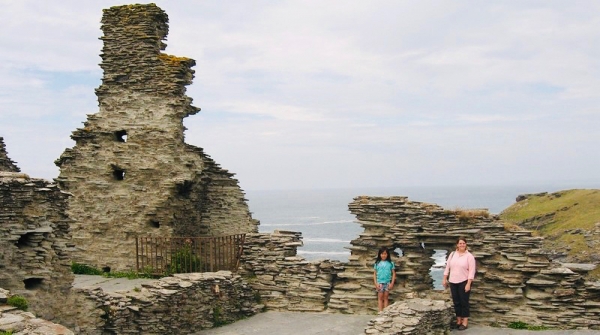 Back home in Port Isaac that night (more on Port Isaac in a later post), we are recognised by a Faroese man who remembers her well (not that many Chinese-looking girls yelling loudly in Norwegian at Tintagel that day, apparently). He and his wife are now our friends; we’ve met up later in the Faroe Islands. 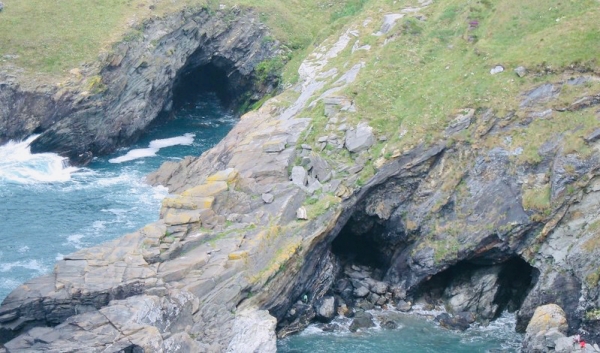 Tintagel is a fascinating ruin to explore, on top of steep cliffs with crashing waves, caves, grottos and fantastic views. There isn’t much left of the castle; a vivid imagination is a bonus. The ruins lie on two sides of a rocky outcrop facing the forceful Celtic Sea. One part is on a huge rock, separated from the mainland, and connected by a somewhat unnerving bridge. 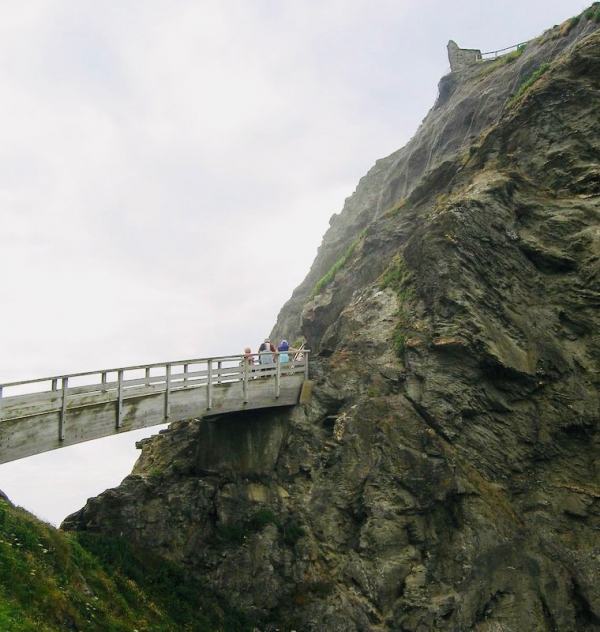 We are here in early July, before the British school holidays, so it isn’t very crowded. Just a few weeks later, and it would have been a different story, I am told.

For a completely different feel, I think I might like to visit in say November. The bleakness of late autumn, windy, misty, maybe even a cold drizzle… in short, a bit of pain and suffering. 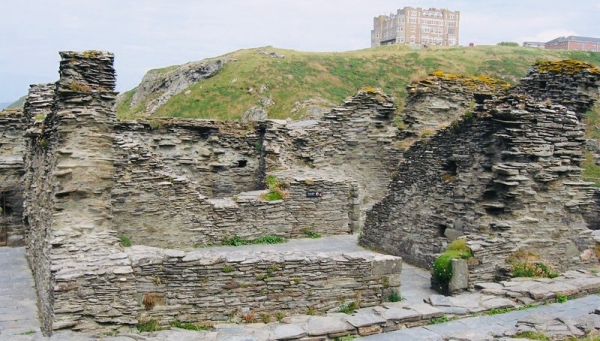 The little village of Tintagel has quite a few pleasant cafes and pubs, and, unsurprisingly, heaps of little shops selling all things Celtic and all things hippie. (Yes, we bought some crystals and … things.) 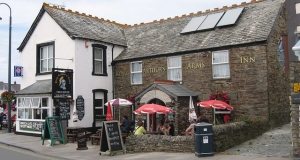 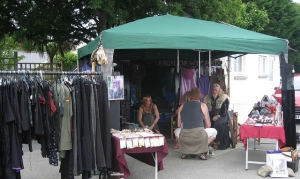 King Arthur isn’t the only one associated with Tintagel. The tragic ending to Tristan and Isolde’s love story also takes place here.

Tristan is a Cornish knight who is entrusted to go to Ireland and fetch his uncle’s wife to be. The lovely Irish Princess Isolde (also known as Iseult or Yseult) has a love potion meant for her coming husband, King Mark. But Isolde, you see, gives it to Tristan instead (the jury is out as to whether she did this on purpose or by accident – although a middle-aged king vs a young, brave, probably dashing knight… what do you think?).

Isolde marries the king and Tristan marries another, but they continue to love each other. Mark discovers the affair, and stabs Tristan with a poisoned lance. Isolde is the only one who can heal him so he sends a friend to bring her to him. If the friend returns with Isolde, he’s to raise a white sail on his boat; if not, a black sail. Of course Isolde says yes, but Tristan’s jealous wife tells the mortally wounded knight the sail is black. Thinking Isolde betrayed him, Tristan dies of grief. Minutes later, Isolde appears, discovers Tristan’s dead body, then dies of grief, too. This all takes place at Tintagel. 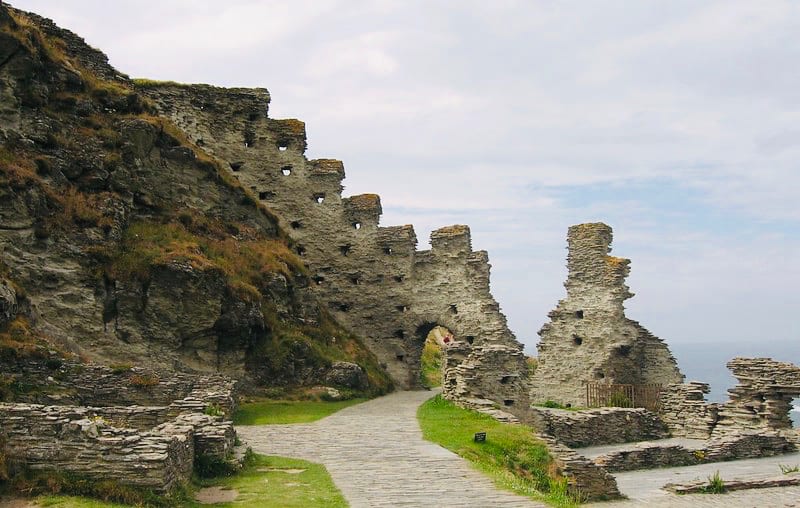 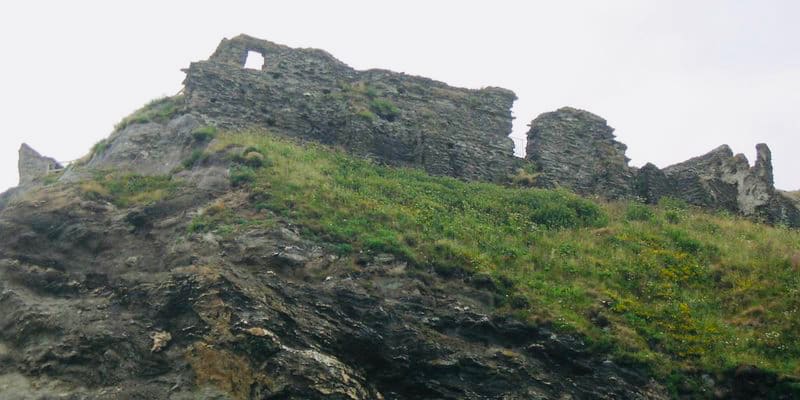 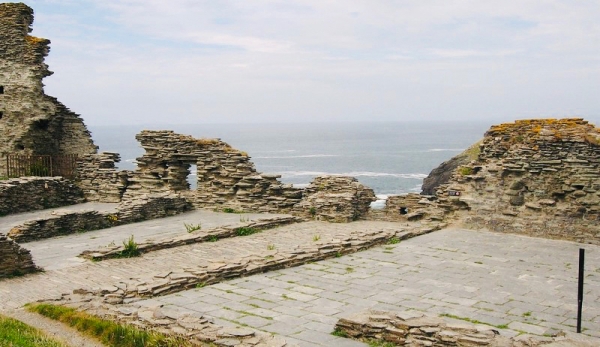 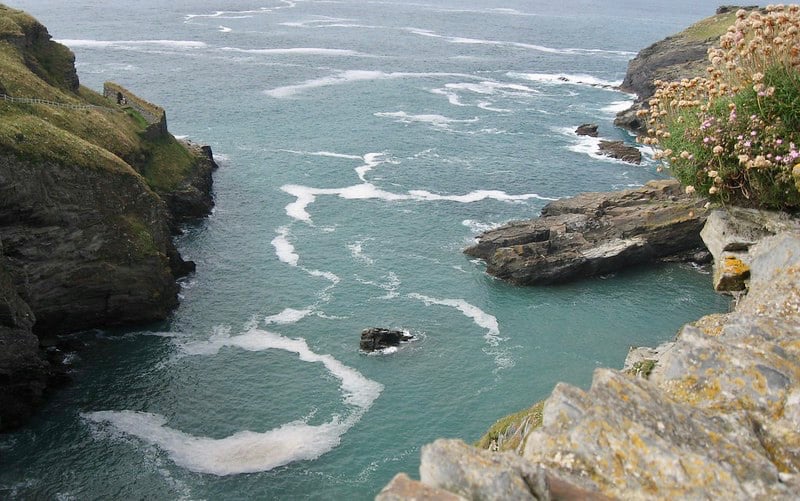