I haven’t been in Moscow in many, many years. Not since it was capital of the Soviet Union and Yuri Andropov was head of state. In fact, Andropov died during my stay in town, and a visit to the Bolshoi was cancelled as a result. I’ve plans to return soon (and see the Bolshoi). Meanwhile, writer Matt Gardner shares a few Moscow travel tips. Enjoy!

There are few cities on earth as vast – and as mind-blowing – as Russia’s capital. Visitors from around the world are attracted by Moscow’s rich tapestry of history and architecture.

As the northernmost megacity on the planet, it’s now home to well over 11 million people, making it the world’s sixth largest. Once jewel in the crown of the Soviet Union, Moscow now thrives, somewhat ironically, as the city of choice for the world’s billionaires. It’s one of the most surprising places to visit, whether it’s your first time or tenth.

In terms of infrastructure, Moscow has everything you need to stay comfortably and travel easily. Due to the numerous cash injections the city has received since the fall of Communism, it is now home to good hotels such as Hiltons and Marriotts, and more luxurious offerings, like the Kempinski Hotel Baltschug. Getting from one place to another is easier than nearly anywhere else on earth, too; the Moskovsky metropoliten is the third busiest transport system after those in Tokyo and Seoul. And, the unique and beautifully decorated stations are in themselves reason enough to take the metro.

Dazzling architecture carries on above ground. The first thing that people often associate with Moscow is Saint Basil’s Cathedral, the colourful church that sits just outside of Kremlin on Red Square (so close, in fact, that it’s often mislabelled as the Kremlin itself). It was deconsecrated by anti-religious Bolsheviks in 1929, it survived Stalin’s urbanisation plans, and remains the most beautiful of Russian Orthodox monuments. Kremlin and Red Square were inscribed on UNESCO’s list of World Heritage sites in 1990. Kremlin is Russian for fortress – and is exactly that. Used as the official residence of the president of the Russian Federation, it comprises four palaces and cathedrals, as well as the world-famous Kremlin Wall that runs alongside the River Moskva, displaying its characteristic towers and notches. The Spasskaya Tower, Saviour Tower, is the Kremlin’s main through-passage, and overlooks the Red Square; nearby, you can see the Tsar Cannon, listed in the Guinness Book of Records as the largest bombard by calibre in the world.

Back to Red Square, visitors can head to Lenin’s Mausoleum. His embalmed body has been here since 1924, and is the centrepiece of the wider Kremlin Wall Necropolis. (I remember queueing for hours on a freezing cold February morning – along with a surprising number of locals – to see Lenin’s corpse. Ed.). The full complex was created in November 1917, when 240 pro-Bolshevik bodies were buried after the October Revolution. In March 1985, Communist premier Konstantin Chernenko was the last dignitary to be buried here. 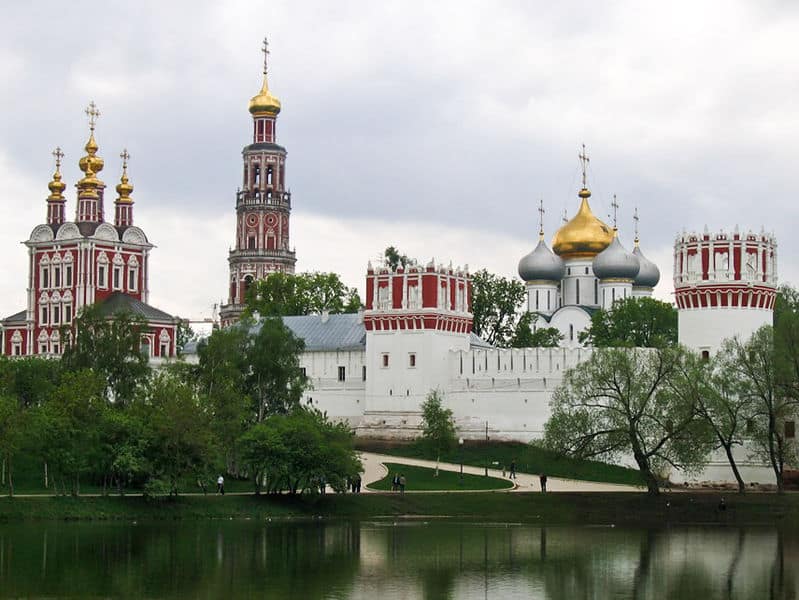 Heading a little further out of the city will bring you to plenty of other famous landmarks. One of the most interesting is Novodevichy, surprisingly often overlooked in spite of its UNESCO World Heritage status. The convent’s red and white walls and towers are adorned with beautiful golden domes. The former royal estate Kolomenskoye is further down the River Moskva. Don’t miss its 16th century Church of the Ascension, yet another World Heritage site. Finally, for something a little different and harking back to Russia’s more recent past, head to Fallen Monument Park. Once called the Park of Fallen Heroes, this strange-yet-fascinating place is located between the Park Kultury and the Oktyabrskaya underground stations. It features over 700 sculptures, including dozens of Stalin and Lenin; you may remember it from the James Bond-film Golden Eye.

This post was brought to you courtesy of our partner, Kempinski hotels.