I’m in Southern Lebanon today; joined by 6 Brits and an American couple (the woman went to university in Beirut in 1964!) and our cheerful guide Pierre, all wanting to have a look at the Roman ruins in Tyre. Or Ksour, the city’s present-day Arabic name. 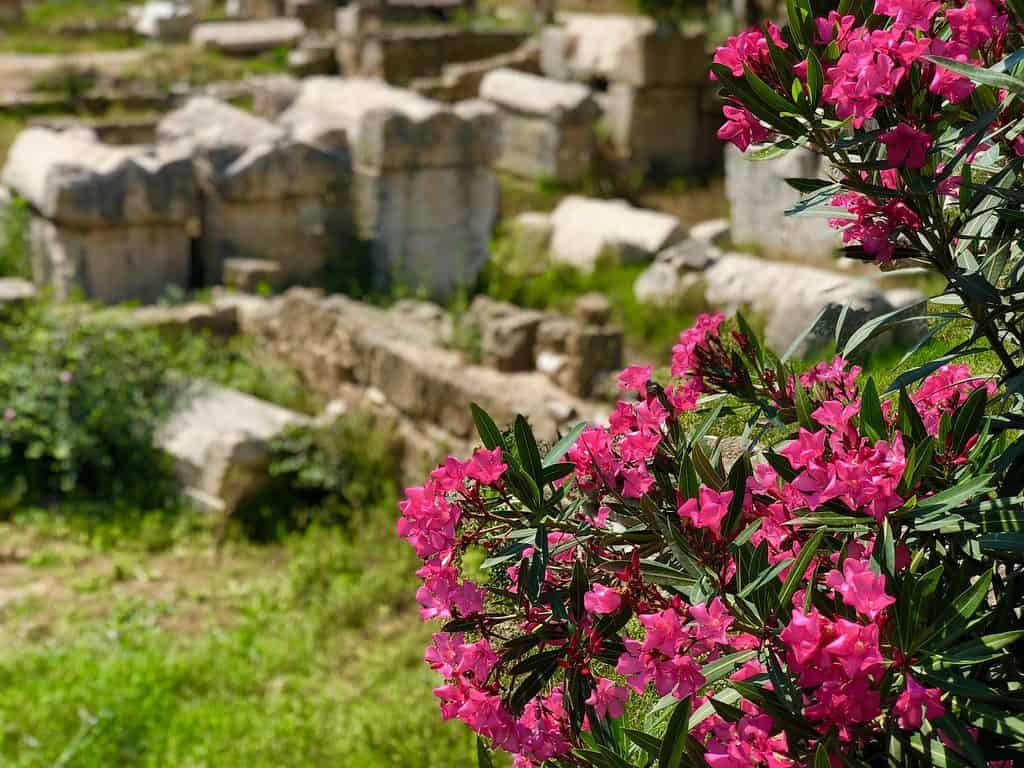 We’ve driven 82 km south from Beirut, a picturesque coastal drive. We’re also 25 kilometres from the infamous Israeli border. This was once inside the danger zone. Not anymore.

During the Lebanese Civil War, many of my school mates joined the UN Interim Force In Lebanon (UNIFIL), charged with reducing tensions. Norway had more than 21 000 soldiers on the ground here, about 20 times more than any other nation. Today, the Norwegian soldiers are gone, but there are still a few UNIFIL soldiers in Lebanon, by the Israeli border, the so-called Blue Line.

That border has been closed since 1948, and unless you’re UN staff, you can’t cross. Going from Tyre to say Acre across the border in Israel, the most direct route would be around 30 km, crossing at Rosh Hanikra. No can do. Instead, you’ll have to go a roundabout way, about 460 km roundabout, covering five countries: north to Beirut, then east into Damascus, south to Jordan, and back west through Palestine and into Israel. One big circle.

The bright turquoise ocean is beautiful on this lovely Mid-May day. The pink oleanders as well. No need to think of danger; things are pretty laid-back and relaxed these days. So let’s get on with our explorations of ancient Tyre. 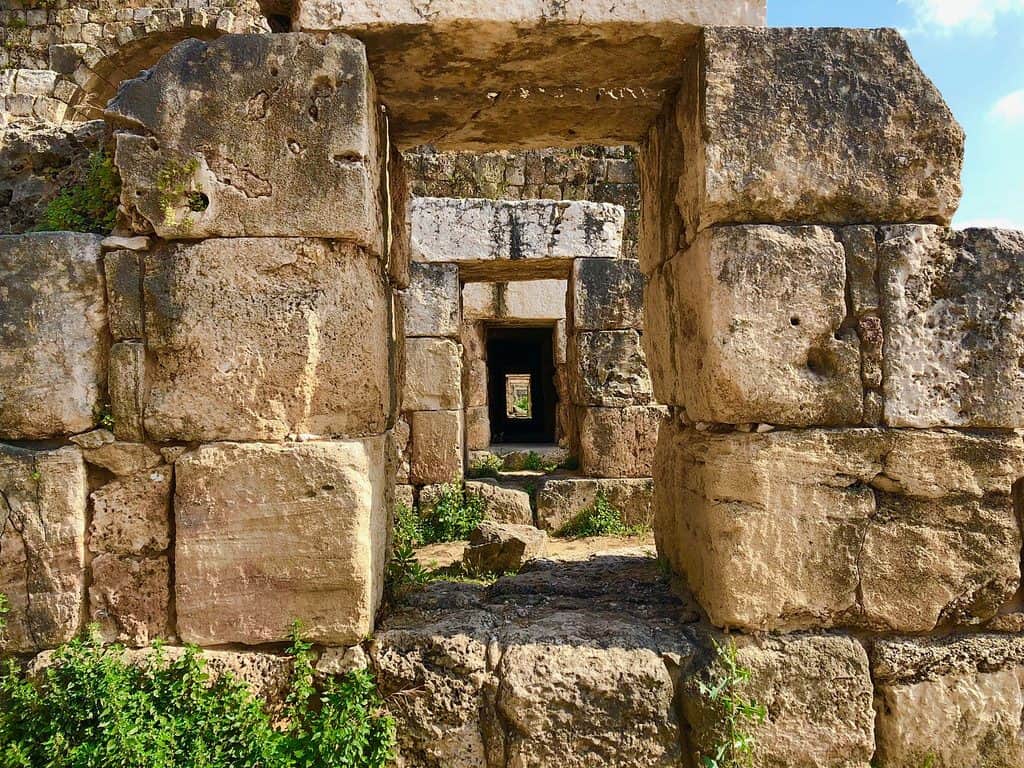 The good Dido was born back in 839 BC – in Tyre. You think being a teen is tough today? Well, I bet Dido had it even tougher. She married young – for love, one must presume. When she was only 14, her brother Pygmalion brutally murdered her husband Acertos to get his hands on his fortune. But Dido was a clever one. She took her husband’s funds and fled, ending up on the coast of North Africa where she founded the fabled city of Carthage.

Back in Tyre, Pygmalion was undoubtedly a murderous miscreant. But, according to the Phoenician historian Menander of Ephesus:

Not cutting the larrikin any slack, you understand. But it can’t have been easy being Pyggie either. A ruler at the age of 9! As childhoods go, that’s nothing to write home about, is it? Not much carefree playing and running about for that one.

Tyre was founded in 2750 BC. At least, that’s what Herodotus says. The city took over from Byblos (which we’ll come back to in a later post) as capital of Phoenicia from approx. 900 BC, and kept that title for about 350 years. The city has been conquered and conquered again. Having been around for almost 5 millennia, I suppose that’s unavoidable. Greeks, Romans, Arabs, Byzantines, Crusaders, Mameluks; they’ve all left their marks. Not to forget Alexander, the Macedonian; he came riding into Tyre along the nine columns here with his army – and took over town. Can’t you just picture it? A magnificent sight, it must have been. Magnificently scary! Alexander may have been the Great, but he wasn’t exactly mild-mannered. Here in Tyre, he found it necessary to execute 2000 of the city’s most upstanding men. 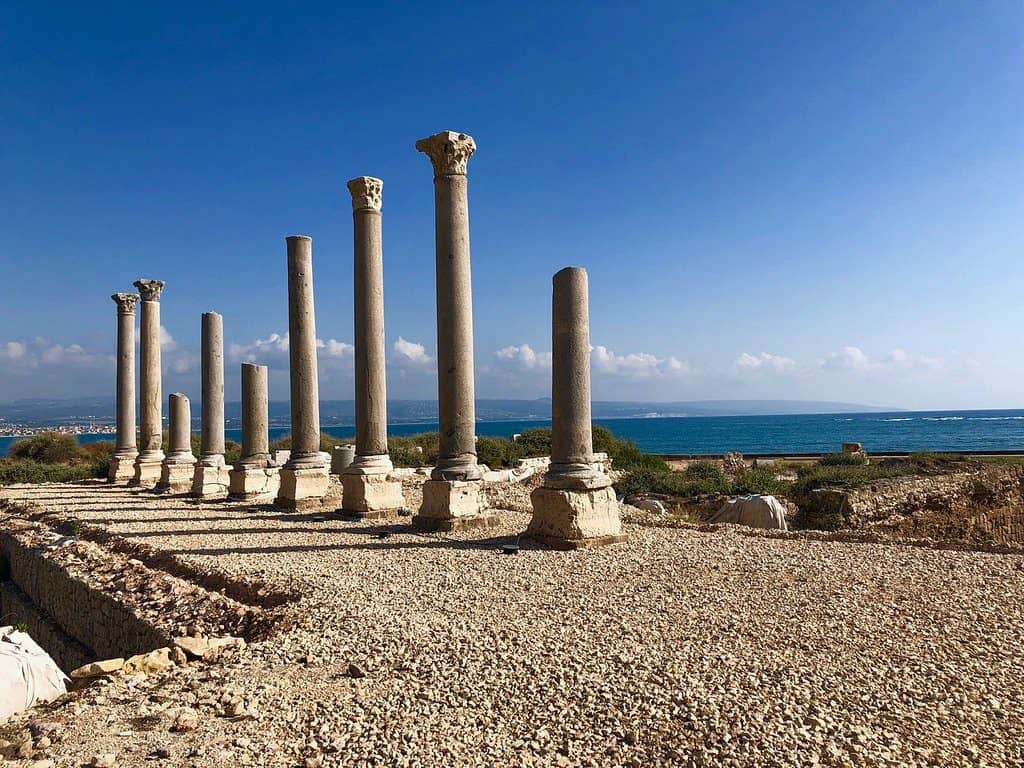 Who were these Phoenicians? Traders, that’s who. Seafaring businessmen. And very good ones, too. Along with the Greeks, they dominated the Mediterranean for centuries. Many present-day Lebanese I’ve spoken with seem to be rather proud of that heritage. What did they trade? Slaves, for one. Such were the days. But also wood and glass and purple. Yes, you read that right! Tyrian purple, a dye extracted from a sea shell called Murex. What’s so special about purple dye? Think royal robes.

The heritage site is divided in two: al-Mina and al-Bass. Al-Mina is on what was once an indestructible island and has Roman ruins and walls of a Crusader castle. Al-Bass is a necropolis, a city of the dead, with a hippodrome and an arch of triumph. How very Roman, indeed. 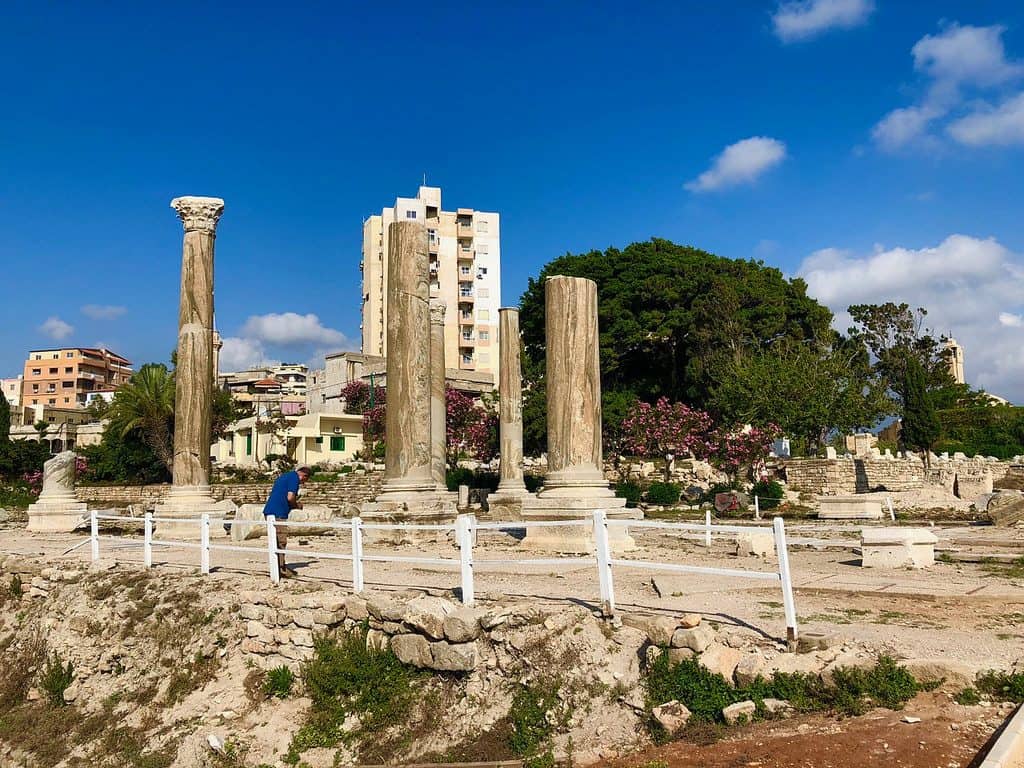 5000 year-old Al-Mina is on a promontory, and makes for a hazy wander along rows of columns down to an ancient harbour, now under water. You’ll walk along a street covered with Roman mosaics, past the remains of public baths, and a stadium. As to the stadium’s use, we can only speculate. Sports, probably. Isn’t it always? 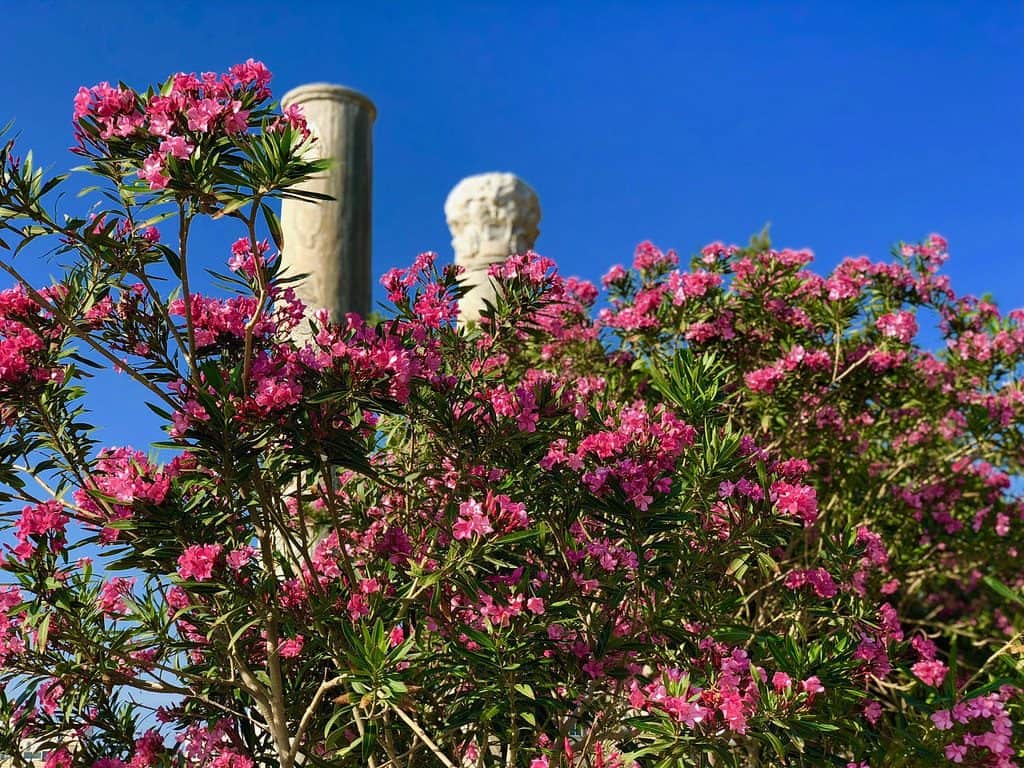 Al-Bass is very interesting – and very large. You might walk around here for hours under the relentless Middle Eastern sun, so unless you’re a lizard, slip-slop-slap, as the Aussies say: a shirt, sunscreen, and a hat, respectively. I’d suggest shades and a water bottle as well. 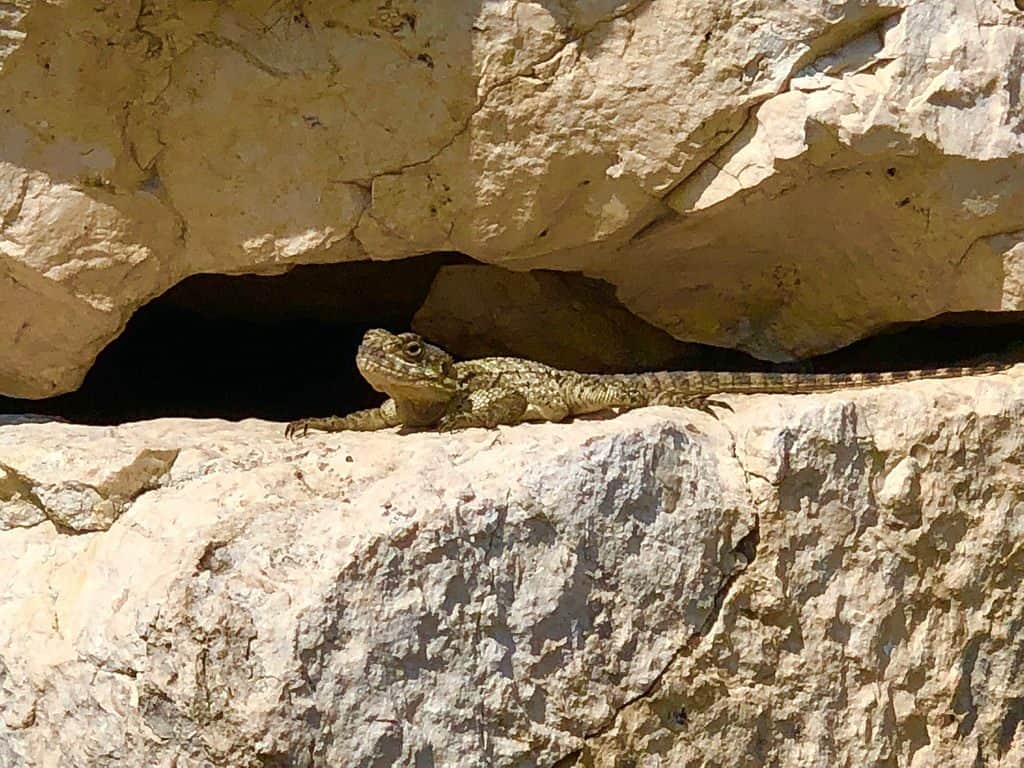 Just inside the entrance, the first thing you’ll stumble upon is a sprawling necropolis; a Roman cemetery, with bone-filled tombs and marble coffins. 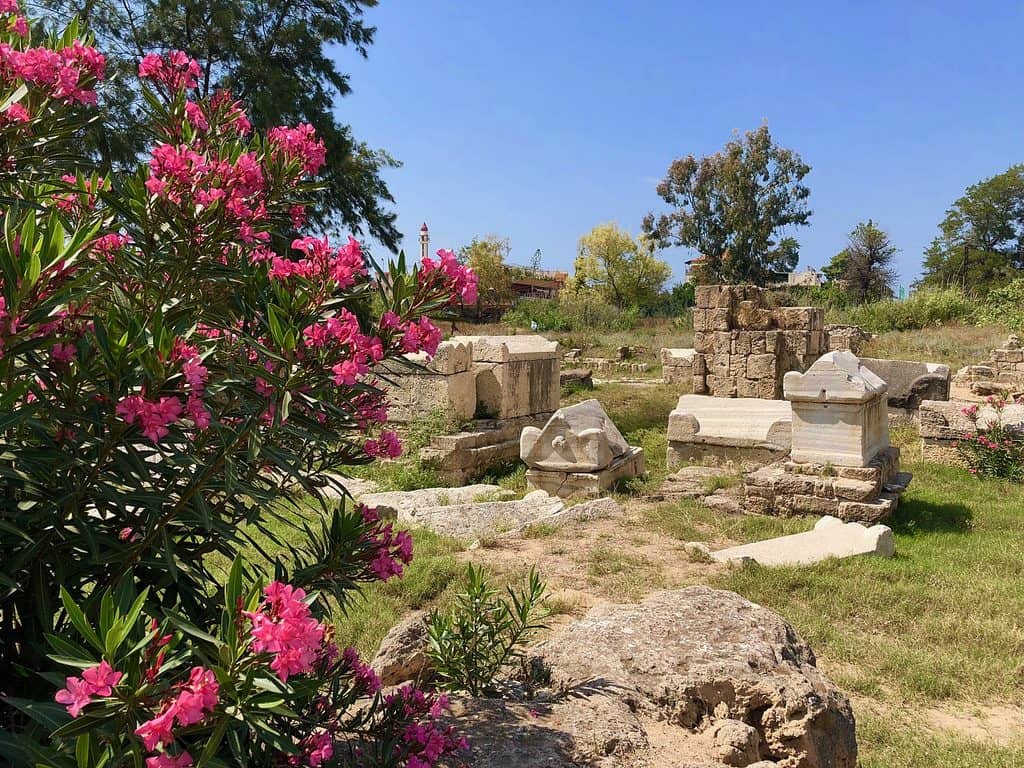 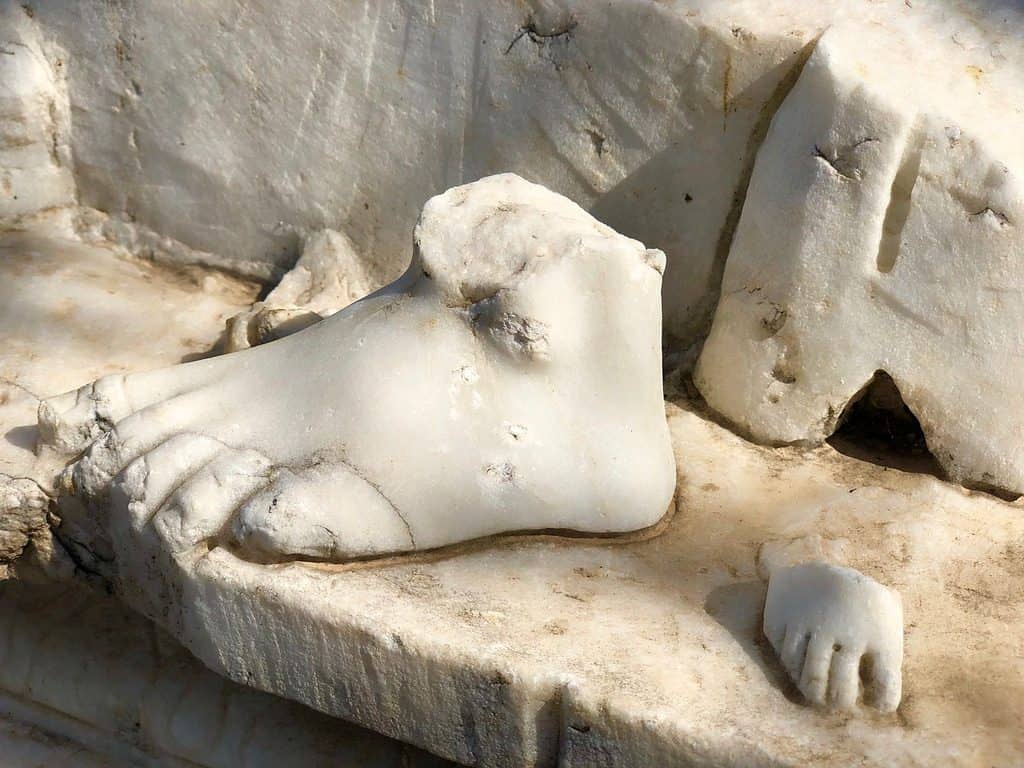 All along is an avenue, about a mile long, and straight as only Roman roads were… 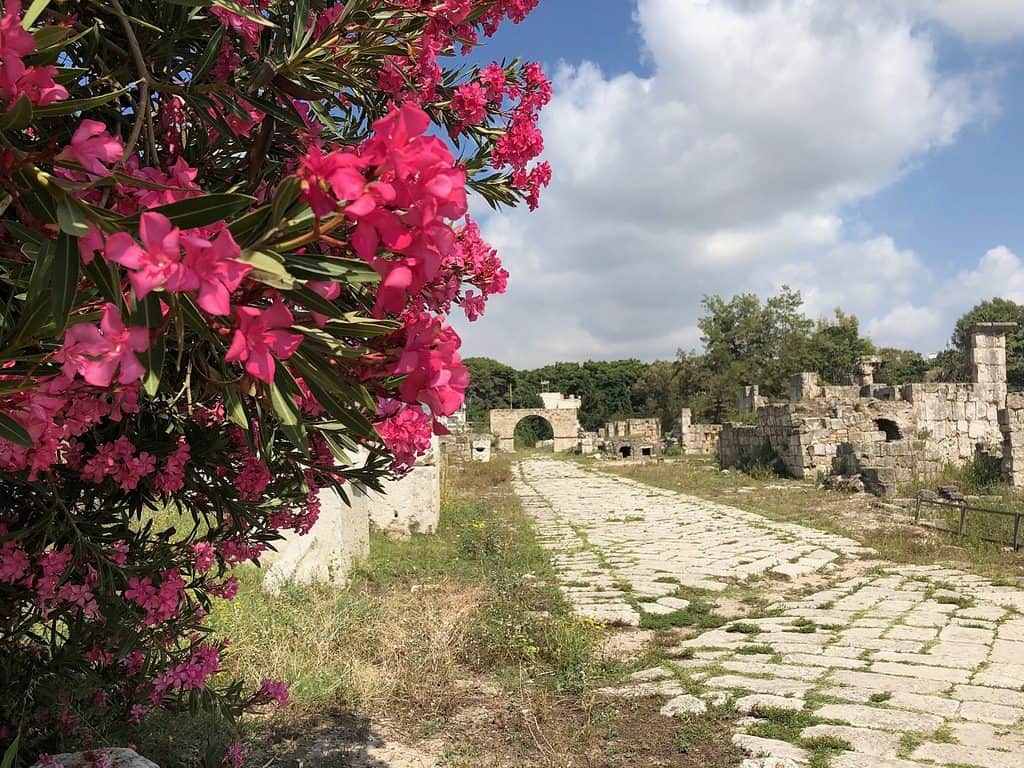 All roads lead to Rome – although Tyre is quite far away. 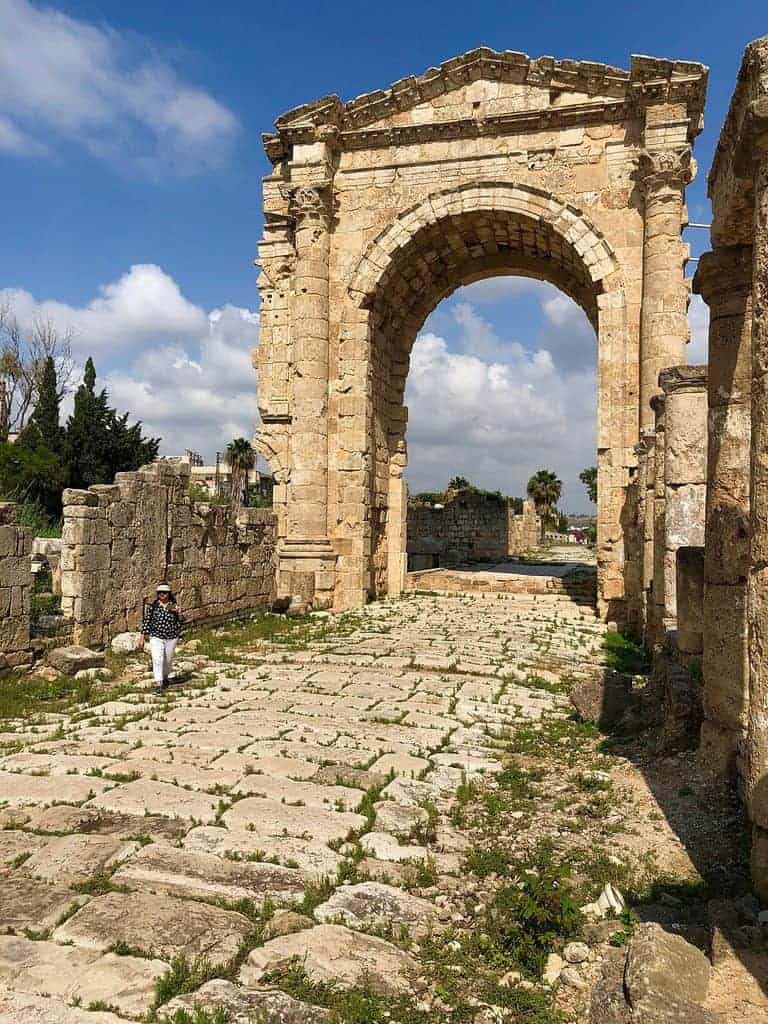 Not exactly swarming with visitors, Lebanon. Their loss.

To the side is a large field with an aqueduct… 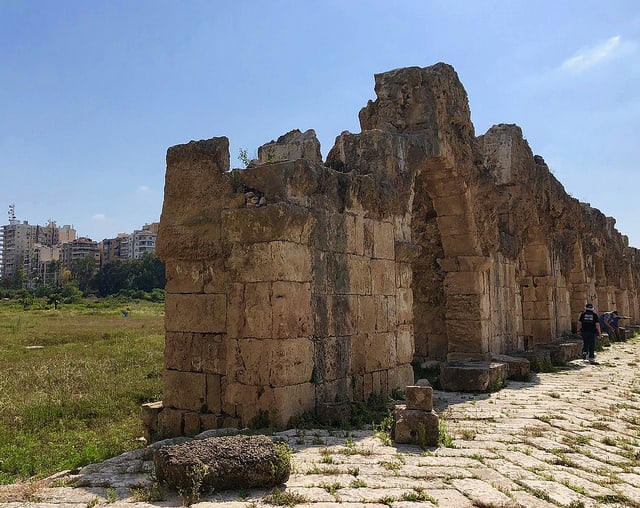 … and a hippodrome that once had room for an audience of 20 000, all keen to watch the chariot races. 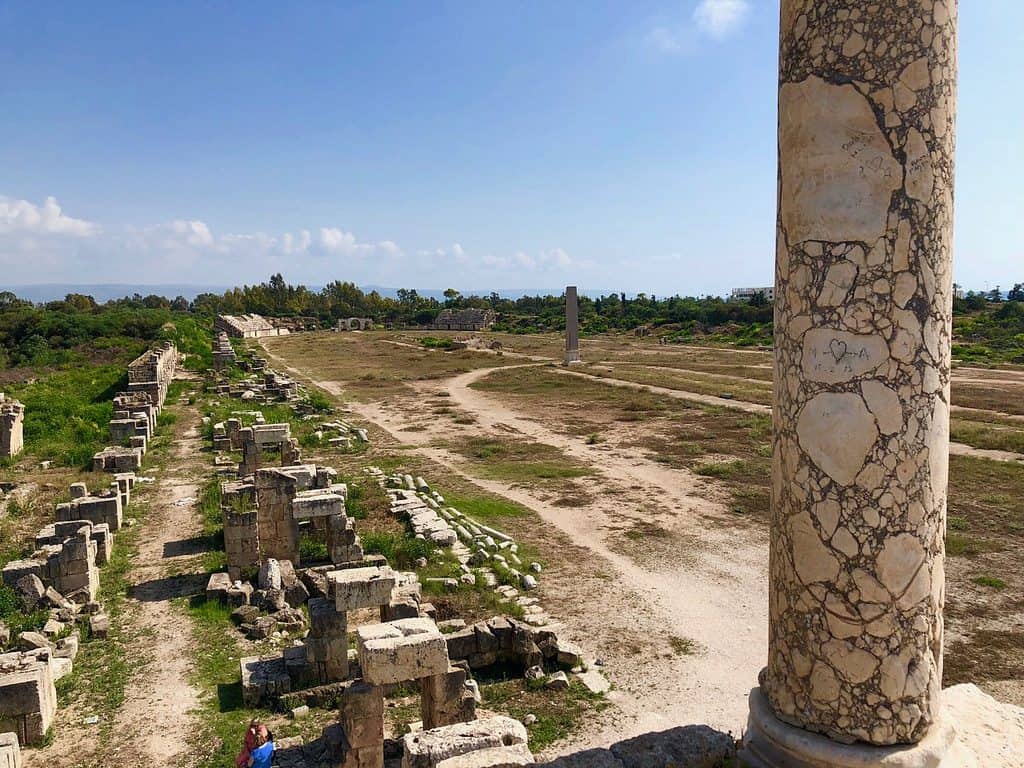 View from top of the hippodrome

Worth a visit? Definitely! Combine it with a stop in Saida (more on Saida coming up as well), on the way back to Beirut. You’ll be glad you did.