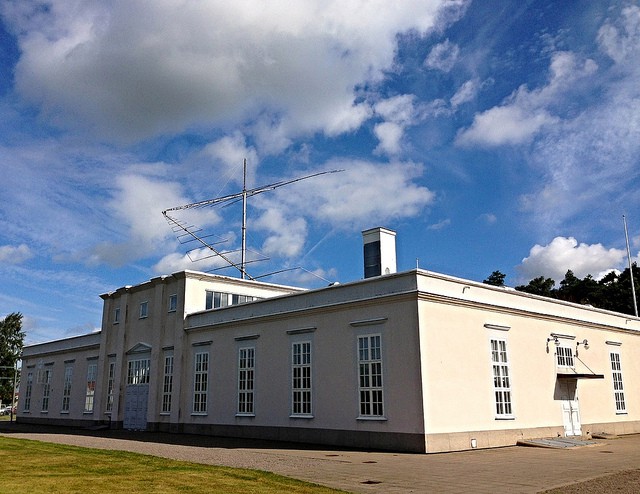 Spot the mast behind the building? It’s incredibly tall, completely dwarfing the trees around it.

Tomorrow – Friday 13 February 2015 – is World Radio Day; what better time to tell you about Grimeton Radio Station, one of the more curious UNESCO sites I’ve stumbled on in my quest to see, well… many of them.

Why would a radio station in Sweden be on the prestigious World Heritage list? In short, it’s because Grimeton Radio Station is the oldest radio station in the world still operative. Or as UNESCO puts it:

The Varberg Radio Station at Grimeton in southern Sweden (built 1922–24) is an exceptionally well-preserved monument to early wireless transatlantic communication … The site is an outstanding example of the development of telecommunications and is the only surviving example of a major transmitting station based on pre-electronic technology.

Now, unless you’re particularly interested in how people communicated in the days before the Internet and social media, that probably doesn’t mean much to you youngsters. But I remember those ‘pre-electronic’ days, and spending glorious summer weeks at a cabin with no TV (still don’t have one there – or mobile phone reception), and I can well imagine how exciting it must have been to speak with someone on the other side of the Atlantic for the first time.

If you’re keen to see how that all worked back then, the old transmitter is switched on a few times yearly, on Alexanderson Day (Sunday in late June/early July) and at Christmas Eve. If you happen to be in or near Gothenburg tomorrow (13 Feb 2015), there’s a transmission on World Radio Day as well.