World at a Glance: Valencia’s ancient silk exchange, a temple to trade (Day out Alicante) 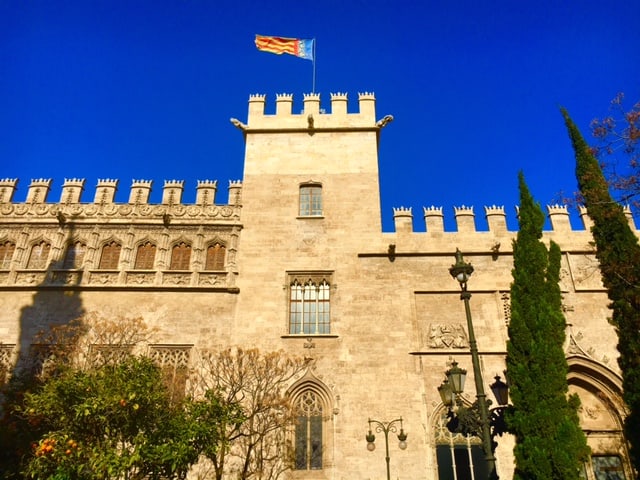 As you wander through Valencia’s lovely old city, you’ll come across a flamboyantly fascinating building with delicious details: grotesque gargoyles and fantastical figures surrounding the main doors. Be sure to move in close, there’s lots to look at.

This is La Lonja de la Seda, the city’s medieval silk exchange. Beginning operations in the early 1500s during the Golden Age of Valencia, it continued to function until the early 2000s; that’s a good 500 years of commodities trade!

Well, picture it is what you must do. That is how it used to look. Today, it’s all pinkish beige stone. Still stunning, albeit slightly more modestly. I’m reminded of Egypt’s Pharaonic temples, such as Karnak, where the tall columns in the Hypostyle Hall were once painted in bright blues, reds and golds. Today, you might see traces of how these used to look – but mostly it is just the bare stone.

The World Heritage committee inscribed Valencia’s silk exchange on its illustrious list in 1996, and justified it thus:

‘a wholly exceptional example of a secular building in late Gothic style.’

And that’s just it. It is a trade exchange – a very secular building, indeed – yet it resembles a cathedral. This, I’m told, was a deliberate move by the wealthy merchants of the time. One of the grand commercial cities along the Mediterranean, trade was largely responsible for that Golden Age. Despite this (or perhaps because of this?), trade was looked down upon, so the merchants decided to emulate religious architecture. A temple to commerce?

They must also have felt the need to defend (or at least explain). As you walk around the hall, look up. About 10 metres up is a frieze stretching the length of the room, with these words

…Fellow countrymen, see how kind trade can be, when there is no fraudulency in words, when promises are made to ones fellow men and not broken, when money is not given with usury…

Does Valencia’s ancient silk exchange have OUV (outstanding universal value, the all-encompassing criteria for inscription)? As my background is economics, I’m intrigued, so I am going to say yes. However, just across the street is the fabulous wrought-iron, domed Central Market. Inside this Modernist Mecca fresh food abounds; it is delightfully busy and colourful. And all around is Valencia’s pretty historic centre. An extension of the site is not on Spain’s tentative list, as far as I can tell. Perhaps it should be.