Another morning up bright and early at 0500. Very much worth it, to see the Valley of the Kings in solitude. Except for the guards at each grave, we have the place to ourselves.

Valley of the Kings at dawn 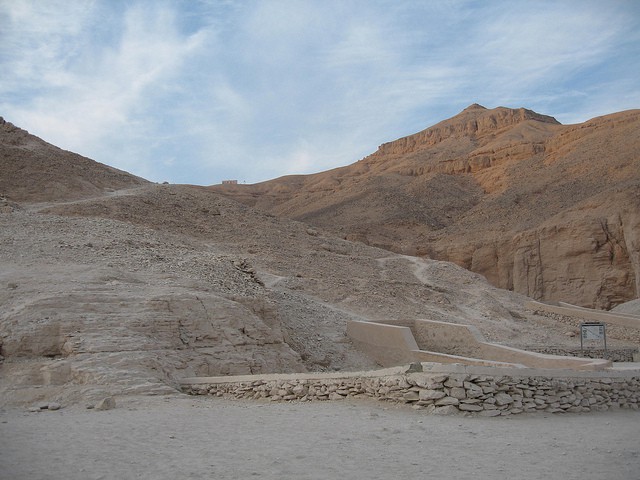 Valley of the Kings in the early morning.

The girls and I are all alone in the first tombs we visit. Exciting – and just a little eerie. The idea of the door shutting behind us, of being stuck for any length of time… frightening, thrilling.

Valley of the Kings is a remote, inhospitable limestone canyon in the desert. It probably looked much the same 3 000 years ago and in this silent dawn it’s easy to picture an ancient funeral party walking up the hill. Can’t say I feel particularly welcome – neither in my imaginary funeral party nor in this desolate valley on this 21st century morning.

The valley was likely chosen for that reason: an unwelcoming place, easy to guard and even seal off, thus discouraging grave robbers. It didn’t help much. Local families lived on top of graves for generations, dipping into the cellar now and again for a piece of gold to sell. 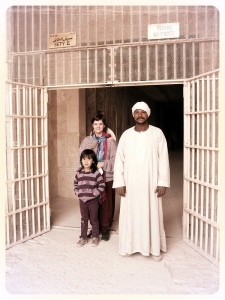 Is that so bad, really? A scientifically blasphemous thought, perhaps, and yet…: Priceless treasures, yes – particularly from an archaeological standpoint. But from a human point of view? The pharaohs obviously didn’t take their things along to the afterlife, so isn’t it just as well someone got some use out of them? There are still heaps left at the excellent Egyptian Museum in Cairo and at numerous museums around the world, often acquired through theft.

64 tombs in the Valley of the Kings are currently known, but only a small number are open to visitors. The basic entrance ticket includes three graves. We choose Ramses III, Thutmoses III and Seti II’s graves.

To see the richly decorated double-grave of Ramses V and Ramses VI – and Tutankhamun’s grave, we buy separate tickets. 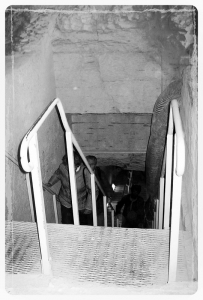 Can’t leave Luxor without seeing Tutankhamun’s grave. Especially now, as his mummy is recently returned to the grave. Cat ponders long and hard whether she wants to see this grave because of said mummy. A pretty scary thing, even though it’s just remains: mere bones, a container of sorts, left thousands of years ago. I tell her the mummy is not capable of moving as no one lives in it any more. It works. Kind of.

She knows she’ll be angry with herself if she backs out. That’s how she is. She also really wants to see the fabulous golden sarcophagus of the boy-king. An internal compromise then: she’ll descend the slightly spooky stairs, enter the tomb and look only to the right, where the sarcophagus is.

Of course, once there, curiosity wins. She simply must peek, ever so quickly, to the left, at the mummy. Turns out it isn’t quite as scary in real life. Only the head and feet are visible. The rest is covered by a sheet. 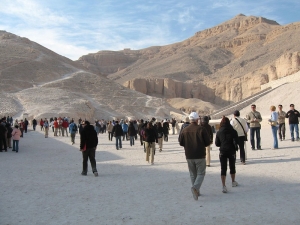 It is getting on towards 9 o’clock and becoming crowded. Much more difficult now, to try to visualise this barren valley 3 000 years ago. I’m pushed from every side by camera-wielding visitors and a large group of teenagers loudly proclaiming they’d rather be in bed. Might as well leave.

On to Hatshepsut’s death temple and some chilling recent history.

Valley of the Kings is part of the UNESCO World Heritage site Ancient Thebes with its Necropolis.