The last stop on this quick round of world heritage sites in the Netherlands, is Van Nellefabriek (the Van Nelle Factory) in Rotterdam. It’s a lovely day and I have all the time in the world, so walking the 3-4 km from Rotterdam Centraal railway station is just the thing. Also, there is a lot to see along the way. If the weather is bad, or you have limited time, or just not in the mood to walk, you have plenty of other options. Take a bus (no 38), tram (no 8, get off at the last stop), a taxi, or even better, rent a bicycle – it is the Netherlands, after all.

Located along the banks of a canal, Van Nellefabriek is visible from quite a distance. 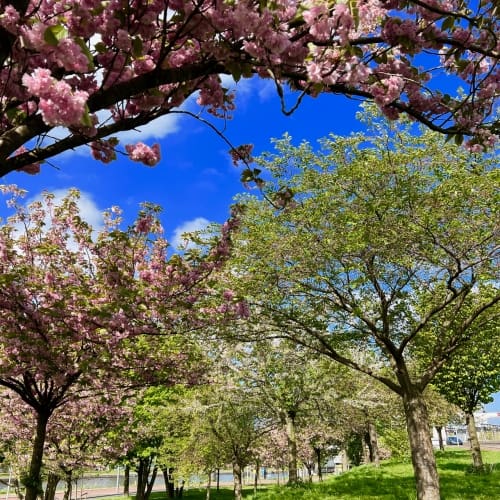 Just behind the trees here, across the canal… 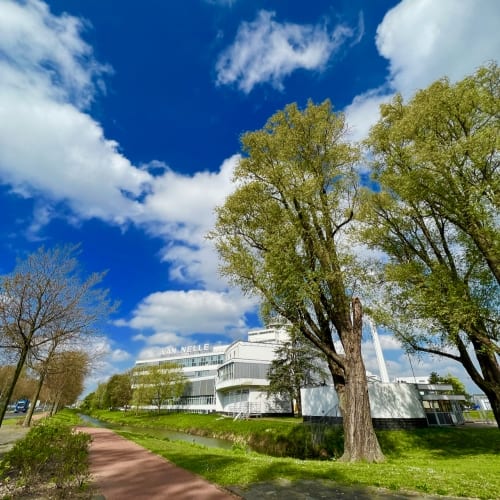 See the name ‘Van Nelle’ there? Practically merging with the clouds today. Clever advertising, discreet, yet still very visible. A major highway pass right beside. As do the railway. I see it clearly from the train going to the airport later in the day.

But what is this fabriek? What is it all about?

An icon of 20th century industrial architecture, that’s what. All steel and glass, a so-called curtain wall, designed to let natural light flow across the work floors. An ideal factory, open to the outside world, with space changing and evolving according to need.

The most beautiful factory in the world?

Pretty strong statement, isn’t it? It is not mine, rather it comes from CMMS Software Insight’s rating, where Van Nellefabriek tops the list of the world’s 25 most beautiful factories.

The complex is a fine example of post-World War I modern architecture. In the Netherlands, this style is known as Nieuwe Bouwen (meaning ‘new building’). It has much in common with the Bauhaus movement.

Designed with the welfare of the workers very much in mind, the buildings provided light – and lightness. Space and energy. The sanitary conditions in the factory were ahead of its time. The opportunity to take daily showers at work was an unprecedented luxury. Outside were sports fields and plenty of garden space for lunch breaks in the open air. 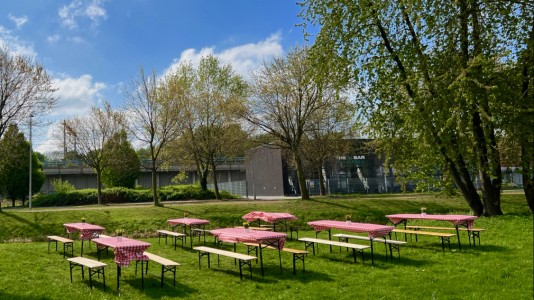 Common today, progressive in the 1920s.

Le Corbusier, one the most influential architects of the last century, had this to say after a visit to Van Nellefabriek in 1932:

In Rotterdam you find astonishing evidence of the way that life will be! Of a purity, so unconditionally pure! 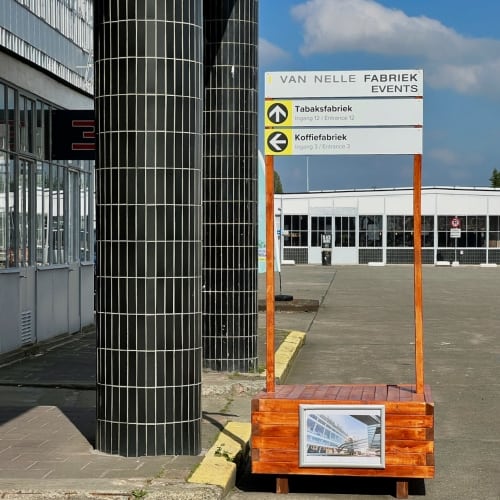 The site has three main buildings: the tea factory, the coffee factory and the tobacco factory, and several smaller buildings. Later, chewing gum was added to the menu. As well as rice and instant pudding.

Van Nellefabriek was in operation as a factory from the 1920s up until 1996. Today, it is the Van Nelle Design Factory, a creative co-working space for creative businesses. Befitting for an innovative, transformative building, I think.

An office with lots of light and energy, next to moving water, in a building worthy of special protection for the future: something to think about, eh?

But for now, we’ll settle for a little walkabout.

A poem in steel and glass 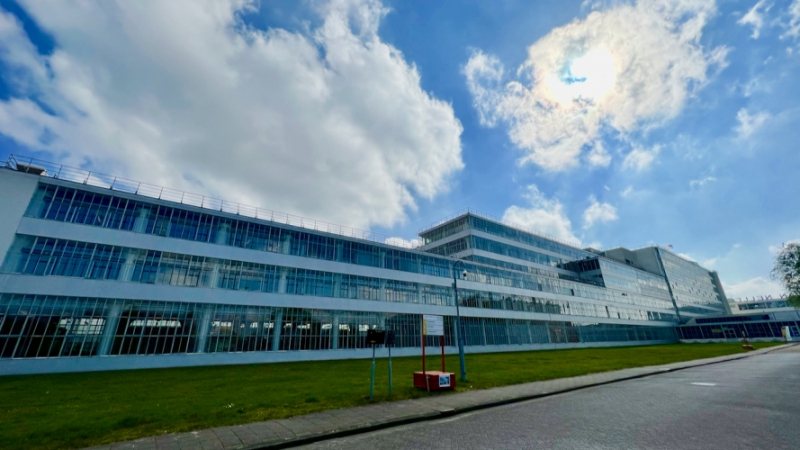 Le Corbusier was not the only architect awe-struck by this forward-looking Dutch factory. His contemporary, British architect Sir Howard Morley Robertson, called it a poem in steel and glass.

If you want to see the grounds and the factory from the outside, you will have no problems. There is a guard at the entrance, but he does not stop me, or even look at me. And why should he? Must be hundreds, if not thousands, of people walking or driving past him every day; on their way to work or to their meeting space for the day.

Inside the gates, I spot a large lawn – and this rather intriguing work of art: a woman’s legs, in high heels, unattached to a body. What is the story here? 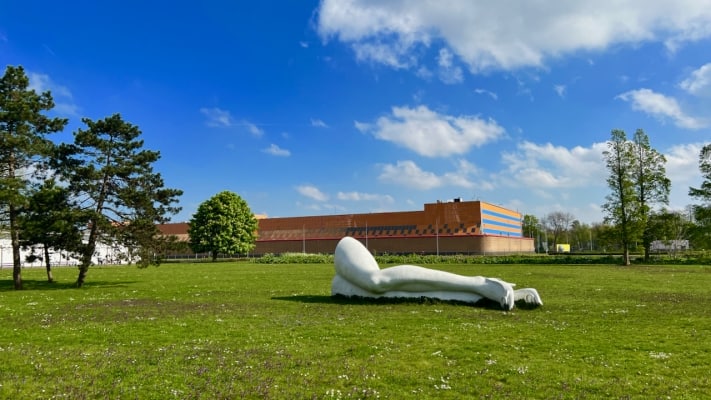 I google. Nothing. Hm… surely, someone must have snapped a photo of this rather striking sculpture? I try reverse image search. Still nothing. If you know anything about this work of art, or the artist, I would love to hear from you. Get in touch here.

OK, onwards to the main player:

Wandering around the outside of the large factory, I have to agree with Robertson: poetry in steel and glass, indeed.

Four slanted walkways, transport bridges, connect the factory and the warehouse. I am brought back to Amsterdam airport yesterday. Waiting to deplane, I was looking at a very similar structure through my window in seat 19F. 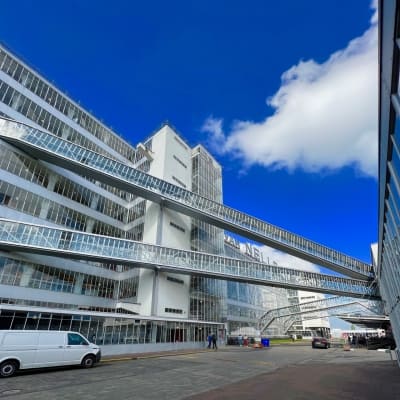 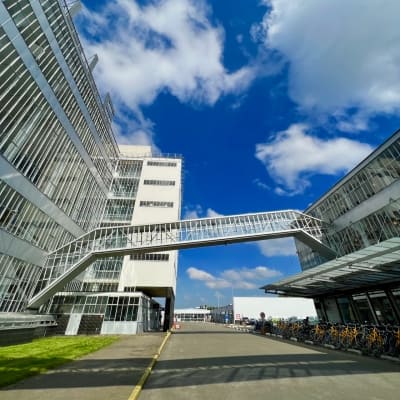 The sky bridges look like the gangway between a plane and the airport, don’t they?

If you want to know more about the history and culture of a factory 100 years ago, the inside is important. However, if your main interest is architecture, the outside is the most remarkable, as there is not much left of the inside as it once was. No smell of coffee, tea or tobacco. (Bit sad, that. Coffee smells delicious; better than it tastes, I’ve always thought.) There are signs pointing to the various areas, and a bit of old machinery, but otherwise the inside is fairly empty.

In the old days, women and men worked on separate floors and had separate staircases, to avoid the mostly young girls being harassed. Thankfully, we have progressed on that count. For the most part. 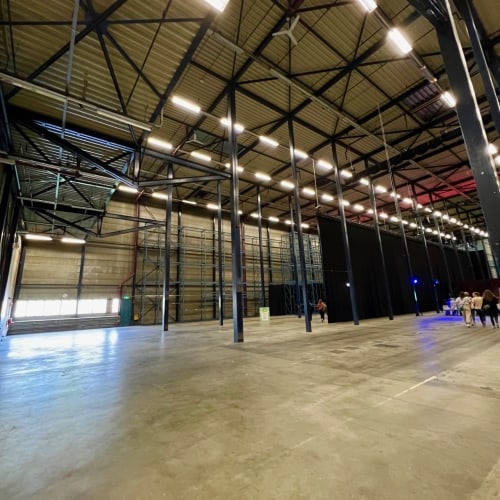 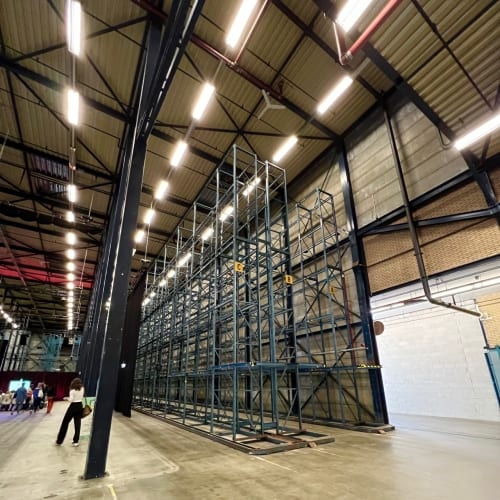 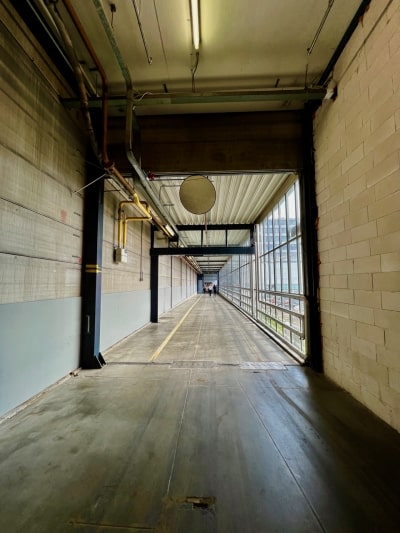 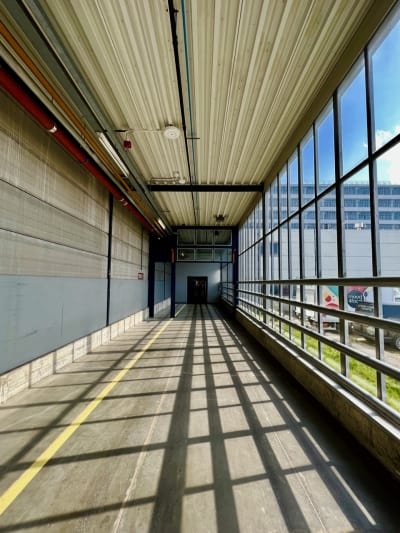 From the inside looking out

The view from the inside looking out, is much the same as from the outside looking in. Yet, it feels a bit different. I imagine being a factory worker in the 1930s, say – looking out, longing for break time. For having tea outside on a lovely sunny day like today. To get home to dinner with the family.

How to see the inside of the Van Nellefabriek

Now, this is someone’s workplace, remember. You can’t just waltz in. If you want a proper look inside the Van Nellefabriek, you have a few options: either visit on one of two annual days when it is open to the public: the National Architecture Day (last weekend of June), and the Open Monuments Day (second weekend of September). You can also take a tour at a weekend (there is one tour on Saturday and one on Sunday), or hire a private guide. Which is what I would have done, had I planned better.

But… hang on! Didn’t you just show us images from the inside? (Yes, I can read your thoughts). How…?

Well, whilst here, you see, signs advertising ‘into the wild’ were so enticing. That – and a wide open door. I simply could not help myself, so I snuck in, sort of piggybacking on participants of a congress. Thank you to Lovah (an organisation for GPs in training, I learned) for unwittingly providing me with an invitation to have a peek inside the former factory. I promise I was very unobtrusive. 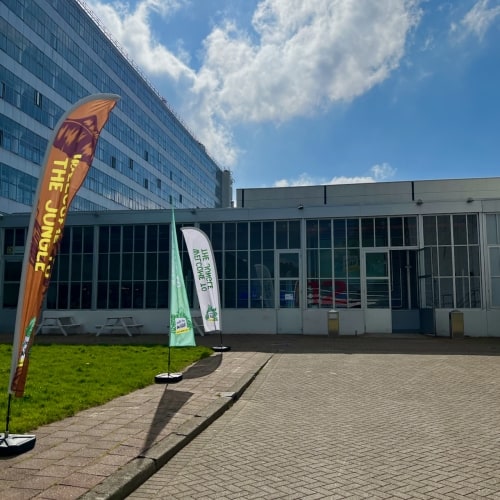 There are about 400 events taking place in Van Nellefabriek each year – so the chances of not bumping into one, is probably close to nil. I won’t say don’t do it, cause you know, I have kids (and also distinctly remember being one), so I know the ‘do as I say, not as I do’-strategy is doomed to failure. But if you are going to try the Sophie Ad-lib Approach here, make sure you are unobtrusive about it, too.

Back out in the sunshine, I am appreciating how from the outside, the factory look just the same as it did in the beginning.

Before leaving the Van Nellefabriek, I stop for a final look at the amputated legs. Weirdly magnetic. 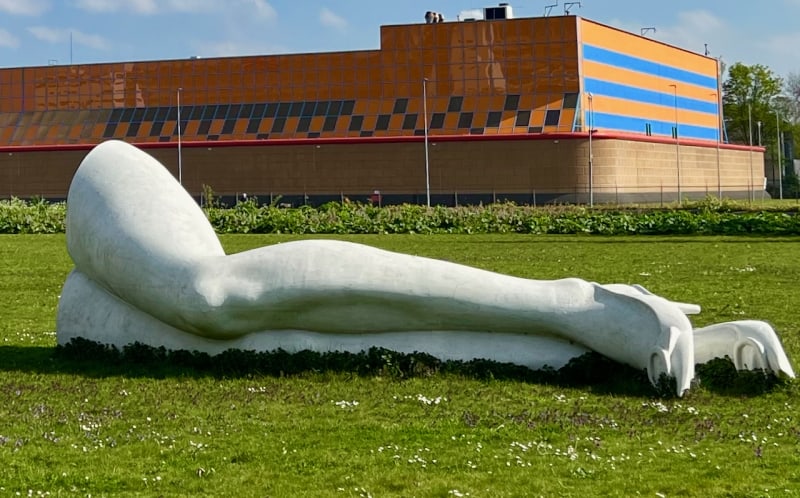 I wave goodbye to the guard at the gate. Don’t think he notices. 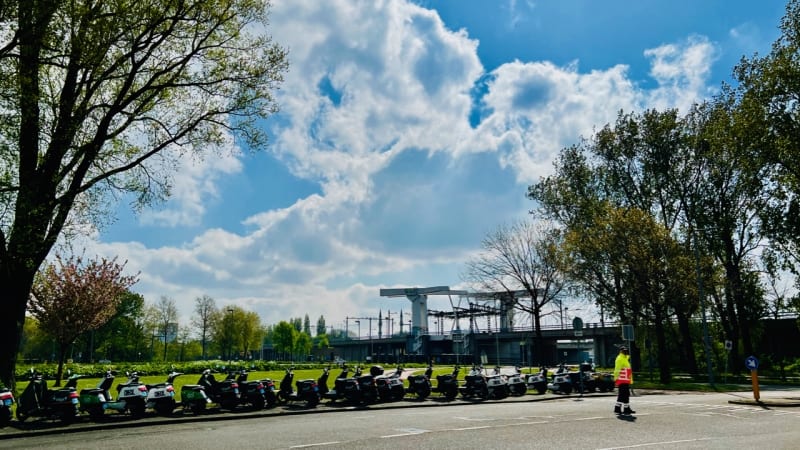 Leaving the Van Nellefabriek: view from the gate

Heading back to Rotterdam Centraal Station, I take another route. Lots to see here as well, including the Mathenessebrug, a drawbridge, where I find myself on the wrong side of the barrier as the bridge opens to let boats pass. I slide underneath – or stumble is perhaps a more apt description – just in time. Cue eye-rolling looks from Hollanders on bikes and me trying to look suitably reproached. If you’re not used to bridges opening and closing, it is an interesting experience, so here you go.