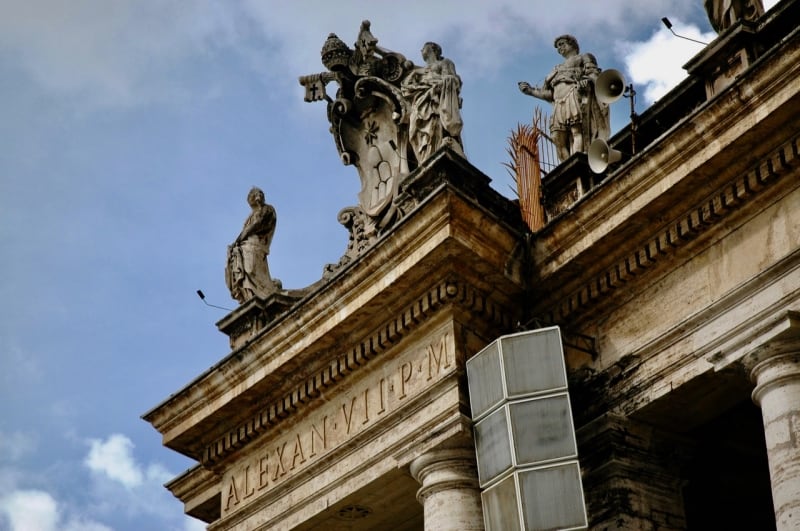 And the big? The Vatican is HQ of a religion that has wielded a massive influence through nearly 2,000 years, on the lives of very many people in the world – 1.3 billion! Politically, economically, emotionally, bodily. Waning influence, as is true for religion in general – but still big.

I am sure we all have opinions on that, strong and firm opinions, even. But we will leave that for another time, and instead appreciate the architecture – and perhaps a quirky story or two.

In fact, let us begin with a story:

It is an odd construction, the Vatican. Not only is it the smallest country in the world (about 1/2 km2), it is also located in the middle of a city. Ca 825 people live in Vatican City; the Pope and his entourage. But why is it a country? You – or rather, the Catholic church – can thank none other than Benito Mussolini for that. 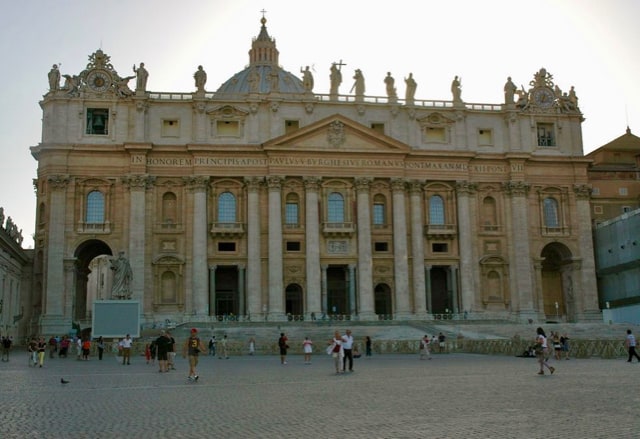 Back in the 8th century King Pepin II gave the pope at the time (Stephen II) protection and a bit of land surrounding Rome, and so the first papal state was established. Next, another pope (Leo III) crowned Pepin’s son, Emperor of Rome. That son was Charlemagne, founder of the Roman Empire v2.0, better known as the Holy Roman Empire. Not exactly separation of church and state in those days, was it? That bond lasted for 1,000 years (some will say it still does).

Onwards a millennium and then some, and we have the risorgimento – the unification of Italy in the 1860s – that I mention in this post. Then pope Pius IX didn’t accept this new-fangled country – or at least not that Rome and the Vatican should be a part of it. A usurper state, he called it. He declared himself ‘Prisoner of the Vatican’, locked himself inside the complex and refused to come out. This dispute lasted for nearly 60 years, until Benito Mussolini came to power. He made a deal with the pope (we’ve now come to Pius XI). In 1929, Mussolini, King Vittorio Emanuele III of Italy, and Pius signed the Pacta Lateranensia, a treaty granting independence to the Vatican.

Moving on to architecture, let’s look at St Peter’s Square through the years. The digital years, that is. My digital years. Piazza di San Pietro through those years. 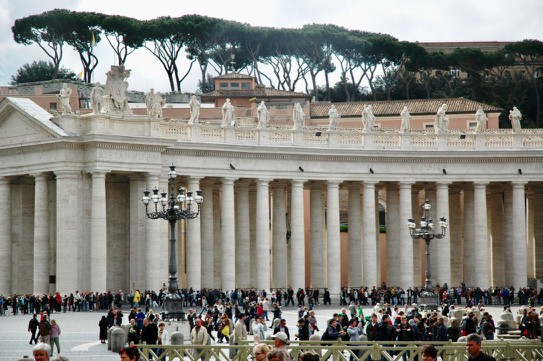 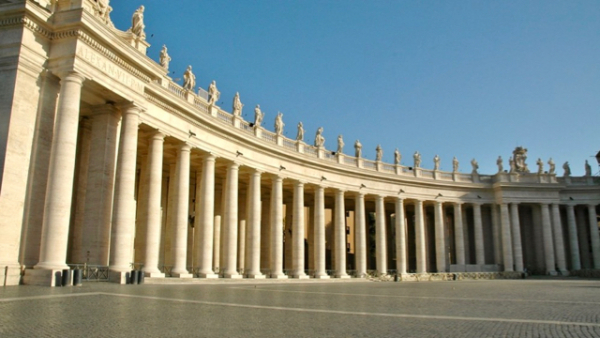 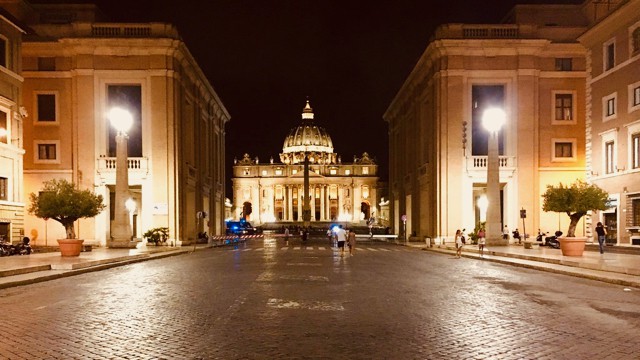 Some years ago, I had an office on the 7th floor in a building across the street from Oslo’s National Theatre, on level with the theatre roof. Whenever I looked out through my windows, I saw two massive stone lions. For all the years I have been, worked, and lived in Oslo, I never even knew they were there.

It is so easy to look straight ahead, isn’t it? We do that almost by default. Or we look down, to see where we are going – or at our phones. Always busy, busy, busy (or possibly to avoid having to talk to people – this is Northern Europe, after all). But rarely do we look up, without being reminded to, one way or another.

When you look up in St Peter’s Square, you will spot 13 enormous statues on top of the basilica: Jesus carrying a cross, surrounded by John the Baptist and 11 apostles.

On top of the colonnades are another 140 statues – various saint, martyrs, virgins, combined virgin & martyr, widows, evangelists, queens, popes, bishops, even the odd hermit and the occasional husband. You can see a comprehensive list of the 140 here.

Notice the obelisk in the background there? 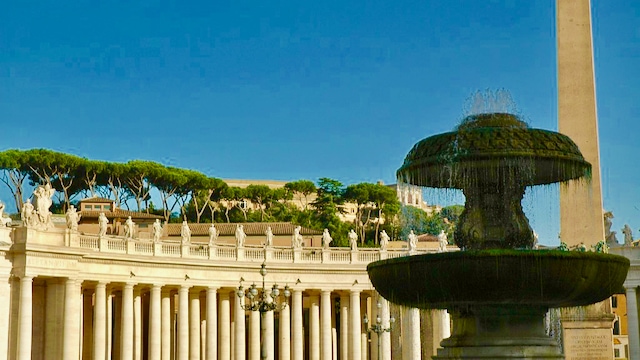 Caligula brought that obelisk back from Alexandria. Now, as we know, Caligula was not a nice guy. He did not get along with the senators much – or anyone, really. People just didn’t revere him enough, he thought. So one day, he announced that he was moving to Alexandria, and he would take his imperial power with him. The good people of Alex, he reckoned, would worship him as the god that he was. The philosopher Philo of Alexandria, describes him as

the first emperor who was admired by everyone in all the world, from the rising to the setting sun

Back in Rome, the senators balked. No way, they said. We have put up with debauchery, repression, tyranny, executing people left, right and centre. But this! This will not do. Rome cannot lose its power. Caligula must go. And so the Praetorian Guard set to work yet again. Stabbed him 30 times, cause that’s the way one got rid of emperors in those days, apparently.

Underneath Basilica di San Pietro is a large necropolis (open to visitors). Amongst all those graves, is the one of San Pietro himself. Legend has it that this first bishop of Rome, chief apostle, and essentially Jesus’ main man (even though he denied knowing him three times before sunrise), is buried underneath the high altar.

In July of 64, Rome suffered a great fire, destroying nearly two-thirds of the city and leading to economic devastation. Nero blamed the Christians, and executed many of them. Some by fire, some by wild beasts, some by crucifixion. Upside-down crucifixion for Pete. Apparently, he asked for it. Feeling guilty about all those denials, presumably. 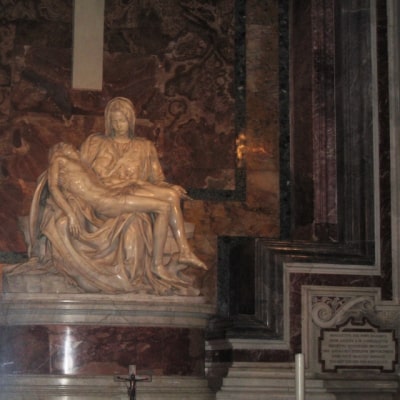 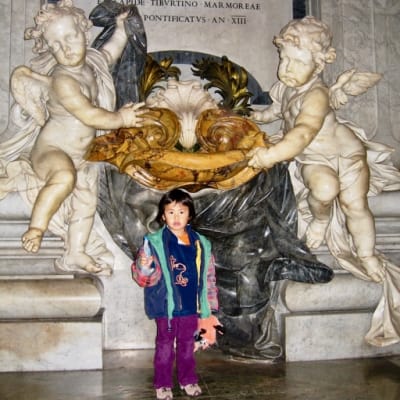 Inside the largest religious building in the world, a grandiose and decadent Renaissance church, I focus on La Pietà.

Q: What does Oslo Opera House and La Pietà have in common?

A: They are are both made of Carrara marble.

410 years apart, one was created by talented architectural firm Snøhetta in 2008, the other by talented sculptor Michelangelo Buonarroti in 1498. The sculpture of Jesus dying in his mother’s arms is beautiful – in a melancholic, ethereal way. As is the stunning ceiling in the Sistine Chapel. Both are amongst Michelangelo’s most famous works. Along with David. (Also beautiful – though in a more earthly way.)

There is a strictly enforced no-photos rule in the Sistine chapel. Photos are allowed in St Peter’s basilica. Except, as I found out through admonition, you cannot take photos of people in the basilica, including yourself. No selfies, no photos of your children.

But… hang on! Is that not a living, breathing child I see?

Yes. Yes, it is. No photos with people in them, said the guard. After I pressed the shutter. He did not ask me to delete. And I think Cat adds to the scene, so I am keeping it.