I seem to be having a thing for glaciers lately and can’t help but sharing it with you good folks. Luckily, I live in a part of the world where they abound; not only in Norway but in some of our neighbour countries as well.

In this post about walking inside Langjökull glacier, I briefly refer to Vatnajökull, Iceland‘s largest, and Europe’s second largest ice cap. Eager to use up soon-to-expire Eurobonus points (SAS’ version of air miles), I surf around for a brief escape from the somewhat oppressive Scandinavian summer heat (yes, you read that right). And whaddyaknow, I soon spot the frozen white giant on UNESCO’s list of new world heritage sites. The signs are clear, aren’t they? Get thee to Vatnajökull, says the universe. And who am I to squabble with the cosmos. You’ll join me, of course. Let’s do what my Viking ancestors did and go west.

Time is of no consequence

I’m particularly intrigued by this sentence in UNESCO’s inscription:

Most of the property’s bedrock is basaltic, the oldest being erupted some 10 million years ago and the most recent in 2015.

10 million years ago, 4 years ago, side by side. Again, I’m reminded how inconsequential time is.

Back in the land of time (or at least, where we must at least pretend time exists), we have only one day to play with. Vatnajökull covers a whopping 8 300 km2! Some heavy-duty prioritising is in order. But where to even begin in this vast, frozen desert?

Glaciers! They’re a given. Boating around on a glacial lagoon, all James Bond like, now that would be a bonus. Let’s also get up close to a waterfall or two; they’re my favourite feature of nature and Iceland has some beauts. And Reynisfjara, that should be on the itinerary as well: that intimidating beach where every year, someone is dragged out to sea on account on them disrespecting the force of the North Atlantic. Bad idea!

A bit more research, and Jökulsárlón lagoon and Svinafellsjökull Glacier pop up as good options. We’ll begin with Jökulsárlón, the spectacular lagoon in the top photo here.

Vatnajökull comprises no less than ten volcanoes; eight of them are topped by glaciers. The glaciers here (as well as everywhere else) are sadly retreating, and all that melted ice creates lakes. Jökulsárlón is the large, ever-growing glacial lagoon at the edge of Vatnajökull National Park, quadrupled in size since the 1970s.

Some of these icebergs are 20 – 30 metres high. My mind can’t help but skip a century back in time. Yours too, perhaps? To a fateful April night in 1912, 700 nautical miles east of Nova Scotia. Luckily, the icebergs in Jökulsárlón are easy to see – and avoid – in daylight in a small boat operating at sensible speed. 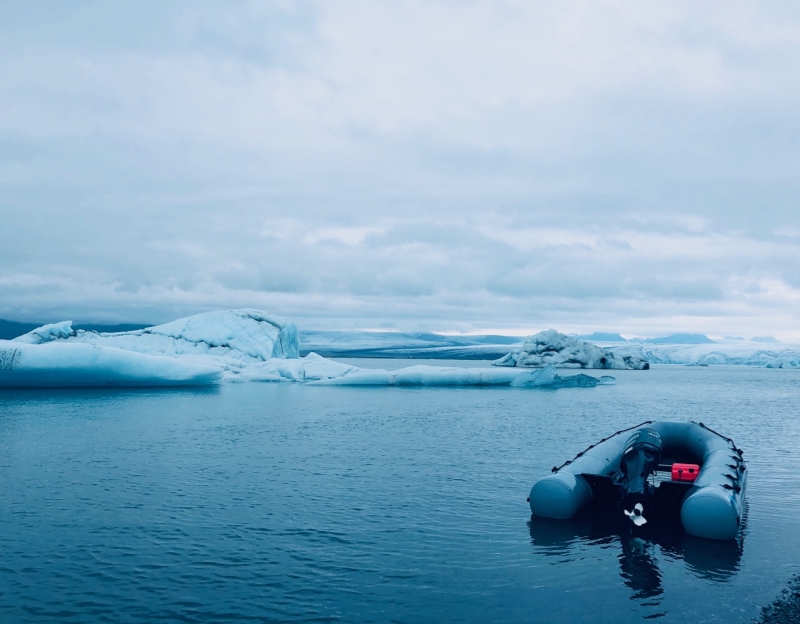 If these glacial scenes look familiar, you may have spotted them in Tomb Raider. Or perhaps you’ve seen James Bond traipse around here in A View to a Kill and Die Another Day. Batman’s been here, too. Can you blame the Hollywood producers? More recently, Amazing Race was filmed here.

Keen to be on the water as much as possible, I join an amphibious craft. We skirt the icebergs, intriguingly close, while Ben cuts up millennia-old ice in pieces for me to try. Thanks, I’m good with just looking, and briefly touching the freezing bits. 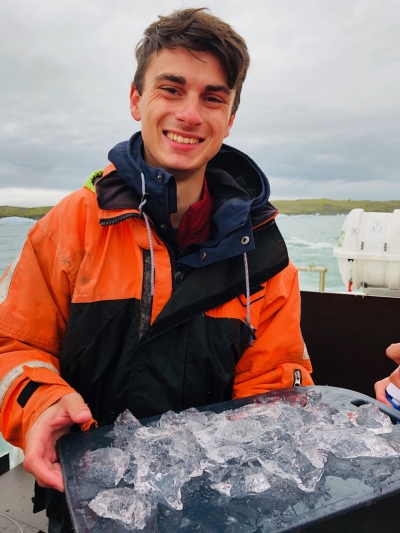 The only thing free in Iceland: this 1000-year-old ice. And Ben’s smile.

Just next to Jökulsárlón, is Diamond Beach. Why diamond? If you look closely at the black volcanic sand, you’ll soon see why. Icebergs have been washed ashore on this glacial plain, leaving glistening little jewels in their wake. If you hang around, you’ll see seals, too. And orcas gliding gracefully past. 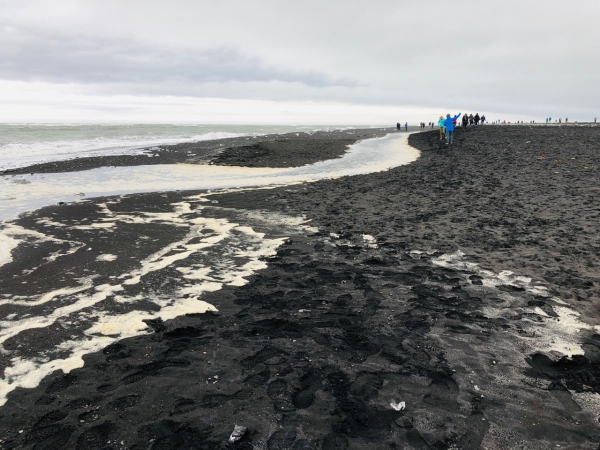 A catastrophe in the making?

In the southernmost part of Vatnajökull National Park, Svinafellsjökull Glacier could collapse any time as a result of fractures in the bordering mountain. The fractures are caused by the retreating/shrinking glacier as this removes support for the rock. Glacial shrinking, in turn, is caused by global warming. #chainreaction 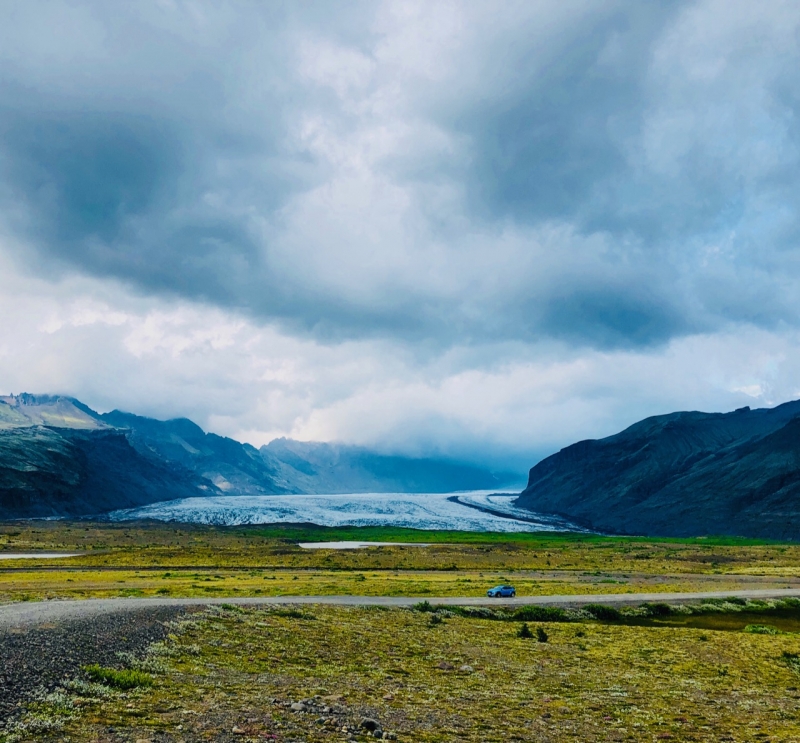 Along the road is this intriguing rock, just sort of standing there. Skaftárhreppur is part of Katla UNESCO Global Geopark as well as Vatnajökull National Park. Fascinating geology and landscape everywhere you turn.

OK, so we’re at Reynisfjara. Notice the similarity to Giant’s Causeway a bit further west, in Ireland. It’s the same type of basalt columns, formed as a result of volcanic eruption. As far as I know, no giants ever challenged each other here at Reynisfjara. But that doesn’t mean there isn’t folklore. Galore. 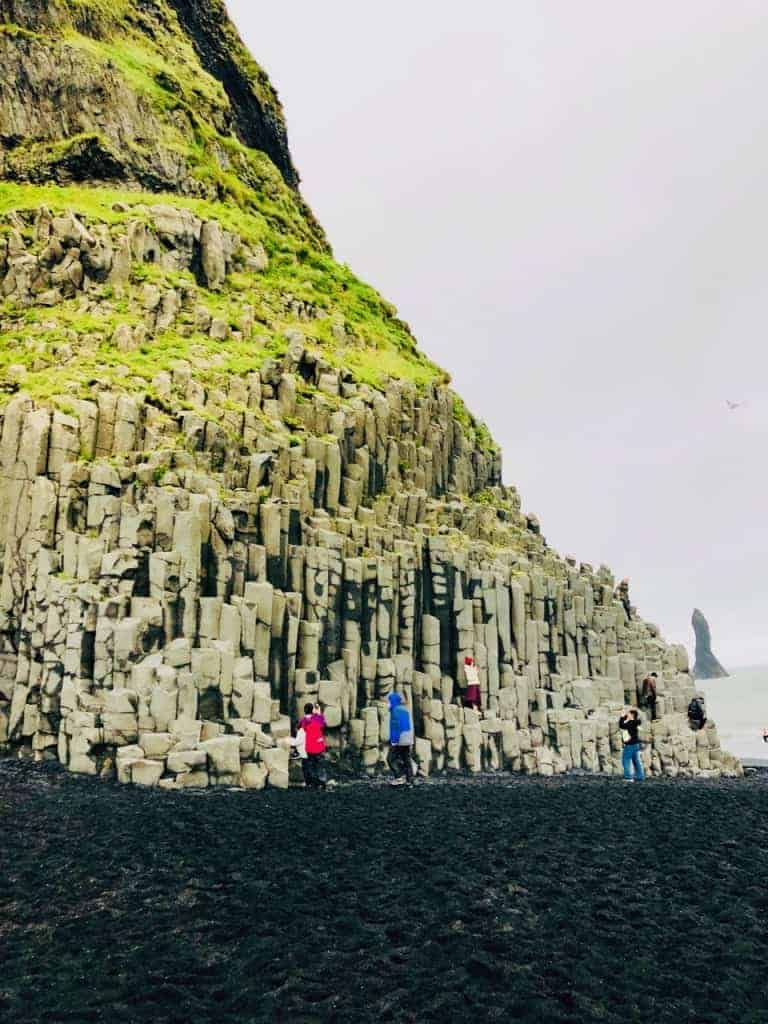 Spot the rocky, phallic stack out at sea there? That’s Reynisdrangar, rather impressive rock formations, some of which feature in Game of Thrones (season 7, at Eastwatch-by-the-Sea, for you aficionados). Now, these large basalt columns used to be trolls trying to pull ships from the ocean to shore. Not too smart, these trolls; they went late at night; and as dawn broke, they looked into the rising sun, and was turned into stone.  A bit like Lot’s wife.

Got a bird-watcher within? This landscape is home to numerous sea birds, most notably puffins and guillemots. Bring your binoculars, but don’t climb the basalt! That’s just one of many things you mustn’t do here at Reynisfjara beach. Not that people listen. 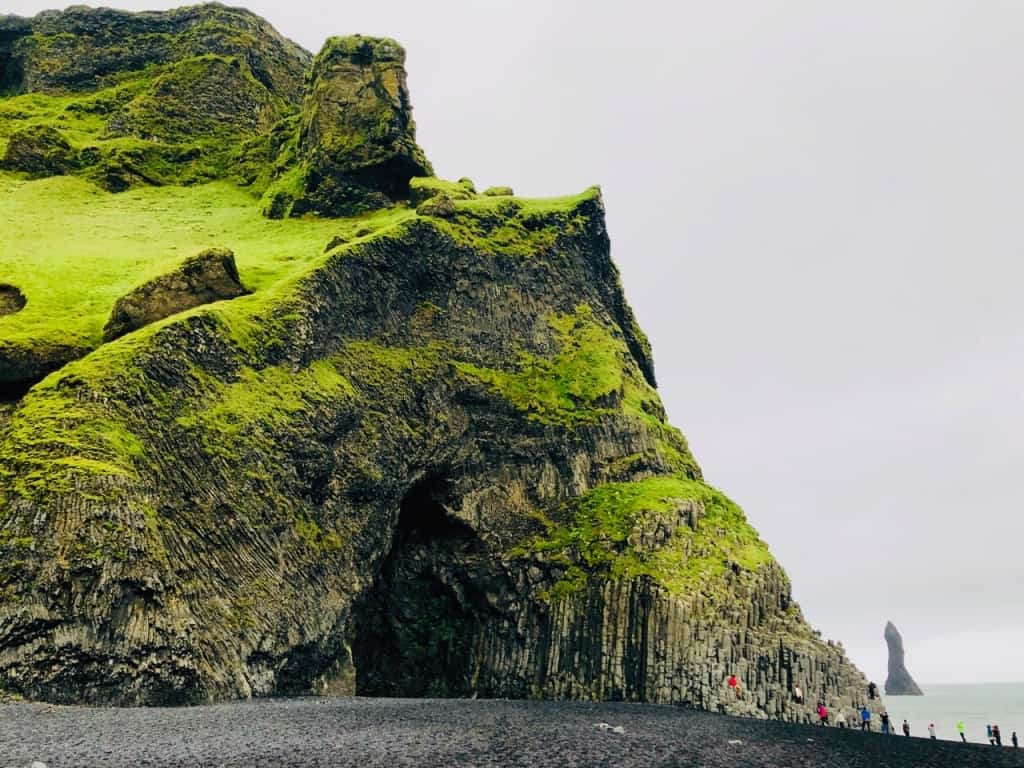 Remember I mentioned a scary beach? Reynisfjara is not to be messed with. Yet, inevitably, people drown, not heeding advice. They go too far out, not knowing when the unpredictable waves come in to wash over you and drag you out into the ice-cold Norwegian Sea. Looks peaceful here, doesn’t it? Don’t be fooled. Sneaker waves will snatch you in a split second and suck you out with the undertow. Don’t turn your back to the sea here, folks – no selfie is worth it. And remember those words: sneaker waves!

The large opening you see is Hálsanefshellir cave, another danger spot. Don’t think you can escape the force of nature by popping in here. In 2013, 100 tonnes of basalt columns collapsed in the cave. Yet, people actually camp in here. I’m tempted to say Darwin Awards. I guess I just said it.

Danger lurks everywhere here, so don’t swim, don’t kick around the sand close to the sea, and watch out for rock avalanches; all in all, this is one place you don’t want to mess with. And there’s no excuse for being stupid; there are warning signs everywhere. Look at that ominous cross down in the right-hand corner there, accounting recent tourist deaths. 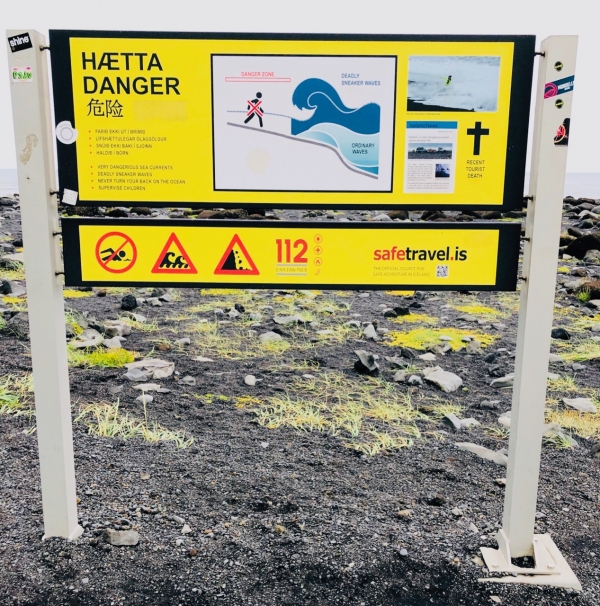 As day fades into the mellow Nordic night, it’s time for water falls. And we’ve found two stunning ones, Skógafoss and Seljalandsfoss. The two are about a half-hour drive apart. Both cascade 60 metres down.

At 25 metres, Skógafoss is the wider one. We’re going really close and we’re even racing up the 527 steep stairs to the top, past nesting seabirds. Can you see us on the little viewing platform there? 25 metres of water means a lot of spray, which often means rainbows!

The chest in Þrasi’s secret lair

Under the Skógar waterfall

Rewards the one who ventures there

With endless riches, great and small

Endless riches, great and small? What’s the story, yo? I’m glad you asked. And here you go:

Þrasi Þórólfsson’s was a Viking settler – and giant, who hid a chest filled with gold behind the cascade. For a long time, one end of this chest was visible through the waterfall. Oh, what a temptation that must have been! Three locals tried to retrieve it, by placing a hook through an iron ring at the side of the chest. Pulling hard on the ring, all they managed was to pull the ring loose. Goodbye treasure. Greed will get you nowhere, they must have thought after their failed attempt. Better give the ring to the church. And so they did.

You and I can see the ring in Skógasafn museum in the nearby village of Skógar. 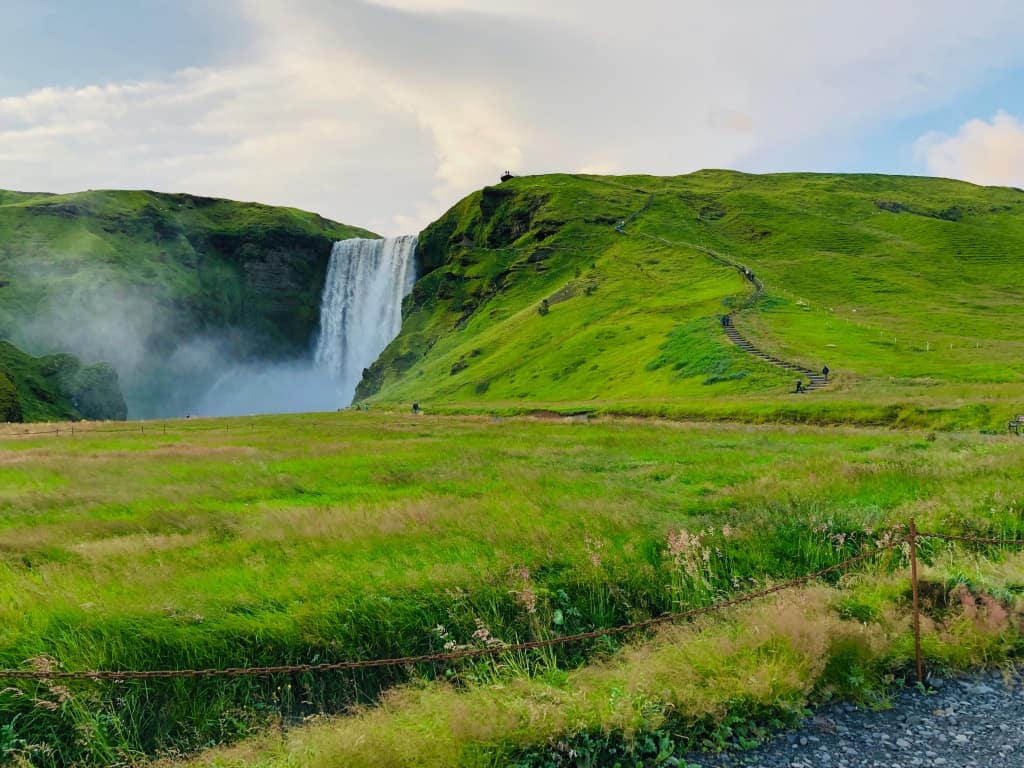 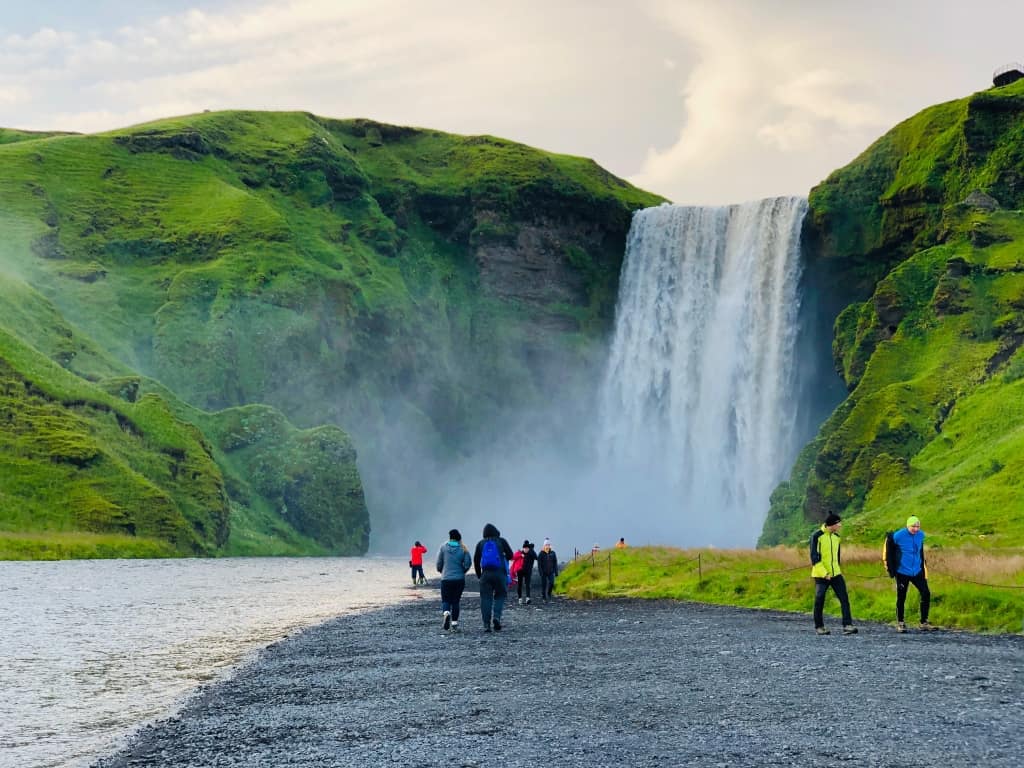 Also nearby is Fimmvörðuháls Pass, Iceland’s most famous hiking trail, 22 kilometres long along Skógá river, between Mýrdalsjökull and Eyjafjallajökull, and ending in Þórsmörk Valley. Stark, stunning nature and more waterfalls all along here.

BE SAFE: Fimmvörðuháls means Five-milestone-ridge, and you will be crossing a ridge. Only hike between mid-May and mid-September. Weather can be unpredictable here, and the trails can be difficult and confusing. Such is nature! People have died crossing the ridge. If you go this route on your own, be sure to check the weather forecast and make your travel plans known. (Record on www.safetravel.is/travel-plan).

My favourite Icelandic waterfall is Seljalandsfoss. 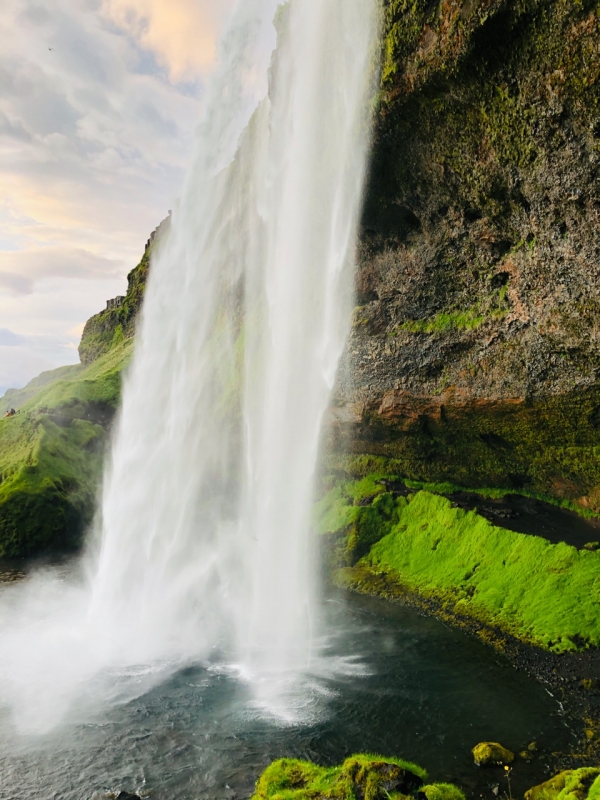 You may remember the name Eyjafjallajökull, the little volcano that disrupted air traffic world-wide some 10 years ago; the volcano that had its own Facebook page. (I see it has at least two Facebook pages, actually, both with 24000+ fans. We could learn a thing or two from this fiery baby.)

Well, Eyafjallajökull is the starting point of the river that feeds Seljalandsfoss. Interesting as that is, what’s really special about this waterfall is that you can walk behind it. 360° views. It’s not the only one, of course; I can walk behind waterfalls here in the homeland, as well. But this is the most spectacular I’ve seen. Seljalandsfoss radiates power and beauty, from every angle. 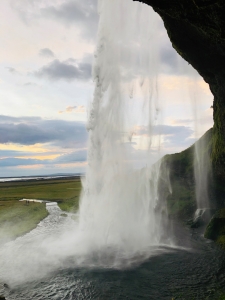 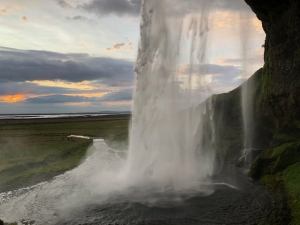 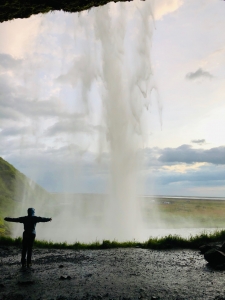 Waterproofs are a good idea here, you WILL get wet. (I had none, and I was half drenched. Worth every drop.)

General landscape along the road 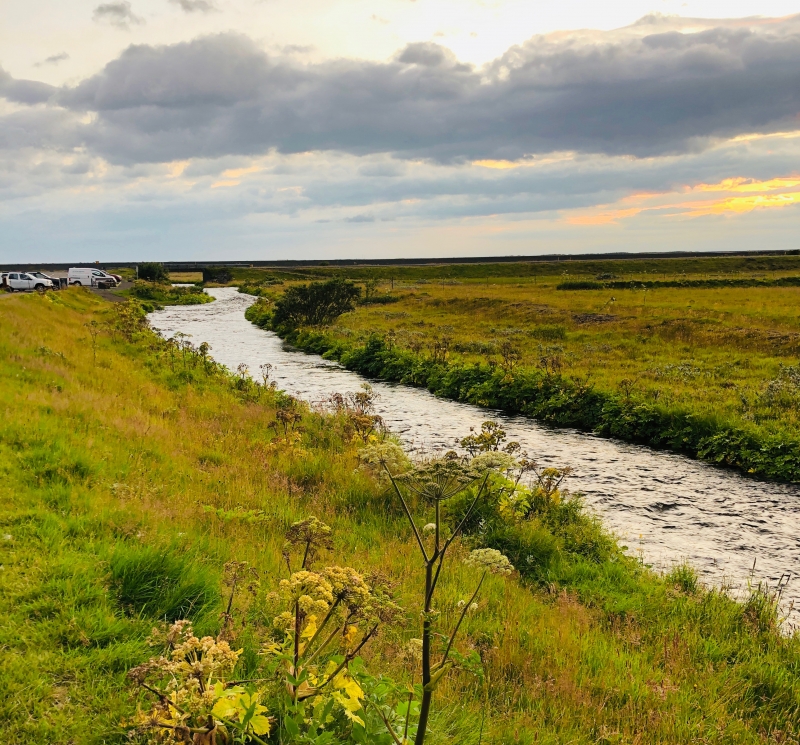 Did you enjoy our little jaunt in Vatnajökull National Park?

I’m thinking a glacier hike next time. Want to come along?

Vatnajökull National Park – Dynamic Nature of Fire and Ice was added to the World Heritage list in July 2019. Here are more UNESCO World Heritage sites around the world.