Strange, isn’t it, how when you’re about to do one thing, random thoughts or happenings take you somewhere else entirely? I was about to write another post about quarantine cuisine (Arabic this time), when I began thinking about the word quarantine. And then I heard December 1963 by the Four Seasons playing through a neighbour’s open door. So instead of food, this post has morphed into a little photo essay on Venice. And more random thoughts. 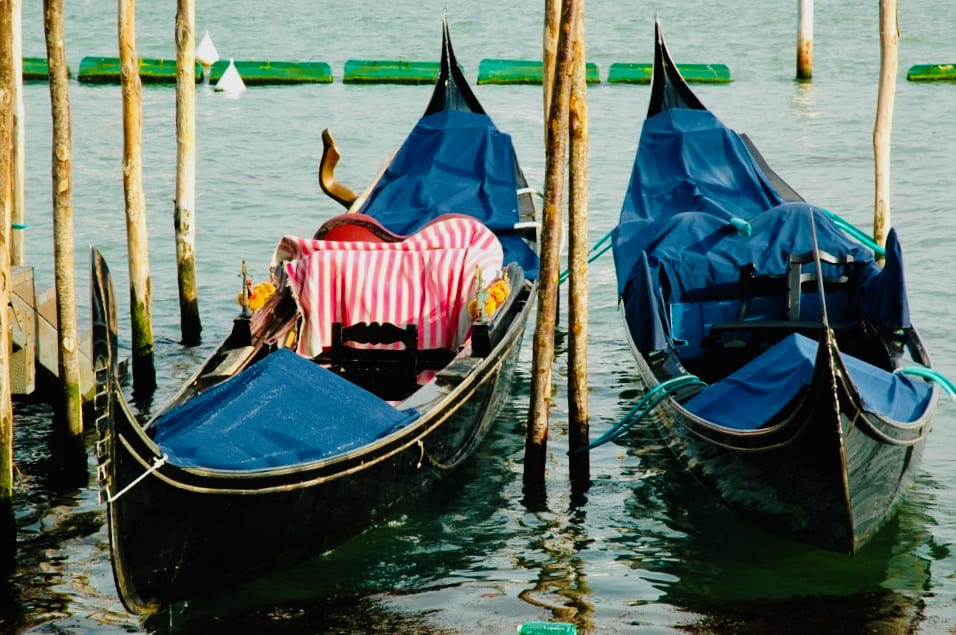 And what does quarantine and a 1970s hit have to do with Venice? Hang on, all will become clear.

So, you’re quarantined. Have you wondered what that means? Other than being a nuisance? I have. This blog is about curiosity, after all.

I had a couple of Italian courses at uni. Through lack of use, the linguistic skills I once acquired in the language of love (cause, let’s face it, French is too snobby), have become decidedly sketchy. It has been decades, after all. But I do remember how to count. 40 = quaranta. I’m guessing quarantine could mean being locked up for 40… something. Days? Weeks?

Search to the rescue. I look up quarantine and isolation, and as expected, I find plenty of historical cases. The Bible talks about isolating infected people from the rest of the population, but for 7 days. The Quran also talks about isolation for lepers, without specifying a time frame. No quaranta yet.

Let’s hop on over to the mid-14th century, when the Bubonic plague ravaged Europe and Asia, killing as much as 60% of the population of Europe. 60% of 80 million! Possibly. Numbers vary. A lot. Either way, we can all agree it was no laughing matter.

The Republic of Venice led the way back then, in taking steps to control the spread of the virus. They appointed guardians of public health, and established a colony for the infected on Lazzaretto Vecchio, one of the 118 islands in the Venetian Lagoon. In Ragusa (present-day Dubrovnik, then Venetian), all ships were required to anchor outside for 30 days – a trentine – while authorities inspected crew and cargo for contagion. Pretty advanced medical thinking in the 1300s.

Just now, here in Norway, anyone entering from another country will be quarantined for 14 days. There’s a high degree of trust involved. ‘We trust that you do as you’re advised, and quarantine yourselves,’ the government says. And the large majority takes heed. Not so in medieval Venice. There you had to spend a trentine on that isolated island waiting out possible symptoms of the plague. The waiting period was later extended to 40 days. A quarantine.

The 40 days worked. Turns out the Bubonic plague had a 37-day incubation period, from infection to death. If, after 40 days, you weren’t dead, you were in the clear. 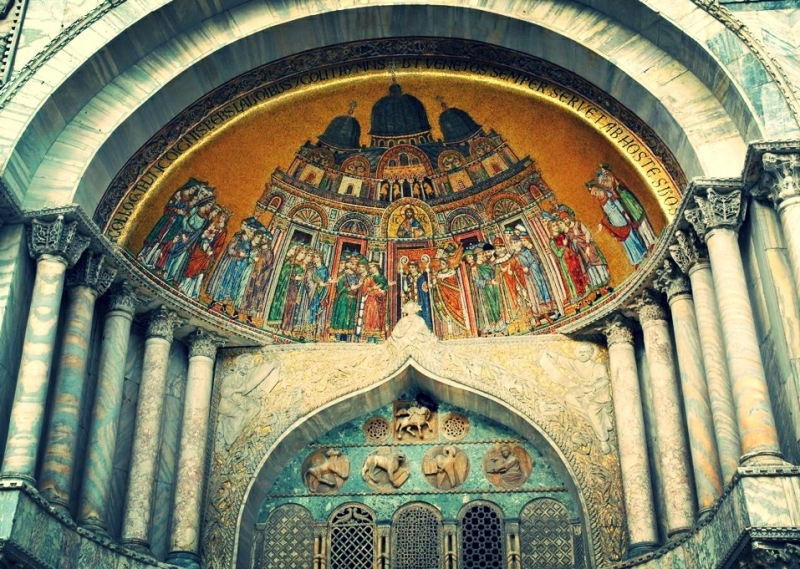 Oh, what a night!

My first memory of Venice is dancing. I was 15, and on my first holiday abroad without parents. We were a group of Norwegian kids at summer school in Austria, there to improve our German (ostensibly). A weekend in Venice was part of the deal. Exciting stuff.

Decades later, I have a few days between two meetings, one in Rome and one in Carinthia. Venice is my in-between of choice. Getting off the train at Santa Lucia Station, I’m immediately on the Canal Grande, hopping into a vaporetto (public water bus).

It’s like seeing Venice for the first time! Do I remember so little? Well, at least, I remember my fellow travellers, dancing and drinking. (There was probably a legal drinking age even then. But it wasn’t enforced. At all.) That summer night, someone with a boom box was playing December 1963 – just like my neighbour is doing now – and we turned the wharf into our very own teen disco. Oh, what a night! 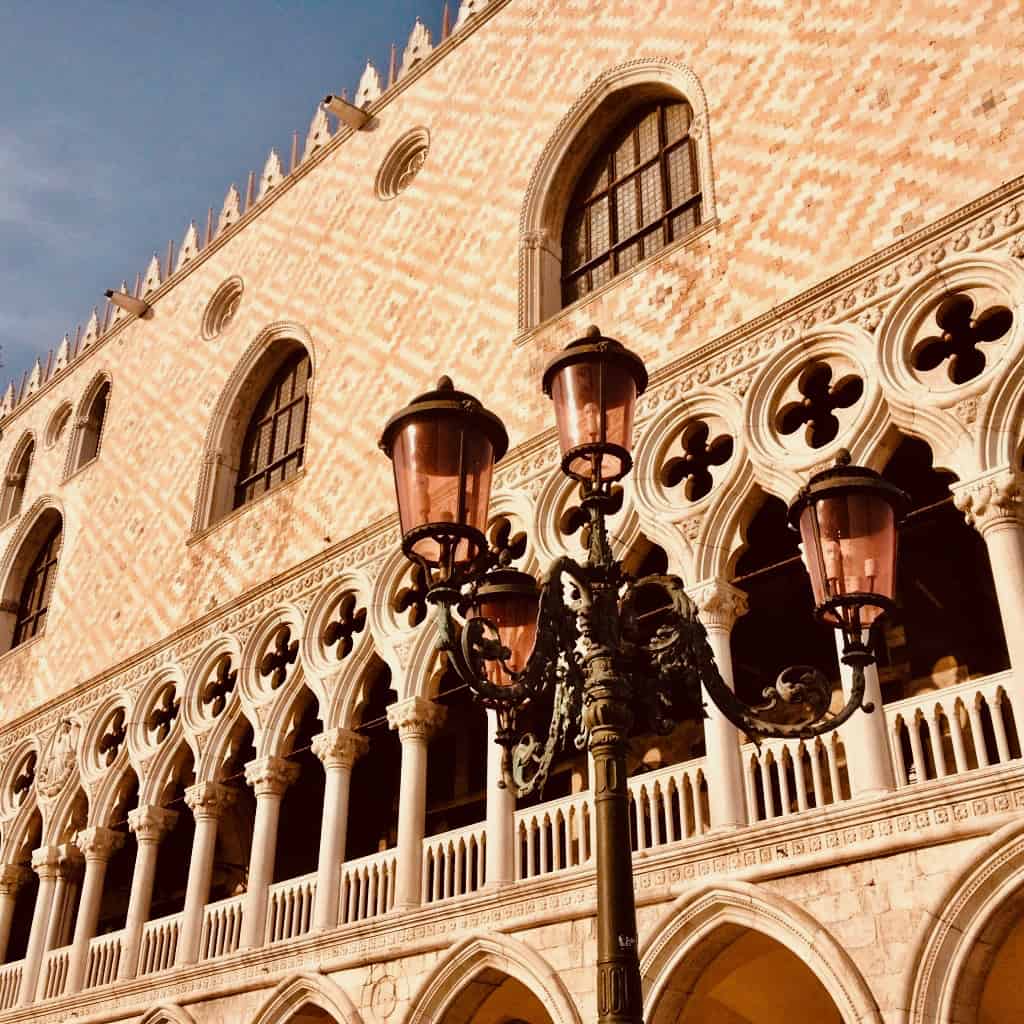 Back in this millennium, I’m sitting down with my notebook and a (very expensive) lemonade at Piazza San Marco, looking up at the Campanile. Suddenly, other memories come back, too. Of the tower, of the doge’s palace. Of the square and the city.

Phew! 15-year-old me wasn’t only about boys and booze and boogie, after all. There are also memories of walking around the city, occasionally stopping to buy a Fanta and a mini pizza from a street vendor (yum!). Memories of water, water everywhere. Of sitting in a gondola. Of buying coloured glass birds from Murano as presents for those at home. And of crossing bridges. Many, many bridges. Those 118 islands are linked by 400 of them. 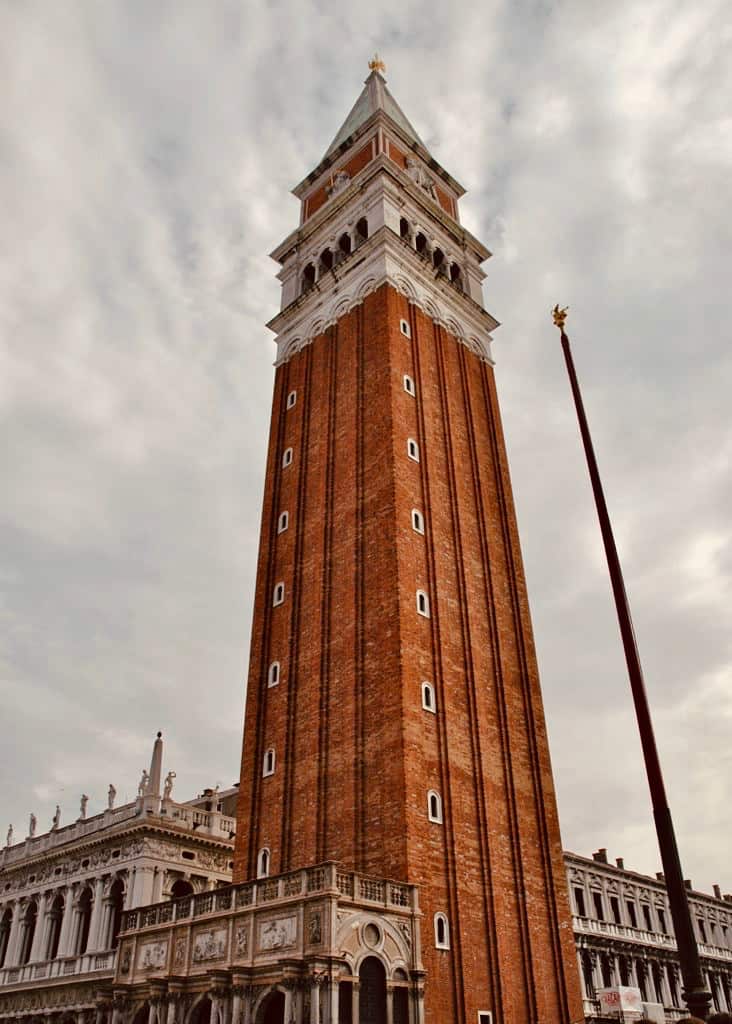 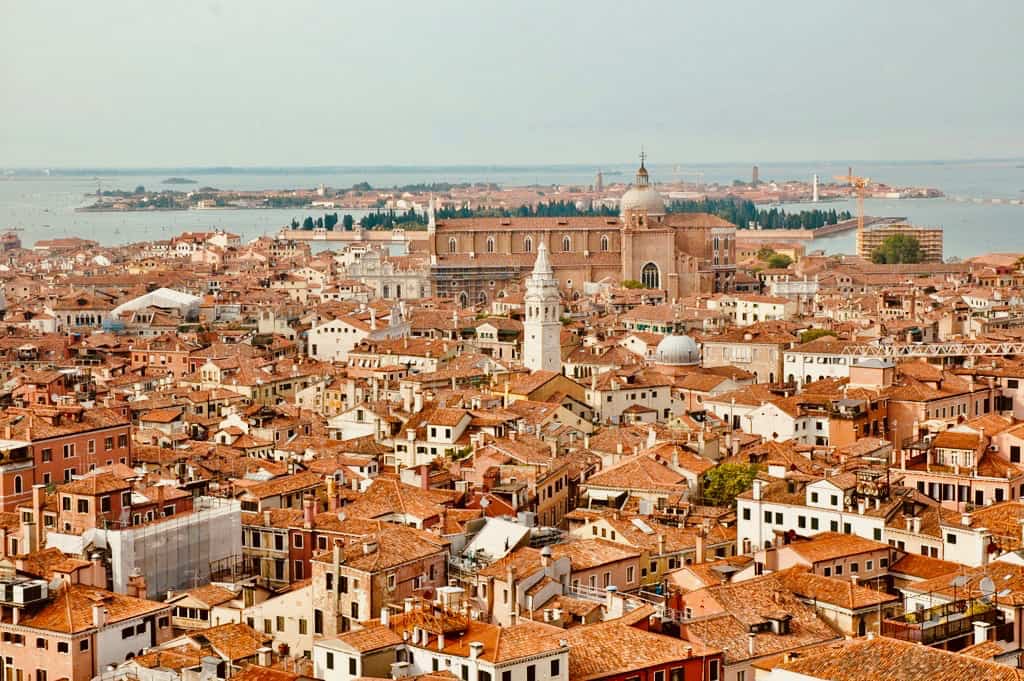 Venice from 98 metres up. 8 Euros to climb up to the top of the Campanile. Worth every step and every penny.

All these years later, I’m doing much the same. No mini pizzas, though. But seafood salads. And cured ham and cheese with wine in a hole-in-the-wall bàcaro I couldn’t find my way back to if I tried. And it’s not only my crap sense of direction. Those little wine bars have a way of hiding in that maze of back alleys that make Venice so intriguing.

Back in the 18th century, Casanova did the same, a strange man at the table next to me says. Frequent the little bàcari in these alleys, that is. I expect he wouldn’t have hesitated to strike up an (uninvited) conversation with a strange woman either. Some things never change in Italy. 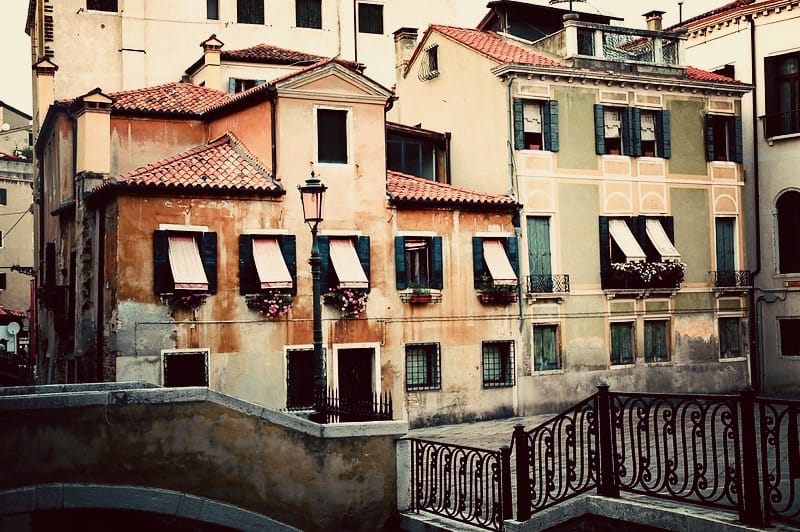 Venice has been in the news during this period of quarantine as well. No cruise ships or tourists, no gondolas or vaporettos, means the legendary canals have been left in peace for a few months now. And the water is no longer murky, but blue and clear as those Murano glass birds I once bought. There’s fish and crabs and plant life aplenty. Ducks nest at vaporetto stops. Nature has reclaimed la bella Venezia. 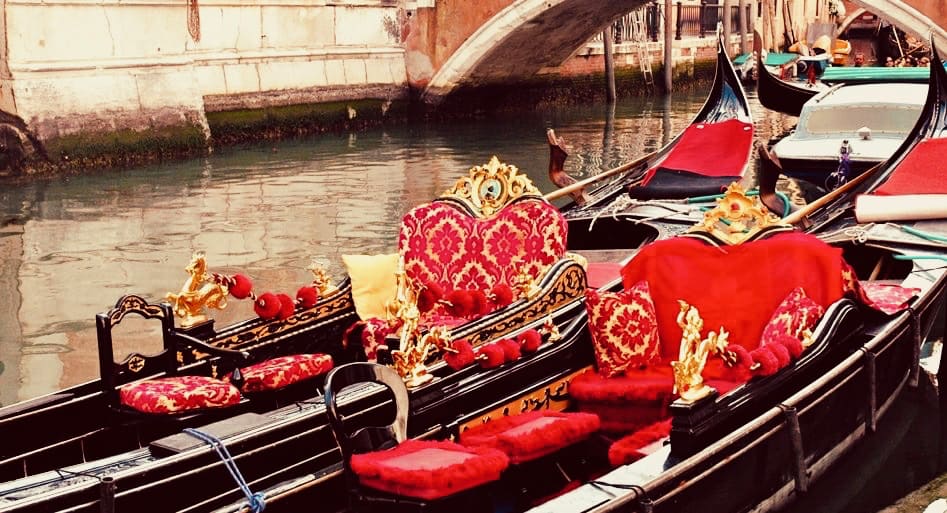 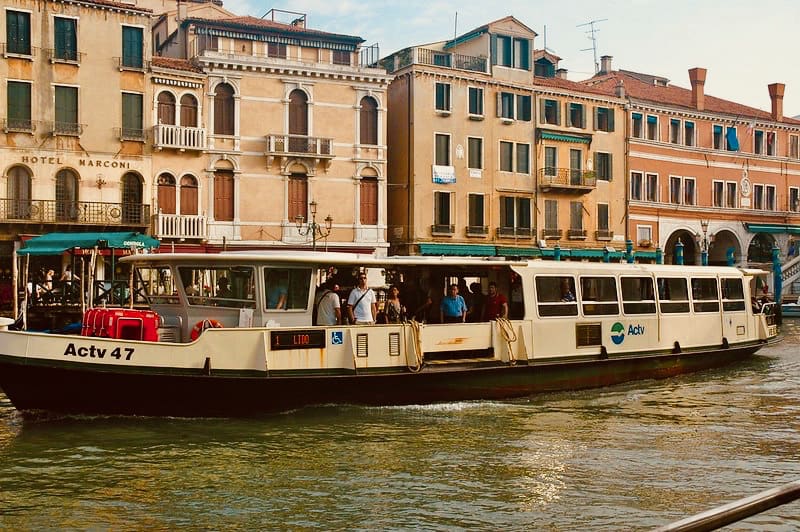 When Venice – and the world – bounce back from the current scourge, how long will that last?

Venice is beautiful – and fragile. Cruise traffic have wreaked havoc in this ancient city, not least last summer (2019), when MSC Opera crashed into the dock at La Giudecca, one of the main canals in the city. At least, that incident stuck a rocket up the… process of banning large cruise liners (1000 tonnes+) from entering the historic centre. Long overdue law.

Back in 2003, when we lived in New Zealand, I once saw The World in the Hauraki Gulf, dwarfing everything in Devonport, our little village. I remember thinking it felt like being invaded by a monster and had to remind myself it would soon be gone, and that luckily, it was a one-time thing (it was there for the America’s Cup). The idea of anything remotely similar on La Giudecca! Stuff nightmares are made of. 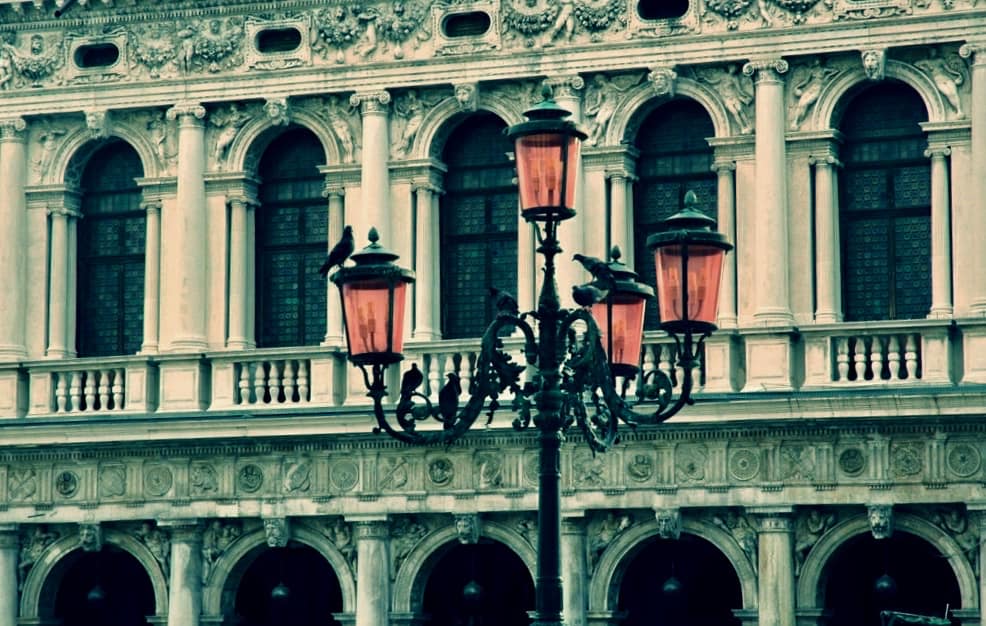 It appears I have a thing for pink lamps 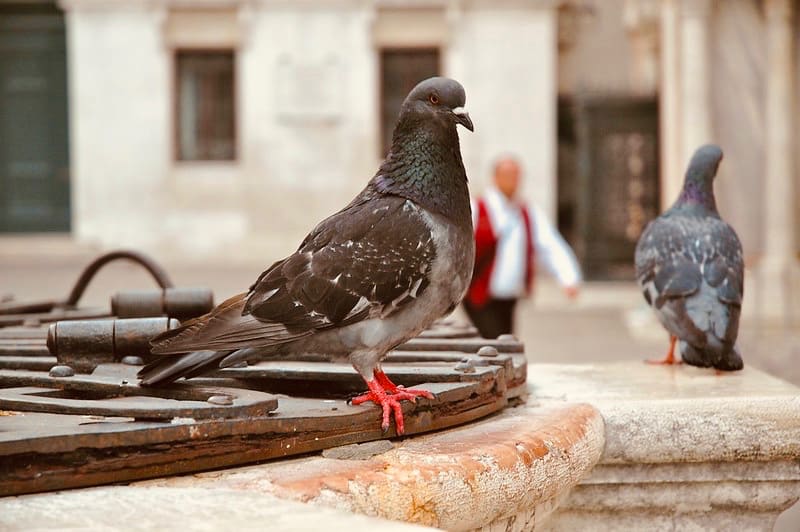 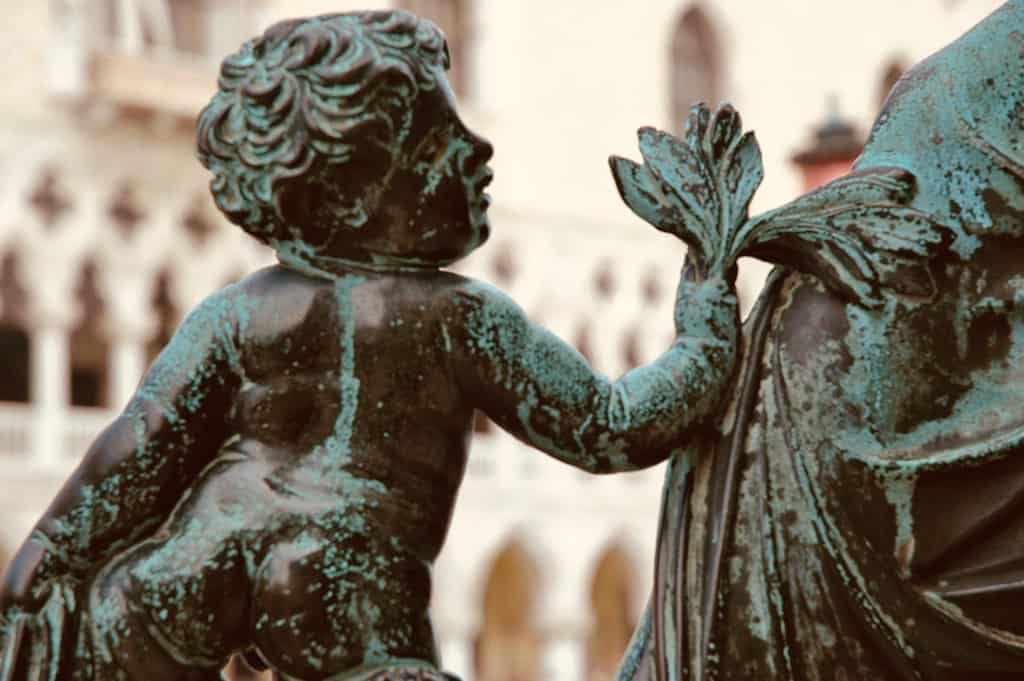 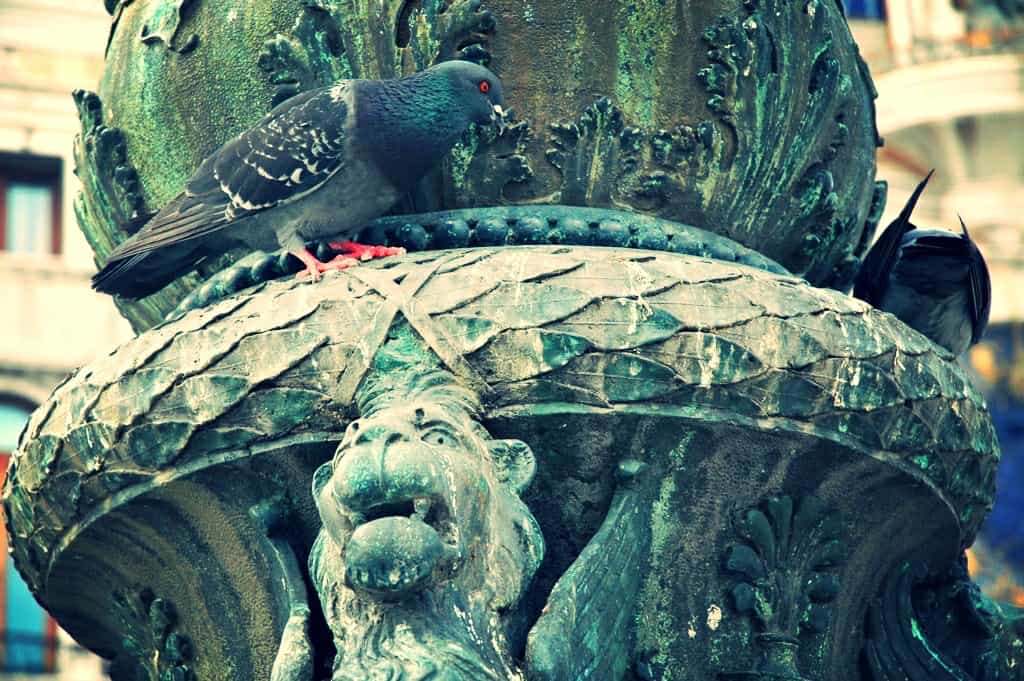 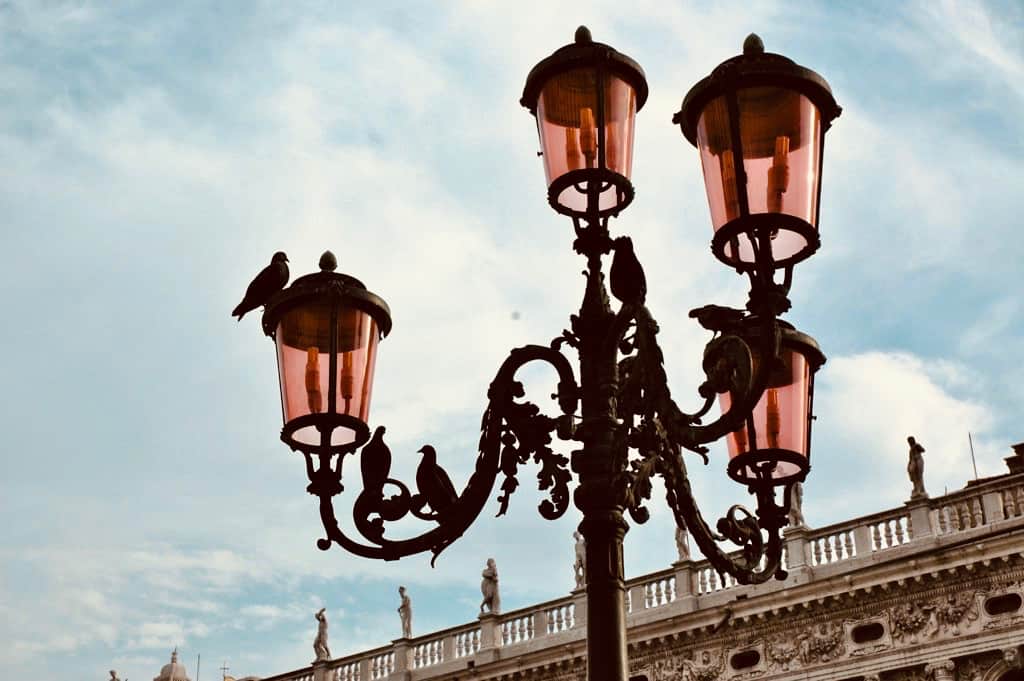 – and pigeons on statues. And on pink lamps. 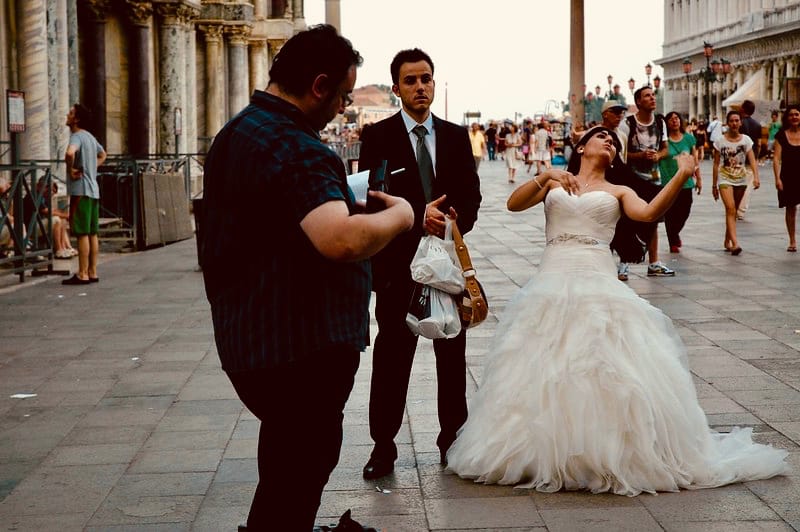 Wedding photography on Piazza San Marco. I expect there were some wedding pictures with statues. And maybe some with pigeons. And possibly some with pink lamps.

Loving her dramatic movements. I would totally do that. 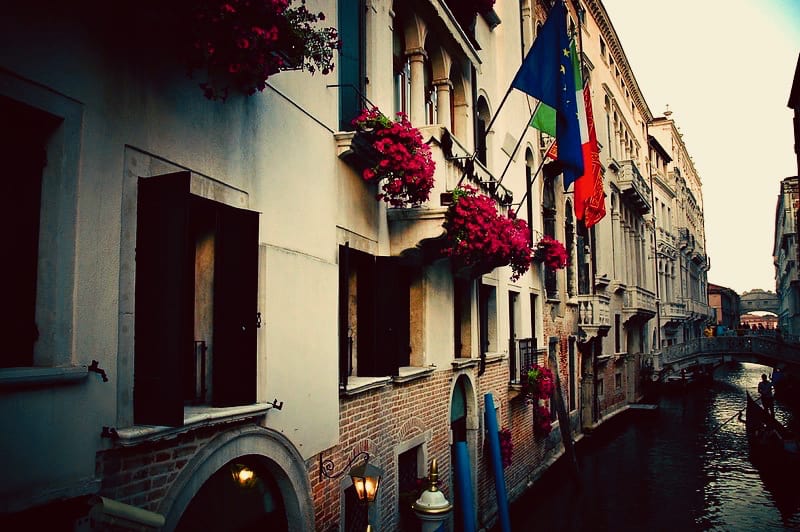 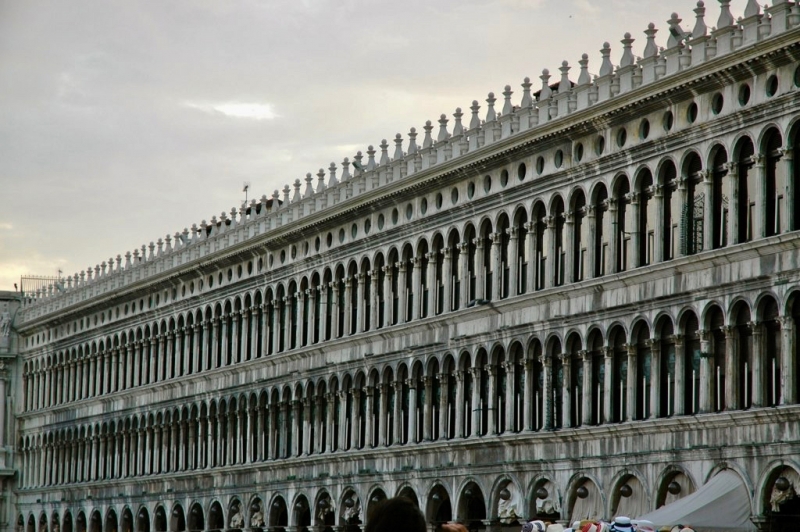 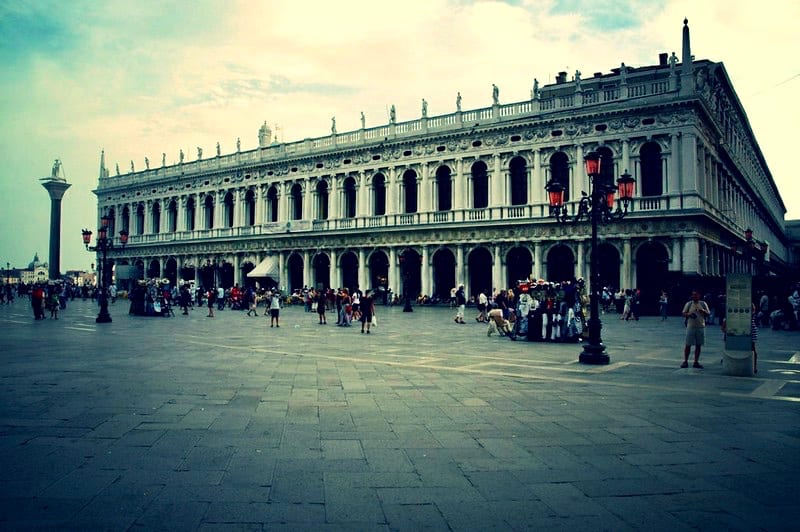 Filtered. Just because. Noticed the lamps, did you? 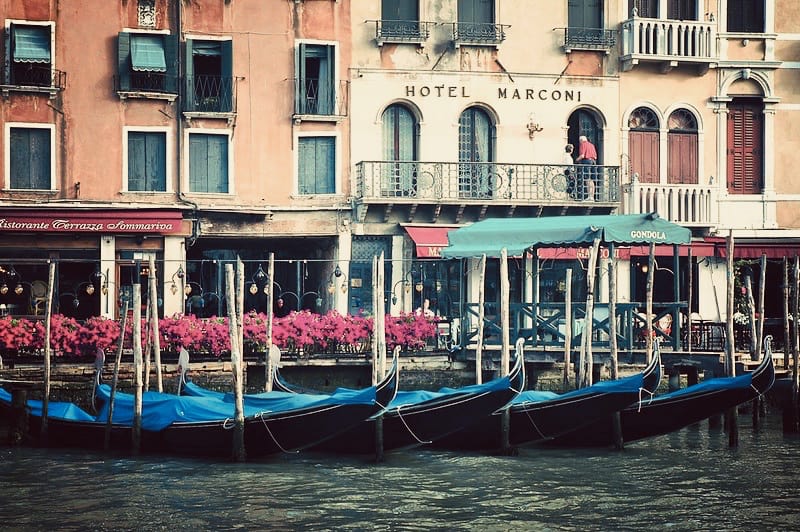 I have an urge to visit Venice in winter. February for Carnivale, perhaps. Or in quieter January. Snow on the square and in the alleys. Canals covered in mist on frosty winter mornings. Mysterious and magical. Next time. Sans corona. 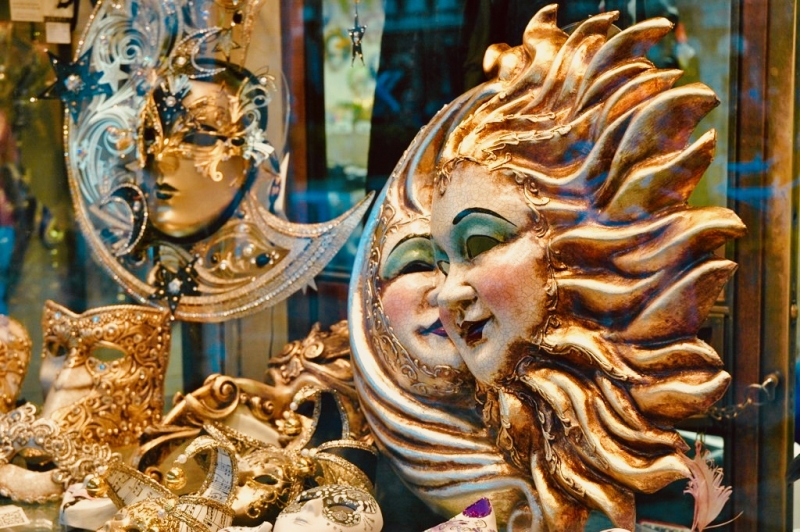 Exploring at least a few of the islands in Laguna di Venezia (the Venetian Lagoon) is well worth your time. Best known is Murano, of glass-blowing fame. Ali fell in love with its neighbour island, charming, colourful Burano.