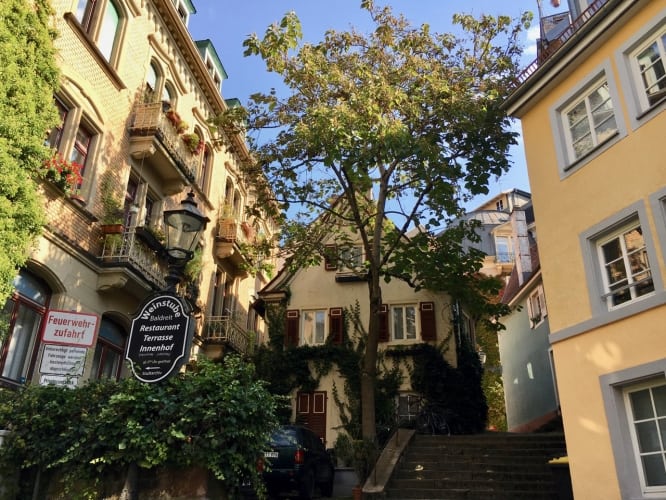 Driving into Baden-Baden, you soon see why people have been drawn to this part of Europe for millennia, ever since those ever-expansive Romans discovered hot springs here and decided to establish a city, Citavis Aurelia Aquensis (the city of Aurelia of the waters).

Ca. 2000 years later, Baden-Baden was the choice spot for royals and Europe’s very wealthy. However delicious the hot springs, though, they wanted more out of their stay than just taking baths. They wanted circus, they wanted entertainment – so why not build a casino?

That is Baden-Baden in a nutshell, then: spas and casino.

I feel people are forgetting something, though: the town itself. So on this very early Tuesday morning, killing time in a near deserted airport, I thought I’d share a few photos of Baden-Baden. There will be no casinos, no spas, no museums – hence the title here: Baden-Baden without baths. 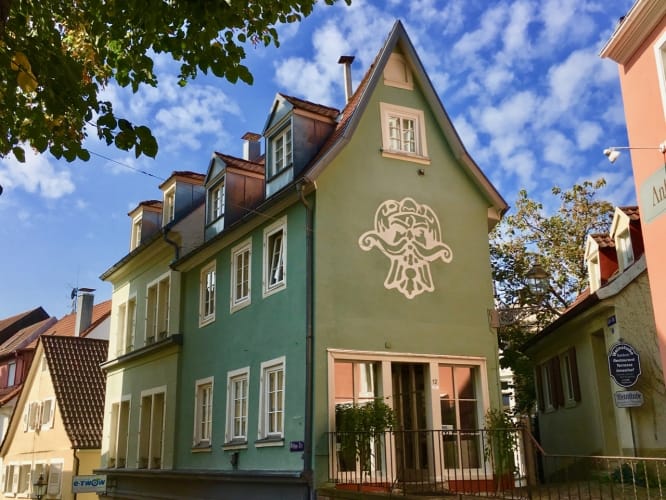 But of course you know I can’t resist interjecting a bit of ancient Rome, don’t you? Remember how they built garrisons along the borders? Lavish baths were built for emperors when they were in town – for socialising and general relaxation. But it probably wasn’t a bad place to be a soldier either. Or, for that matter, a horse. Baths were built for both (possibly less lavish). The mineral-rich hot springs had curative properties, you see – healing war injuries, so those soldiers (and horses) could be sent back healthy and ready to kick ass, defending the borders from warring tribes. Remains of soldiers’ baths have been discovered, revealing some pretty advanced heating technology. You can still see these remains underneath Friedrichsbad.

OK, enough about those pesky Romans. 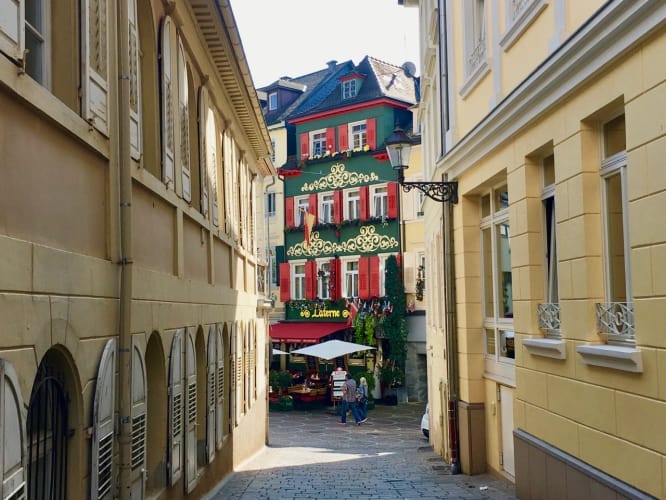 We’re in Schwarzwald, the Black Forest. Schwarzwald has always held such fascination for me. Endlessly romantic that name. I read a novel set here back in my impressionable teenage years. Can’t remember the name of the book, sadly – but I’m thinking of tragic love in the era of the Nibelungen; Siegfried and his magical invisibility cloak, hidden treasures at the bottom of the River Rhine, the murder of our hero, his wife Kriemhild avenging Siegfried’s death…

On a tour of Martin Luther hot spots in Germany a few years ago, fellow blogger Laura and I spent a few days in Heidelberg. Looking at a map, I discovered we weren’t far from the Black Forest, so I persuaded Laura we should take a day off from the (self-)righteous reformer and make a quick little detour to Baden-Baden. Now, the detour turned out to be not so quick, with road works and queues and a slightly strained atmosphere in the car, but we managed to get there and back, without killing each other. 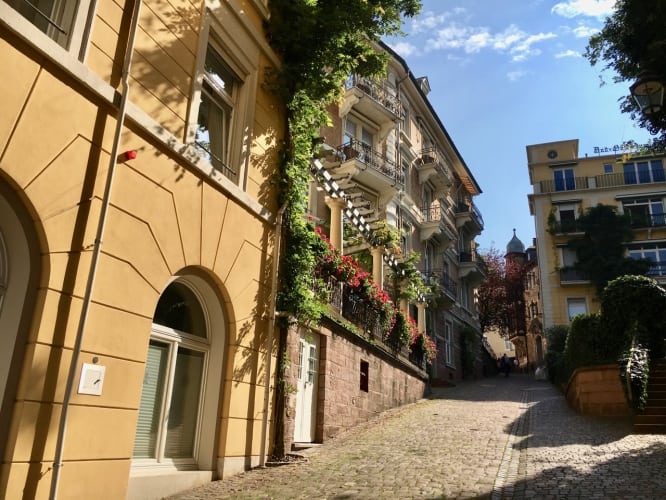 The detour was all about relaxing, not working, not planning any writing; neither visiting any castles or museums, nor a single spa (nudist or otherwise) or casino, however famous and beautiful.

What did we do? Traipsing around, that’s what. Wandering up narrow streets, past the medieval cobble stoned Marktplatz (market square), through pretty parks, lush flower gardens and large lawns that looked like my mum had been at it with embroidery scissors (she really did that).

Walking along the chic boutiques on snazzy Sophienstrasse (cause how could I not), kicking around chestnuts and autumn leaves, past windows showing Hermès belts and Picasso paintings for sale. (They don’t call Sophienstrasse the Fifth Avenue of Baden-Baden for nothing.)

At no. 30, I did not go into the museum that holds the world’s largest collection of eggs. Fabergé eggs, that is. Some of these goodies can fetch up to 30 million USD. But at no 9, I did stop at Mäx&Moritz, a delightful children’s book shop.

What else did we do? Heard oompah music, bought souvenirs and post cards, had coffee and cake at Café König.

We also heard lots of French – Baden-Baden is only 15 km from France – and lots of Russian – they have been hanging out here since Czarist times and still do: think Fyodor Dostoyevsky, Leo Tolstoy, Boris Yeltsin…

So here I am, nearly 5 years later, remembering Baden-Baden. Perhaps, in part because it was added to UNESCO’s World Heritage list last year, along with several other towns around the continent in a transnational site called the Great Spas of Europe. I have written about Baden bei Wien, one of the other great spa towns, in this post (albeit, from a rather different angle).

Here are 11 things I’ll do when I’m next in Baden-Baden: 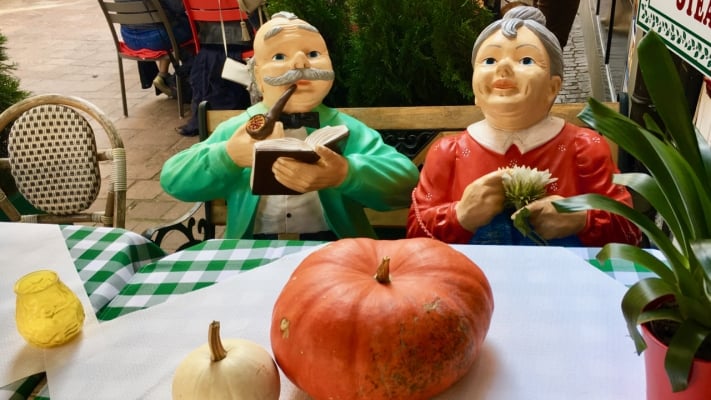 … Friederichsbad is a very large and beautiful building, and in it one may have any sort of bath that has ever been invented, and with all the additions of herbs and drugs that his ailment may need or that the physician of the establishment may consider a useful thing to put into the water. You go there, enter the great door, get a bow graduated to your style and clothes from the gorgeous portier, and a bath ticket and an insult from the frowsy woman for a quarter; she strikes a bell and a serving-man conducts you down a long hall and shuts you into a commodious room which has a washstand, a mirror, a bootjack, and a sofa in it, and there you undress at your leisure.

From A Tramp Abroad

2. Have a look at the roman bath ruins underneath Friedrichsbad.

3. Take a meditative walk along picturesque Lichtentaler Allee by the Oosleine River. Midway, stop by Gönneranlage rose garden, with more than 400 varieties of roses.

4. Stop at the legendary Fabergé Museum, and go inside this time.

5. Enter the golden-domed Russian Orthodox church, and lighting a candle.

6. Visit the Museum Frieder Burda for a spot of modern art.

7. Dress up for a bit of fun and games at the fabled Baden-Baden Casino, like Marlene Dietrich did. Queen Victoria also spent time in Baden-Baden. Did she frequent the casino? Probably not. But maybe I’ll wear a tiara anyway. Just in case.

8. Try the local wine, like the Romans did 2000 years ago. The Spätburgunder, I think (a pinot noir). Or Riesling. Hm… we’ll say both.

9. Depending on who I’m with, perhaps beer and sausages at Löwenbrau, oompah music notwithstanding.

10. Take in a symphony at Festspielhaus, one of the largest opera houses in Europe.

11. This will all require a few nights. Maybe in one of the guest rooms at the 13th century Cisterian nunnery, Kloster Lichtentaler, as an antidote to all the notorious nakedness, wicked wine-drinking and ungodly gambling. 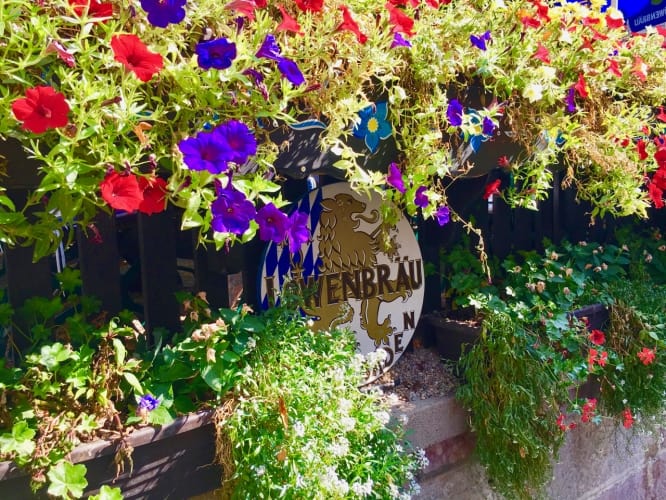 Disclosure: I was in Germany as a part of the campaign #LutherCountry, created by iambassador in cooperation with the German tourist office. Any opinion is mine, all mine. As always, as ever.

The Great Spa Towns of Europe is a UNESCO World Heritage site.