Walking with the nudes of Oslo

“This is actually quite … sexy,” Gianmarco, my Italian friend whispers. I’m showing him Frogner Park; we’re surrounded by nude sculptures – all life-size. The rain is pouring, our clothes are clinging to us. “It certainly is,” I think to myself as he brushes wet hair back from his face.

Frogner Park is a major sight on anyone’s visit to Oslo, and the sculptures of Norwegian artist Gustav Vigeland are the major attraction. Frogner Park is also where locals walk their dogs, have picnics, play tennis, swim, sunbathe and enjoy cold beers on warm summer days. Venue for the annual Norwegian Wood Music Festival, it draws artists from all over the world. Sting has played here, as have Emmylou Harris, Van Morrison, A-ha and Bob Dylan. Beer is expensive – this is Norway, after all. But entrance is free and the park has no equal.

Gustav Vigeland is justly famous for his big healthy nudes in various phases of life. The theme is humanity – relationships between woman and man, children and adults, every stage of human life. Even the unborn child is represented.

A guide is pointing out the monumental bronze fountain to a group of American tourists. Walking around the cascading water, human life is revealed to us – from birth to death to birth; the eternal cycle. Surrounding the fountain is a square mosaic, its geometrical pattern shaping a 10,000-foot-long maze. A group of kindergardeners play their way through the labyrinth, while two toddlers frolic around, completely naked. The Americans are delighted.

“Just as nature intended,” I hear a woman comment. Soon the kids are drawn to a sculpture depicting a group of laughing children using a woman – their mother, presumably – as a horse, pulling her braids. Next, they run joyfully towards the granite bridge and Sinnataggen, the angry little boy, screaming and stomping his feet. Angry Boy is a small bronze statue and arguably the most popular in the park. It’s also the best loved statue. When he was stolen some years ago, it caused a public outrage. He was found 11 days later; the city authorities took great care to bolt him down after that.

The children play Angry Boy. Laughingly, they stomp their feet and roar. I think adults would like to do that as well. What a deliciously tempting way of venting frustrations. Screaming children? Scream back! Unfair boss? Throw a tantrum! Stuck in traffic? Honk and yell!

Near Angry Boy is a statue of a man juggling four children, three on his arms and one on his foot. Pretty hard to imitate. Gianmarco laughingly picks up a little girl and spins her around. Soon the children line up to be lifted and whirled. Close by, a school class is on an art excursion. Two pre-teens blushingly copy the statue Young Lovers, while being drawn and photographed by their classmates.

Two hundred twelve bronze and granite statues are spread out over 80 acres. While we stroll lazily along a maple-lined avenue, fingers loosely intertwined, the rain abates to a warm summer drizzle. A rainbow appears above the Wheel of Life at the far end of the park, the air is thick with the luscious scent of roses. Frogner Park is home to more than 14,000 roses, of 150 different varieties.

Today, we’re surrounded with roses of every imaginable colour, glistening with raindrops. On the Monolith Plateau, a 55-foot-long column rises proudly. Carved from one block of granite, the Monolith consists of 121 nudes, climbing towards… what? Vigeland refused to assign a meaning to his column. To him, the statues depicted life and the Monolith belonged to the world of the imagination. So the viewer is left to decide. Some suggest man’s yearning for heaven – full of hope and joy. Gianmarco hints at a more earthly purpose – equally full of hope and joy. He leans over, puts his lips to my ear and elaborates. 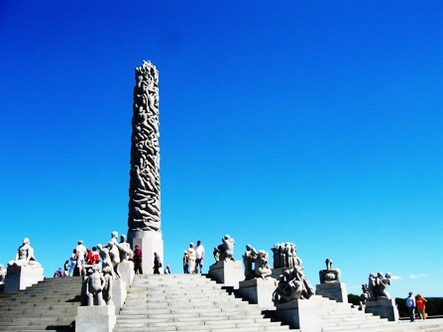 Vigeland also designed the lay-out of the grounds. Unfortunately, he died in 1943 and did not live to see his work completed.

As we walk towards the tall wrought-iron gates, Gianmarco strokes the velvety leaves of a deep red rose. “Home?” he asks, eyes sparkling.