I was first in Washington DC more than 20 years ago. And at the time, I had other things on my mind than wandering about. You see, there was this boy…

But let’s get on with it, shall we?

And let’s get the bad over with right away. Bad photo, yes, but, I think, appropriate to illustrate a bad reality: queuing for passport control at Dulles International Airport took two hours. Two hours! Can’t remember the last time I’ve experienced this kind of inefficiency anywhere. Next time, I’ll arrive by train.

In case you were wondering which is the world's most inefficient airport, Washington Dulles wins by a landslide… 2-hour queue for passport control. 2 hours!

I did manage to visit a few of the museums at the Smithsonian last time I was here and still remember the fab Air and Space Museum. Here are two non-Smithsonian – and very quirky – museums. How can one not be curious about an International Spy Museum? And a Museum of Crime and Punishment? Though, ‘stop by’ is hardly the right term. Both are so intriguing. If you’ve got kids with you in DC, the Spy Museum in particular will be a highlight.

Exquitsitely evil. Could be interesting…

I’m drawn down a street by a number of police cars and lively music. (Turned out there’s a Latino festival going on). On the way down the street, I happen to pass the building where Abraham Lincoln spent the last few hours of his life. A visit inside the Ford Theater is now on my list of things to do when next in DC.

She won’t think anything about it

A place of infamy

Lincoln’s last words are reputed to be She won’t think anything about it – a reply to his wife who was concerned that a Mrs. Harris might notice the presidential couple holding hands. Rather sweet, I think.

The haunts of George W.

A short distance across the border in Virginia is Alexandria, home of the somewhat reluctant first president, George Washington. He lived at Mount Vernon out in the country but kept a cottage in Alexandria. He ate at the Gadsby Tavern (as did I) and went to this church for Sunday service. I sat in his pew.

Interesting bit of history for sure. However, my favourite discovery in Alexandria was the brilliant water fountains. Gotta love a town which provides easily accessible, clean water for Fido.

Strolling around DC, one can’t miss these imposing monuments to the two presidents… 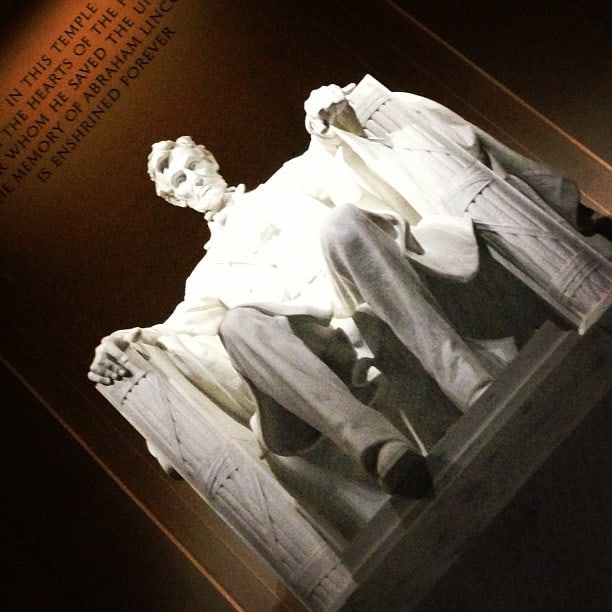 … and the rows upon rows of graves at Arlington cemetery.

The Kennedy clan is buried here, of course. But I know hardly anything about the more than 400 000 others. Except Ron Brown. He was the first African-American Secretary of Commerce (under Clinton) and he died in a plane crash in Croatia during the Balkan Wars. Other than that, I don’t know much about him either. Yet I found myself looking at his grave for quite some time – one of relatively few grave stones that aren’t white here at Arlington. And as with Greta Garbo, it didn’t feel right to photograph his grave. So I didn’t.

My final Instagram is from the Occidental Grill. Stay clear of the drink Smokey and the Bandit (just trust me). Otherwise, it’s a lovely restaurant with good food and history looking right at’cha. The walls are covered with signed photographs of everyone and his cousin: presidents, politicians, journalists, artists, actors, sports personalities and, my favourite, Amelia Earhart. But that’s not all.

The booth where the Cuban missile crisis was resolved; no World War III

In this booth, you see, World War III was thwarted – and a nuclear WWIII at that. Pictured here is news correspondent John Scali, who met with Alexander Fomin from the Soviet embassy at this very table during the Cuban missile crisis. Papers changed hands and war was averted. This is what the brass plaque says:

At this table during the tense moments of the Cuban missile crisis a Russian offer to withdraw missiles from Cuba was passed by the mysterious Russian ‘Mr. X’ to ABC-TV correspondent John Scali. On the basis of this meeting the threat of a possible nuclear war was avoided.

Been in DC? What’s your favourite feature of the city?