Where in the World 7

We haven’t had a travel quiz for quite a while. Today is Wednesday, so why not. 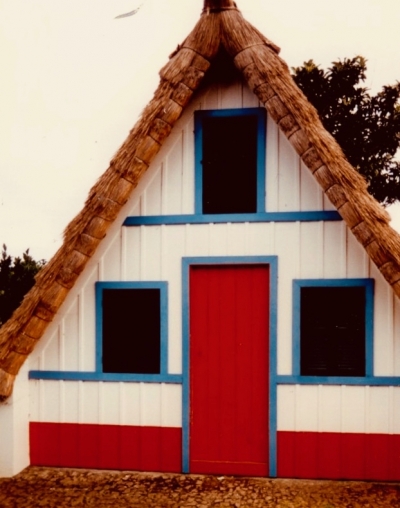 Where in the world is this unusual and colourful house?

Think you know this week’s mystery location? A winner will be selected among those who give the correct answer. They will be featured here on “Where in the world?” and on Sophie’s World Facebook fan page with their name, blog, SoMe channel of choice and a short bio. I’ll provide a few hints before Friday.

Hint:
1. This is a traditional home in this area on this island.
2. The island is an autonomous region of a European country, one of the outermost regions of the EU.

Moderation is switched on, so don’t worry about giving away the answer if you know it. All comments will be published simultaneously on Friday. So go on, have a guess!

Update 14 January: Mystery location revealed
This is a traditional farmer’s house in the Santana district on the island of Madeira in the Atlantic Ocean. It’s an autonomous region of Portugal, and is, together with the Azores, one of the outermost regions of the European Union. Madeira is a beautiful volcanic island with rivers, valleys and rugged mountains. You may have heard of Madeira wine. The island is also famous for organising the world’s largest New Year’s Eve fireworks show (officially recognised by Guinness World Records, no less) – and for the most stunning array of flowers.

Thanks for playing, everyone! Mette of ItalianNotes, Jarmo of Arctic Nomad, Ricardo Pais, Robert, Jessica of Suitcases and Sippy Cups and Don Faust of C Around the World all knew.

Among the right answers, Robert’s was the most correct and wins this little quiz. Robert does not have a website or a blog. He is simply a guy who likes to travel – and to read about travelling. How cool is that! CONGRATULATIONS, ROBERT!