Where in the World 6

Where in the world is this evocative cemetery? 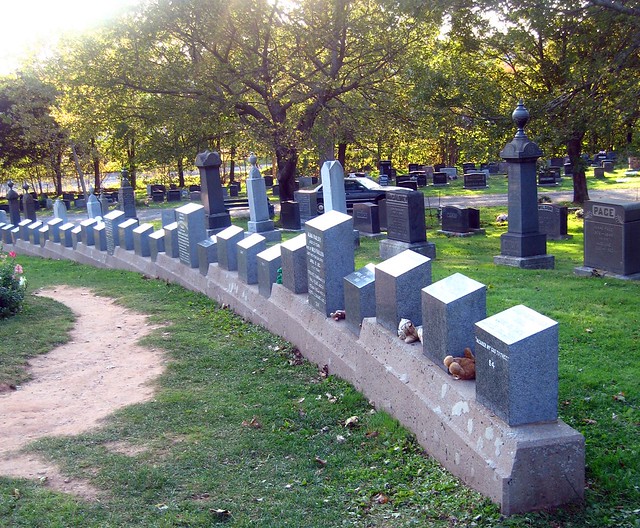 A crisp autumn day three years ago, the girls and I walked through this cemetery. It was a melancholic walk past the graves of hopeful immigrants, of children, of those never found. Two questions this time: Where in the world is this cemetery and what did the people in this section – from several countries and all walks of life – have in common?

Moderation is switched on, so don’t worry about giving away the answer if you know it. All comments will be published simultaneously on Saturday. So go on, have a guess!

Update 29 October:
This mystery location is in Canada: Fairview cemetery in Halifax, Nova Scotia. As one of you spotted, it looks like the grave stones are set up so as to resemble the bow of a ship. Although that wasn’t intentional, it’s somehow fitting, as these are the graves of victims of the RMS Titanic, one of the most fatal maritime disasters in history. 333 of the more than 1500 victims were recovered and brought to the closest city, Halifax. The majority were buried at this cemetery.

Grave no 227 is that of one Joseph Dawson. After the film Titanic, broken-hearted teenage girls have wept at his grave, with their minds firmly on Leo di Caprio. The real J. Dawson, however, was a crew member from Dublin. He was a trimmer (one who channelled coal to the firemen at the furnaces) and though he hasn’t much in common with James Cameron’s fictional vagabond charmer, the history of the real J. Dawson is interesting in its own right.

Quite a few knew or guessed the answer, including Jenny of Devour the World, Nancie of Budget Travelers Sandbox, Mette of Italian Notes, Vera Marie of A Travelers Library, Sherry of Colorful Footsteps, Angela of Chasing the Unexpected, Lisa of Gone With the Family and Alouise of Traveler Ahoy, Isobel (via e-mail) and Judy of Road Stories (via facebook). Well done, everyone!

Among the correct answers, I chose Jenny Kayano as this week’s winner. Jenny runs the deliciously named blog Devour the World, all about living the experiential life, devouring the world, one bite at a time! Follow her on twitter and have a look at Devour the World on Facebook. Congratulations, Jenny!