Windhoek, a touch of Germany in Africa

My friend Laurel, author of the lovely Monkeys and Mountains, is presently exploring Namibia. I was reminded of my visit in this country in the south-western corner of Africa and inspired to dig out the photo albums. 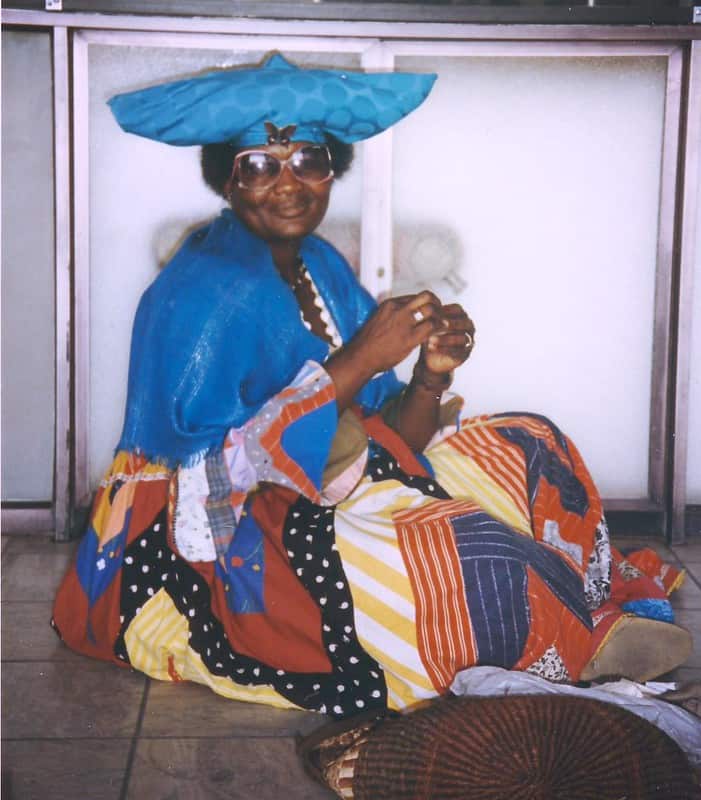 Travellers flock to Namibia to get up close with wildlife, to see Etosha National Park, the Skeleton Coast, Fish River Canyon, the sand dunes at Sossusvlei, the Caprivi Strip and Swakopmund. Most barely stop – in fact, many aren’t even anywhere near – the country’s capital Windhoek. (Laurel is doing both – here is her article on the Namibian capital.)

It’s the other way around for me: I’ve only been in Windhoek. Not because I have anything against nature’s wonderful work of art in this country – all the aforementioned are on my wish list. I simply didn’t have time.

I only had a few days at the end of a deliciously busy roam around in South Africa and wanted to spend them in a city. Preferably a new one. There’s something wonderfully exhilarating about cities – relaxing and invigorating at the same time.

Now, not all cities are exciting. At least, it wasn’t to my younger self (regrettable case in point: Gaborone). And as cities go, with around 300 000 inhabitants, Windhoek isn’t exactly a metropolis. Nevertheless, it was an easy and lively place to spend a few days.

I was there when Namibia had just become independent from South Africa, after 22 years of brutal warfare. The country was no longer called South-West Africa and the Namibian dollar was scheduled to replace the rand later that year.

Strolling past a travel agency in Cape Town one day, I saw a poster of Windhoek and impulsively bought a ticket. A few hours later, I boarded an Air Namibia flight which stopped in Windhoek en route to Luanda. Somewhat ironically, by the time I landed, I knew much more about Luanda than I did about Windhoek. You see, I happened to sit next to a lovely Angolana couple, and back then, people still had conversations on planes. These days, we’re all absorbed with our gadgets, aren’t we… increasingly anti-social. In real life, at least.

A touch of Germany in Windhoek 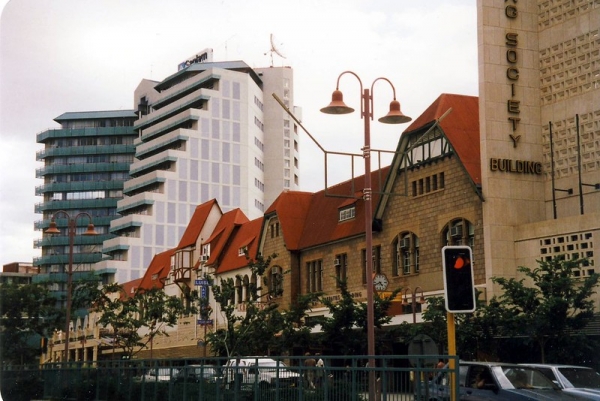 One of the first things I noticed about Windhoek was its Germanness.

Wait, Germanness? In Africa? (And yes, according to Wiki, Germanness is a word.)

Why, yes. Nambia, you see, was once a German colony. Now, we’ve all heard of the British and French in Africa. We know of the troubled former Portuguese colonies where war raged for decades until fairly recently. And we might even be familiar with the horrible King Leopold of Belgium, who used Congo as his own personal ‘slice of magnificent African cake’. But Germany? Not exactly a well-known colonial power.

It was all politics, of course. Otto von Bismarck, Chancellor of the German Empire, wanted to avert British intrusion in the area, and so the country we now know as Namibia became German South-West Africa in 1884. It didn’t last long. In 1915, during World War I, South African forces defeated the Germans and South-West Africa became an unofficial part of South Africa.

78 years later, I thought I had been transported to Bavaria. Windhoek simply felt like Germany with an African flair. Consider these factors:

The Lutheran church was – and still is – the major religion. Here is Christuskirche, Christ Church, in the middle of the city. Lutheran, of course. 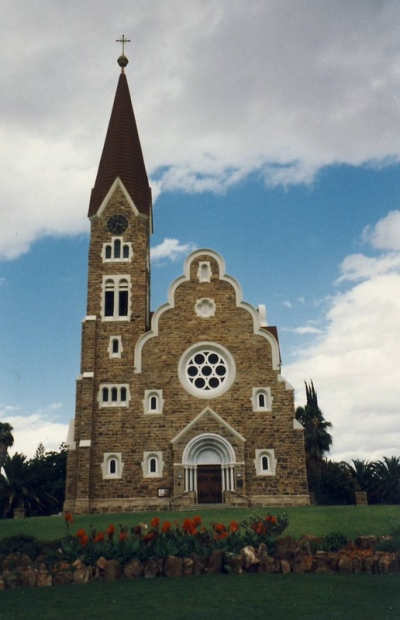 Reiterdenkmal and Südwester Reiter, the Equestrian Monument and the Rider of the South-West, is a memorial to the dead on the German side during the Herero War, a local uprising against colonial rule in the early 1900s. A monument honouring dead German soldiers – and not a mention of the dead Herero and Damara people, who died in far, far larger numbers. What’s more, Hitler used this monument in books and films, as propaganda for German rule in Africa. 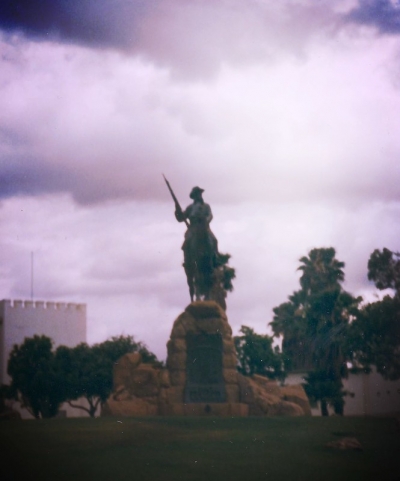 You’d think that come independence, the monument would soon fall, like so many Lenin statues around the world. Not so. Reiterdenkmal has had a kind fate. When I was in Windhoek, the monument was still in its original location, near Christ Church. Three years ago (in 2010), it was moved and re-erected in front of the old fortress… which still bears the name Alte Feste.

There weren’t any bed and breakfasts in Windhoek, but rather Pensione. I spent one night at Pension Cela, where I was given semmeln, sausages, cheese, fish, boiled eggs – in short all the makings of a German breakfast – by a lady which brought me right back to my host mother during a youthful summer at language school in Bregenz. The next night, I stayed at Pension Steiner, because of this lovely pool. 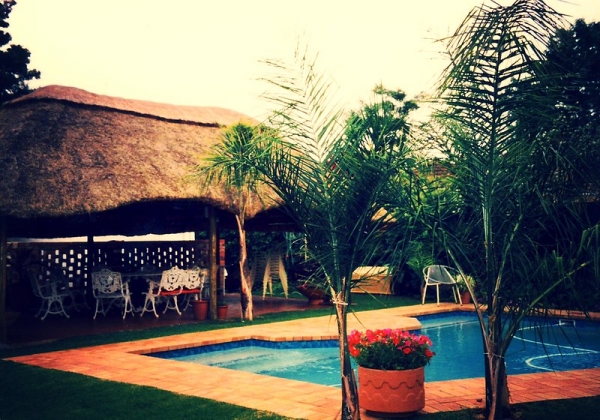 Most curious of all, people still spoke German, including these ladies in traditional attire. Which, by the way, is inspired by the dress of German colonialists from the Victorian era, hats, petticoats and all. 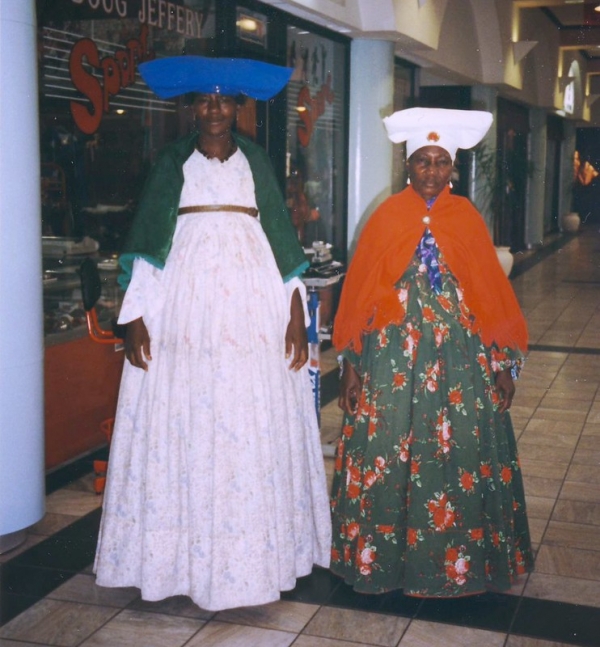 Have you been in Namibia? Or are you curious about it?