The powerful Hanseatic League has been mentioned frequently on this blog, and we’ve covered several Hansa cities: Hamburg, Bremen and Lübeck in Germany; Torun, Gdansk and Krakow in Poland; Tallinn and Riga in the Baltic countries. In neighbouring Sweden, there’s Stockholm and enchanting Visby. In Belgium, there’s Bruges and Antwerp. Finally, there’s lively London and beguiling Bergen. And there are many more. 192 cities in 16 countries. They got around those medieval traders of Northern Europe. 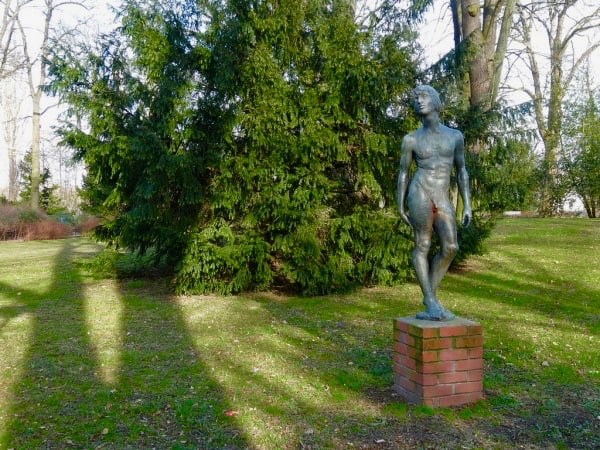 We’re not done yet. In fact, I might just write a lengthy post on the league itself. It’s intriguing stuff, folks! Especially in these ongoing Brexit times. I suspect there are many, and not only in the UK, who might like the EU to be more like the Hanseatic League – more about trade, less about politics and centralisation.

Did you know a new Hanseatic league was formed earlier this year? The bi-monthly mag The American Interest, calls this cooperative effort between 8 Northern European EU-countries

a model of pragmatic cooperation [which] proves that a bloc doesn’t need supranational ambitions in order to be successful. 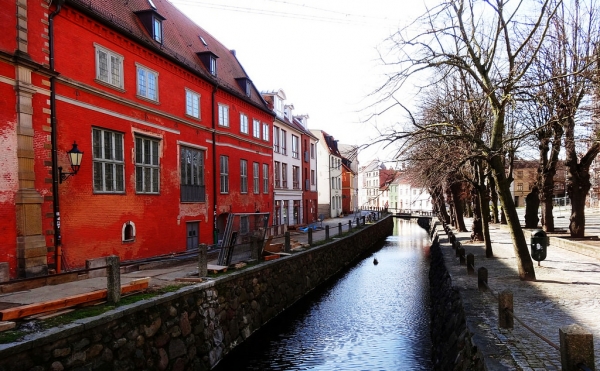 One of Wismar’s pretty canals

But for now, we’ll focus on architecture; that of Hansa city and former DDR-city Wismar specifically. This time, we’re a little further out from Hamburg (1hr 40 min by train) than Lübeck and Bremen, but still a daytrip within reason.

In Wismar, trade flourished during the Hanseatic period. There was nothing modest about the guild’s self-confidence, and that influence is visible still in the city’s well-preserved buildings. The architecture of the time called for tall red brick towers – to show off wealth and power. You can see the 80-metre-tall spire of St Marien-Kirche (St Mary’s Church) from land and sea; once this tower served as guide for ships approaching. 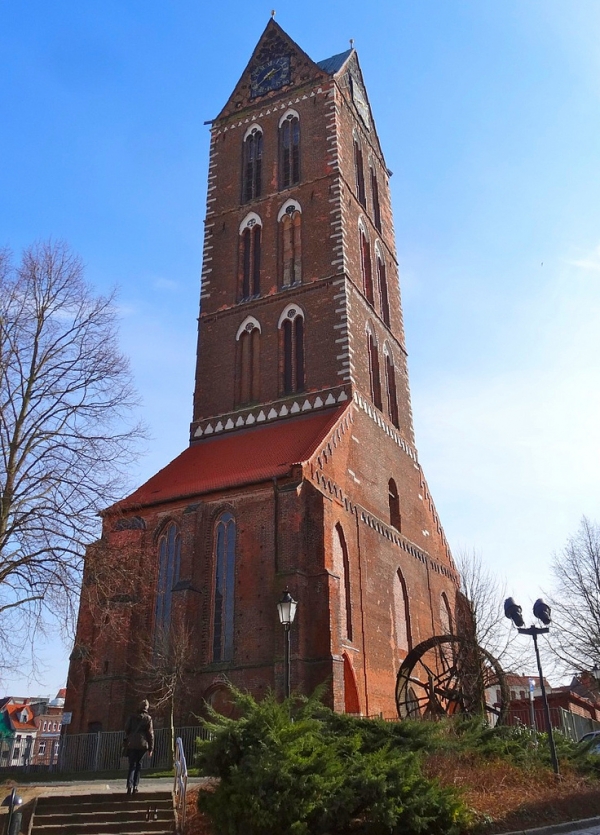 St Marien-kirche itself was damaged during the last world war; today only the tower remains. However, St Nikolai-kirche (St Nicholas’ Church) will give you an idea of how massive these brick cathedrals were. 144 steps take you to the top of St Nikolai for great city views. 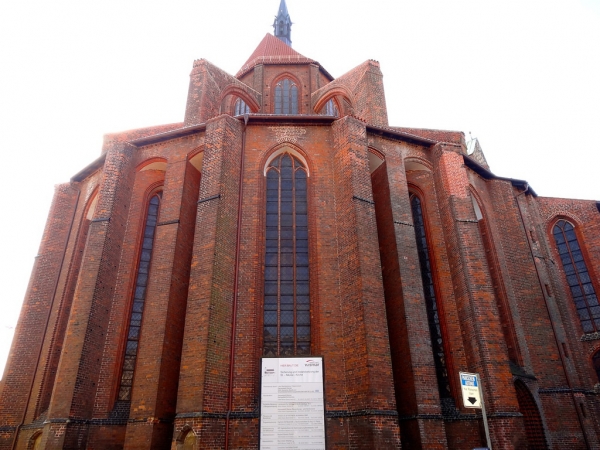 Equally important is the classicist town hall on Wismar’s Marktplatz, Germany’s biggest market square, 10 000 m². Underneath the town hall was a medieval wine cellar, closed in 1809, but reopened in the mid-1980s, with then newly discovered medieval murals. 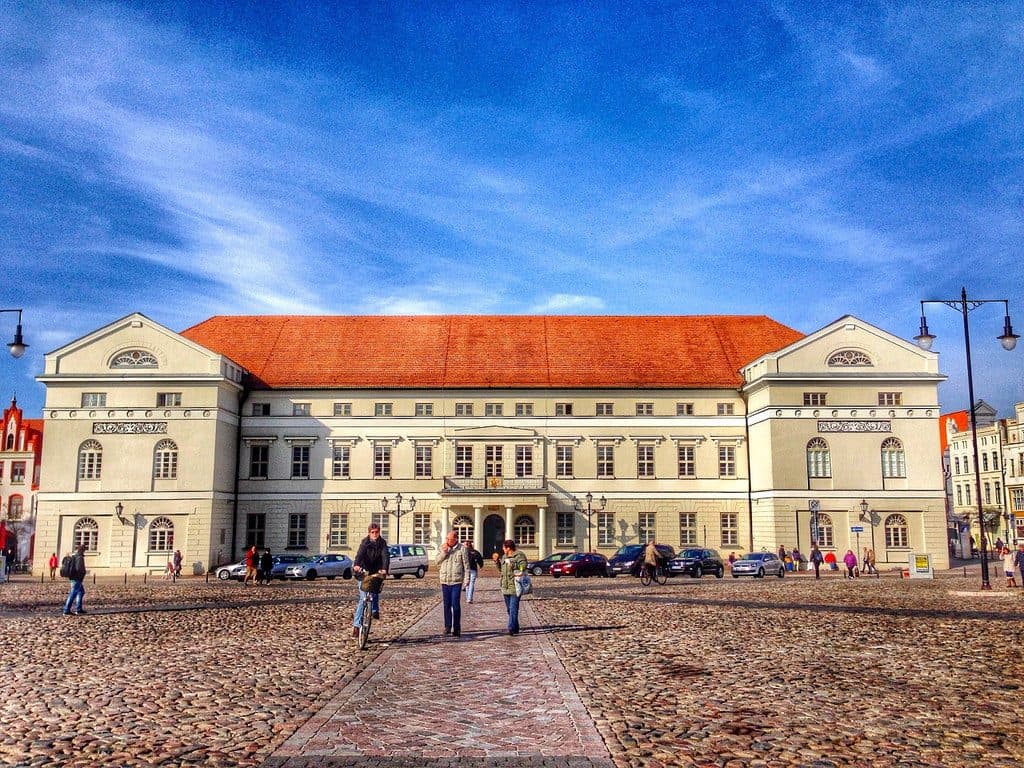 On a corner of market square is Wasserkunst am Markt (meaning Water art on the Square), a 16th century well that supplied water to the residents of Wismar for centuries, until 1897. Gorgeous, isn’t it? 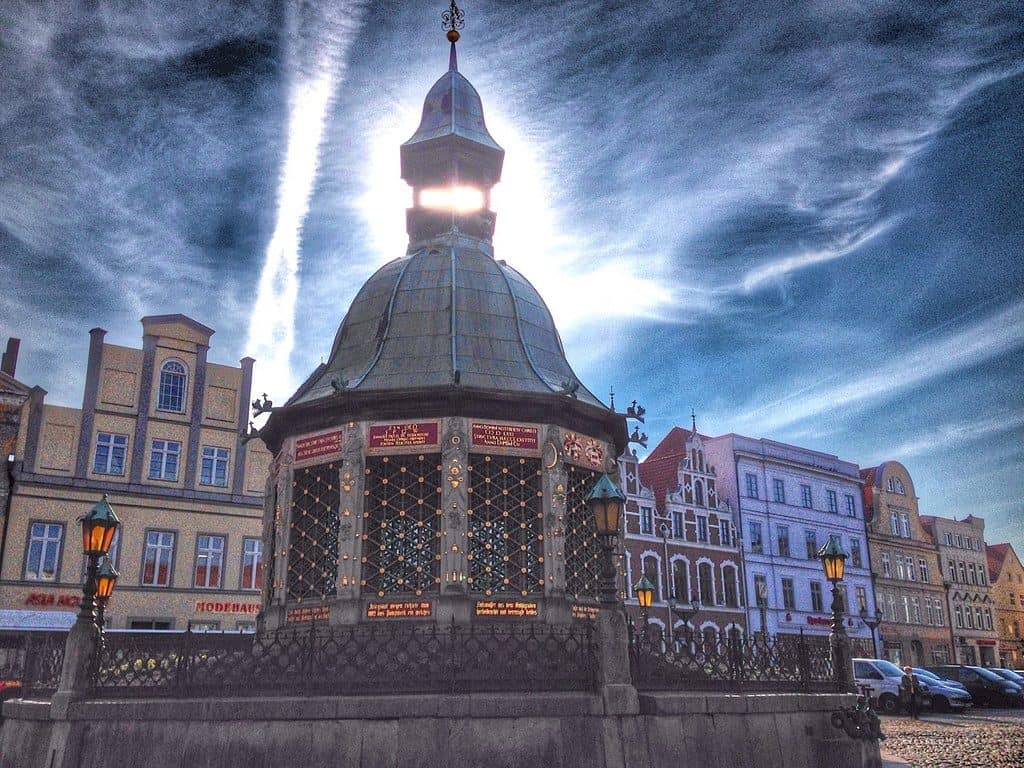 The Thirty Years’ War ended with the Peace of Westphalia in 1648. One result of this peace agreement was that Wismar was given to Sweden. Although Sweden sold the town to the state of Mecklenburg in the early 1800s, you can still see Swedish markers, such as the impressive Alter Schwede (Old Swede). This 14th century building is regarded as one of the most beautiful and valuable Gothic buildings in all of Germany. Today, it houses a good restaurant with a fascinating historic interior. 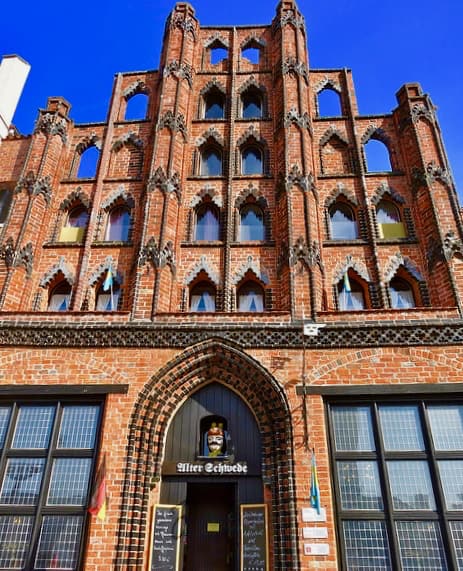 Alter Schwede, on the east side of Marktplatz

You’ll also find Schwedenköpfe, Swedish heads, scattered around the city, and there’s a Swedish festival every August, where German and Swedish military forces join together for entertainment and show. 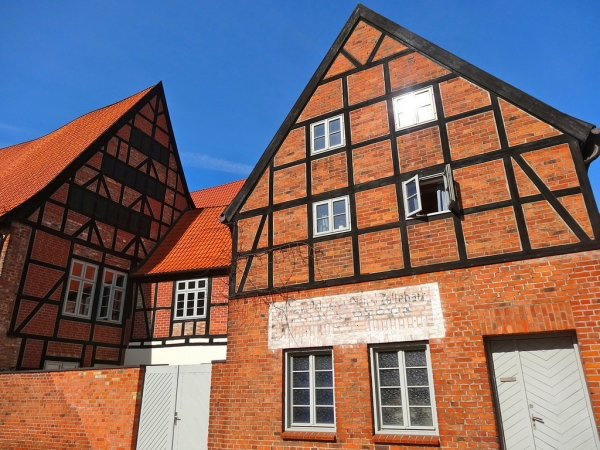 In modern times, Wismar was stuck behind the Iron Curtain for forty years, sadly neglected. Or perhaps not so sadly, as neglect meant the medieval buildings were left standing rather than replaced with 50s and 60s concrete. After the German reunification, Wismar is one of several East German historic cities that have been beautifully restored – with kilometre upon kilometre of quaint cobbled streets and half-timbered houses. 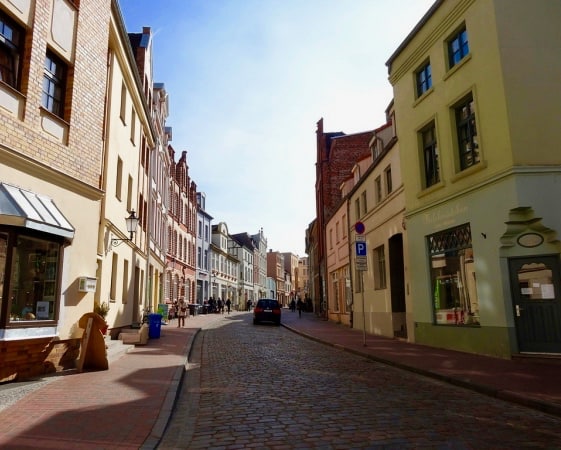 Not only centuries’ old Swedish heads abound in Wismar, but also pigs. By the Schweinsbrücke (Pigs’ Bridge), you’ll spot these delightful ones, the work of local boy Christian Wetzel. 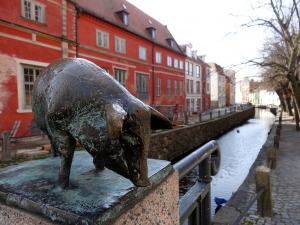 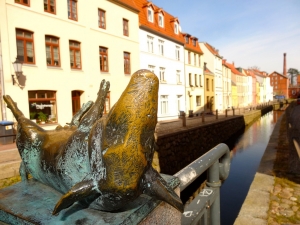 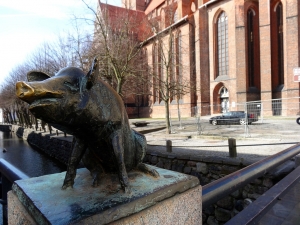 Laughing piggies by the canal 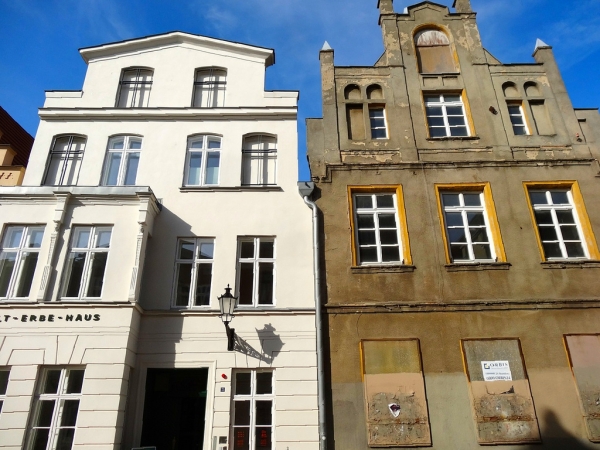 Wismar has its own world heritage house on Lübsche Straße 23, part of an important trade route in the Hanseatic era. This house from 1350 had a large ground floor hall for handling merchandise, with storage areas above. The merchant family lived in a courtyard wing. There’s a bit of political history here as well; it housed the Kulturbund der DDR (Cultural Association of the GDR) from 1950 until reunification. 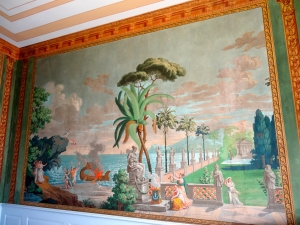 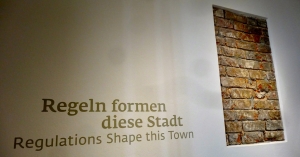 We’re in Germany, after all 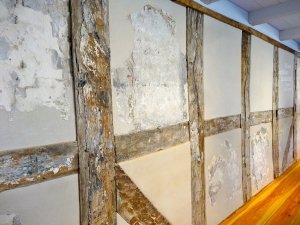 The city’s history is brought to life here; it’s well worth your time to stop by. You’ll also find more general information on UNESCO’s programme. The house was renovated in 2014 at a cost of EUR 4 million. All in all, Wismar is treating its world heritage status with an impressive degree of professionalism (again: we’re in Germany… – expect nothing less.) 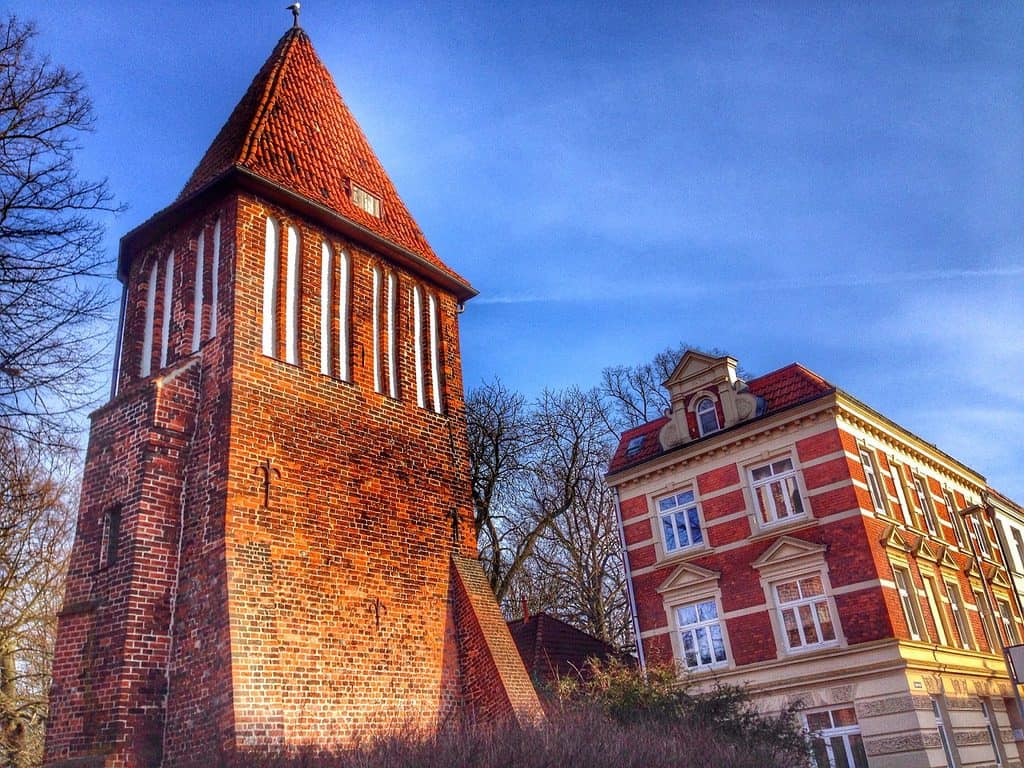 Things to do in (and around) Wismar

Here’s a few suggestions for a day in Wismar:

We’ve suggested Wismar as a daytrip from Hamburg. If you’re in Wismar for longer, and want to explore nearby nature and towns, you can always cycle south to Schwerin along the Baltic Sea route. It’s about 35 km. You can do it. While in Schwerin, have a look at the castle with its lake and pretty gardens. About 2.5 hours further east (that’s by train, not bike) is Stralsund, whose historic centre is co-listed with Wismar’s, also well worth a visit. Between the two is Rostock, yet another Hanseatic city, and Graal-Müritz, spa resort of the DDR political elite back in the day. You could easily spend weeks here on Germany’s Baltic coast, staying in different towns and villages every day.

It’s November, so I thought we could all use a little dose of spring. Easter flowers in Wismar.