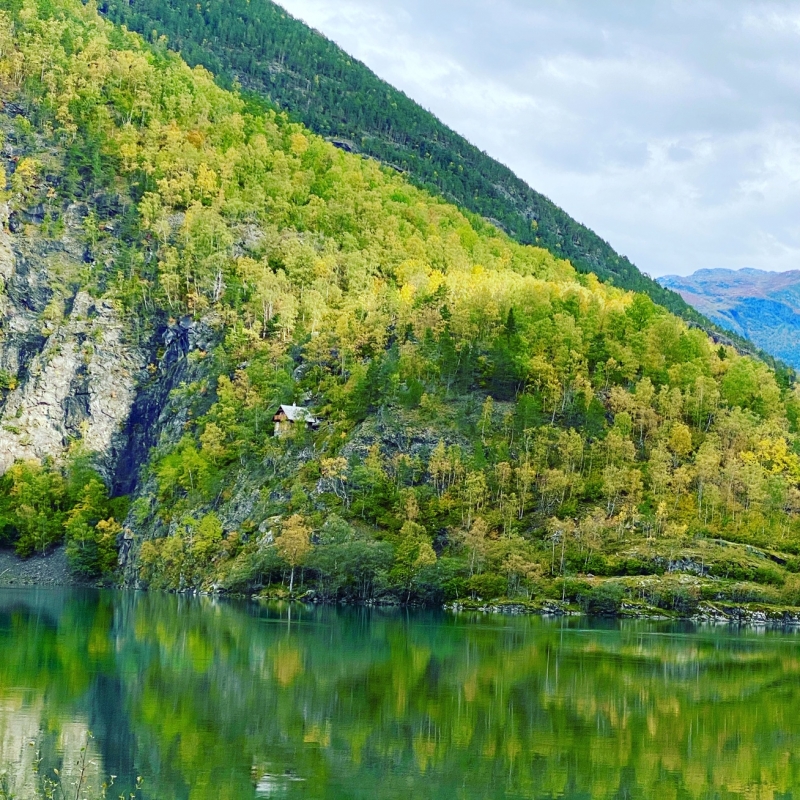 See the house perched on the rock there? This is not exactly the best picture I’ve taken. I snapped it as I drove past, thinking that this, this is Norway in a nutshell. Find a remote, inaccessible spot, and build a cabin. Or a house even. (Maybe this natural inclination for isolation is part of the reason we’ve been spared the brunt of corona…?)

But as it turned out, this isn’t the home, or even cabin, of a local. It was built by none other than Austrian-British philosopher Ludwig Wittgenstein. When he decided to come and stay in Norway, his mentor, Bertrand Russell, is rumoured to have said:

Didn’t have too favourable an impression of this land of mine, that Russsell. But I’ll forgive him. He can’t have known any better, the poor misguided soul.

Wittgenstein did know better. In 1936, he wrote to his colleague G. E. Moore at Cambridge:

I can’t imagine that I could have worked anywhere as I do here. It’s the quiet and, perhaps, the wonderful scenery; I mean its quiet seriousness.

Wittgenstein found his ideal spot at the Lustra Fjord, the longest side arm to the more famous Sognefjord. He liked it so much he had this cabin built, near the little village Skjolden. I don’t blame him; and can tell you from recent first-hand experience this is a stunning area.

He stayed here many times over the years, sometimes for 18 months at a time, when he needed peace and quiet time to think.

And think he did! He was super productive here, getting the ideas that laid the foundation for Tractatus Logico-Philosophicus.

I remember reading it as a teenager, and frankly not understanding half of it. Damn frustrating! Maybe I should dig it out of the attic, and take it here to Skjolden for a fresh look. Reading it here at the cabin, looking out over the landscape.

The cabin was restored last year, even the outhouse. You can borrow the key at the Co-Op in Skjolden. It’s a 1.2 km walk from the nearest car park. You need proper hiking boots. But you already guessed that, didn’t you?

World at a Glance is a series of short articles here on Sophie’s World, normally with a single photo, portraying curious, evocative, happy, sad, wondrous or unexpected little encounters.