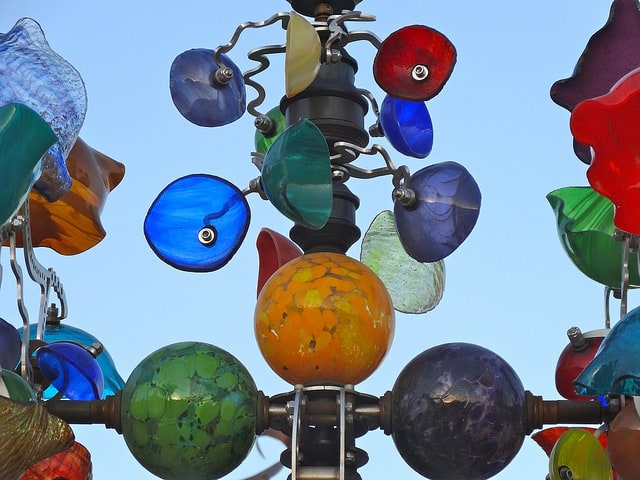 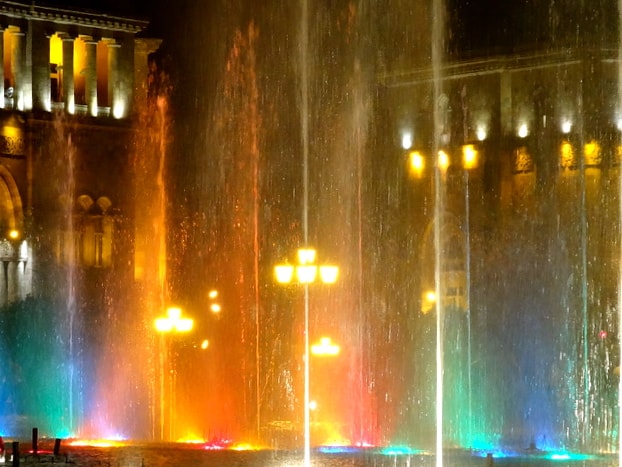 It has been quite a while since we have had a segment in our Magic of Cities series. Well, wait no more.

I utterly enjoyed this curious city in the Caucasus and it quickly climbed up the list of my favourite cities. Yerevan is all about colour, water, music, life… this is a city that makes you want to dance. And you can, of course. Every night between 9 and 11, Republic Square becomes a lively meeting place for friends and families and the occasional tourist – all there to watch the fountains dancing, with water and lights, to the rhythms of Armenian folksongs, classical music, jazz, pop and rock. Seeing the fountains perform to the Ride of the Valkyries is spectacular against the backdrop of the neoclassical buildings on the square. 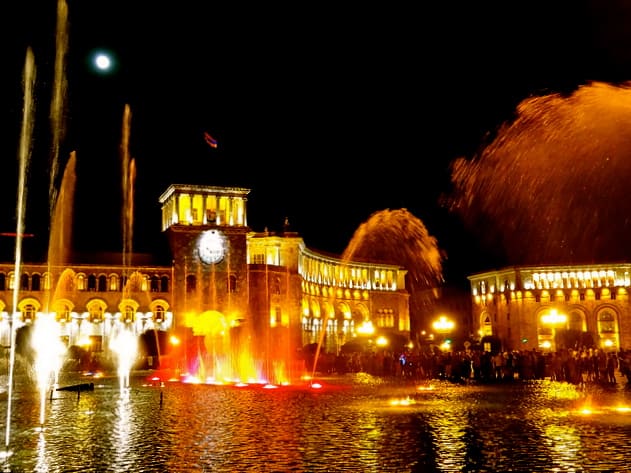 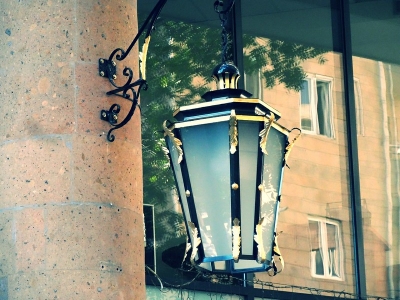 Armenia was part of the Soviet Union for most of the 20th century, and that past is still visible in the city’s architecture. The railway station (below), which I quite like, still has a hammer and sickle on top of the spire. 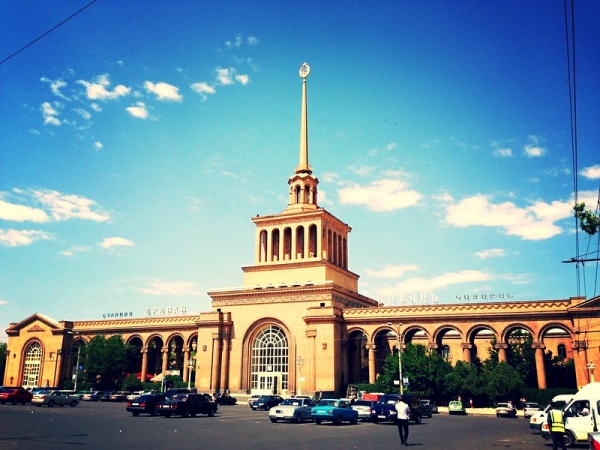 Another example of the Sovietesque style is the Moscow cinema, built on the site of a Stalin-demolished church. There has been talk of demolishing the cinema to rebuild the church, but luckily, the cinema has many die-hard supporters. I think it is a beautiful building. 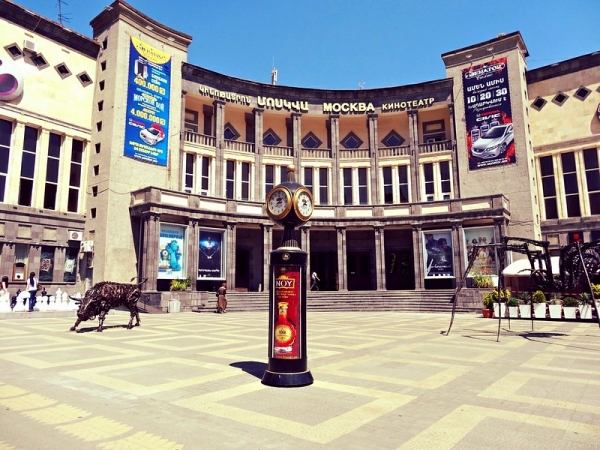 Kaskad – and public art in Yerevan 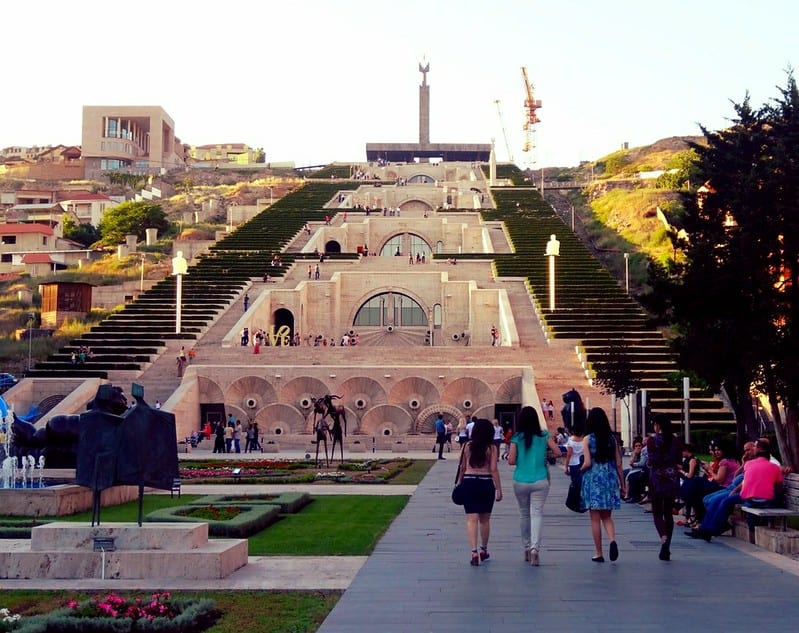 However, the prize for the most remarkable Soviet Era structure in Yerevan goes to this stairway known as Kaskad, the Cascades. After the collapse of the USSR, Kaskad has been taken over by an Armenian-American, Gerard Cafesijan.

While in Armenia, I became oddly obsessed with Mount Ararat. When I was told this mountain of legend and lore was best seen from the top of Kaskad in the morning, I naturally wandered up the many stairs – again and again. Such a wonderful climb, surrounded with quirky sculptures and fountains, all part of the private collection of said Cafesijan.

In the sculpture garden at the foot of Kaskad are three works by Colombian sculptor Botero, including the sensual smoking woman. 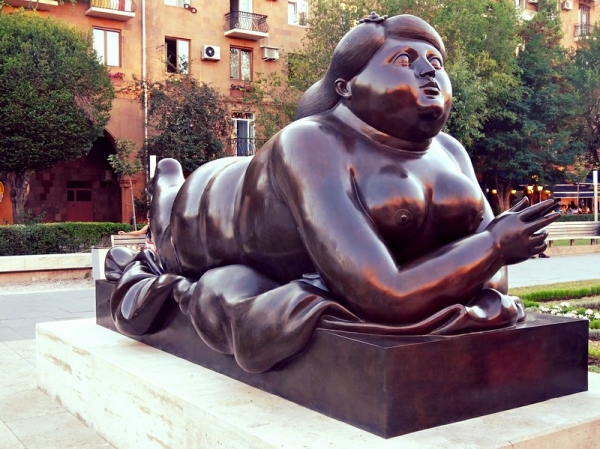 Jaume Plensa, who is responsible for the work Conversation in Nice has a few of his thought-provoking shadow sculptures here as well. 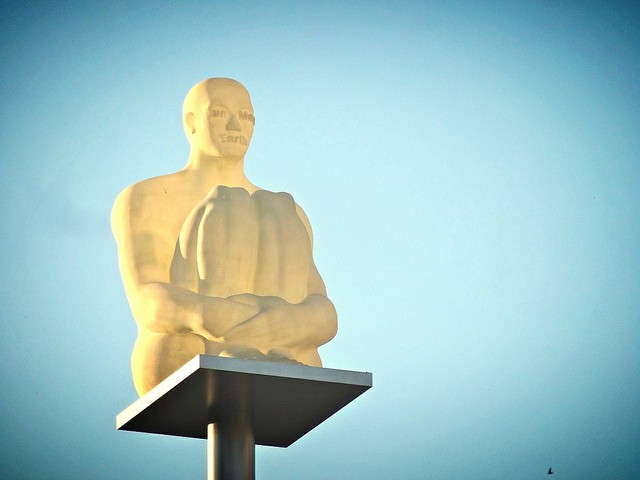 I loved these vivid, wacky trees against the cityscape backdrop… 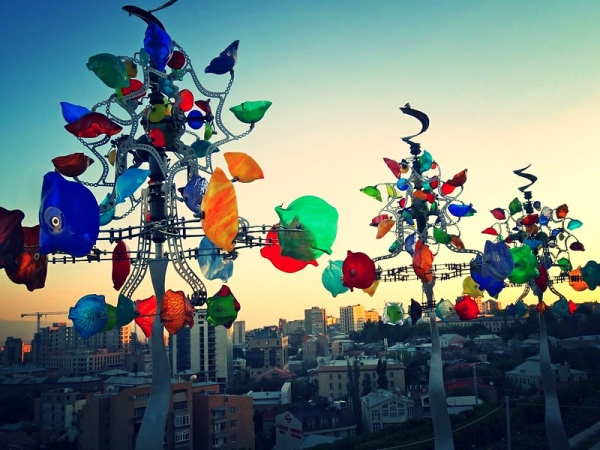 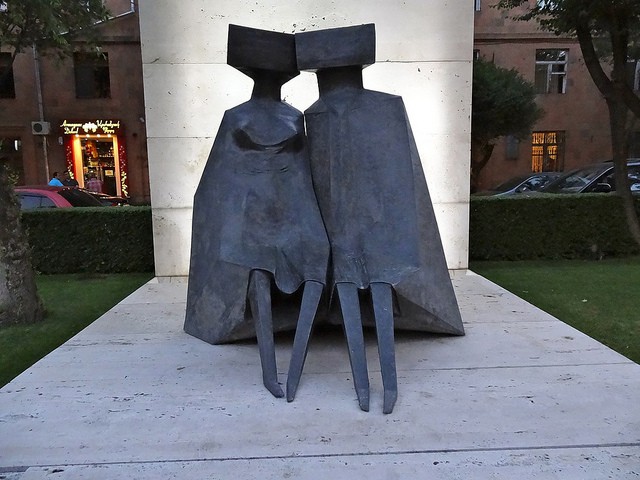 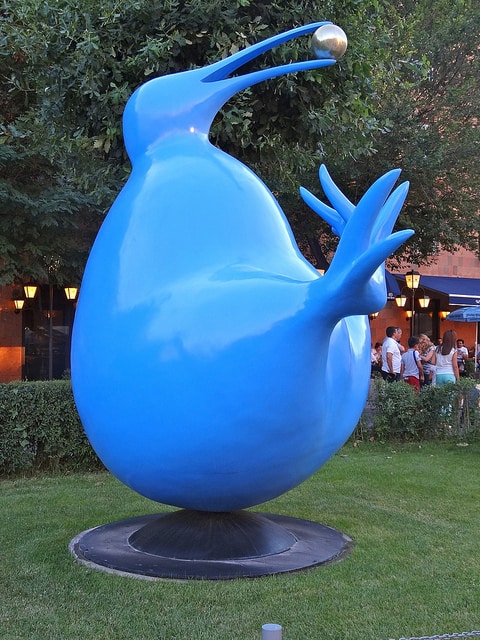 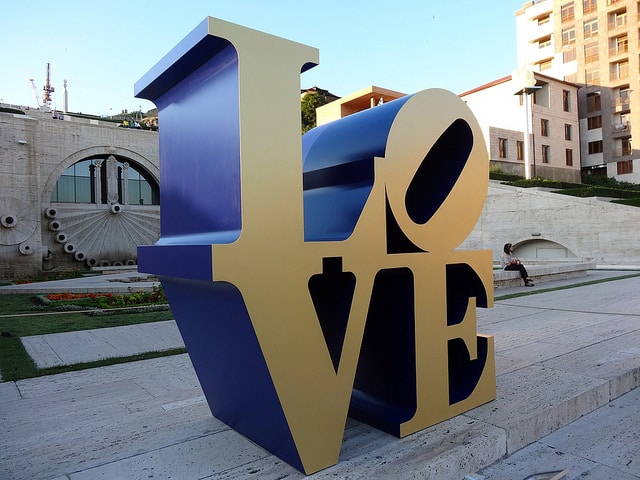 … and this giant teapot. Relieves stress just looking at it, doesn’t it? 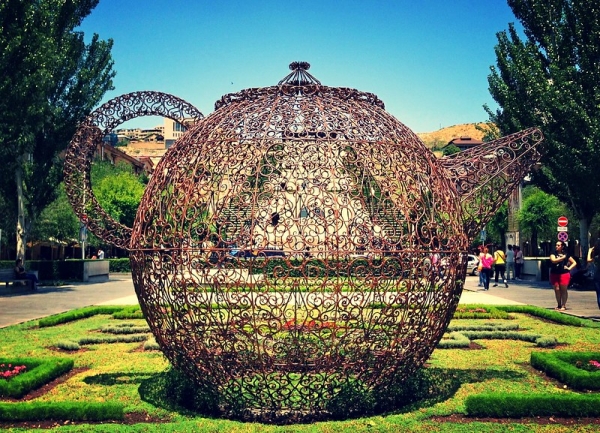 But public art is not limited to Kaskad; in fact, you will stumble upon it all round town. This sculpture is known as Men, and is from a local 1970s comedy film. 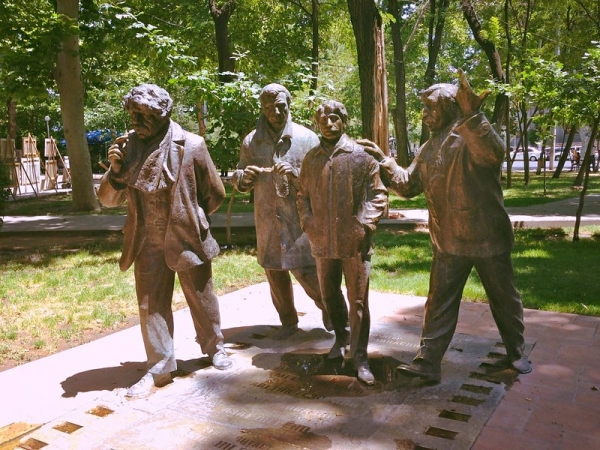 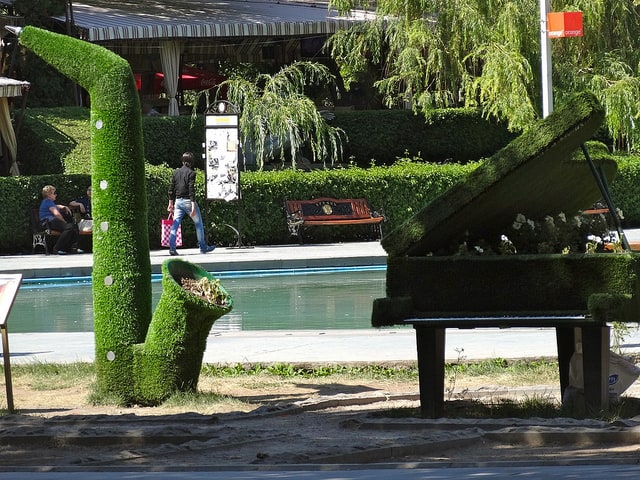 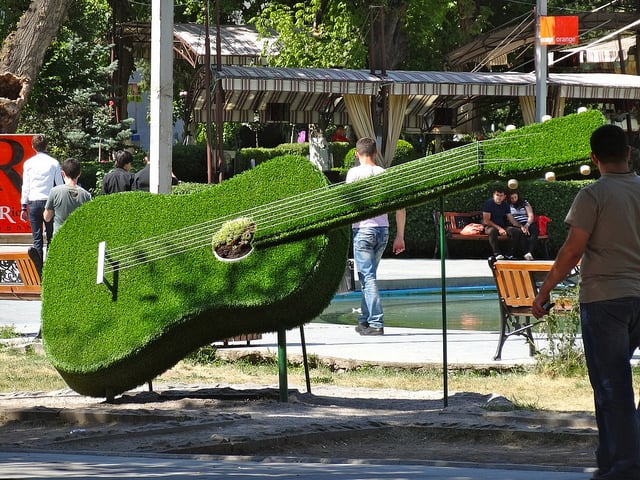 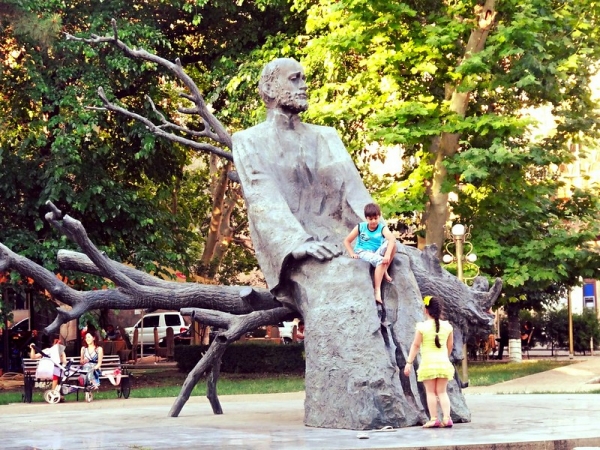 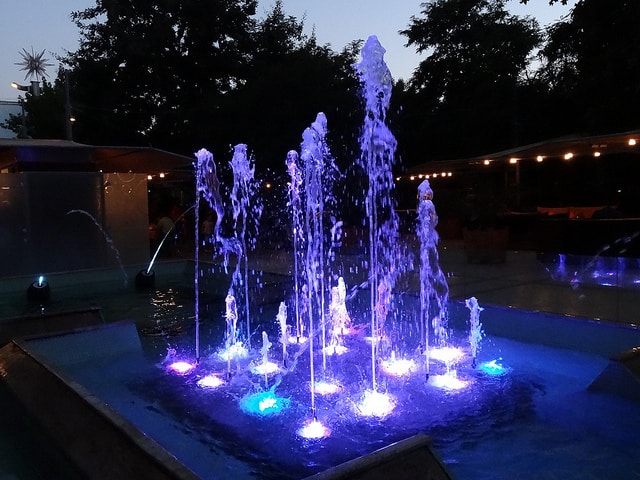 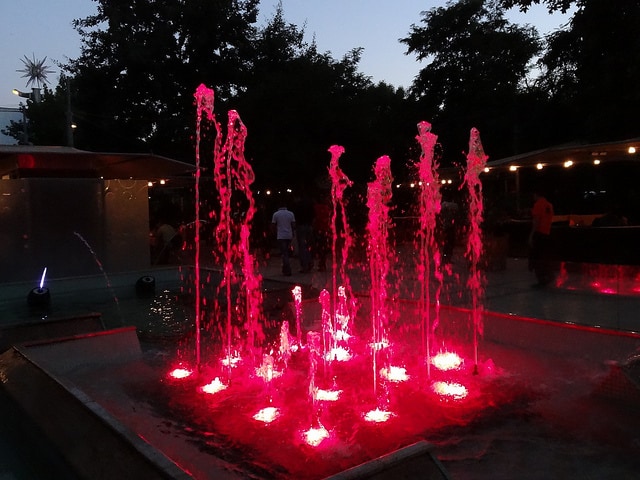 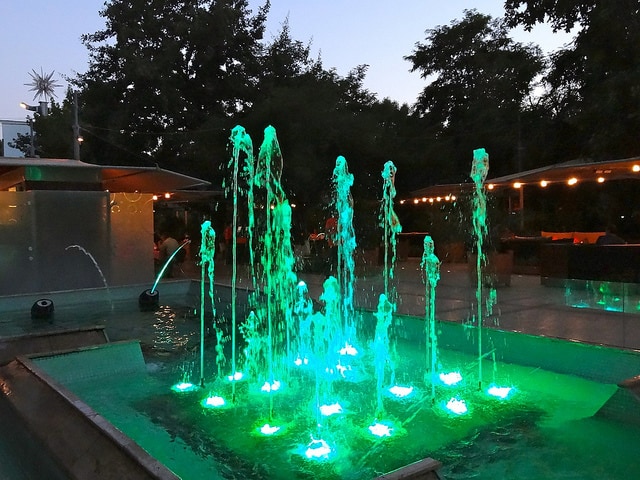 And finally, just a wee bit about Armenian food…

As you know, food is not my forte, despite having attended a cooking course or two. Suffice it to say, Armenian food – and wine – is delicious and inexpensive. 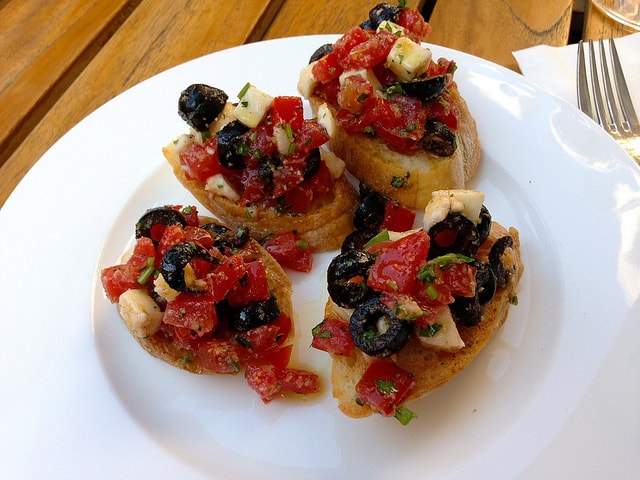 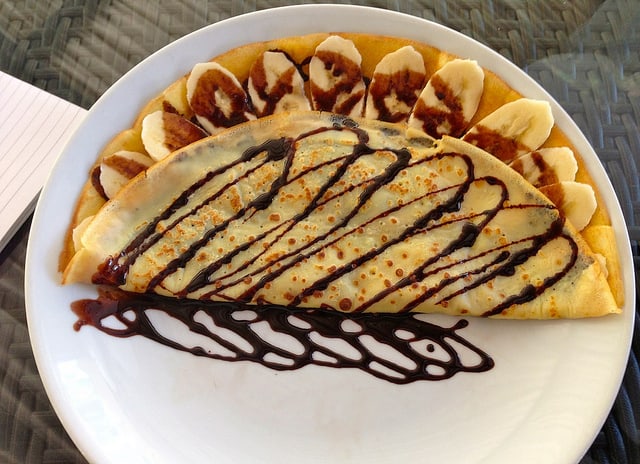 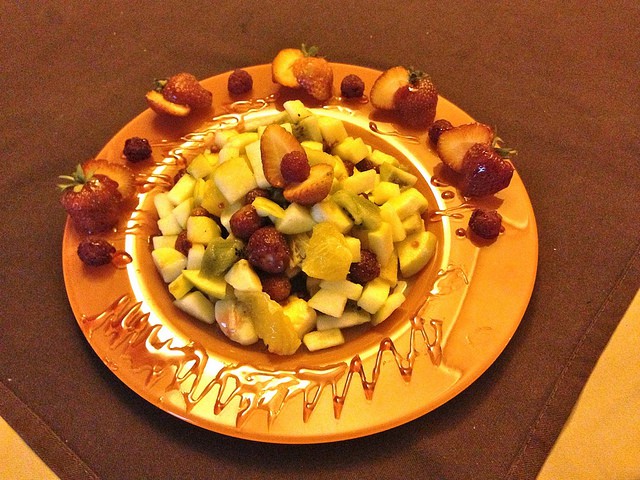 Have you been in Yerevan? Curious about the Caucasus?

4 years later, in July 2017, I returned to Yerevan, this time with friends. I still found it to be a delightful city, and one I could come back to again. On that last visit, we took a tour of Soviet Armenia, a very worthwhile half-day, learning about Soviet times in this city in a fun way. Recommended. And we decided some of those sculptures on Kaskad were simply meant to be used interactively. 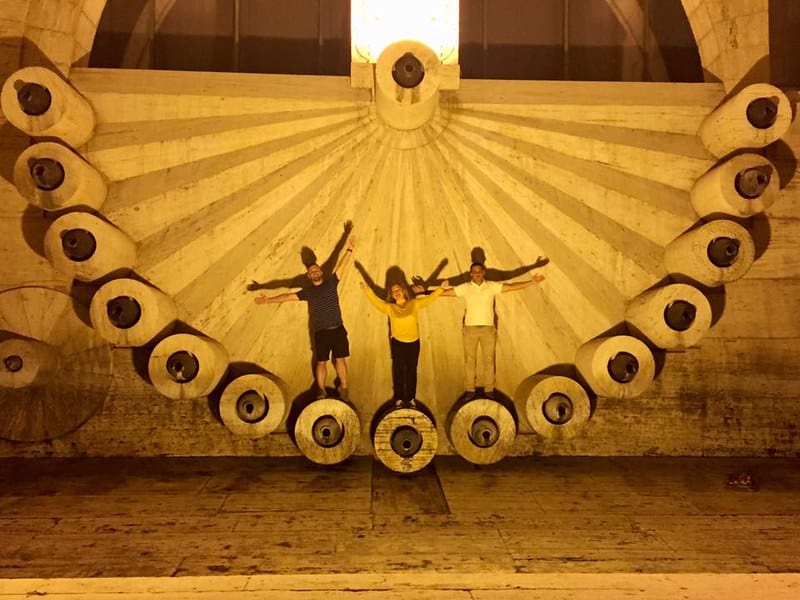