The Garden Kingdom of Dessau-Wörlitz (Day out Berlin) 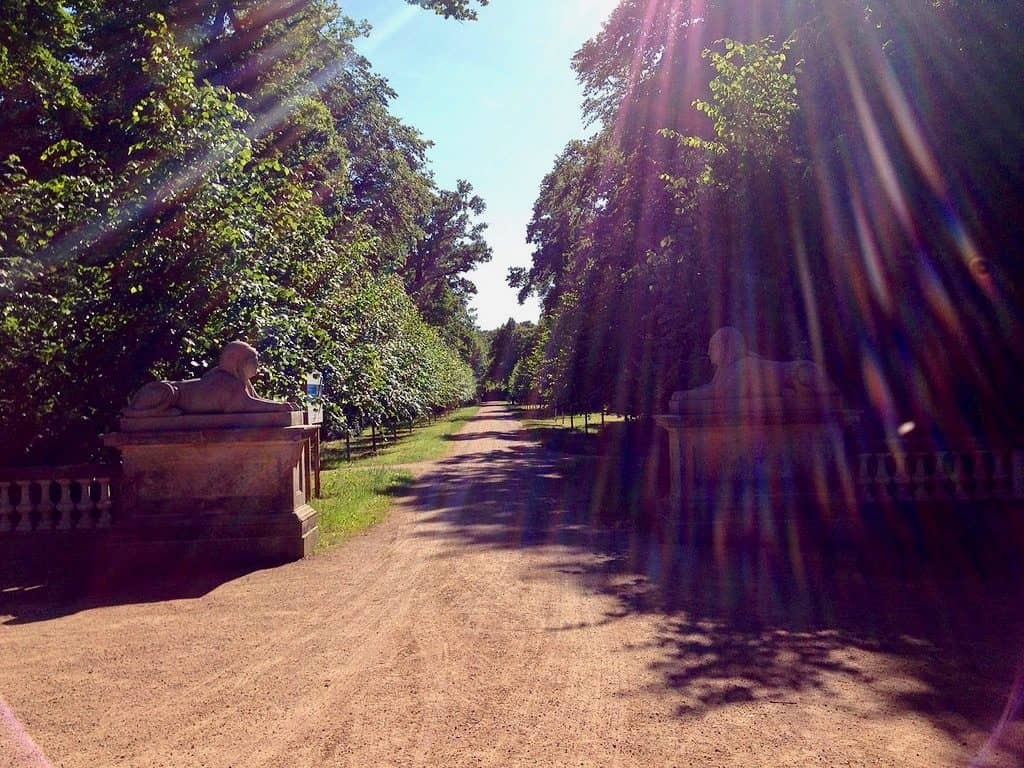 It’s a warm afternoon in June. I’m walking along a narrow path in a park in the town of Dessau. In the state of Saxony-Anhalt, once part of the now defunct country DDR, the German Democratic Republic, better known as East Germany.

This is not just any park, though. This is Georgium, an 18th century English landscaped garden, with a palace, various neoclassical buildings, an educational zoo, statues. Here and there I stumble across a little folly, a pavilion or an 18th century version of a Roman temple. Wouldn’t expect anything less in a garden commissioned by a prince, specifically Prince Leopold III Friedrich Franz of Anhalt-Dessau.

On this fine Monday, I have the path all to myself for quite some time, until I come to a glen where three kids are playing football, and a dog is running around. That’s it: 1 dog, 3 kids, 1 football, and yours truly.

I carry on for quite some time yet again. Kids and dog are no longer in sight, or even within earshot. It’s just me, myself and I. For a very long while. Were they perhaps merely a figment of my imagination? Have I in fact somehow entered the twilight zone?

Ah no! Here’s another human! Phew!

This human is guarding two stone lions and an edifice with a golden dome, the Mausoleum of Herzog von Anhalt, it turns out. The dukes of Anhalt. The guard jokes she probably won’t have a grave like that. And it is quite impressive for a grave: 46 m long, 38 m wide and 43 m high, with the dome diameter a mighty 14 m. I suspect I won’t have a grave quite like this either. Anne-Sophie wouldn’t be enough. I would probably need at least two more names for that. And a number.

But not all fun and games for the dukes either, at least not in death. Remember I said this used to be within the borders of DDR? Well, aristocracy wasn’t exactly revered in communist East Germany. One night in 1958, in a so-called Nacht-und-Nebel-Aktion, their coffins were removed and the bones dumped in a mass grave. 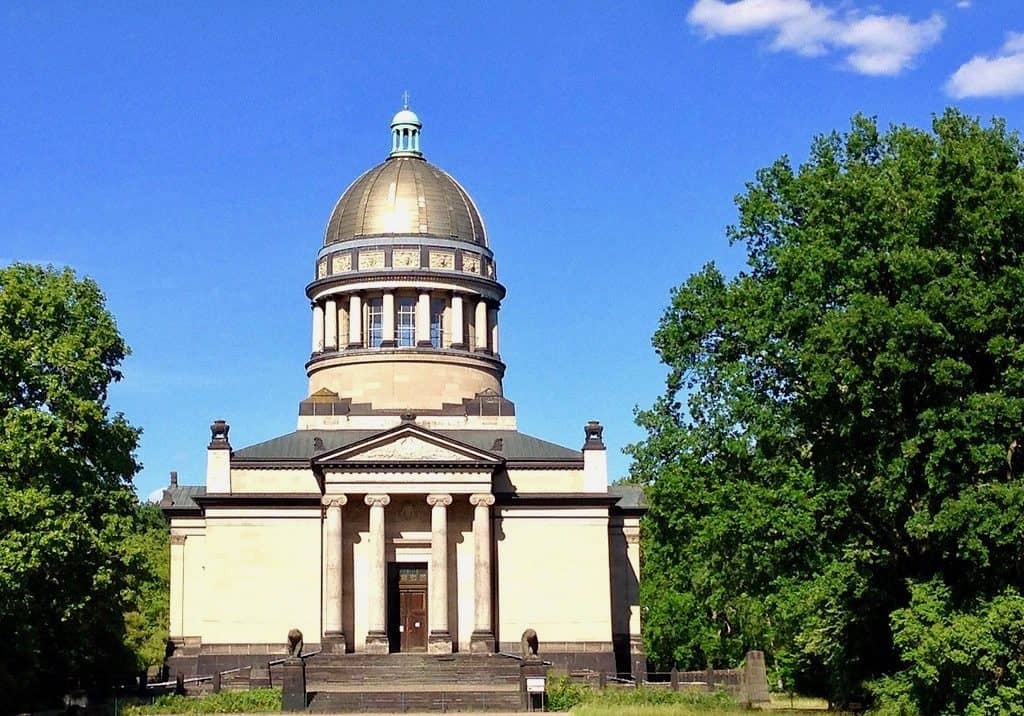 Next, I pass the princely palace – or small classicist country house, as the website calls it, home to an art gallery, the Anhaltische Gemäldegalerie. I don’t go inside, as this Greek god leaning casually on a plinth is enough art for me for one day. 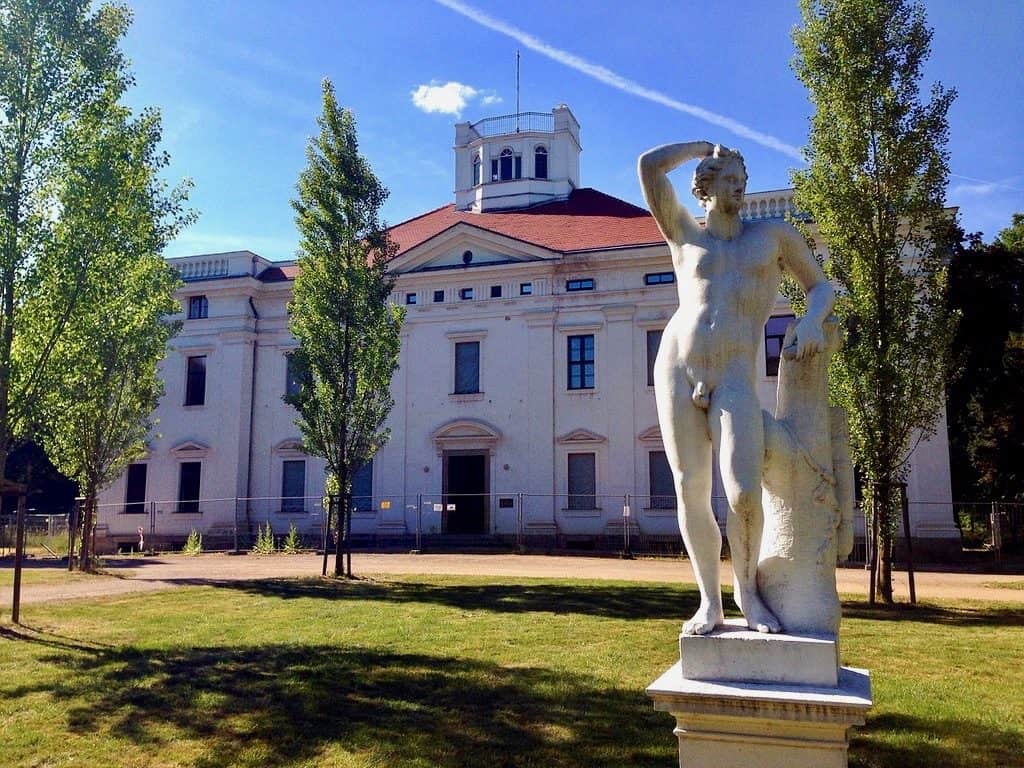 Hm… maybe not so casually leaning. Bit of a poser, actually.

The Garden Kingdom of Dessau-Wörlitz is a series of gardens, spread out over about 25km. In addition to the Georgium, you’ll find the Muskigau and the Luisium here in Dessau. Wörlitz Park, Kühnauer Park, and Oranienbaum are a bit out of town, and there are several little ornaments along the way as well.

According to the inscription:

The Garden Kingdom of Dessau-Wörlitz is an exceptional example of landscape design and planning of the Age of the Enlightenment, the 18th century. Its diverse components – outstanding buildings, landscaped parks and gardens in the English style, and subtly modified expanses of agricultural land – serve aesthetic, educational, and economic purposes in an exemplary manner. 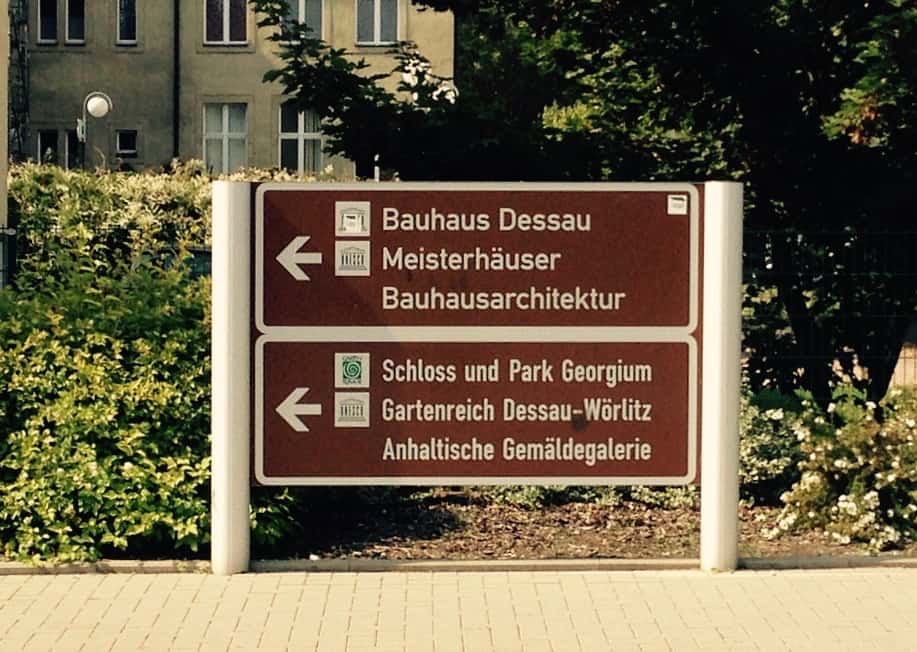 Dessau is also home of the Bauhaus Meisterhäuser! That’s two world heritage sites, not bad for a town of 80 000 residents. And two very different ones at that; neoclassical gardens and modern architecture.

Unless you have a particular interest in gardens and parks, you may be content with seeing just one or two of the six. If so, you can see both of Dessau’s world heritage sites in one day; it’s a nice daytrip from Berlin. As usual, I’m a poor planner. (I will learn one of these days. I will.) And even though I must have passed right by on the way to the Meisterhäuser – and despite this very visible sign near the railway station – I completely missed the delightful Georgium on my first visit in Dessau. Which meant another daytrip the following year. How’s that for dedication…