Vilnius and the KGB

In Vilnius, the thought-provoking and disturbing Museum of Genocide Victims – often referred to as the KGB Museum – left me breathless. And not in a good way. But make no mistake about it. This is from our recent past, and should be, needs to be, experienced. 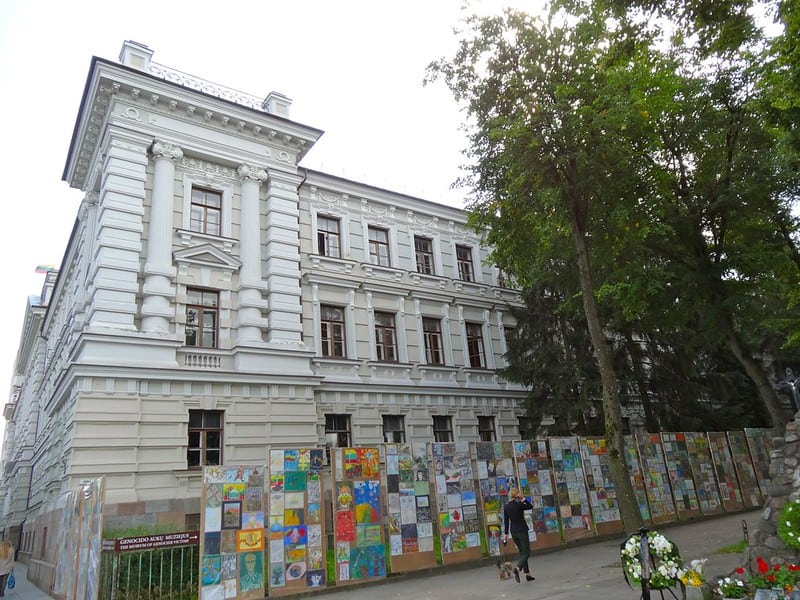 Housed in the former KGB headquarters, a grand building along Gediminas Avenue, Vilnius’ main street, this museum comprises former KGB offices, exhibits from the Nazi occupation and holocaust years, the equally ruthless forces of Stalin and the Soviet dictatorship, and – most chillingly, the KGB prison cells and execution chamber. Cameras are not allowed inside the museum, so I’ll try my best to describe it for you.

Imagine walking in through this door, knowing you have little or no chance of ever walking back out: 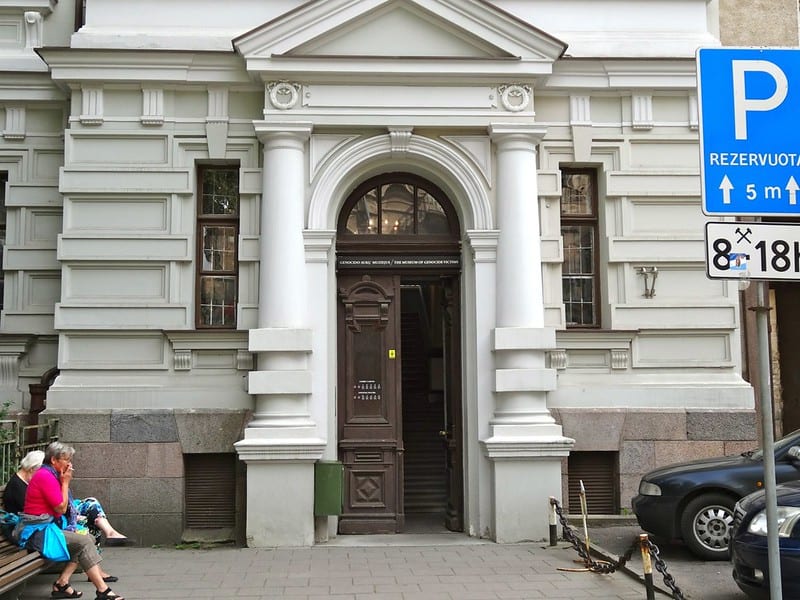 In 1991, a mere 23 years ago, the KGB left the building. Yet everything remains much the same. As I stand there I reflect on a visit to Dachau about 23 years ago. While I was walking through that concentration camp learning about the horrors taking place there in the 1940s, another horror was taking place inside these walls here in Vilnius. And as I’m standing here today, similar horrors are no doubt taking place in other parts of the world. Time seems surreal, circular, nightmarish.

Entering, my eyes are immediately drawn to a door opening onto worn stone stairs leading down into the basement, to the prison cells. But the stairs have to wait, like a macabre dessert. This museum is meant to be experienced in order. At least, that’s what the guards let me know in no uncertain terms.

Beginning with the beginning, we’re in Lithuania of the late 1930s: Stalin’s deportations, followed by Gestapo’s atrocities in 1942 – 1944, the years of Nazi occupation: there’s the Vilnius ghetto, sites of mass executions, all shown through photographs, documents.

After the Nazis have wreaked havoc on this tiny country for three years, the Soviet army returns in 1944. Lithuanians form partisan units and a war for independence lasts for nine years. Daily life of the freedom fighters (no doubt deemed terrorists by Moscow) is documented: magazines, papers, personal items, more photographs. I learn about the various methods of repression, about Soviet shock troops. This wasn’t exactly a war between equal parts.

Lithuanians were sent to prisons and labour camps: more papers, photos, clothes, shoes, prayer books, all documenting living conditions for political prisoners. Techniques and procedures for implementing mass deportations to gulags in the most remote corners of the huge Soviet Union is next: films and more photographs. There’s so much. What sticks in my mind is a photo collage of dissidents executed, propped up against a wall with holes in their heads.

The rooms are worn, with a lingering scent of 1990s Eastern Europe; a peculiar mishmash of sweat, dark tobacco, rough soap, cabbage, sour beer, and low-octane petrol. Leningrad, Budapest, Bratislava, East Berlin, Warsaw; this particular smell remains my strongest memory, common to every Eastern European city I visited back then. Today, I can’t differentiate east from west through my nose. That old peculiar scent is mostly gone. Except here. In the KGB museum in Vilnius it resurfaces.

Spying on the citizens

The eavesdropping room is evocative, with a constant disruptive noise of old radio equipment and blurred rendering of speech. I can’t imagine what an 8-hour workday in this room would feel like. The crackling noise alone is enough to drive me mad after just a few minutes.

Next door, TV-screens show a room down the hall where I haven’t yet been. Early CCTV, on a large scale. The two visitors in the other room are obviously unaware of the cameras. Watching them feels very uncomfortable. I’m an involuntary voyeur.

Entering that room a minute later, I immediately search for the camera. There it is, above the door – a microphone shaped as the silencer of a gun, pointing straight at me. I wave, indicating to whomever might be in the other room I know I’m being watched. Perhaps I shouldn’t have.

The prison is down the narrow, cracked stone steps. I can easily imagine prisoners being forcefully dragged down these steps. Were they? It’s not unlikely.

At the bottom of the stairs are two holding cells – about 1 square metre each, with a narrow ledge along one wall, and a light above the door. That is all.

Next is the room where prisoners were stripped of belts and anything else that might be of use. The room is empty, save for a table bolted into the wall. All along the corridors are cells – all green, institution green. Some are solitary confinement cells. Others are even crueler: in the middle of the room is a tiny platform, just big enough for your feet. Cold water covered the floor. As a prisoner, you had a choice: either balance on the platform – or stand in the freezing water. In winter, ice was used.

A sign points to a small courtyard. I walk out. Across the courtyard is the execution chamber.

Inside, a film is shown on a small screen, detailing the procedure: two guards drag a man in. Once inside the room, a third officer shoots him in the back of the head. The dead prisoner topples over. His corpse is then dragged from the room, and a bucket of water is poured on to the floor to clear away the blood. The process is then repeated with the next prisoner. Efficiently. Mercilessly.

On this day, the Museum of Genocide Victims is a quiet place. Visitors keep their voices down. The mood is sombre, serious, reflective. The smell isn’t the only thing retained in these walls. On a strangely metaphysical plane, fear seems to linger here as well. And coldness.

I don’t leave immediately. I’m dizzy and a bit nauseous, yet I feel compelled to remain, just a little bit longer. Can’t put my finger on what’s keeping me here. Have I still not seen – or understood – everything? I walk into a cell, an ‘ordinary’ cell, and look out through the barred window. Outside, I see cars whizzing by, people hurrying past. I hear a group of teenagers chatting and laughing.

When I finally go out through the same door, I can hardly breathe. The outside is a welcome respite, even the traffic on busy Gediminas Avenue, the traffic that annoyed me an hour or two ago.

I walk over to the same window I just looked out of – now on the outside looking in. 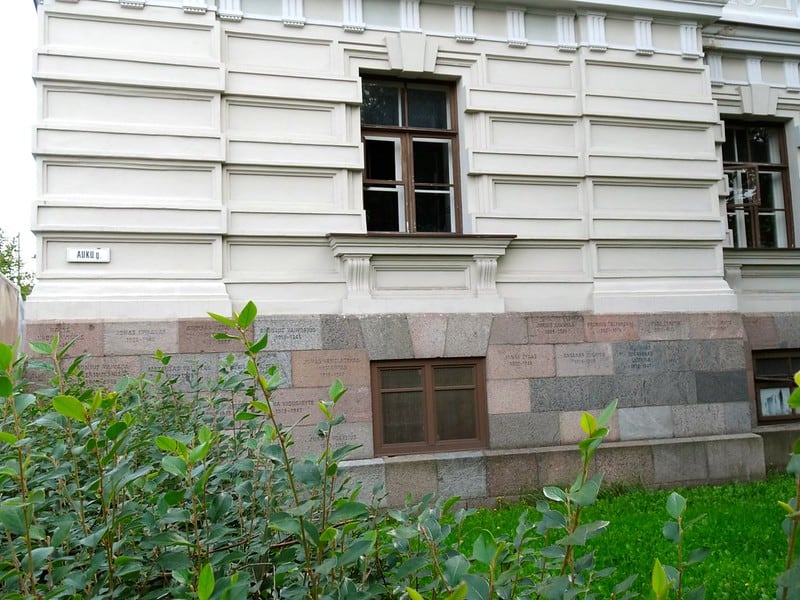 Victims are remembered on the walls. 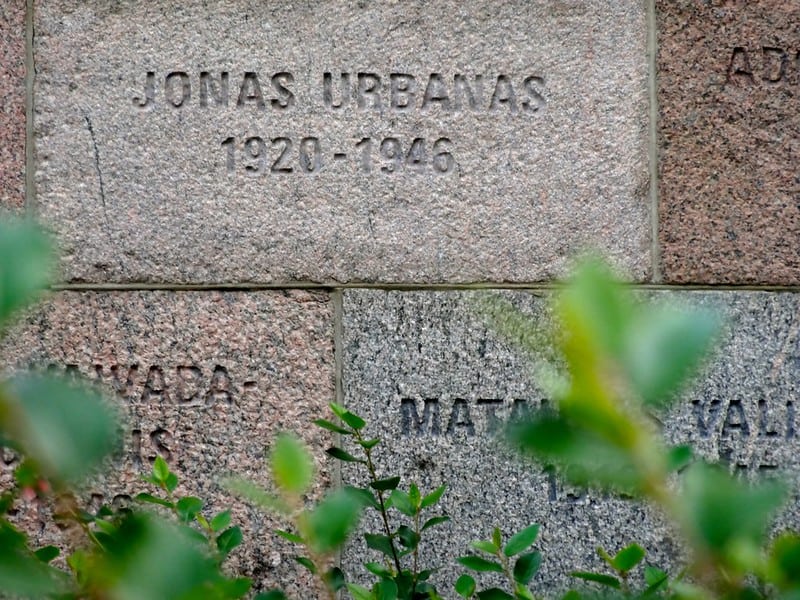 The monument to Soviet occupation victims is still there… 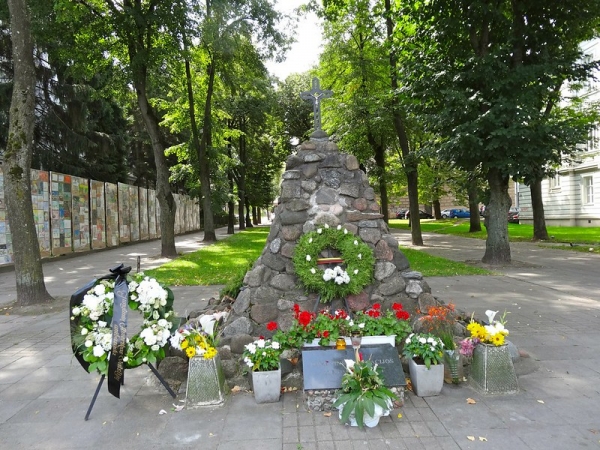 …the children’s drawings, too. 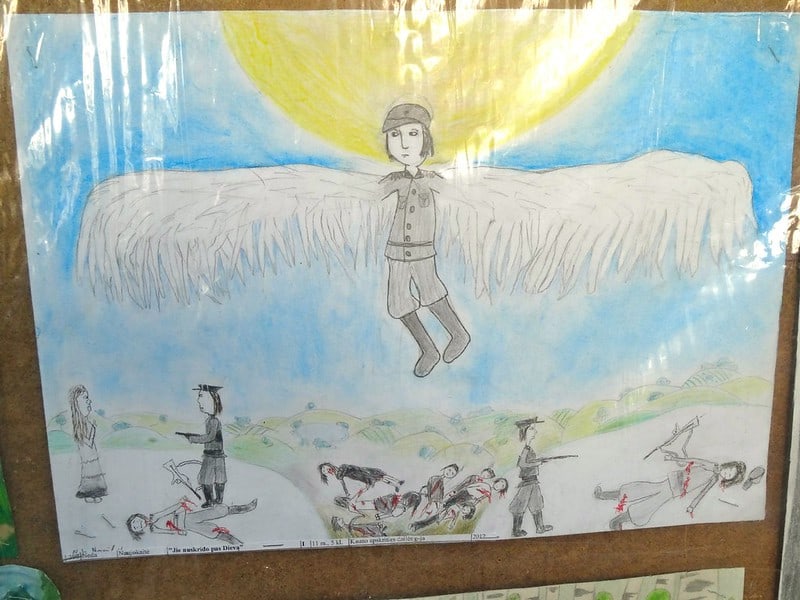 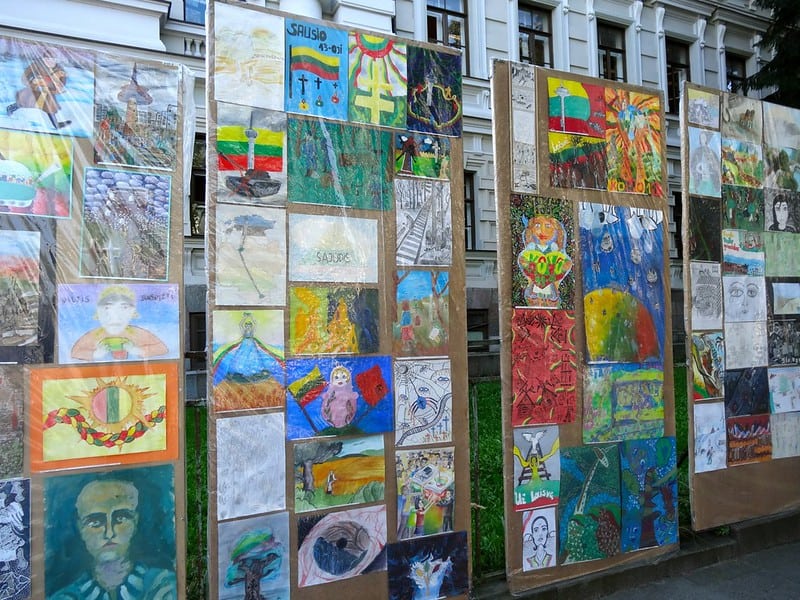 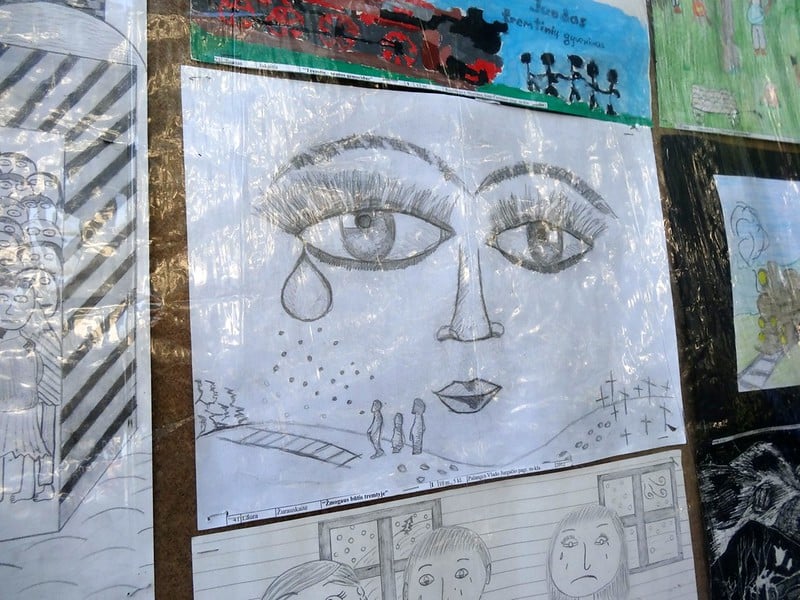 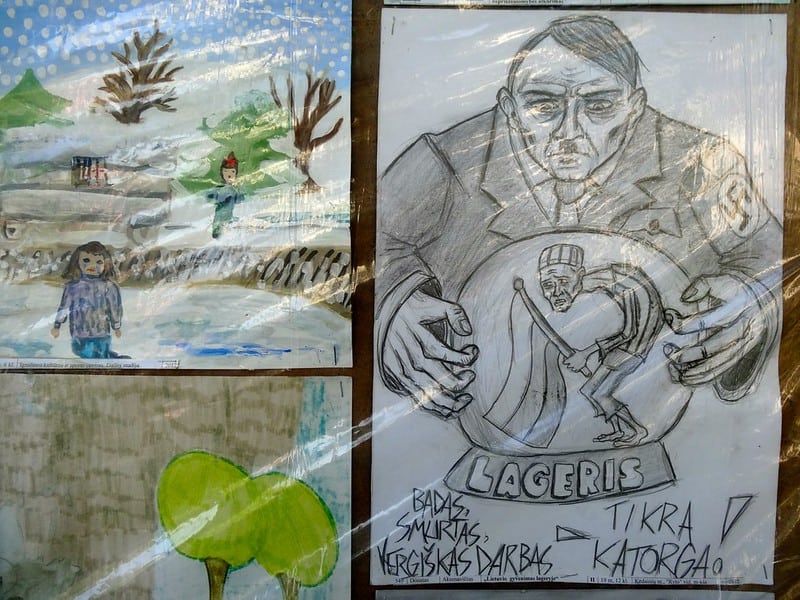 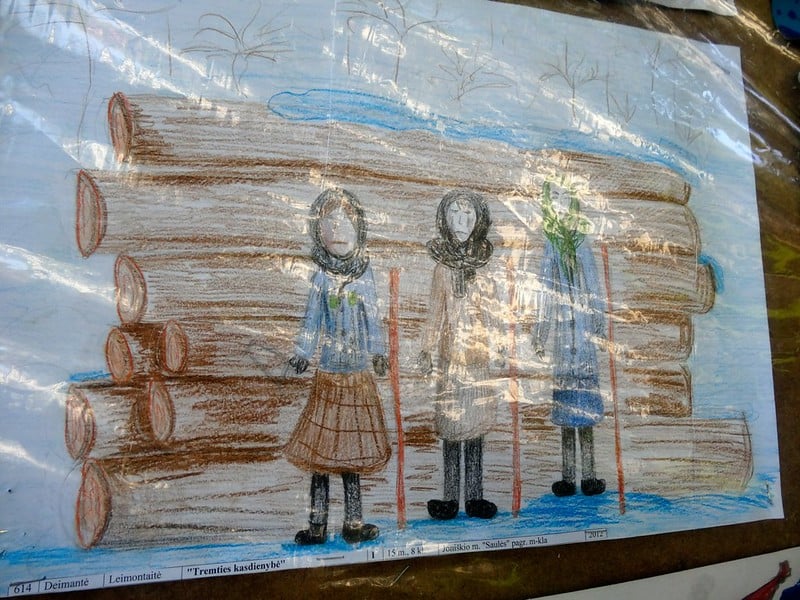 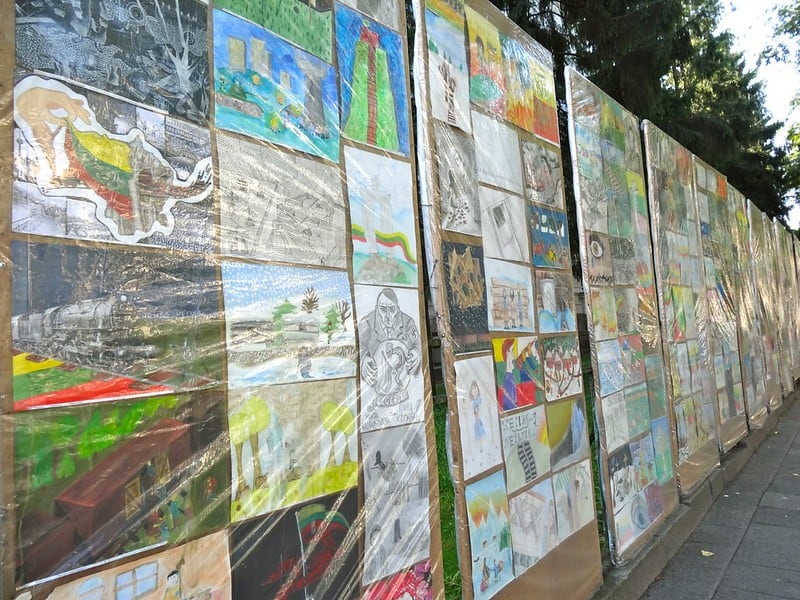 Only… all of that looks different now. As if I’m seeing it from deeper within.

Visiting the KGB Museum in Vilnius was a horrific, yet necessary experience. The way of superficiality is all too easy to take.