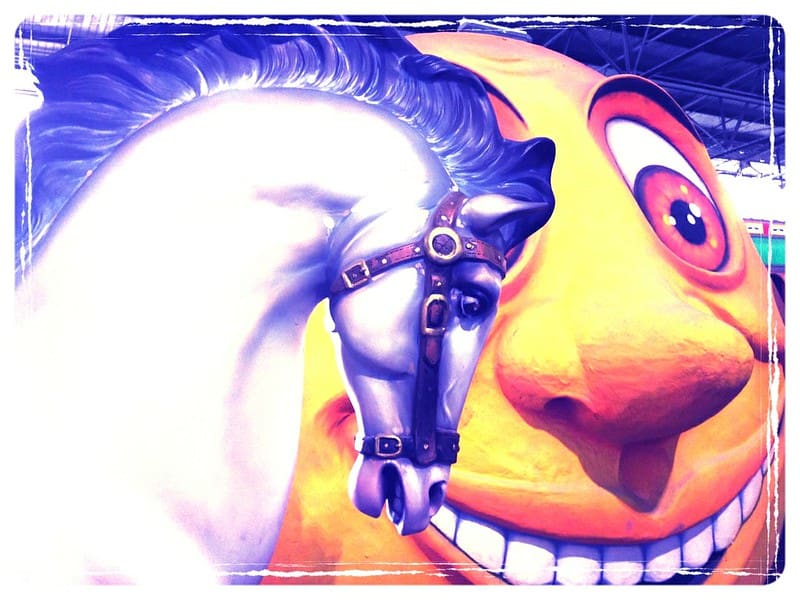 Have you ever wanted to experience Mardi Gras? Me, too. As it happened, however, life (i.e. other travel plans) meant we would be in New Orleans 10 days too late.

As with most things in Louisiana, Mardi Gras came with the French settlers. Records from as far back as the early 1700s describe masked balls and parades in New Orleans. In 1806, the party had become so raucous that the powers that be decided to lay down the law. This was of course ignored – you’re not going to stop having fun just because it’s illegal, are you… A few years later, the authorities saw the error of their ways and lifted the ban. However, to ensure the parties didn’t go on all year long, a law was passed limiting the season to the period between 1 January and Fat Tuesday (Mardi Gras).

And so it remains today: the carnival season begins on the Twelfth Night of Christmas (6 January, Epiphany), and through the weeks that follow, there are processions, masquerades and king cake parties. Then, as a final blast of frivolity before Lent, everything culminates with a no holds barred celebration on Fat Tuesday.

The celebrations are organised by krewes, a whopping 54 of them. In some krewes, the members decorate their own floats, but the vast majority leave it in the capable hands of Blaine Kern Studios, Mardi Gras float designers and -builders since 1947. Their Mardi Gras World is one of 18 warehouses containing well, everything Mardi Gras. 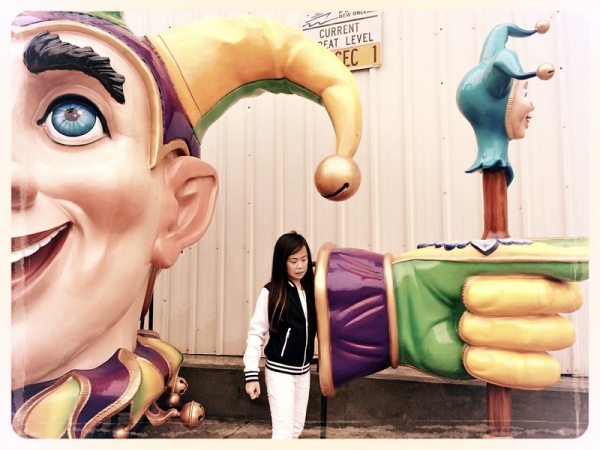 While we couldn’t join in the fabulous festivities, we could still get a taste of this classic New Orleans tradition. Let’s take a behind-the-scenes look at where the magic happens: welcome to the float den at Mardi Gras World.

As we slowly make our way through, preparations for next year’s Mardi Gras season is in full swing. The giant warehouse is brimming with floats, sculptures, props, masks, costumes – from the bizarre to the beautiful. There’s the clang of workmen’s tools, the smell of the artists’ paint, and most of all the colours: every imaginable shade, every nuance on the colour spectrum is represented. 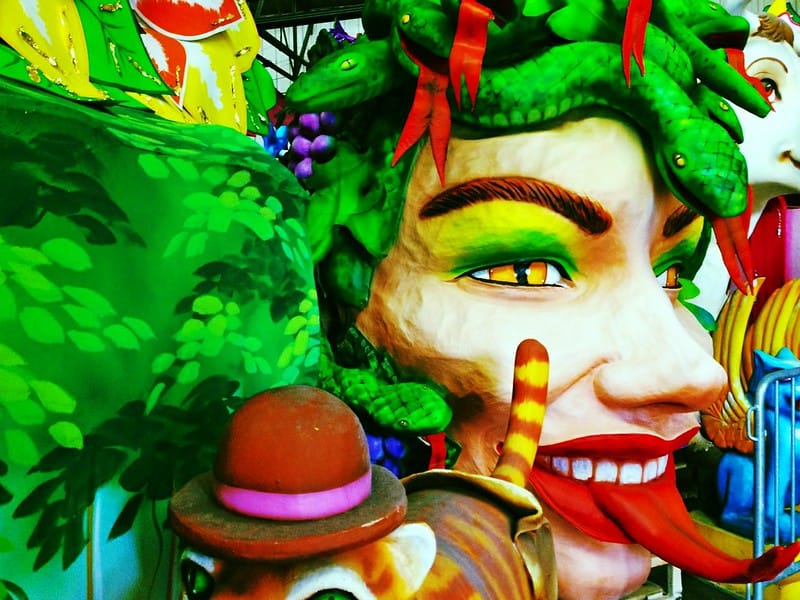 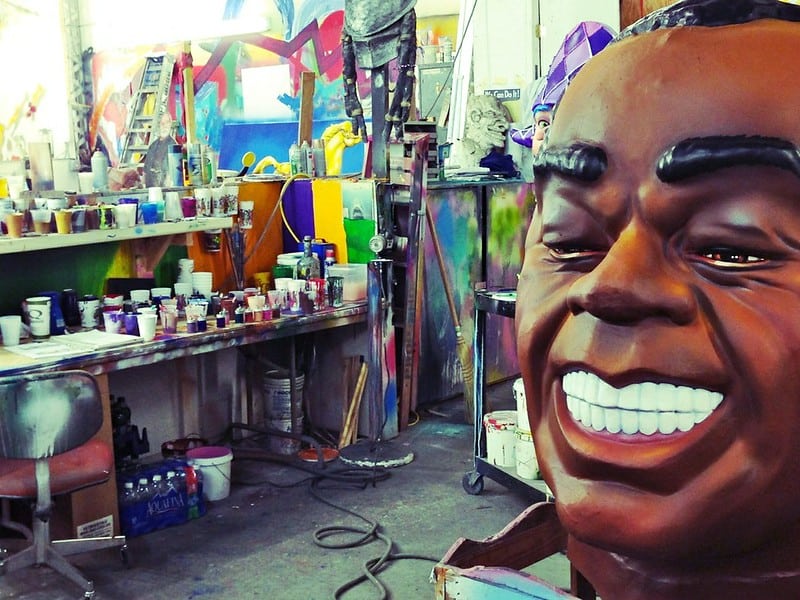 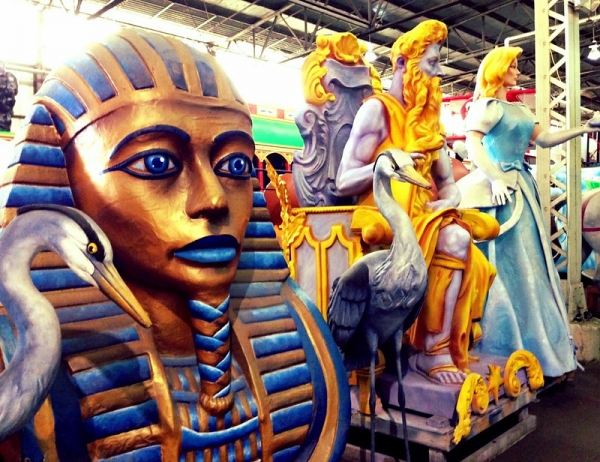 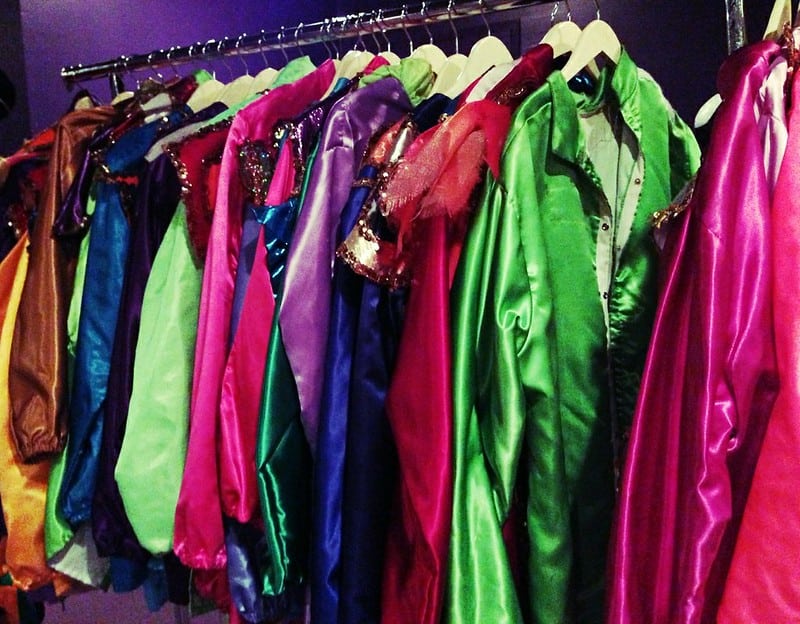 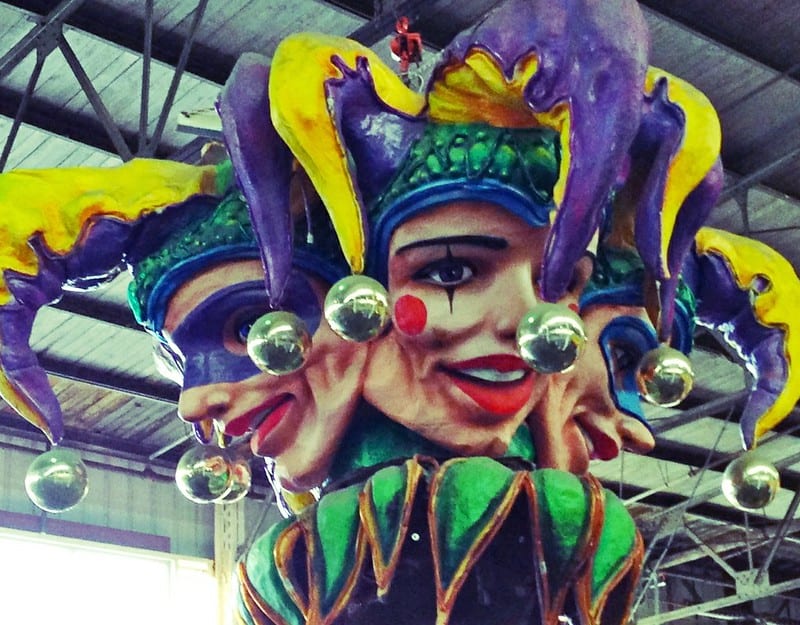 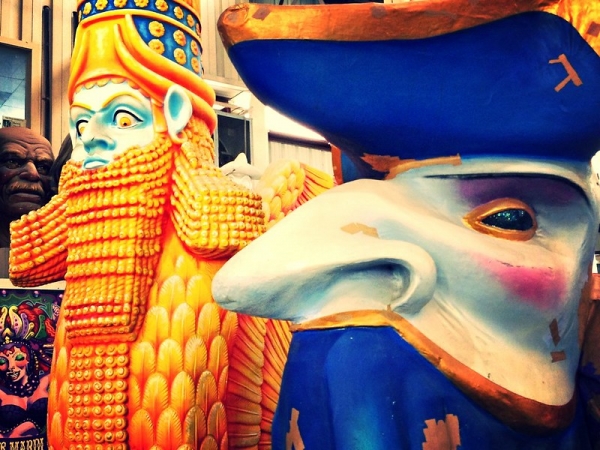 Mardi Gras World offers a short film on the history of the carnival, the opportunity to dress up, and a tour of the large warehouse where the magic happens. And, there’s king cake. 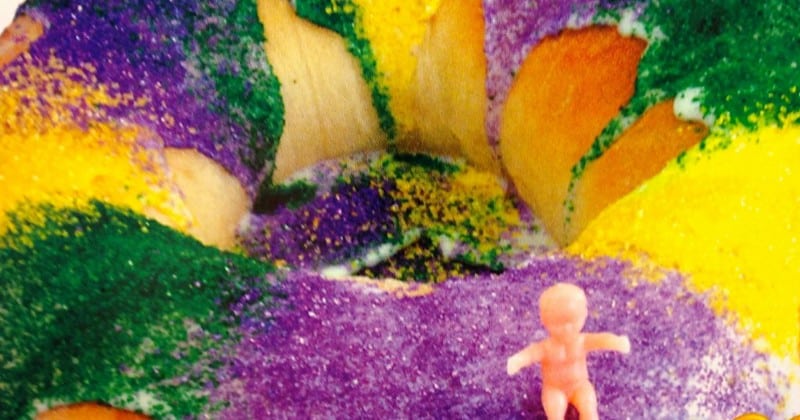 Sometimes, when I’ve been in Paris in the beginning of January, I’ve bought a galette des rois to take home and serve to friends and family. This is an old, religious tradition, associated with Epiphany. The Parisian version contains a figurine hidden inside the cake; whomever gets the trinket is king for a day and must, according to custom, buy the next galette.

In New Orleans, the king cake tradition harks back to the 1870s. Iced with the colours of Mardi Gras: green, purple and gold, the hidden figurine inside is a tiny plastic baby, representing baby Jesus. If you get the baby, be prepared to throw the next king cake party. The taste? Well, with all that icing it’s a sweet affair. Surprisingly, though, Cat, my 11-year-old who prefers dried fish snacks to sweets, took a liking to king cake, and kept looking for it on restaurant menus.

If you can’t make it to New Orleans for Mardi Gras, set aside a couple of hours to browse Mardi Gras World; it’s a fun and family-friendly experience in the Big Easy. 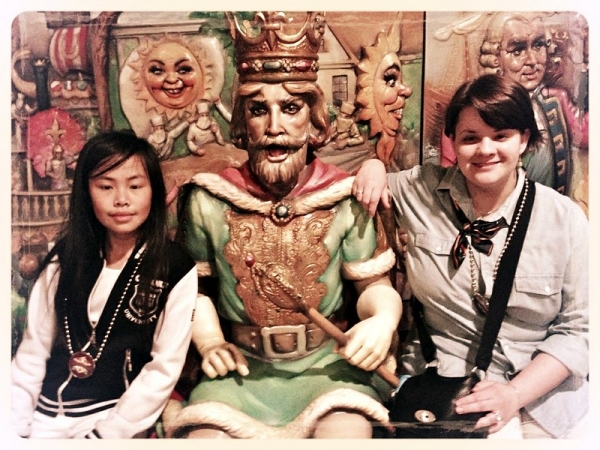 The dates changes annually, depending on the dates of Easter – which, as I’m sure you all know – is the first Sunday after the first full moon after the spring equinox. Next year, Fat Tuesday (also known as Shrove Tuesday) falls on 4 March and in 2015 it’s on 17 February.

Don’t let anyone fool you into buying a ticket for Mardi Gras. It’s simply a street festival, completely free of charge. Neither is there any official Mardi Gras-souvenirs for sale. No one organisation is an official sponsor of the festivities. 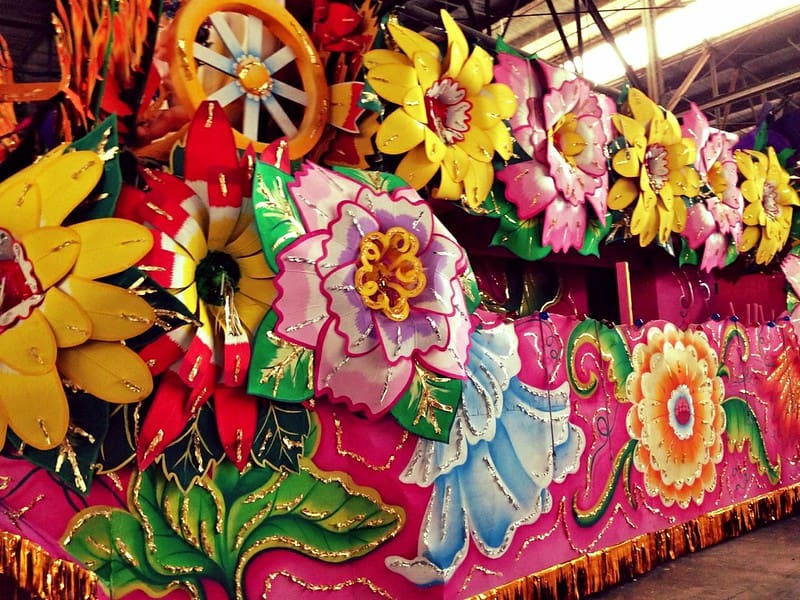 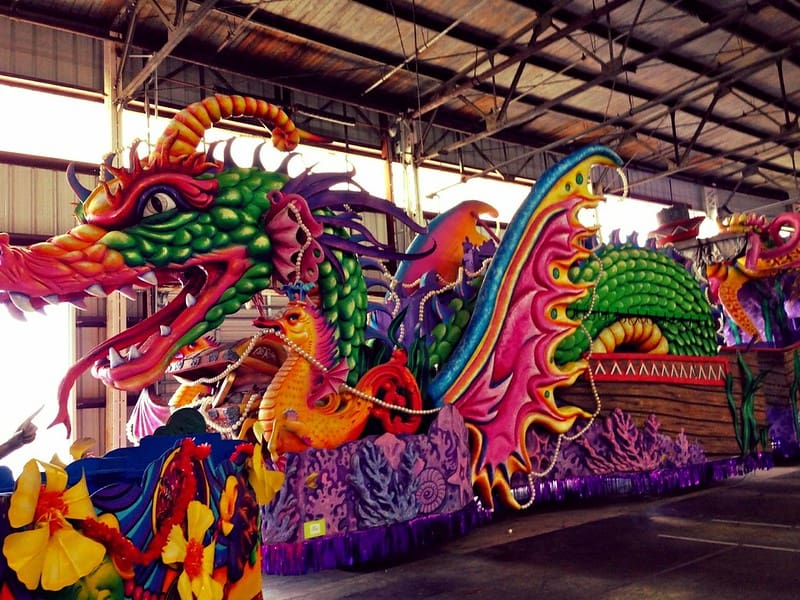 Disclosure: In New Orleans, we were guests of New Orleans CVB. As ever, we’re free to write about anything we want.