World at a Glance: Frank Zappa in Vilnius 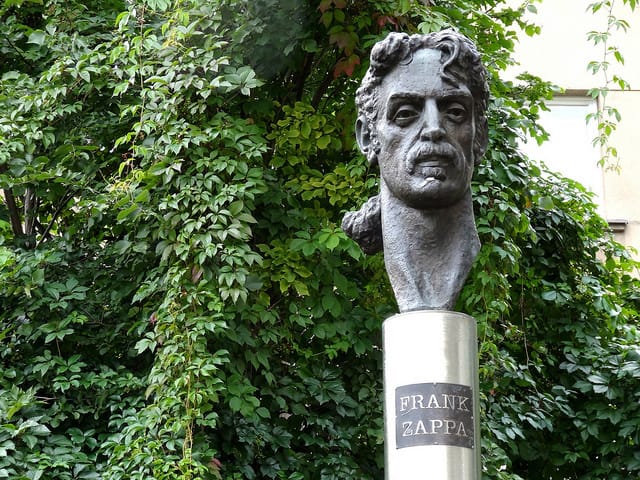 Welcome to World at a Glance, yet another infrequent series here on Sophie’s World. These are intended to be short posts, with a photo that is either curious or evocative, that gave me pause; pause to think, laugh, cry, wonder… Let’s begin with curious.

What is Frank Zappa doing in Vilnius? What is the connection? The unconventional singer died in 1993, just a few years after the break-up of the Soviet Union and Lithuanian independence. Had he managed to visit this tiny country towards the end of his life? Was his family from Lithuania?

Turns out Frank Zappa had no association at all with this little Baltic country – apart from an enthusiastic fan. And a desire to replace Soviet icons with, well, something else.

After the dissolution of the Soviet Union, Lithuania, like other countries in the region, couldn’t be rid of Soviet symbols quick enough. Down they went, statues of Lenin, Stalin, Karl Marx and others, leaving heaps of empty pedestals. But what to replace Lenin with? Something to mark the end of communism, obviously.

Enter Saulius Paukstys, a civil servant, photographer and founder of the Frank Zappa Fan Club. Amazingly, he managed to convince city authorities to erect a statue of the dead singer in the centre of Vilnius. In 1995, the statue was unveiled to the tune of a Zappa hit parade by brass band.

I love stumbling over curious little quirks like this. You?