The stairs of Girona (Day out Barcelona)

TBEX Europe is coming up (that’s a travel blogger conference, for non-blogging readers). This year, it’s organised in Girona,

Sound familiar? No? Well, until six years ago, I had never heard of this city either. Even though it’s the capital of the Costa Brava, Europe’s oldest beach resort, I knew nothing of its existence.

But then I stumbled upon it, quite literally. I’ve looked through photos, and dug out an article I wrote for Boots’n’all. Here it is, slightly reworked and shortened. 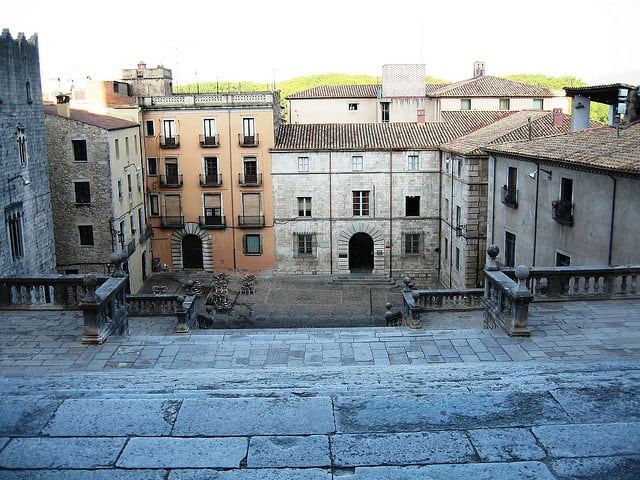 Having just visited Carcassonne for a writing assignment, I’m on a Barcelona-bound train for a flight home the next day, not looking forward to it. Nothing against Barcelona, you understand – but it’s around 11pm, and I’m not in the mood to wander about a very big city trying to find a bed for the night.

When the train stops briefly in a place called Girona, I look out – and hop off on an impulse.

Not all my impulsive decisions are great. Far from it.

But this one is. 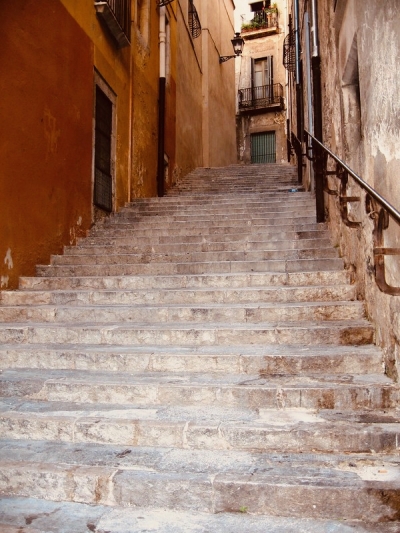 An info board outside the railway station shows Girona has a medieval old town, Barri Vell. Easy decision which way to go then. On the way, the pleasantly bustling La Rambla tempts with life and laughter from numerous outdoor cafes.

Asking a random passer-by, I’m told I have a choice. Go to the right for a hostel – or to the left for a choice of up-market hotels. It’s midnight. My legs go to the left. All by themselves.

At Hotel Historic, I ask for the cheapest option. Turns out to be a huge apartment. Enough to house a large, latin family. Five minutes later, I’m so lonely in that enormous space, I request a change to a simple room. More expensive, but much better.

The shower is huge, with a bewildering array of shower heads and settings. How to use it all? I never work it out, but playing with it amuses me for half an hour or so.

After that, I’m much too tired to go out. Dinner then, is red wine and peanuts from the mini bar. It has happened before.

Sifting through my notes, accompanied by a German dubbed version of South Park on the TV, I barely have time to reflect on this global village – a Norwegian writer in Catalonia, close to the French border, writing in English while watching German-dubbed Spanish television – before I promptly fall asleep.

The next morning, September has arrived. During the early hours, the air is nippy, the sun barely visible over the rooftops. The peal of church bells tempts me towards the imposing Catedral de Girona. 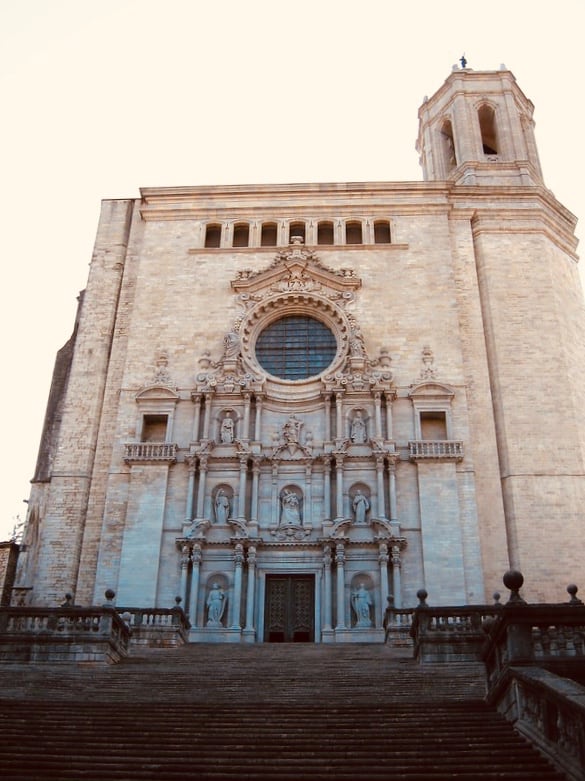 A side door is open, attracting me with its warm light. The sign on the door proclaims access is for religious purposes only. Cultural visits must use another door. Very well, off I go. Only to find the other door locked! 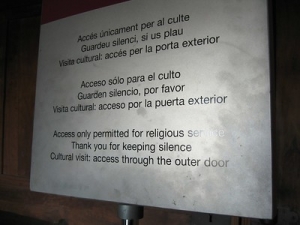 Can my visit be deemed religious? Well, I am awed by the sheer size and physical presence of cathedrals, and decide that’s religious enough.

Peeking in, a vast silent nave of sombre, grey stone meets my eyes; the widest Gothic nave in the world, I learn. Not a soul in sight. Like a rat to the flute of the pied piper, I’m drawn towards the sound of a deep voice chanting in the distance. Crossing the nave, I spot a priest performing some sort of ritual with an elderly couple. Close up, the voice of the priest resonates and seems to come from everywhere, in an eerie echo effect.

Back in the nave, a sign points to the treasury. Displays of Catholic church wealth generally bother me. I decide the least I can do, is not give any attention to treasures that have likely been amassed through violent and criminal means, in complete disregard for human rights.

Back out in the crisp morning air, I meander down the narrow Carrer Bonaventura Carreras i Peralta with the street to myself. I quickly see that Barri Vell deserves more time for exploration than I can give it this morning. Narrow alleys and medieval stairs appear around every corner. And Portal del Collectionista, a wonderful dusty old book shop (hope it’s still there). 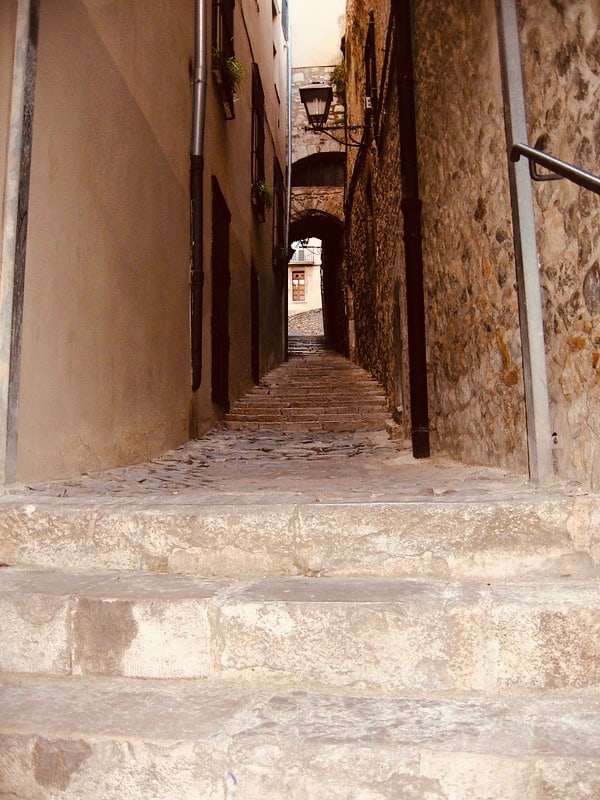 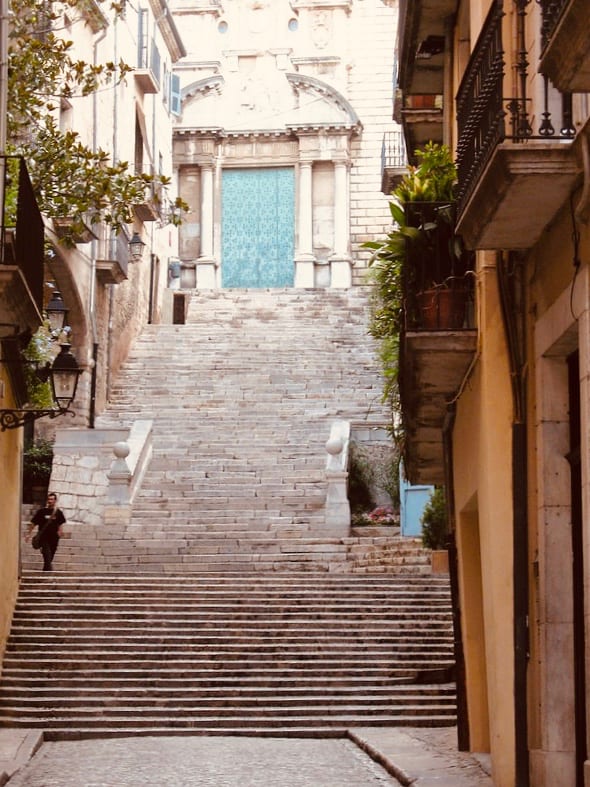 Further along, the hostel Cerveri de Girona has a bright and airy reception area. Much livelier than my chic hotel. I regret not having chosen it last night, both for the price (EUR 15 as opposed to 110) and for computer access.

I adore watching cities wake up. And chocolate spelled with x!

Breakfast is at Xocolateria Antiga, mostly because of the name. It’s a sweet little café. My croissant is sugar-glazed, my orange juice sweetened and the house special – hot chocolate Catalan-style – is strong, thick and, of course, super-sweet. Just to be on the safe side, the Xocolateria provides me with extra sachets of sugar. 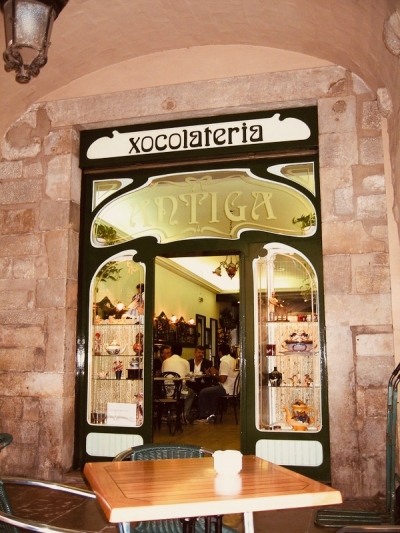 The tables are filling up with people enjoying morning xocolatas. Girona is awakening.

At the next table, three generations of local women dressed in bright colours chat in animated Catalan, hands flying all over the place. Mum and grand-mum puff energetically on long, slim cigarettes. Might have been the set of a Pedro Almodovar drama, this – Women on the verge of a nervous breakdown. Or something. I stare shamelessly, totally enjoying the entertainment.

But – as interesting as this scene is, I have places to go, a flight to catch. It’s time to move on, in search of the railway station and some protein. Few passers-by speak English, but are eager to help all the same, replying in Spanish or Catalan or general body language. It works. Soon I’m on the Barcelona train, writing this. 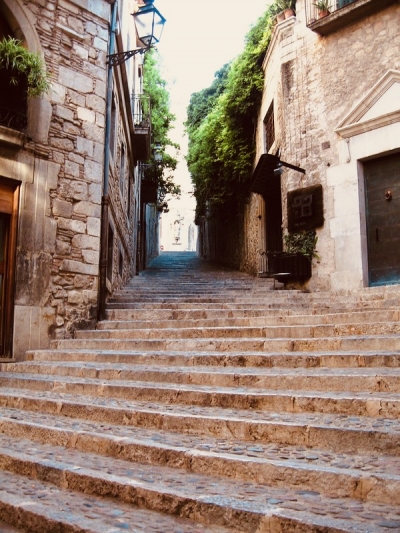 There you have it, folks. Twelve hours in Girona. More or less awake. This town deserves more time for exploration than a late night and a few early morning hours. Looking forward to visiting next month.

Will I see you in Girona?