In Flanders Fields the poppies grow…

“Listen, our guns have stopped.”
“Maybe the war is over. Maybe it’s peace.”
“Oh hurray! The big knobs have got around the table and yanked the iron out of the fire.”

This exchange from the last few minutes of the final episode of Blackadder Goes Forth is what I think about while visiting Flanders Fields on a pleasant August day in 2017. It may seem blasphemous to quote a comedy at such a solemn place, but bear with me.

Captain Blackadder explains that alas, it is not so. They go over the top – cue gunfire, then theme song at slow, melancholic pace as scene slowly changes from killing fields to poppy fields. 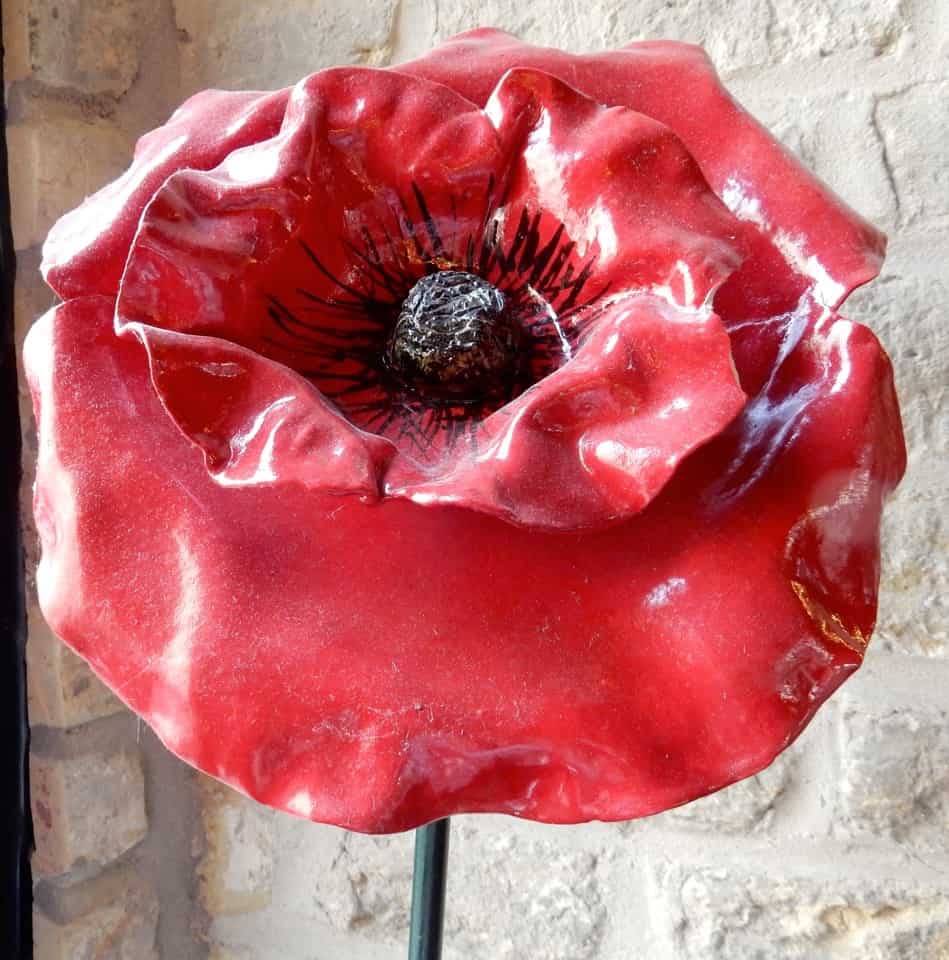 Is that not the saddest line ever?

The Battle of Passchendaele, also known as the 3rd Battle of Ypres, was fought by Allied soldiers on one side and German soldiers on the other. Total loss of men: 450 000. Ground gained: 8 km!

The War to End All Wars

The war to end all wars! Those words quickly became a slogan to explain British participation in World War I.

– We have not sought this reckoning, we have done our utmost to avoid it; but now that it has been forced upon us it is imperative that it should be a thorough reckoning…

Yet again, words teach us nothing.

Visiting Flanders Fields is a moving, atmospheric and evocative experience. I am here to learn. To feel.

I am also lucky. Lucky to be here just now, during the brief window in time when a recently rediscovered dugout is open to the public. Lucky that the three of us – friend and fellow blogger Daniel, our enthusiastic guide Martial, and I – have the dugout entirely to ourselves for several minutes. 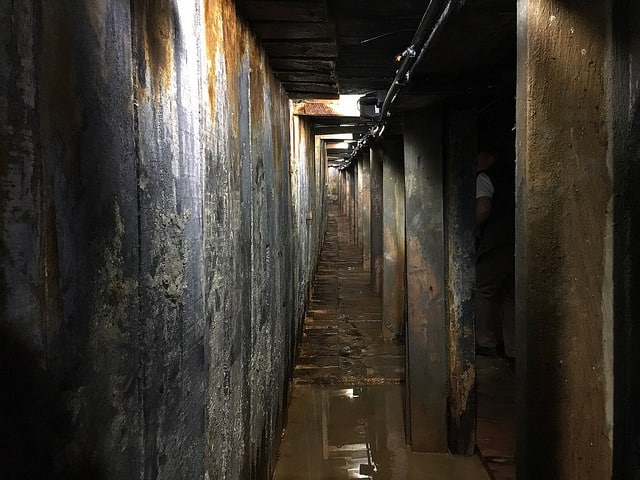 What is a dugout exactly? This is what I glean from the info board here before entering:

From 1917 onward, an increasing number of troops were thrown together in Flanders in an ever more devastated landscape. Suitable accommodations close to the front line was becoming harder to find. Hence, from 1916 on, the British started to build what they called deep dugouts… The soldiers lived like moles. The atmosphere was damp and smelly whereas the corridors were crawling with vermin. Water had to be pumped out continuously because of the amount of groundwater immediately flooding the corridors.

This subterranean Australian dugout opened on 31/7-2017, the centenary of the Battle of Passchendaele, and will close forever on 11/11, 99 years after World War I ended. To the day.

The dugout is left as was, except for extra support beams added to keep it from collapsing. We learn that dugouts were usually at least 10 metres underground. However, this one was built underneath the foundations of Zonnebeke Church which provided good protection against landslides, so it’s only about 6 metres underground.

We walk along the 30-metre corridor, on wet, sandy ground with rust dripping down from leaky pipes above us. We have been warned not to touch the walls, as we might stain our clothes permanently. 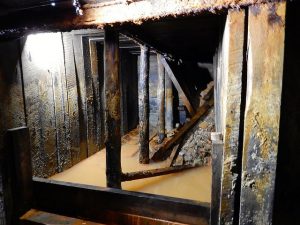 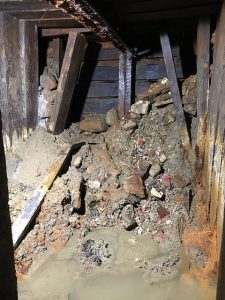 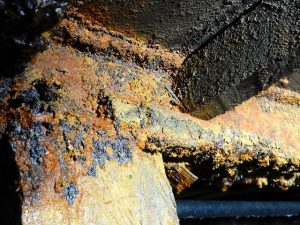 Dugouts were accessed from the trenches and were used for sleeping quarters, workshops, storage and whatever else was needed. Sleep in the bunks had to be taken in turns. The quarters were dirty and often flooded. Lice were prevalent, often causing trench fever. Rats were prevalent, too. They ate the food. They ate you.

It is cold down here. It smells moldy, muggy. Most of all, it is wet. The soldiers were constantly wet. Trench foot is perhaps a lesser-known evil of war: constantly wet boots. Often the foot had to be amputated as a result.

I try to imagine being an 18-year-old boy forced to live here, but I cannot. Not properly. I can hear the irritating sound of dripping water, I can feel the cold, wet walls. I can sense the discomfort, the longing for warmth, in every sense of the word, the desire to be home. But the urgency, the fear – that, I cannot even begin to perceive. 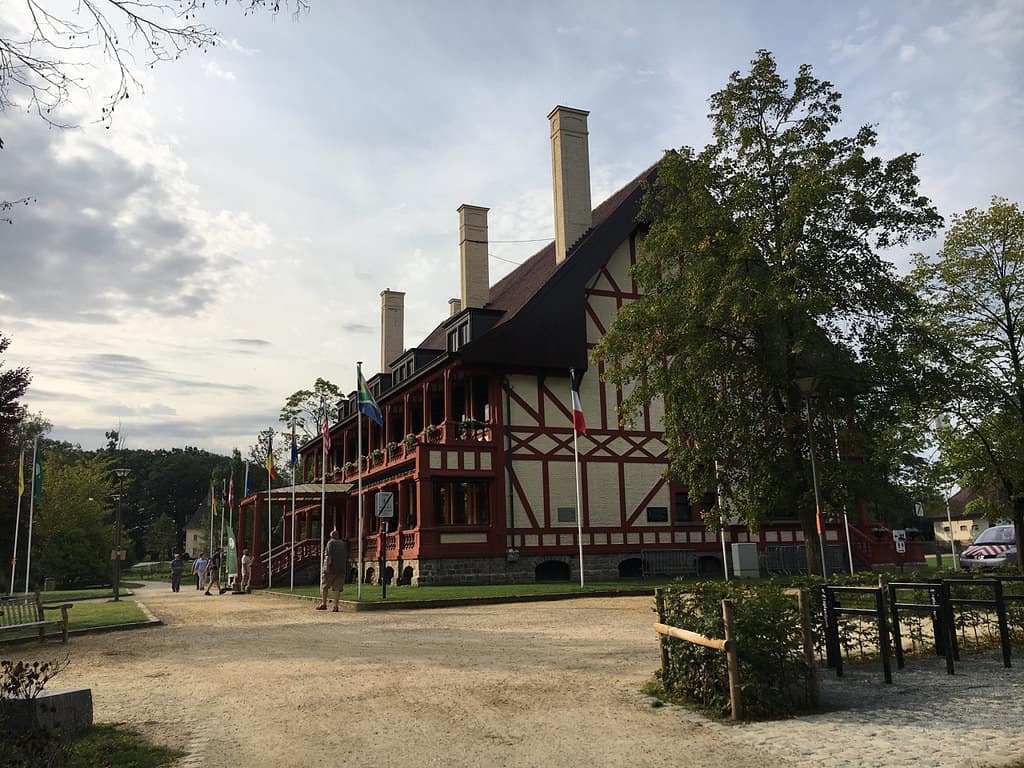 The church and the dugout are just next to Memorial Museum Passchendaele 1917. Housed in the historic Zonnebeke Chateau, the museum covers the battles here on the Western Front. Inside, we see the evolution in uniforms and headgear: British, French, German, including the Prussian Pickelhaube, the spiked helmet made of hardened leather. 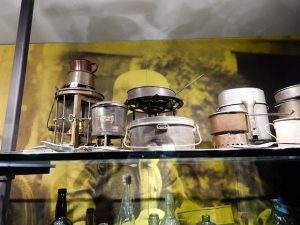 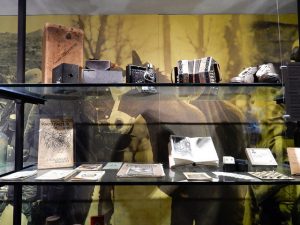 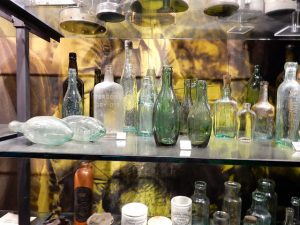 We hear about the role of women, forever changed after World War I. They went to work, not necessarily by choice but by financial necessity: in healthcare, nursing, in charitable organisations, administrative jobs, as postmen, police officers and in the war industry. Some were close to the front, in catering and bars, some in brothels.

Chemical warfare is not a modern day cruel invention. There are Chinese stories as far back as 3000 years. Leonardo da Vinci talked of using poison in war 500 years ago. The Hague Convention prohibited the use of poisoned weapons already in 1907. Despite that, more than 100 000 tonnes of gas were produced during World War I. 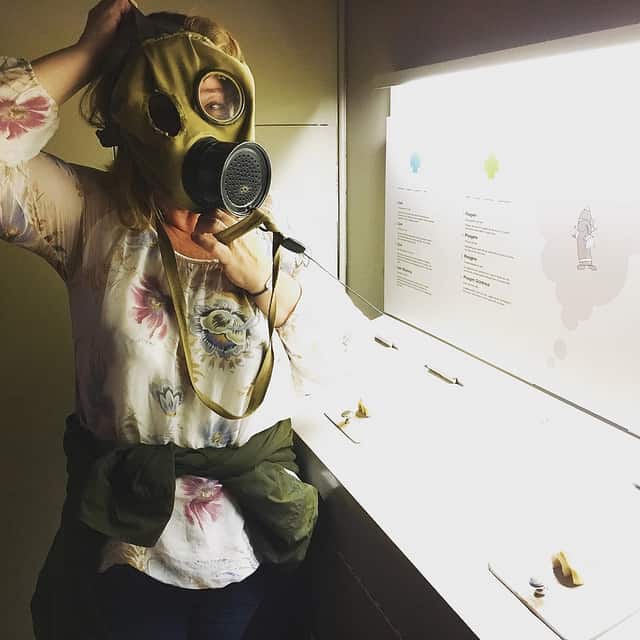 We smell various types of gas used in warfare: chlorine, phosgene, mustard. I can confirm that mustard gas actually smells like mustard. We see the evolution of gas masks, and try on one. It feels a bit claustrophobic. 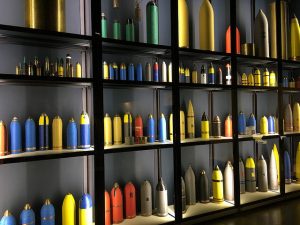 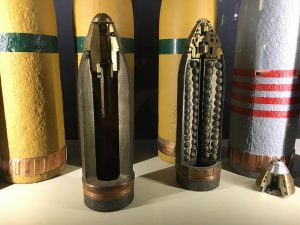 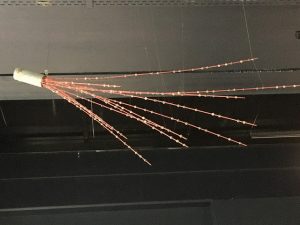 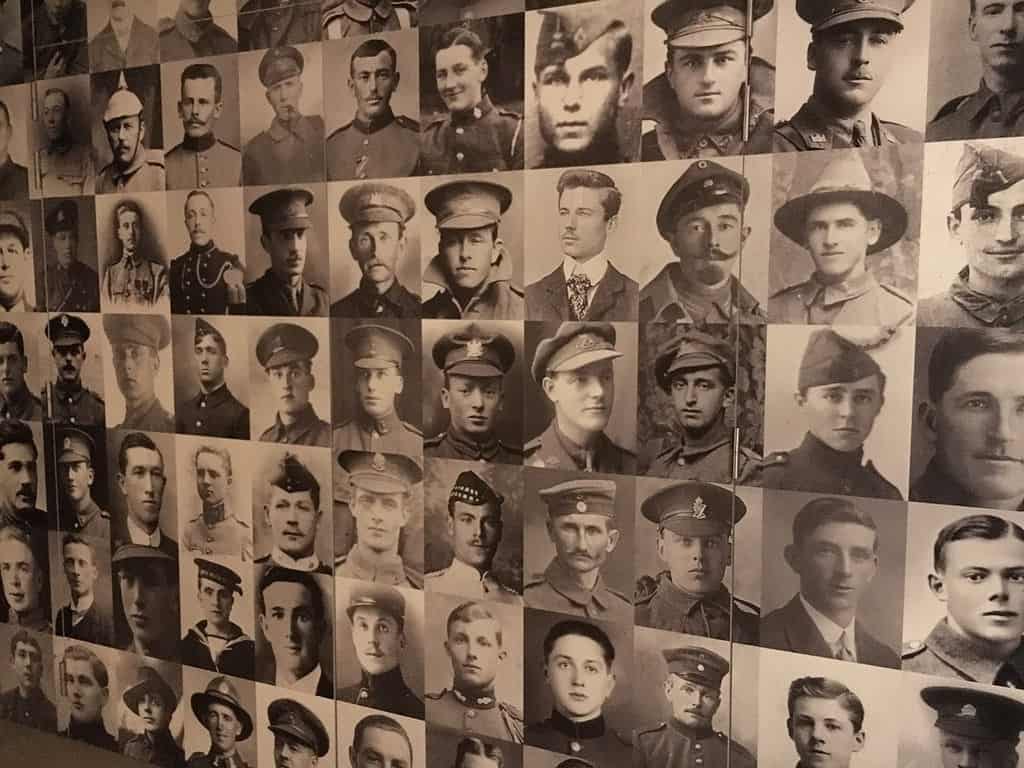 Further along, an entire wall is covered with black and white photos. Men. Boys. I appreciate how this museum has chosen to focus on the individual soldier, rather than the numbers. 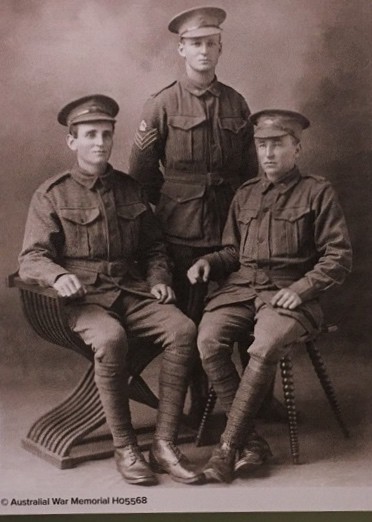 Look at this portrait! Three young Aussies, aged 20 to 25. William, George and Theo Seabrook. All killed at Passchendaele, during or shortly after the Battle of Menin Road. Imagine being their parents. Receiving that message.

As I wander down the stairs to the recreated dugout here inside the museum, I’m curious. Will it feel like the real dugout?

Afraid not! Visually, the recreated dugout is true to the real thing; there are steep stairs going down underground, it is dimly lit, and shows the everyday life (as it were) in a dugout, with mannequins. Viscerally, it does not measure up. The recreated dugout is warm, leak free, clean, dry, comfortable. 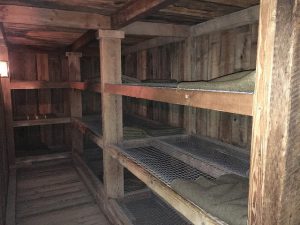 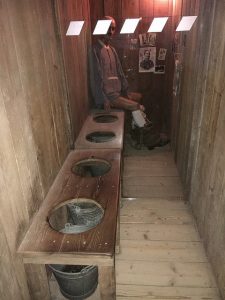 Trenches lined the western front lines in World War I, from the North Sea through Belgium and France. About 2 500 km of them. Exiting the recreated dugout, I enter the trenches. Again, well-represented visually, with gun holes and sandbags for reinforcement. And again, dry and clean. The real trenches were rarely that. 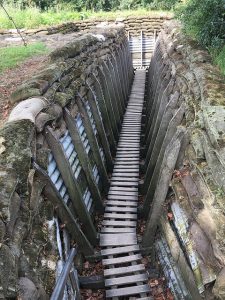 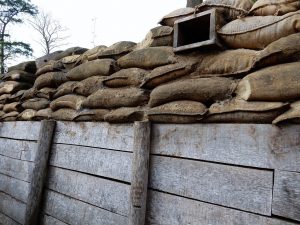 A glimmer of light: The Christmas Truce

For Christmas 1914, the first war year, British and German soldiers lay down arms, exchanged gifts and sung Christmas carols. Together.

The museum is set in several hectares of parkland, with pathways, trees, a lake, little bridges, and a memorial garden. There’s also a playground and a restaurant. You’ll see families out on picnics, anglers trying to catch fish. It is unfathomable that this pastoral setting was once the scene of horrific mass killings. 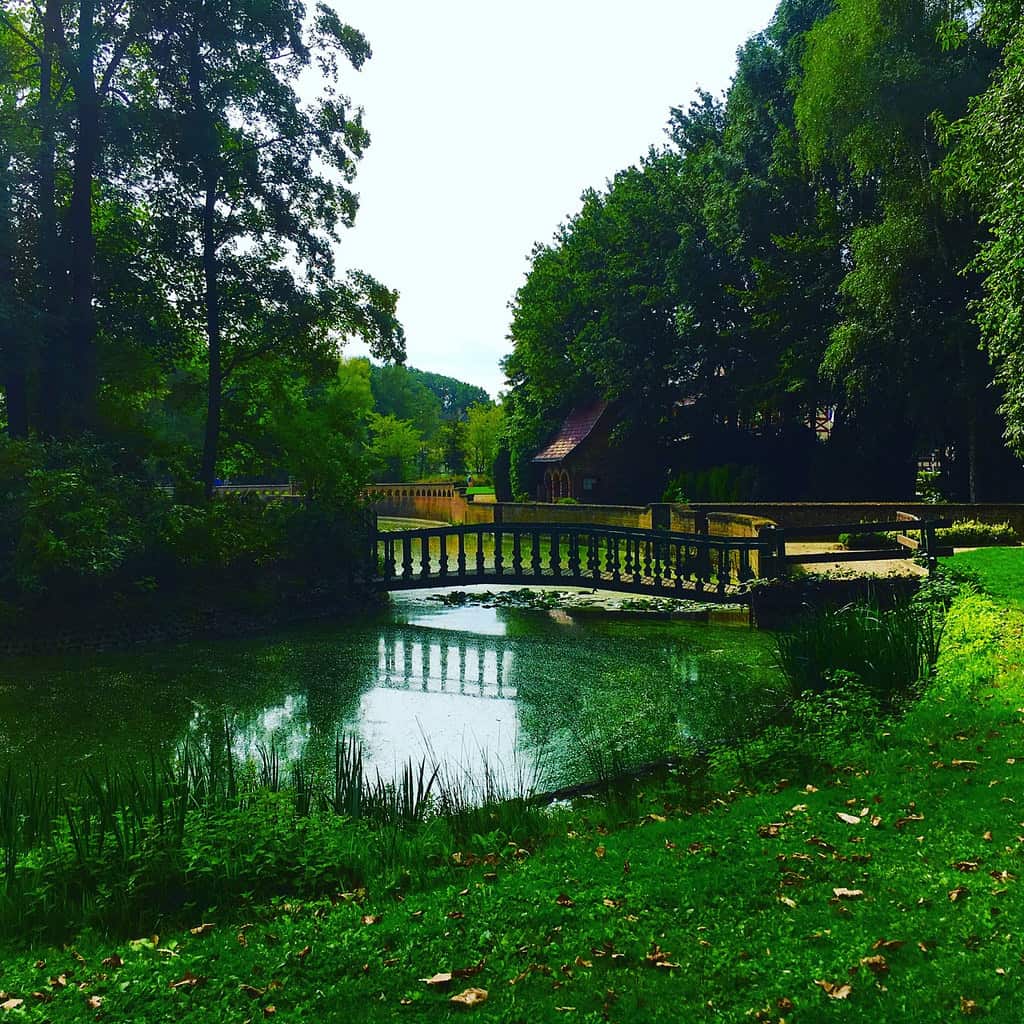 Tyne Cot Commonwealth War Graves Cemetery and Memorial to the Missing is not to be missed. It’s only 3 km from Zonnebeke, an easy walk. Though we drive, as we have a very full day. Here at Tyne Cot is where you’ll recognise the photo you have seen so many times: row upon row of white gravestones. 12 000 are buried here. 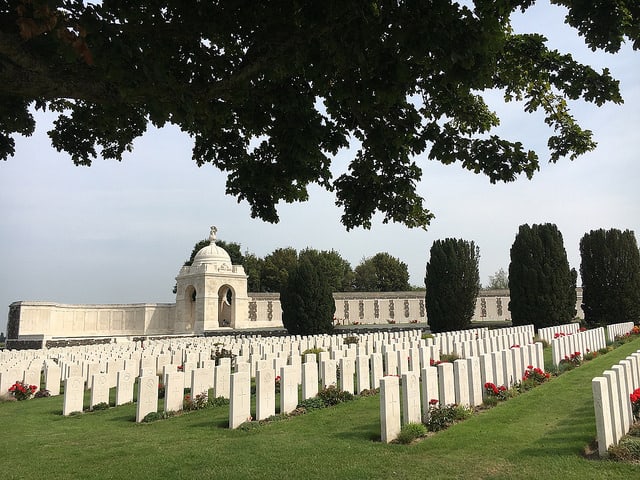 A further 34 959 names are inscribed on the walls around, 33 783 British and 1 176 New Zealand soldiers: those whose bodies were never found. 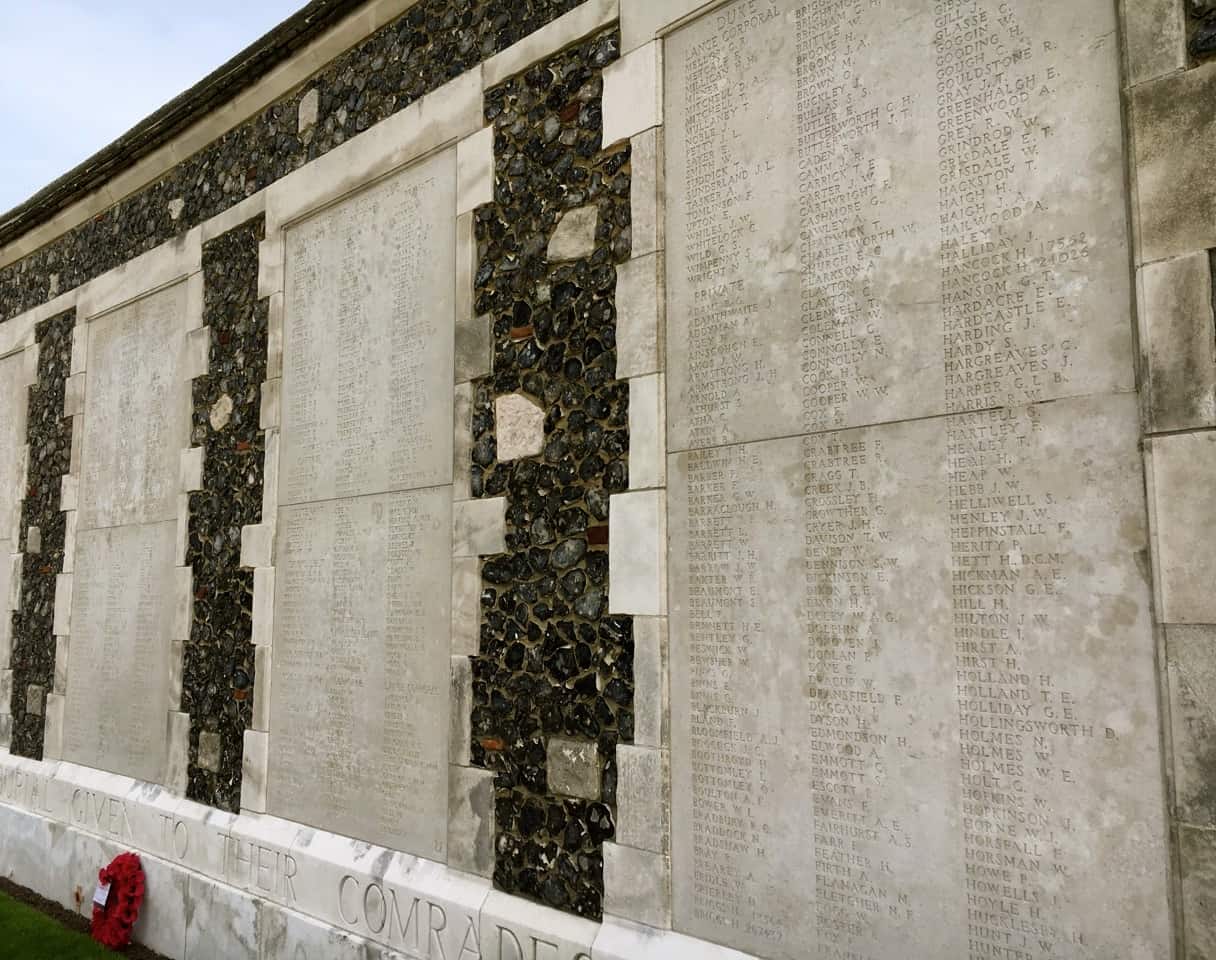 The cemetery is on a height, and you can see for miles afield. A resting place with a view. It is a thought-provoking place. Even more so, probably, if you’re British or from one of the many Commonwealth countries who fought bravely alongside the Brits.

Buried among the Commonwealth soldiers – sort of to the side a bit – I see two plain white stones: the final resting place of four German soldiers. 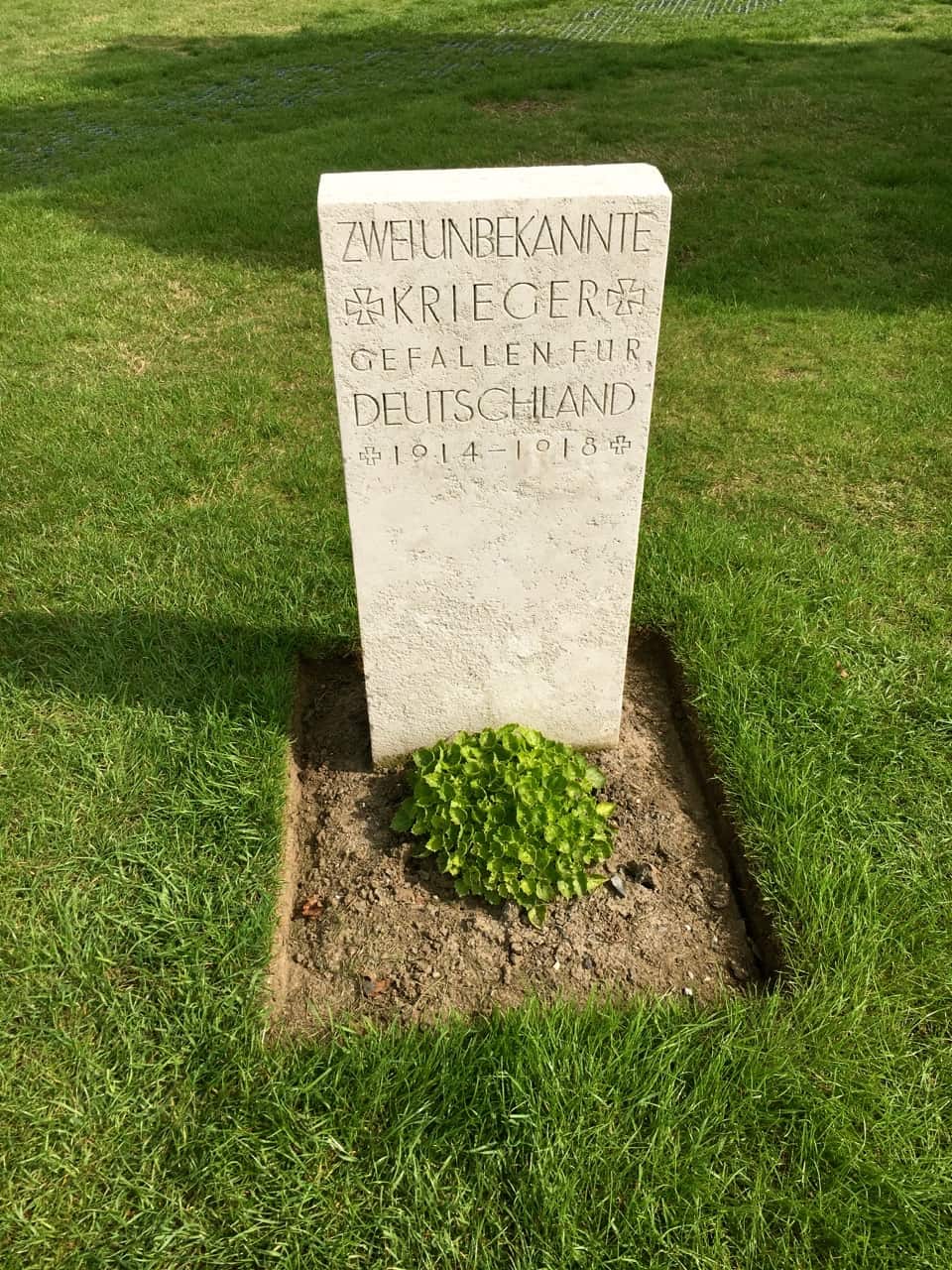 In the centre of Ypres, the large, interactive In Flanders Fields Museum is excellent as well, and one that needs its own day. 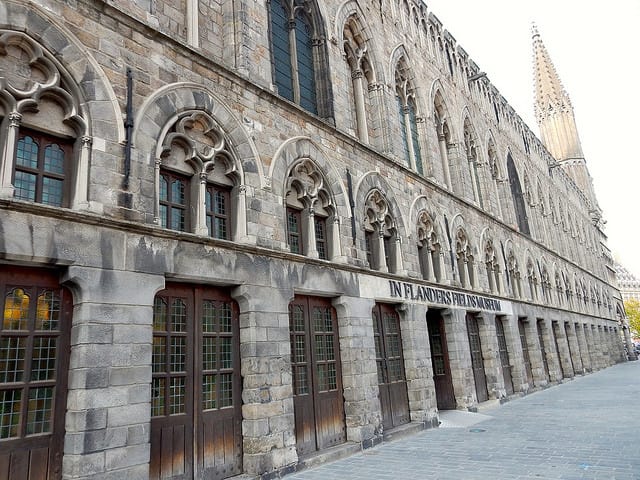 In Flanders Fields Museum is innovative and makes good use of multimedia technology. On arrival you’re given a poppy bracelet with a microchip that lets you choose your preferred language and discover the stories of 4 individuals. Sadly,  time restraints prevented me from taking proper advantage of this fun little gadget.

My favourite feature (here as well), was the focus on individuals, both Allied and German, particularly the personal stories told on wide screen.

Art is an important part of this museum, particularly photography and poetry. The building itself is a work of art as well, the old cloth hall, rebuilt after being thoroughly bombed during the war.

Both museums are superb and complement each other nicely. Choosing one (if your time is limited) is really a matter of personal choice. If hi-tech is your preferred choice of learning, go for In Flanders Fields Museum. I would choose the Memorial Museum Passchendaele 1917, because it gave me a better sense of place and circumstance. 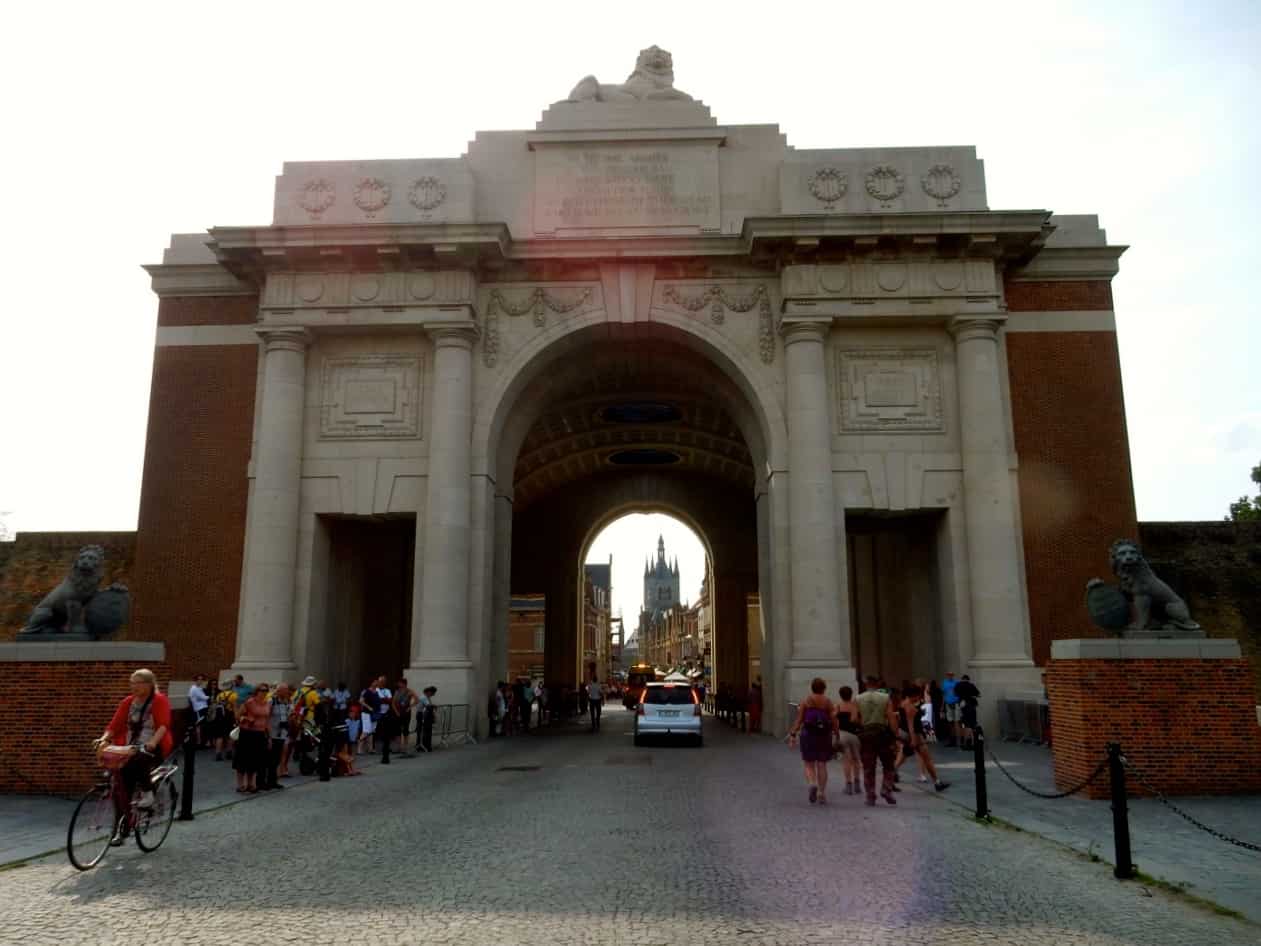 The gateway to the town of Ypres looks like an Arc de Triomphe. It is a mausoleum honouring the missing from World War I, with 54 395 names inscribed on its walls. After that, there was no more room, and so the remaining names were inscribed at Tyne Cot cemetery.

Remember the three Australian brothers? I see their names once again on Menin Gate, but only two. William is buried in Lijssenthoek near Ypres. Theo and George were never found. 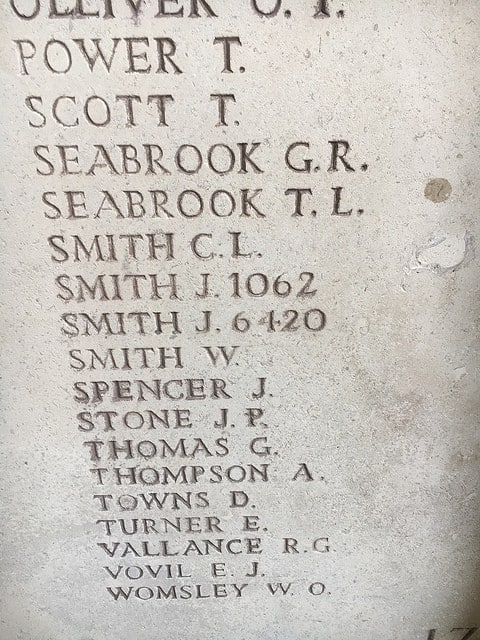 At 8pm sharp, the missing are commemorated in a ceremony known as Last Post, as they have been every evening since 1928. The police halt the normal traffic through the gate while the buglers play.

For some reason, on our visit, the Last Post takes place at 15.00, and is an extended version. In addition to the buglers, we hear speeches, music, bands playing. 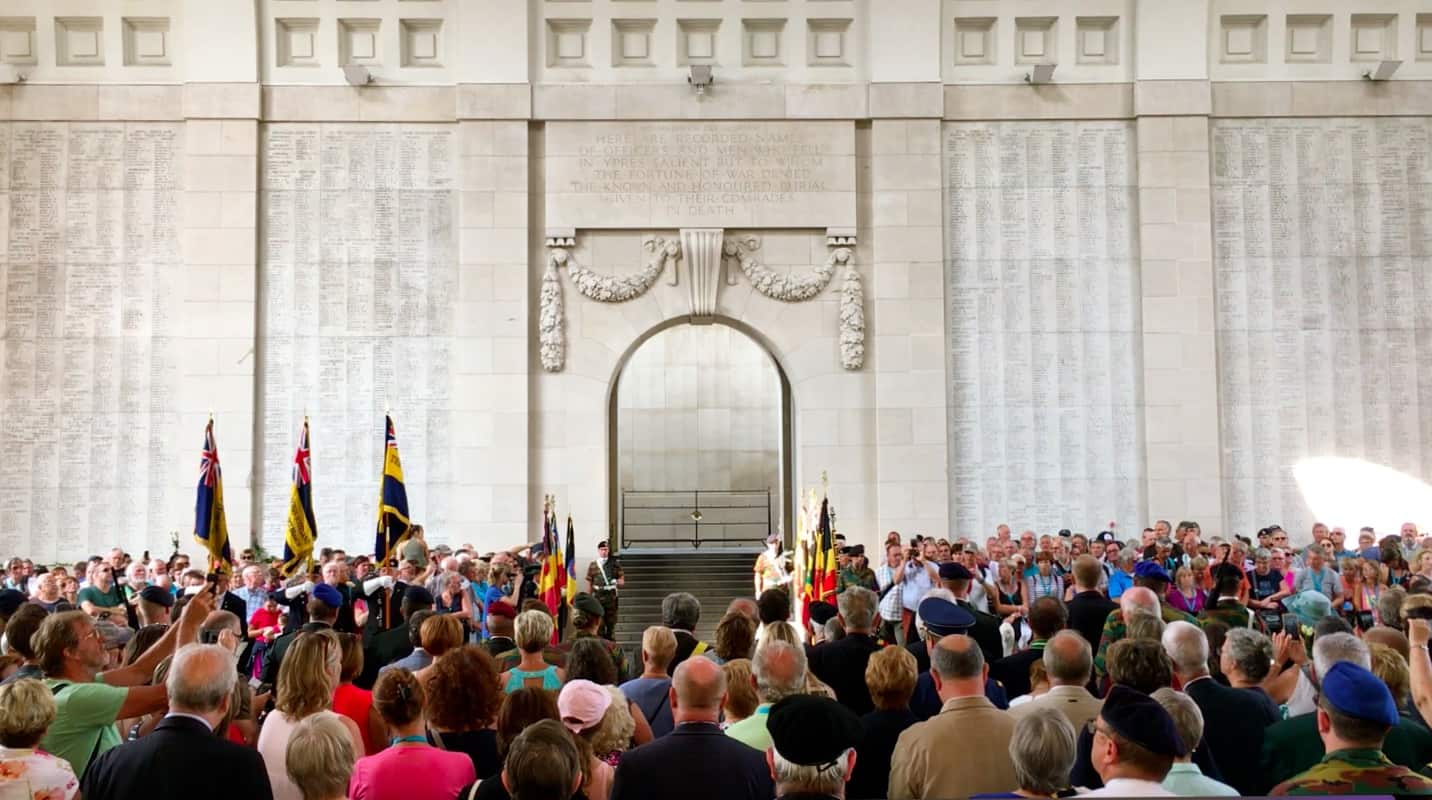 Remains of soldiers are still found around Ypres, often in connection with building works.

If the remains can be identified, they’re given a proper burial and their names are removed from the memorial. In April 2016, the remains of 19 soldiers were found here in Flanders, of which
“…2 soldiers have been identified as members of the 1st Royal Warwickshires who died on 25/4/1915: 1 officier and 1 other rank.“ 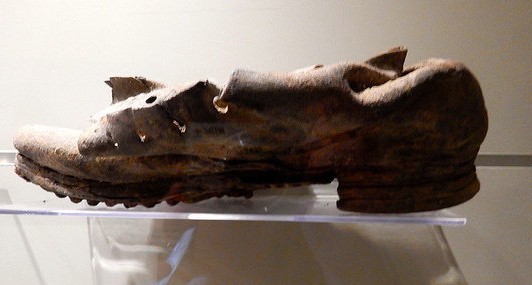 As I leave Ypres, I wonder about Theo and George: will they ever be found?

We are the Dead. Short days ago
We lived, felt dawn, saw sunset glow,
Loved and were loved, and now we lie
In Flanders Fields.

Ideally, I would set aside a day for the Memorial Museum Passchendaele 1917, the dugout and Tyne Cot cemetery nearby. Then another day for Ypres with In Flanders Fields Museum and the Menin Gate.

If you plan to visit Flanders Fields, and want to lean into the experience, to feel it rather than just see and hear about it, then don’t delay! November 2017 is your latest possibility to enter the real dugout but it might even be earlier, if the 100-year-old dugout can’t handle the traffic. Come early in the morning, when it first opens; you might have a chance to be down there by yourself with nothing but dripping water to disturb the eerie quiet. It makes a world of difference.

Disclosure: I was at Flanders Fields in a cooperative project between Nordic TB, Visit Flanders and Brussels Airlines. All words and opinions are mine and mine only, as ever. Otherwise, this would be meaningless.