World at a Glance: The fountains of Bern 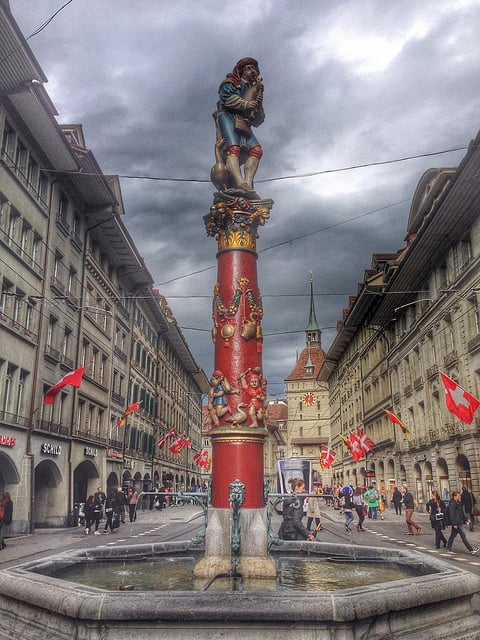 Bern is one of Europe’s more unassuming capital cities. Like Canberra is overshadowed by Sydney and Melbourne, all the attention here goes to big sisters Zurich and Geneva. In fact, if asked What is the capital of Switzerland? in a pub quiz, I’ll bet many would shout out one of the two.

Despite numerous visits in Switzerland, Bern remained one of the few European capitals I hadn’t seen. I’m sure I’m not alone; most visitors to the Alpine country skip Bern altogether. That’s a shame: the Swiss capital is a very pretty city with lots to offer, as I found out this summer when I finally decided enough as enough.

One of the most striking features – and one of the first things you’ll notice – is the Renaissance fountains of Bern. Just as soon as you walk out of the railway station and turn a corner, there they are, one after another. More than 100 fountains grace the streets of Bern: in city squares, in front of Medieval churches and in the middle of busy streets with trams rambling by on either side; elaborate fountains in vivid colours, with intricate details. It’s a bit like wandering through a fairytale: here’s Schützenbrunnen (the Marksman), there’s Moses with the 10 commandments, over there is Gerechtigkeitsbrunnen (the blind-folded Lady Justitia), incredibly detailed and artistic. For centuries, these fountains provided the good citizens of Bern with drinking water.

The prize for the most beastly fountain in Bern goes to Kindlifresserbrunnen, the child eater fountain – depicting an ogre about to wolf down a baby, with a bag of additional ones ready for dessert. Others are much more pleasant, such as the Anna-Seiler-Brunnen, portraying one of Bern’s good denizens. (Anna Seiler founded the city’s first hospital in 1354. Today, 660 years later, the hospital is still in operation.)

Most of the fountains of Bern are created by Hans Gieng, who lived and worked here in the 1540s. Pfeiferbrunnen (The Piper, in the photo above) is located on Spitalgasse, just 2-3 minutes from the railway station.