National Geographic’s Intelligent Travel hosts the series I Heart My City. Time to show off Oslo a bit. It’s not all about expensive beer, ya know! You’ll find links to most of the sights in my Nat Geo article. 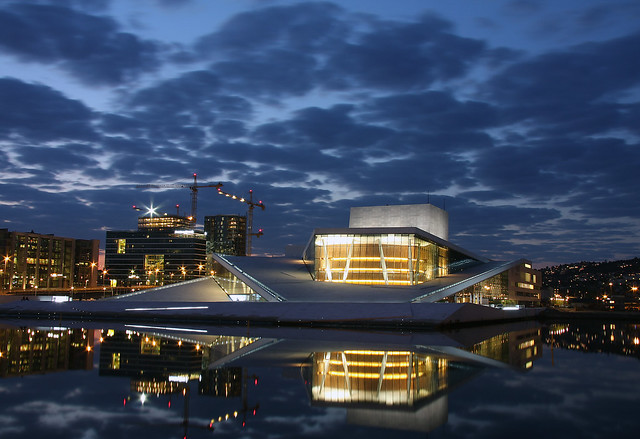 The first place I take a visitor from out of town is Vigeland Park, taking in Gustav Vigeland’s fabulous nudes amidst the scent of 14000 roses.

When I crave coffee, cake and cool jazz, I always go to Bare Jazz, watering hole and well-stocked record shop.

To escape the crowds on a Saturday afternoon, I sit down under a tree by medieval Akershus Fortress and watch life as it passes by.

If I want to have a beer and people watch, I go to Aker Brygge.

For complete quiet, I can hide away in the Nordmarka Forest, 20 minutes by tram from the city center. Except on Sundays, when everyone else is doing the same.

If you come to my city, get your picture taken next to the Angry Little Boy.

If you have to order one thing off the menu from Grand Café it has to be a huge prawn sandwich.

Nomaden is my one-stop shop for everything travel-related, from books to bug spray.

For a huge splurge I go to Bagatelle, for its emphasis on local products and modern cooking (and two Michelin stars).

Photo ops in my city include the new Oslo Opera House and the best vantage point is the roof.

If my city were a celebrity it’d be Alfred Nobel of Nobel Prize fame, prosperous and peace-loving.

Considering it’s the world’s most expensive city, the most unexpected thing about my city is the wide range of inexpensive/free activities on offer.

My city has the most tall, blond, athletic men.

My city has the most tall, blond, athletic women.

In Oslo, an active day outdoors involves a long hike in the forest surrounding the city – or sailing on the fjord.

My city’s best museum is the Natural History Museum, where you can meet Ida, the oldest primate fossil ever found. 47 million years old, she’s our oldest relative.

My favourite jogging/walking route is around Bogstad lake.

For a night of live music – heavy metal or jazz – check out Blå.

Onkel Donald is the spot for late-night eats.

To find out what’s going on at night and on the weekends, read visitoslo.com

You can tell a lot about my city by watching people metamorphose with the arrival of spring.

You can tell if someone is from my city if they claim they were born with skis on their feet. They were!

In the spring you should watch the russ (high school seniors) dressed in red and acting naughty, livening up the city (way too much for some people’s tastes.)

In the summer you should island hop in the Oslo fjord, stopping at Hovedøya to swim and explore medieval monastery ruins.

In the fall you should wade through the rustling leaves and chestnuts along Karl Johan, Oslo’s bustling main street.

In the winter you should rent a pair of skates and dance at Narvisen skating rink in the city center.

A hidden gem in Oslo is Huk beach, where you can wear a swimsuit if you want. Or not.

For a great breakfast joint try any branch of BIT, where you get free croissants with coffee before 10 o’clock.

Don’t miss 17 May – Norwegian national day, when all the schools parade along the streets and the royal family waves for hours from the palace balcony.

Just outside Oslo, a mere 30 minutes away, you can visit river city Drammen, where you can climb Kjøsterudjuvet Canyon or sit on a fountain at Bragernes Square and munch strawberries. Cross pedestrian bridge Ypsilon and listen to the River Harp, a cool sound sculpture reflecting variations in water flow and bridge oscillations.

The best way to see Oslo is on foot.

If my city were a pet it would be a cat, stretching lazily in spring after a long winter nap.

If I didn’t live in a city, I’d live near a glacier by the ocean.

The best book about Oslo is Knut Hamsun’s Hunger.

When I think about my city, the song that comes to mind is Fairytale by Alexander Rybak, combining traditional Norwegian folk music and modern pop (and winner of the 2009 Eurovision Song Contest.)

If you have kids, you won’t want to miss Bygdøy with Viking ships, Thor Heyerdahl’s Kon-Tiki raft and the Polar ship Fram, used by Roald Amundsen for the 1911 race to the South Pole. He won!

Allemannsretten could only happen here; meaning that anyone has access to uncultivated land, including mountains, forests and beaches – regardless of ownership.

Oslo should be featured on your cover/site because it’s home of the Nobel Peace Prize, recently famous for being somewhat controversially awarded to Barack Obama.