Karnak: the largest ancient religious site in the world

We’re up early, 5 am, so we can experience Karnak before the crowds.

Situated right outside Luxor, Karnak Temple is the largest ancient religious site in the world. An impressive avenue of ram-headed sphinxes connects it with Luxor Temple.

Karnak is a place of records: everything here seems to be the biggest and tallest. Its scale defies description. The first pylon (gate) alone is 42 metres high (like a 14-storey building) and 118 metres wide. Ancient Egypt must have been in awe of its builders. But I don’t suppose these dogs care one bit.

The Great Hypostyle Hall (hall of columns) is the largest of its kind in Egypt, with more than 130 columns in 16 rows, once decorated with multicoloured paintings and reliefs. The reliefs, although no longer multicoloured, are still clearly visible. Tourists through the ages have added to the décor. It’s desecration really, yet I can’t help but be fascinated by the Victorian Era vandals. 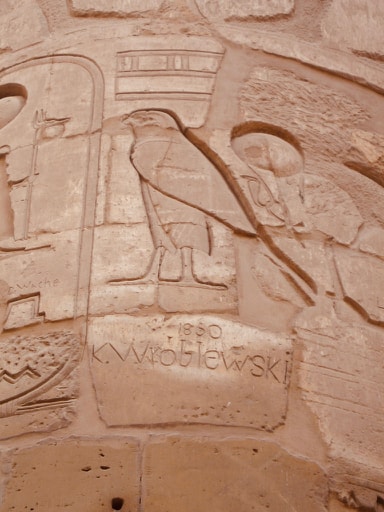 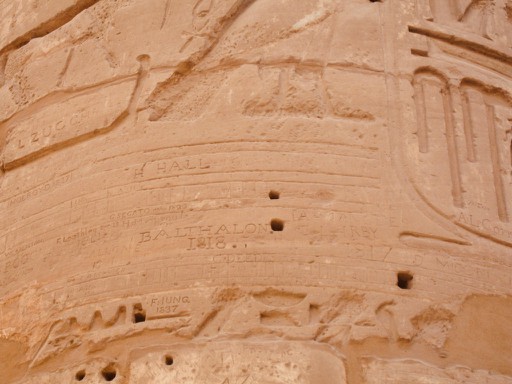 Men cringe at the sight of the circumcision chair, essentially a flat stone with a sunken bowl to collect blood, another flat stone mounted on top as a seat, and a long track clearly indicating where to put the relevant body part. According to Herodotus, the ancient Egyptians adopted circumcision in their search for cleanliness. It may also have been a rite of passage for teenage boys, no longer children. 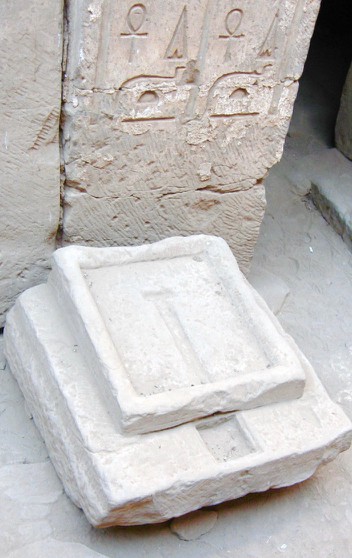 Pharaoh Hatshepsut was one of the most prolific builders in ancient Egypt and she liked obelisks. Only at Karnak, she had six of them raised. Sadly, only one remains. Almost 30 metres high, it’s the tallest surviving ancient obelisk on earth, and its tip is said to have been covered in gold. Must have looked brilliant. The obelisk is my first glimpse of this mysterious female pharaoh. I look forward to getting to know her better.

Hatshepsut’s stepson, Thutmose III, wasn’t very keen to keep her memory alive, to say the least. He had a wall built around the obelisk, presumably to hide it. Much of the wall is still visible today. 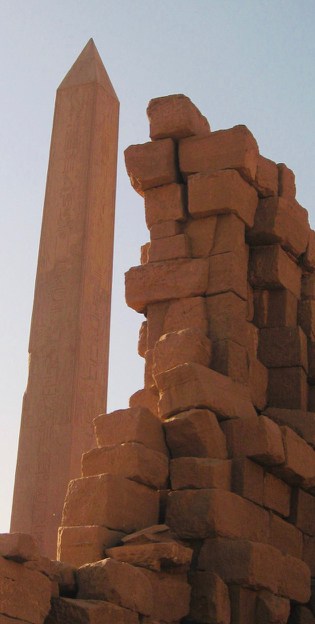 Meanwhile, my youngest heads towards a huge sacred scarab beetle. Walk around it three times for luck, five times to get married, seven times if you’re tired of the spouse you have and want a new one… Something for everyone! Or so we’re told. 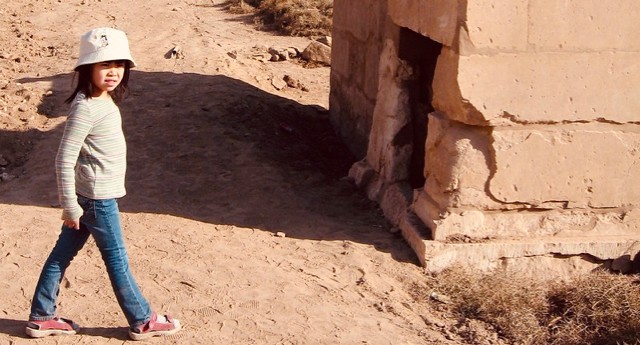 Karnak is part of the UNESCO World Heritage site Ancient Thebes with its Necropolis.