Day out Gdansk: The Malbork Murder

If you happen to be floating down the tranquil river Wisla, head off at the little branch called the Nogat, and you’ll come to a Gothic fairytale fortress and some intriguing Malbork Castle history, murder included! 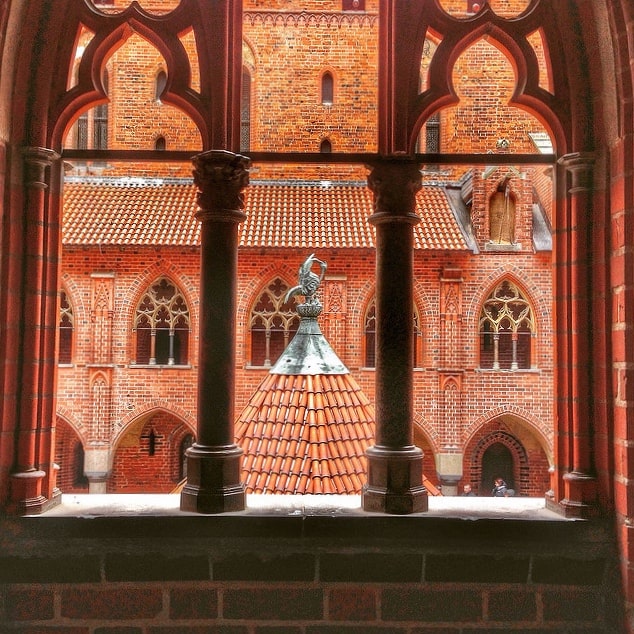 Disembark on the opposite bank, and this imposing 13th century fortified monastery is all you’ll see. The view is particularly magnificent at sunset.

Of course, chances are you’ll not be arriving by river raft, but rather less romantically by rail or road from Gdansk, a mere 60km (1 hour) away. It’s a worthwhile daytrip, one that allows the imagination free reign, especially outside the tourist season. I’m here on a rainy March day, and have the enormous castle almost all to myself.

So what is Malbork? Huge, that’s for sure! By surface area – 21 hectares! – this is the largest brick castle in the world.

And who built this monumental medieval construction? Are you familiar with the Teutonic Knights? They were formed to help Christians in the Holy Land, i.e. Palestine. This merry gang of monks also had a penchant for converting people to Christianity, and often used the well-known convert-or-die tactic. 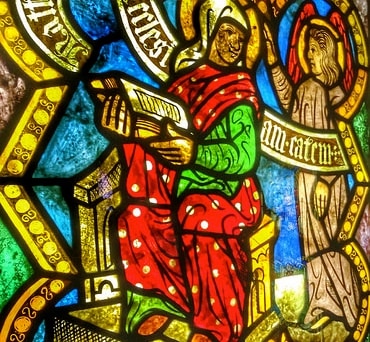 As Palestine was lost to the Islamic hordes, our Knights needed a new base, and found one here in Poland. Little did the Polish king know he was dealing with brutal murderers. Rather than safeguard the citizens of nearby Gdansk, the knights brutally killed them in 1308. 102 years later karma kicked back, when the knights were defeated at the Battle of Grunwald. But chasing them out of Marienburg, the Teutonic name for Malbork, proved a rather more difficult proposition.

However, the Teutonic Order declined (happens to the best of us), and in 1457, Polish King Casimir IV took over the castle. Fast forward roughly 300 years, and Malbork was in the hands of Royal Prussia after the Partition of Poland in 1772. The Prussians, military chaps as they were, thought the best use of this magnificent castle was to reduce it to barracks. Who needs all those towers and walls and windows and decoration anyway? Fast forward even further, to World War II, when the Soviets did even more damage – bombing and the like. By the mid-20th century not much was left of this once splendid edifice.

Luckily for you, as you’re slowly drifting past, Malbork has been faithfully reconstructed. Today it looks glorious. So impressed was UNESCO’s World Heritage Committee, they added the castle to its prestigious list in 1997. 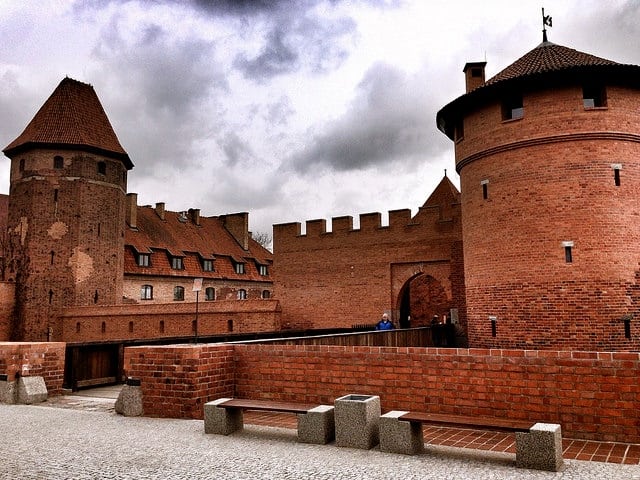 So what can you see at Malbork Castle? Why, a weapons collection, of course. Wouldn’t be a proper castle without, now, would it? Then there’s amber – a very good amber museum, in fact. And rooms showcasing Teutonic lifestyle. All very impressive.

The audio guide you get at the entrance comprises 38 stops. First, go across the drawbridge, then through the doors to the courtyard, and stop at the Grand Masters’ Palace and the Knights’ Hall, a huge 450 m2 chamber with a particularly stunning ceiling. Then have a look at the beautiful St Mary’s Church, where the monks went to pray – accessed through the Golden Gate, which plays a part in the murder I promised (patience, patience…). You might also be interested in seeing the monks’ toilet high up in its own tower – and their kitchen. Of course, there’s miles and miles (or so it seems) of long tunnels, hallways, corridors and towers, too. 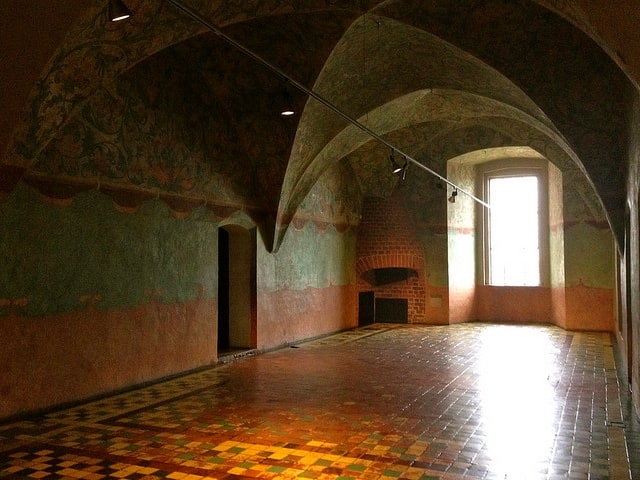 The audio guide points out interesting little elements all around the place: look up at the ceiling here and find the hidden statue there. Fun for all ages. Plan at least half a day to see the inside of the castle.

Odd fact: During Adolf’s time, the Hitler Youth and the League of German Girls used Malbork castle as a place of pilgrimage every year. 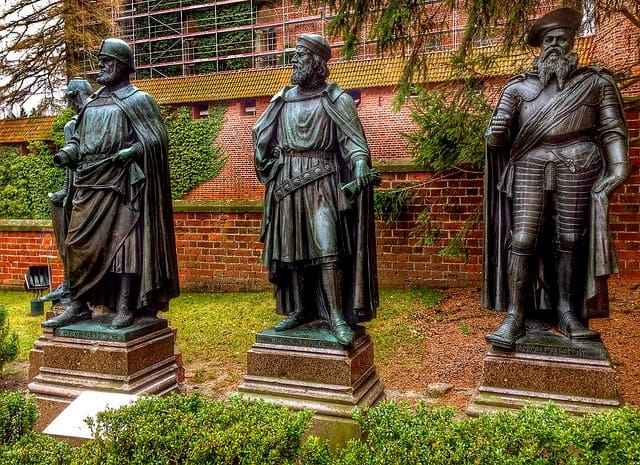 There was once a Teutonic Knight named Werner von Orseln. This German nobleman was chosen as Grand Komtur (second-in-command after the Grand Master) at Malbork in 1314. Then came a coup d’etat. Von Orseln naturally supported the then Grand Master who had appointed him (one does want to be loyal, doesn’t one…), and, as a result it was off to exile with the both of them. Political machinations are never easy, are they?

von Orseln came back, with the intent of restoring discipline and order, and was elected Grand Master in 1324. He began negotiations with the Polish king over the contested Pomerania, annexed by our knights after they took over Gdańsk in 1308, but the negotiations got nowhere. Nothing for it, then: war was in order.

During this war, our friend von Orseln was murdered by a mad monk, one Johan von Endorf. Or so it is said. But was he mad? And was he a murderer? And who indeed was this Endorf? A criminal monk, it would appear, and one referred to by many names: Biendorf, Grondorp, Dyngdorff and Stille are but a few. To this day, all is unclear.

On 18th November 1330, Endorf arrived in Malbork to speak with the Grand Master. And so he did, in von Orseln’s private chambers, no less. Endorf, you see, wasn’t happy with his current posting and wanted to be sent elsewhere. However, von Orseln would have none of it, and ordered him to return. Naturally, Endorf was none too pleased. He waited for von Orseln to come out of the chapel after prayers, and stabbed him near the Golden Gate. Von Orseln died. 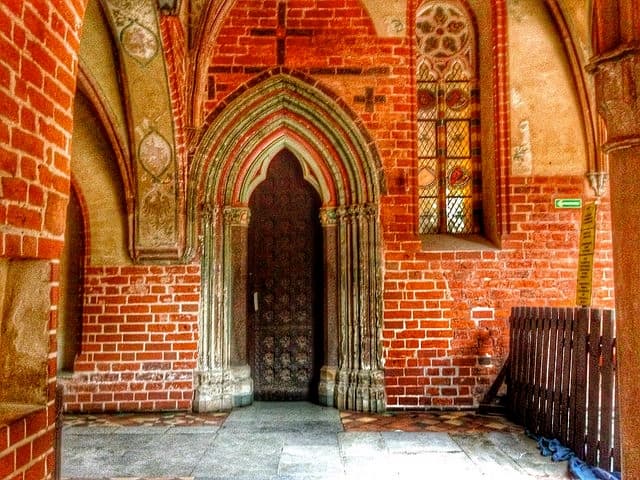 A juicy murder such as this will of course be contested. What really happened? Was there a conspiracy? Was there a lone shooter at the school book depository – or was someone sinister hiding by the grassy knoll? Oops, wrong murder.

The trial concluded that Endorf was mad as well as guilty, and he was given a life sentence. But was he the culpable crackpot he was deemed to be? If he was such a lunatic, why didn’t he attack von Orseln when they were alone together in the Grand Master’s quarters?

If not Endorf, then who was behind this murder? Who might have wanted the Grand Master dead? Polish or Lithuanian nobility, perhaps? 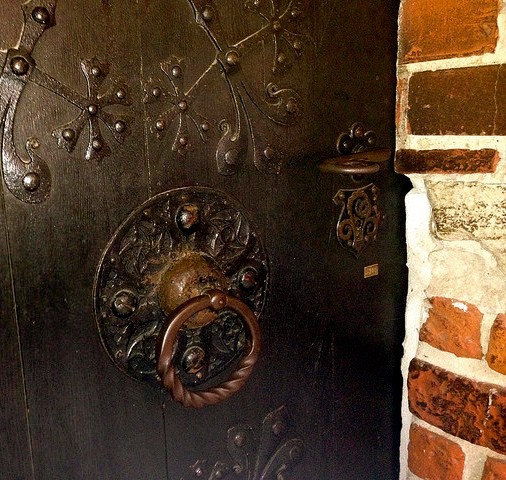 The Castle of the Teutonic Order in Malbork is a UNESCO World Heritage site.
Here are more heritage sites around the world.