Like nearby Trier (Germany), and Nancy (France), the city of Metz was first inhabited about 3,000 years ago, and you can see evidence of Celtic and Roman times here. Medieval ones, too. But I’ll go out on a limb and say it is the last 150 years that sets Metz apart. A bit like a football, it was kicked from France to Germany (1871), back to France (1918), then a brief spell in Germany (1940) and back to France again in 1945. Can’t have been easy for the Messins, considering the rather ructious relationship between France and Germany in pre-EU times – or pre-ECSC-times, I should say.

Today, Metz is a major city at the confluence of the rivers Moselle and Seille, in the trans-border Euro region known as SaarLorLux – Saarland, Lorraine, Luxembourg. That paves the way for an interesting cultural mix. 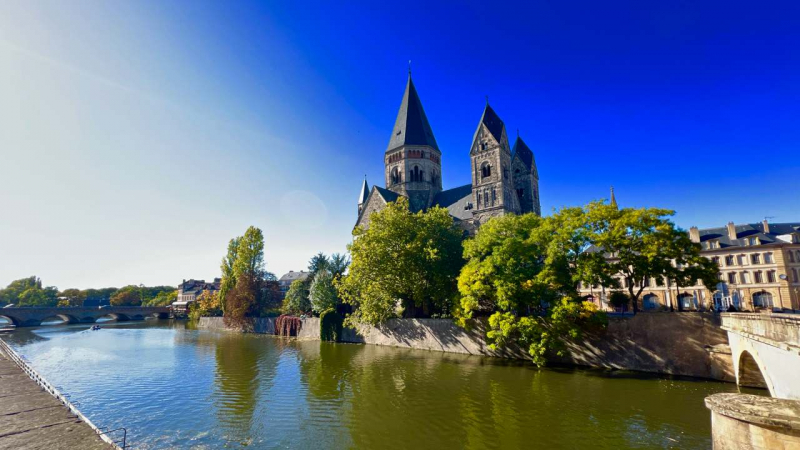 Take a walk through Metz with me. And let’s begin just outside the railway station. In fact, let’s begin with the station.

Paris may very well have France’s most famous railway stations, but which is the loveliest of them all? SNCF, the French national rail company, did a poll on their Facebook page, and Gare de Metz-Ville won with 31,000 votes. The French public has spoken.

Looks almost like a church, doesn’t it – with the elaborate masonry work and the 40-metre tall clock tower. 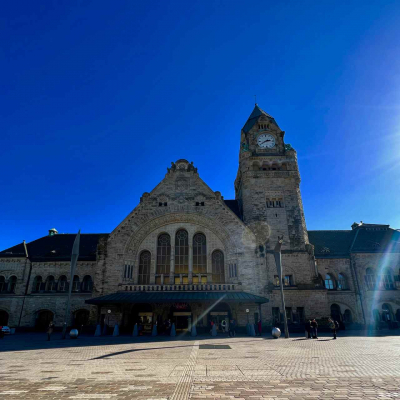 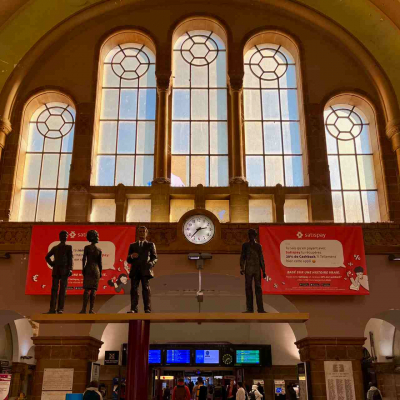 Creative art inside the station as well

Under the German annexation, Emperor Wilhelm II decided that Metz should have more of a German appearance, so he had a new district built, designed by German architects. The district is known as the Le quartier impérial, with the railway station as a central part. The neo-Romanesque station was finished in 1908, and listed as a historic monument in 1975.

After having a good look at the railway station – all 350 metres of it – turn slightly, and you’ll spot this rather impressive water tower. Built at the same time as the station, with balustraded balconies, it is known as Chateau d’Eau, the water castle. 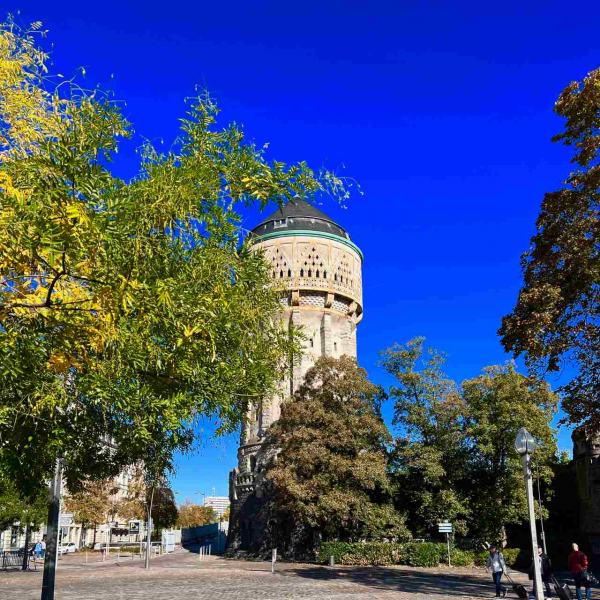 QI of the day: Why would a railway station need a water tower? I can’t say for sure, but I’m guessing it has to do with steam trains, 1908 n’all. 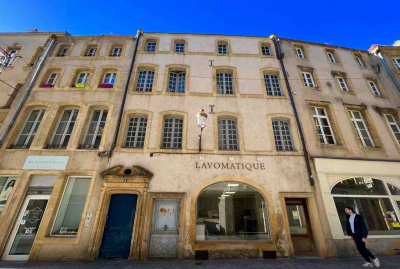 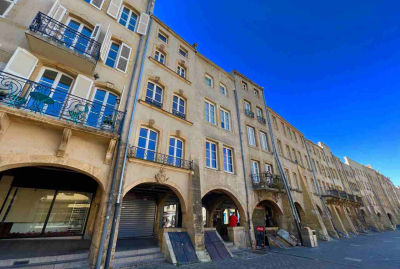 After a short walk, we are at Place St Louis, the 14th century square in the centre of town. On this Sunday afternoon in October, the medieval square is full of people out and about. La Place St Louis is surrounded with warm yellow buildings with 60 arcades, quirky shops and galleries. This is where you’ll find the city’s main Christmas market, sure to be very atmospheric. 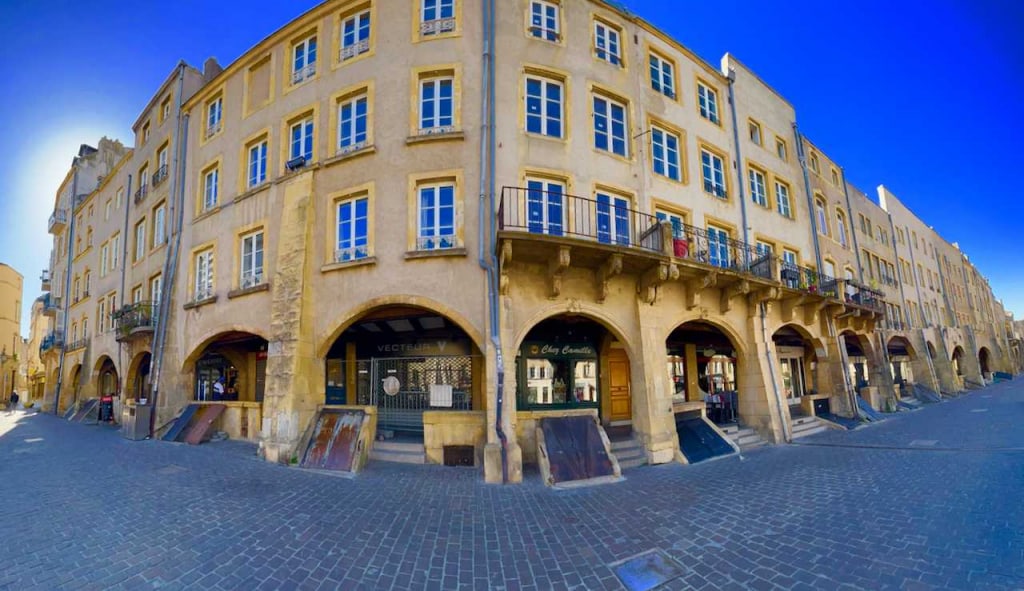 I mentioned Roman and medieval Metz. Around the charming Rue Taison is where you’ll find the traces of Metz’ earliest settlers, ca. 3,000 years ago. The city was known as Mediomatrici, after the Celtic tribe that lived here. In Roman times, the name was latinised to Divodurum Mediomatricum, shortened to Mettis in medieval times. One of the largest crossroads in Rome was here. You can see remains of Roman thermal baths and a forum in Metz Museum. 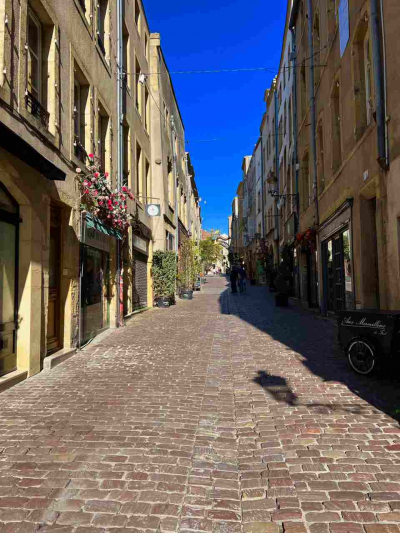 Moving on, we are in the old town, at the 18th century Place d’Armes, bordered by the town hall and Metz’ chef-d’oeuvre: The Gothic Cathédrale Saint-Étienne, another listed historic monument. 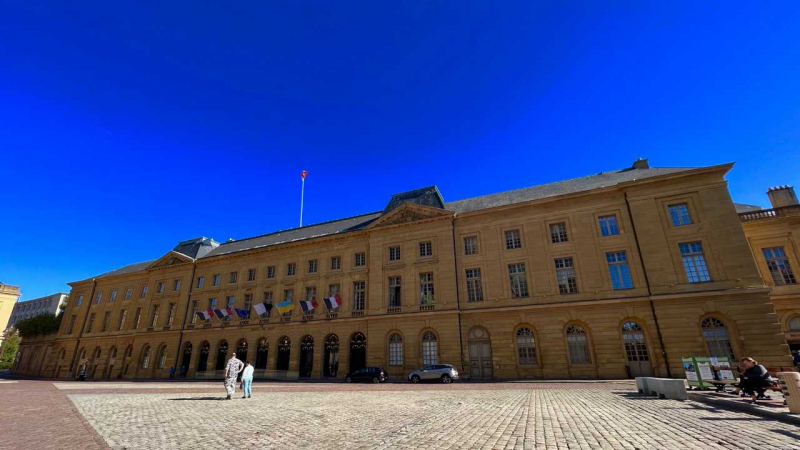 Place d’Armes with the Town Hall

Like Cologne’s Kölnerdom  -and probably most cathedrals – it took a while to build Metz Cathedral, around 300 years, from 1220 to 1522. It is one of France’s tallest churches with the country’s third highest nave, 41.41 metres. 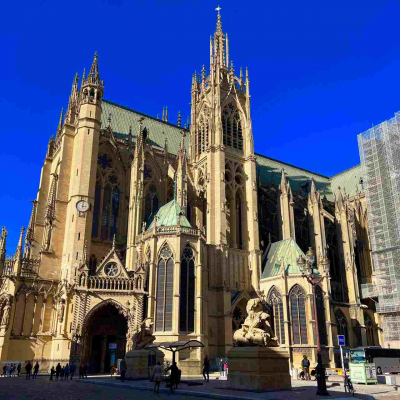 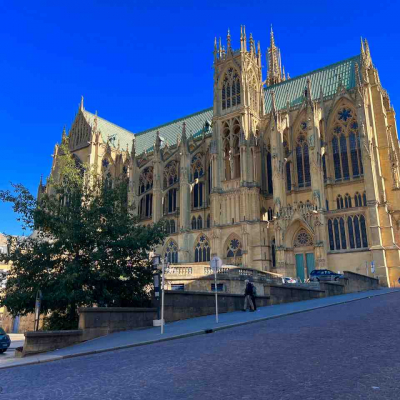 The lofty Metz Cathedral, front and back

The cathedral holds more records, including the largest surface area of stained glass – an impressive 6,496 m2. It’s such a huge expanse of glass, the cathedral is known as la Lanterne du Bon Dieu, lantern of the Good Lord. 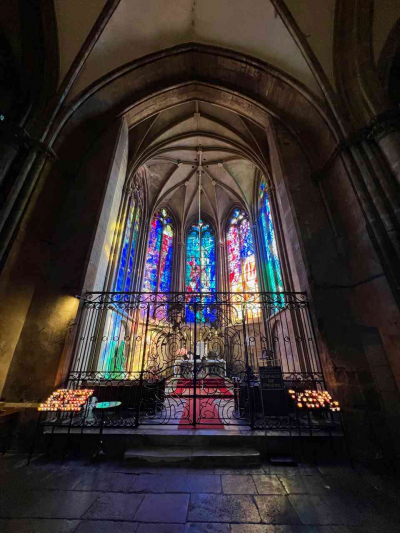 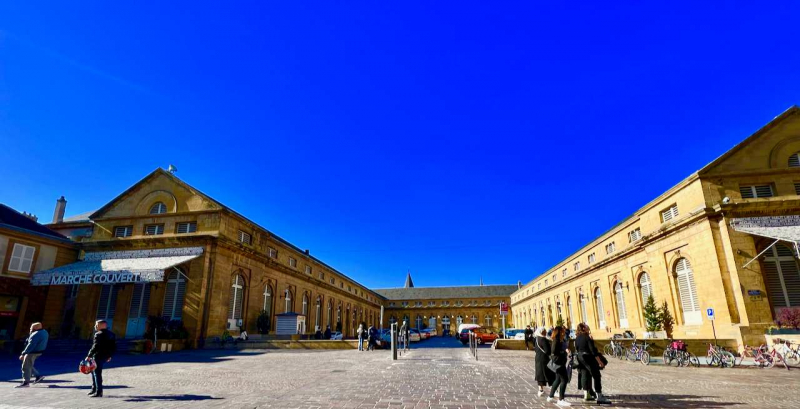 Near the cathedral is the 18th century U-shaped covered market, one of the oldest in France. 40 shops with fresh produce for sale under the roofs here. 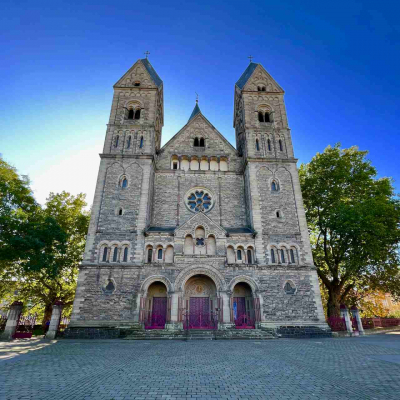 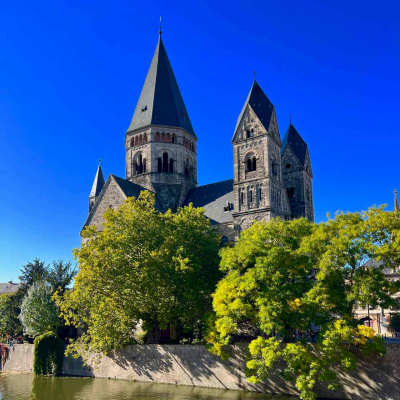 On the banks of the River Moselle, Le Temple Neuf (New Temple) is a completely different kind of church. Looks more like the railway station, you say? You’re right. It was built in 1905, back when Metz was under German control. And like the railway station and the cathedral, it is yet another of Metz’ listed historic monuments. Behind Temple Neuf is the Jardin d’Amour, the Garden of Love, a lovely, quiet place to watch the river drifting by.

You can’t not love a bright open space called la Place de la Comédie, can you?

In the middle is the oldest working opera theatre in France, from 1752. Molière, Voltaire, Beaumarchais, they were all staged here. Then came the French Revolution and Place de la Comédie served a more sinister purpose. People lost their heads in the guillotine (nicknamed La Louise) right here on the square. 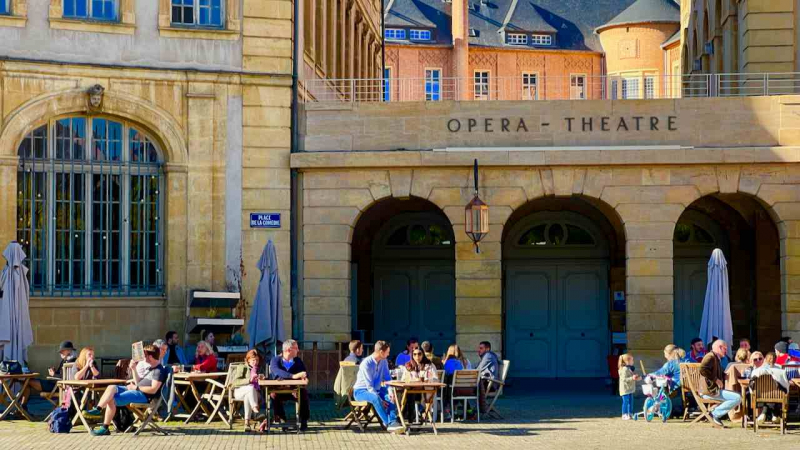 No worries: only musical and theatrical performances after the revolution 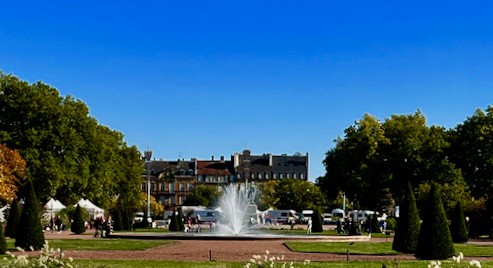 Flowers and fountains dominate the urban park known as the Esplanade.

On the way back to the railway station, walking along the leafy Avenue Foch, we’re back in the Imperial quarter. Along the avenue, Tour Camoufle is part of the medieval city walls. The tower used to be hidden amongst trees and greenery, hence the poetic name. 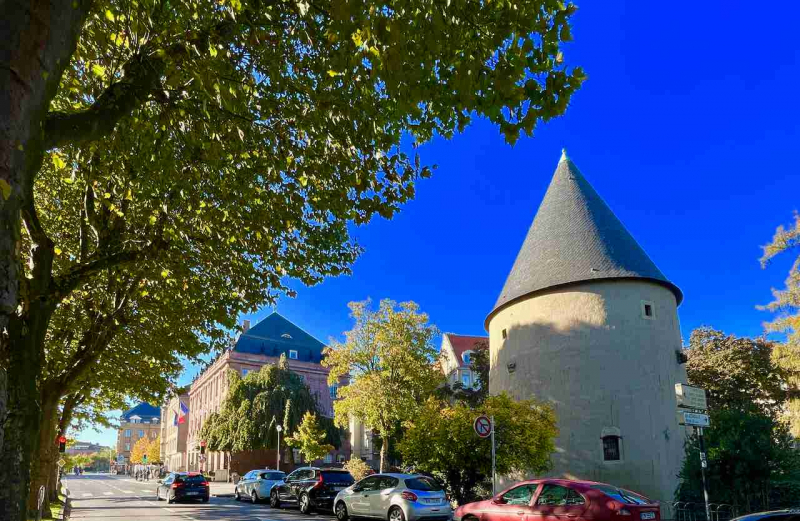 After our brief afternoon walk in Metz, we’re back at 1 Place du General de Gaulle and the railway station. 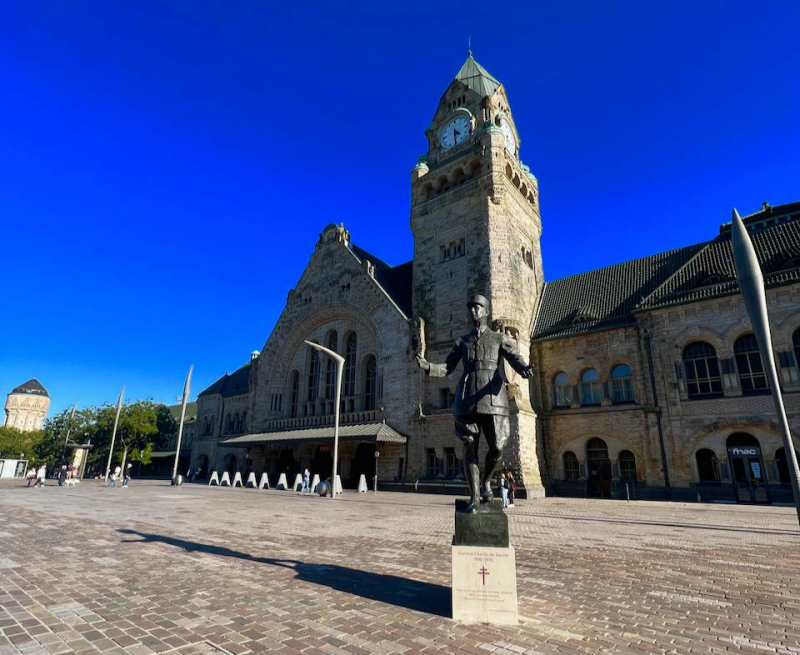 Things to see in Metz next time

There is more to see in Metz than our brief walk allowed. On my list are the fortified Porte des Allemands (The German Gate), Le Centre-Pompidou and Musée de la Cour d’Or (the archaeological museum). 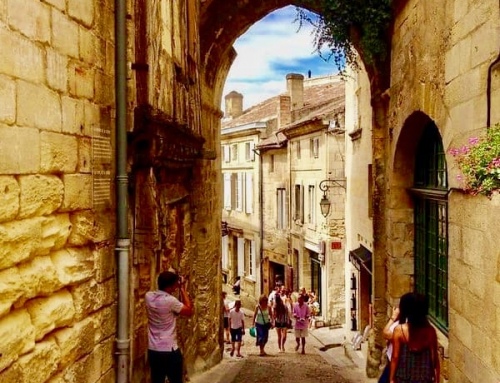 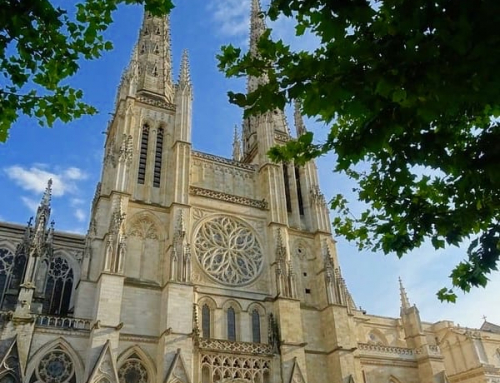 World at a Glance: The route to Santiago in France Gallery

World at a Glance: The route to Santiago in France 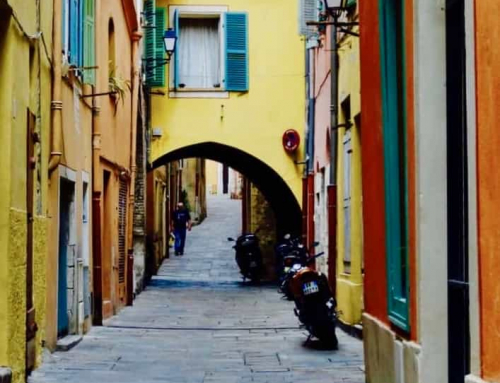 Villefranche in photos (Day out Nice) 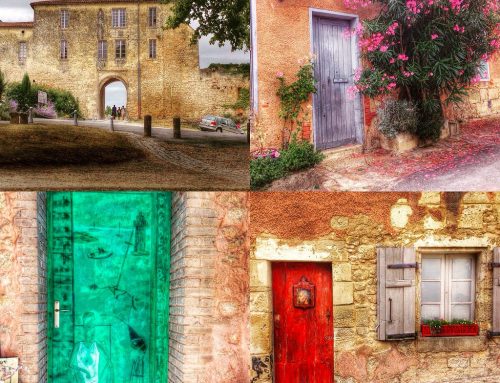