Greenwich is a lovely little village.

Village? But isn’t it in London, you ask? Well, yes. But isn’t London really a collection of little villages? At least, that’s how it feels.

Greenwich has that village feel. Perhaps strengthened because you have to cross the river to get here. Now, granted, if you take the tube, i.e. the Docklands Light Railway, you could miss crossing the Thames if you don’t pay attention. But if you take the boat – or better yet, the foot tunnel – you will certainly know.

Built on the dawn of the 20th century, this tunnel allowed dock workers who lived on the south side of the river an easy way to get to and from work. And it’s still there, including the mahogany-clad lifts and the twin brick rotundas on either side of the river that serve as entrances/exits. This thrills me so much, I devoted an entire post to this cool underwater way.

This post here, however, will be about Maritime Greenwich, and a little bit about leading-edge astronomy and time. And then I get a bit carried away with a man named Walter and a lost colony across the ocean. 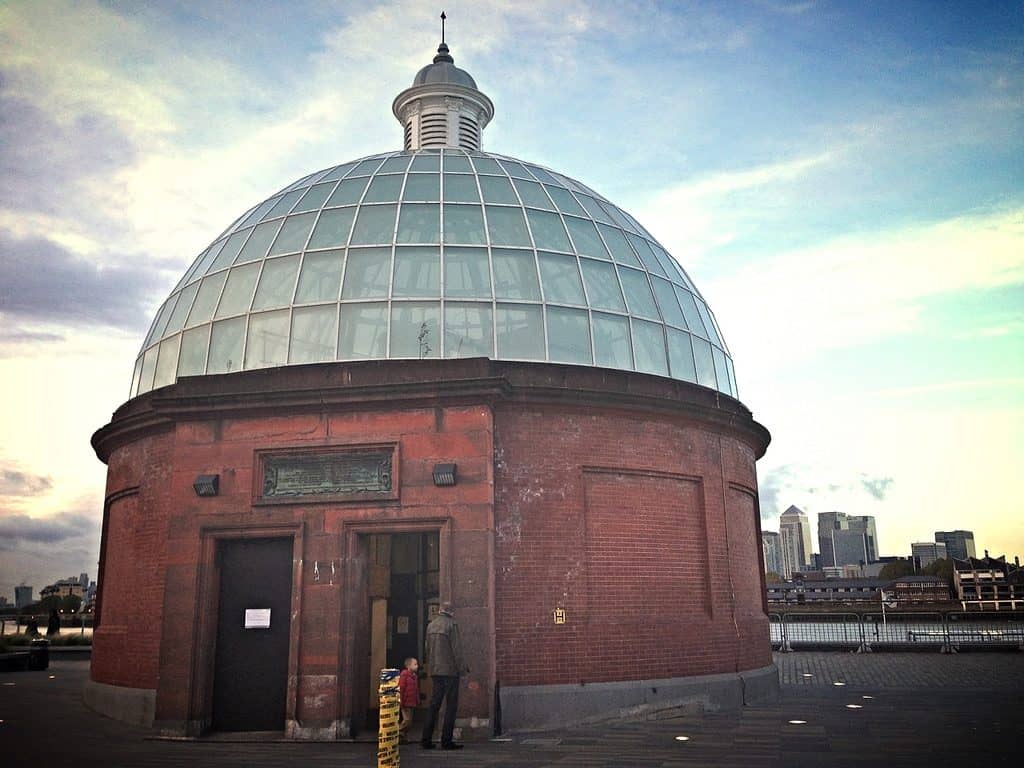 Entrance/exit to the foot tunnel on the Greenwich side. There is another one just like it at the other end.

The village of Greenwich is behind these stately buildings here: 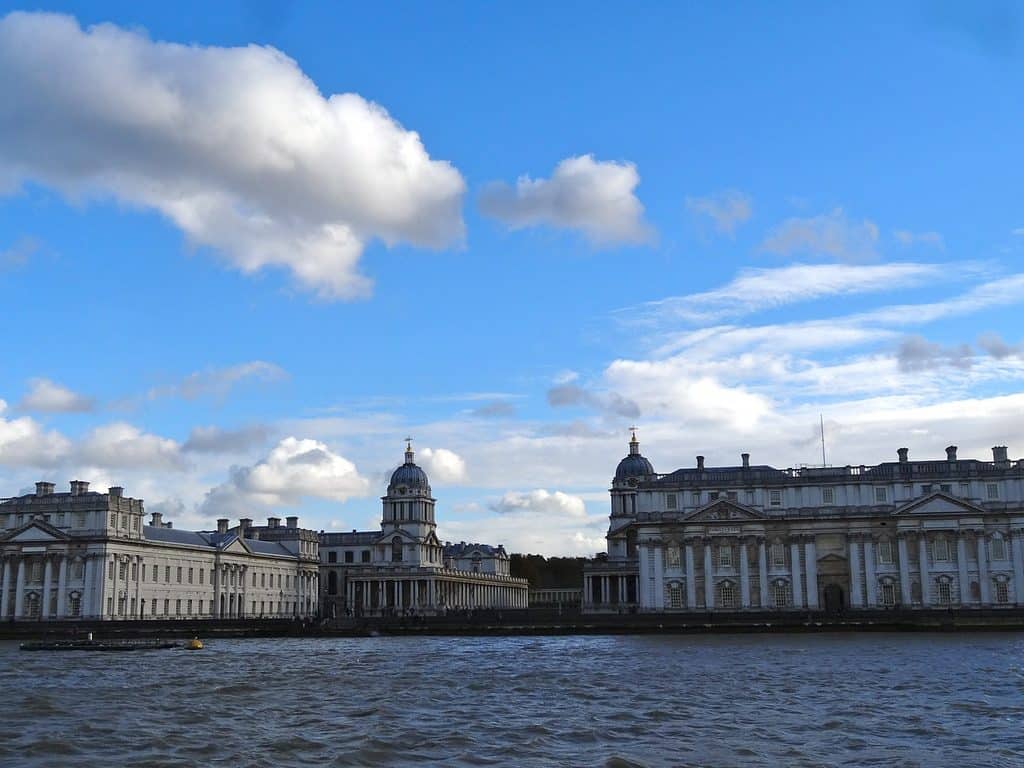 The ensemble of buildings at Greenwich, an outlying district of London, and the park in which they are set, symbolise English artistic and scientific endeavour in the 17th and 18th centuries 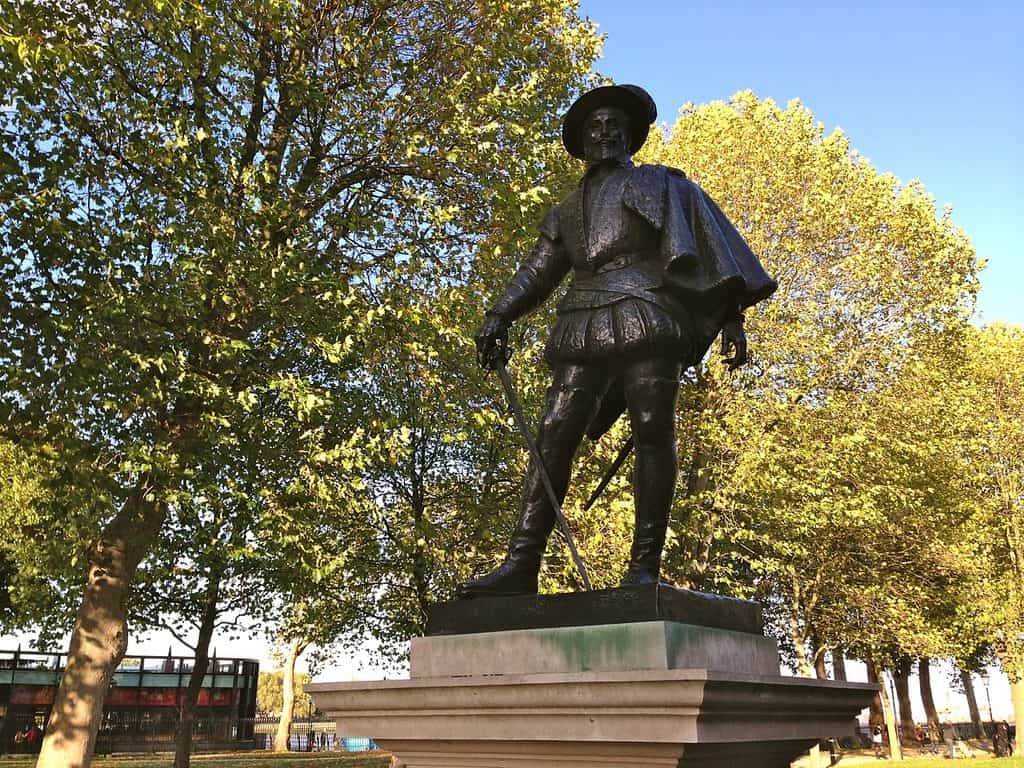 You’ll forgive the irreverent quote, because you’ll remember another Blackadder quote about his place of birth: Budleigh Salterton. (That said, the man had means, so the Budleigh Salterton Twilight Rest Home for the Terminally Short of Cash wasn’t relevant for Raleigh. Really.)

More importantly, I feel irreverence is allowed when we’re talking about a hero/villain. In this post, I mention pirates in the Caribbean, and how one country’s hero is another country’s pirate. Walter here was one of those. With royal permission.

Not only did Queenie allow him to plunder in foreign lands; she also encouraged him. Go out, she said, and

explore, colonise and rule any remote, heathen and barbarous lands, countries and territories, not actually possessed of any Christian Prince or inhabited by Christian People

Just so long as she got in return ‘one-fifth of all the gold and silver that might be mined there‘.

But Lizzie had no patience with slackers. He was given 7 years to fulfil this mission, or else someone else would have to take over.

Fair enough, thought Walt. ‘I’ll found a colony in America then’. And so he did.

Sadly for Walter – and for Queenie, the colony didn’t live up to its promise of gold and silver. But the good Walter was no quitter. If at first you don’t succeed, he said, and gave it another go. This time, not only did he lose money, but also people.

The mystery of the lost colony

Walter Raleigh never bothered to go to those shores himself. Instead, he sent others. Entire families. In 1587, Walter’s colonist-in-chief, one John White, brought a group of ca. 115 settlers to an island in present-day North Carolina.

Now, they didn’t get on so well with the people already living there, those settlers. Supplies were hard to come by, so after a while, John returned to England to replenish stocks for the gang.

‘I’ll be back within a year’, he said as he waved goodbye.

But as often happens, things, well, happened. One such thing, a pretty big one, was the Spanish Armada. Another was the ship making a detour to Cuba to plunder and steal. By the time John returned to the colony, the one year had turned into three, and the settlers had moved on. Perhaps.

Or they may have starved to death, gotten lost at sea, been massacred, or decided to integrate with the locals. We can only hope it was the latter. But theories abound. 430 years later, and we are still no closer to finding out. The settlement has ever since been known as the lost colony of Roanoke Island.

Back home in Blighty, Lizzie croaked and James I took over. Walter’s popularity waned and he was soon arrested for plotting to throw out the king. But James was merciful. ‘I pardon you and will let you out of the Tower provided you don’t get into trouble with the Spanish, as they are now our friends,’ he said.

You’d think that would be easy enough to uphold, wouldn’t you? Just, you know, leave the Spanish alone. But nooo!

Now, it must be said, Walter didn’t plan to violate the conditions of his release. But as we have seen, he was a man who liked to delegate. As a result, Lawrence Keymis attacked a Spanish outpost, presumably in Walter’s name. Not only that, but the attack also caused Walter’s son (also called Walter) to be shot and killed.

I suppose Walter might have counted on being forgiven for the attack on mighty España, what with losing his son n’all. No such luck. ‘Kill him,’ said the Spanish Ambassador to the king, ‘or we are no longer friends.’ And so King James did.

According to his biographers, Walter examined the axe that would decapitate him and found it to be ‘sharp medicine’ that would be sure to cure any disease. His final words were to the executioner: ‘What dost thou fear? Strike, man. Strike!’

Quirky fact(oid): Rumour has it, his wife kept his head in a velvet purse for the rest of her life, 29 years.

Now, having your head chopped off because one of your men goes rogue seems a bit unfair to me. But that’s leadership for ya. The top dog is responsible. 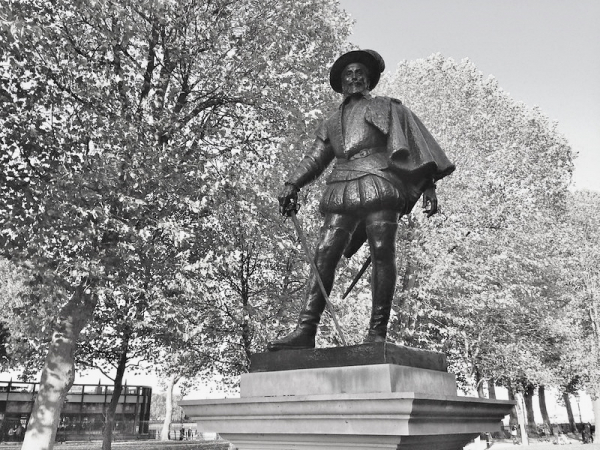 Perhaps you’re wondering what he’s doing in Greenwich? Well, despite not setting foot on Virginia‘s soil, Walter gets credit for founding that colony in 1609. To commemorate that momentous event, he was erected here 350 years later. 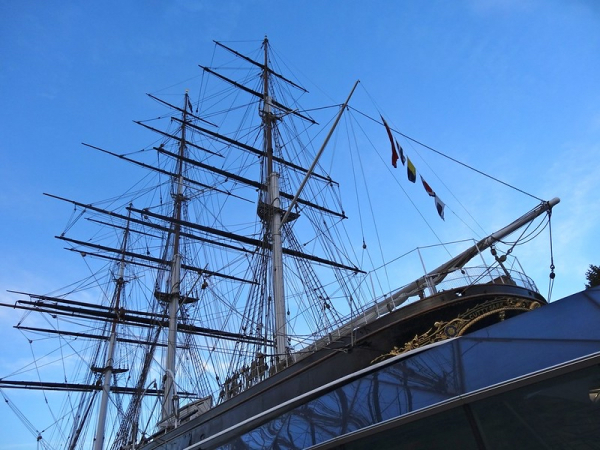 Just one minute from Walter is Cutty Sark. One of the fastest – and one of the lastest – sail ships, she has pride of place here. All sorts of fun can be had on board this proud clipper, including climbing the rigging. 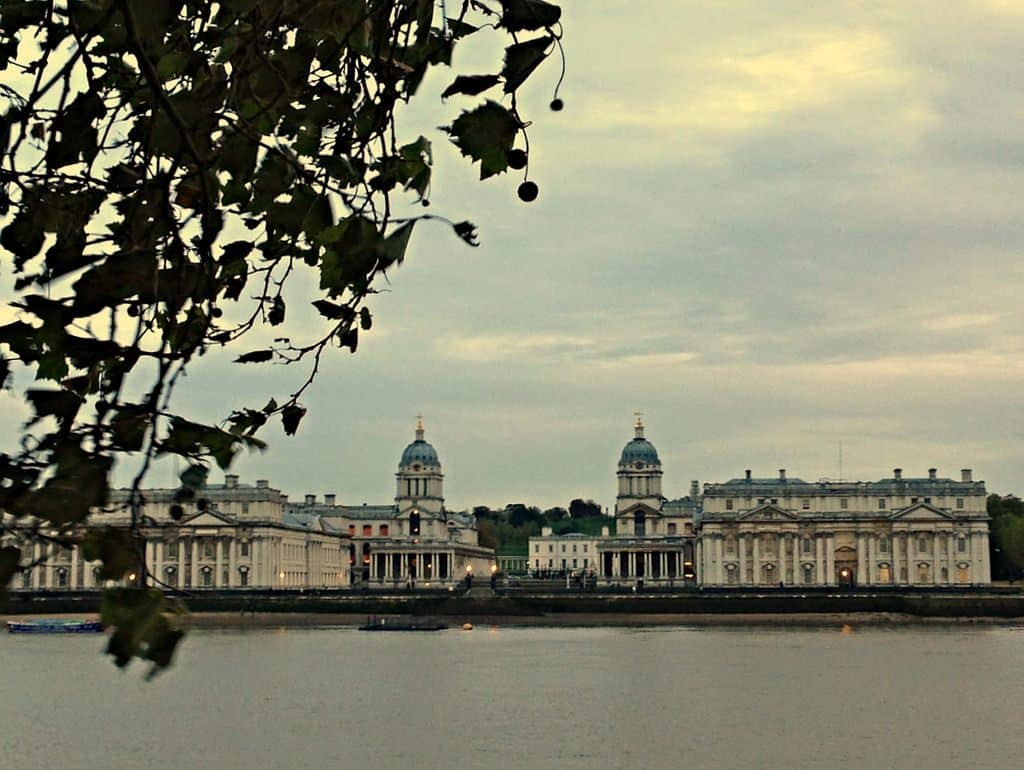 View of Greenwich from across the Thames

The two twin towers is the Old Royal Naval College, formerly a seamen’s hospital, and currently Greenwich University. The building on the left is Queen Mary Court with the chapel, and the building on the right is King William Court with the painted hall. The house in the middle, appearing tiny in comparison, is the Queen’s House. And behind that again, up on a hill, a bit to the right is the Royal Observatory. Home of time. 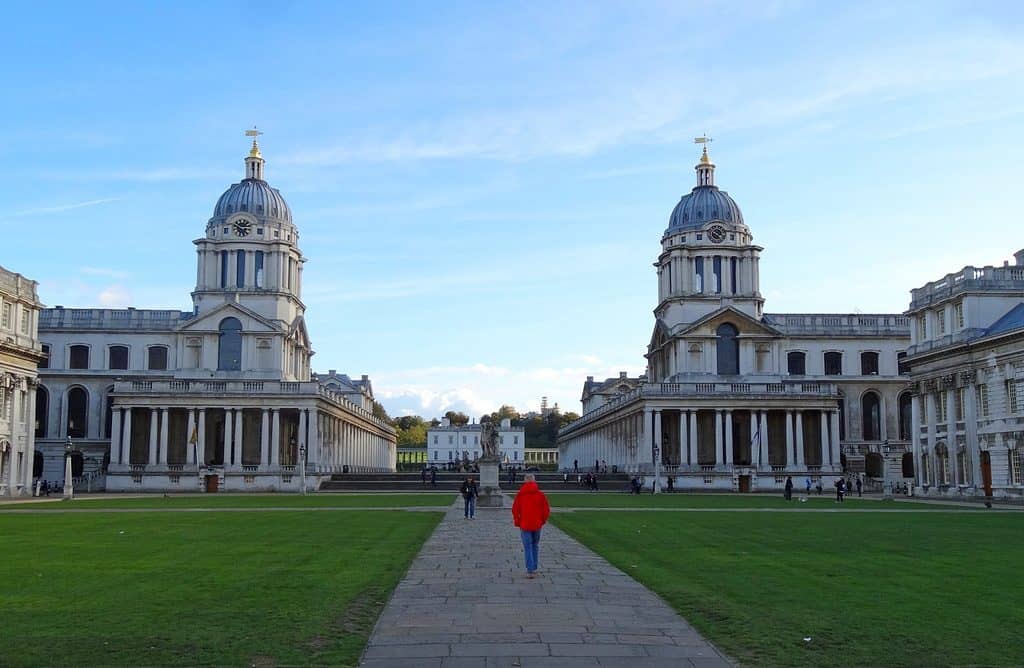 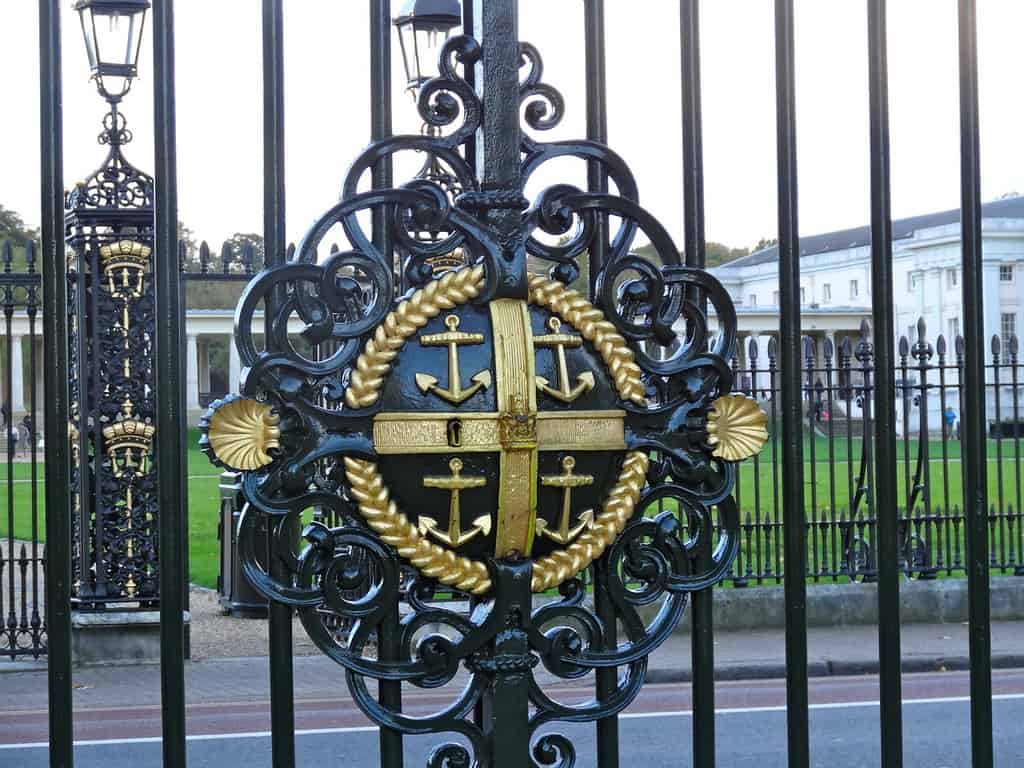 The badge of the Royal Seamen’s Hospital

Further back in time, another building was located here: Greenwich Palace, known as The Palace of Placentia, birthplace of a few famous historical figures. You may have heard of them. 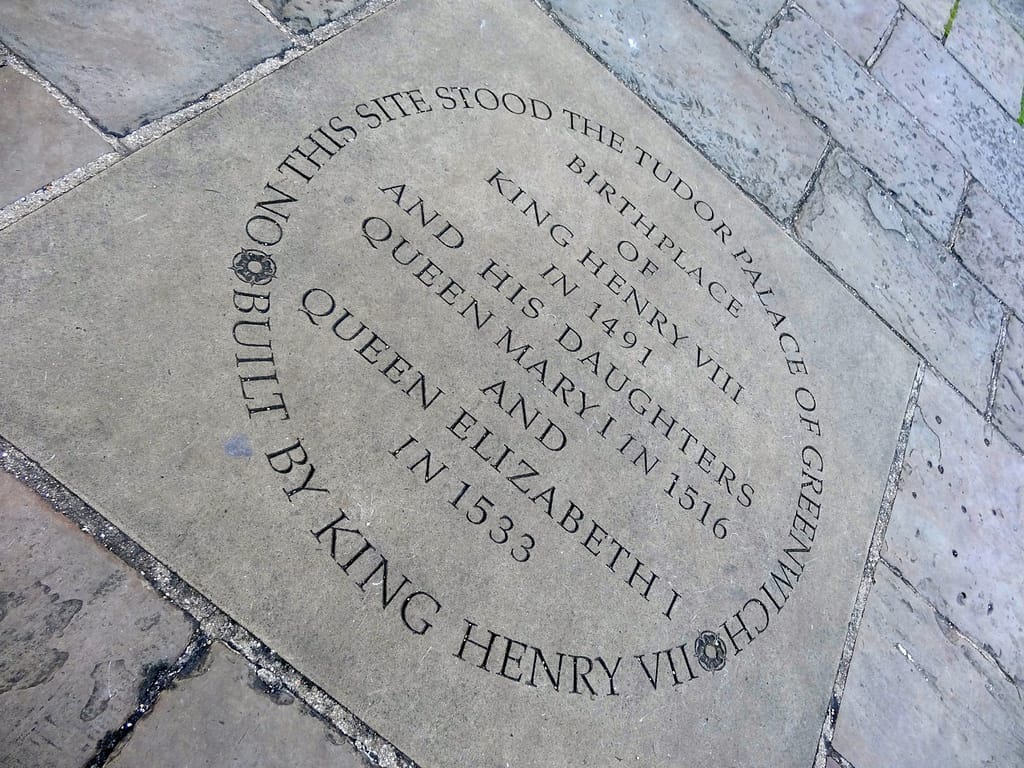 Who would have guessed, on that June day in 1491, that the little newborn babe would be England’s most famous – and infamous –  ruler of all time? For chopping the heads of his wives.

Moving right along, let’s have a quick peek inside the Painted Hall. In fact, when you’re here, don’t miss it!

3,700 m² covered in stunning art; 200 creatures from mythology and from real life. All created by James Thornhill, a veritable Michelangelo. Took him 19 years. 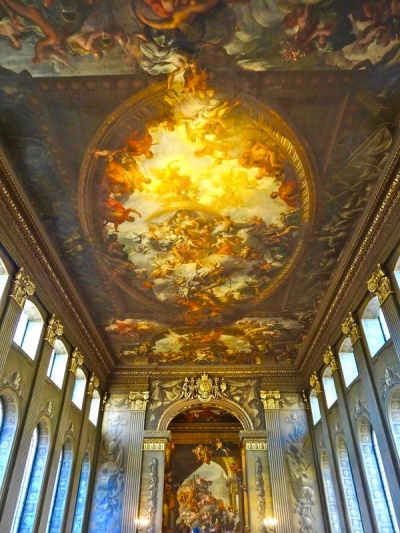 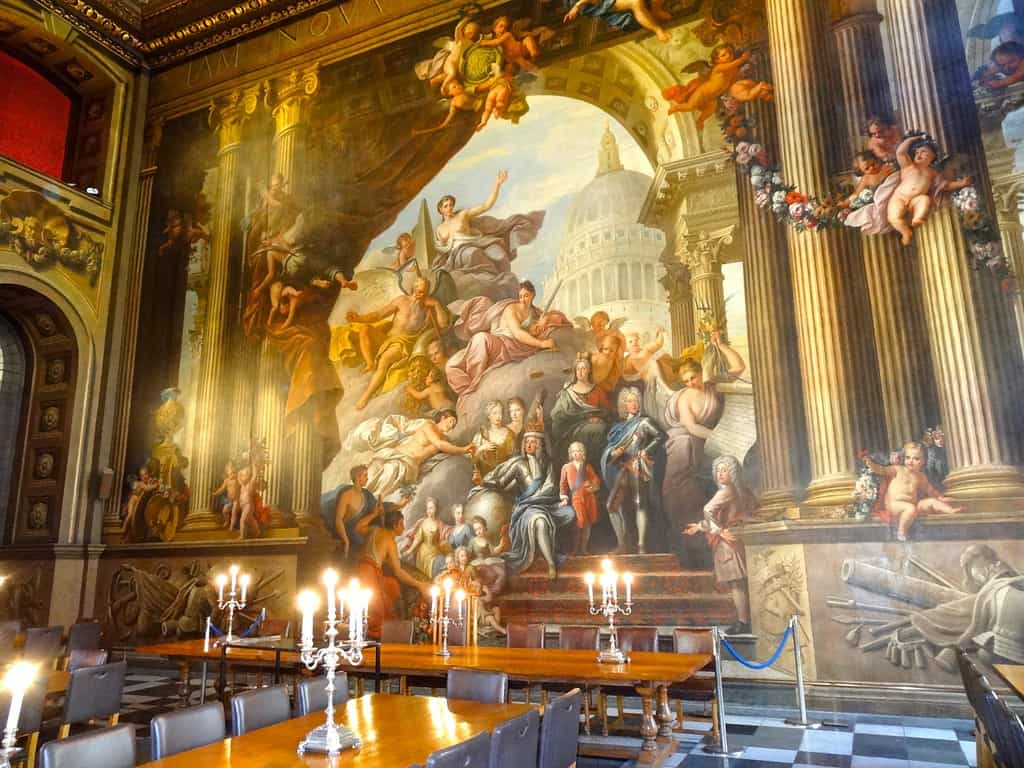 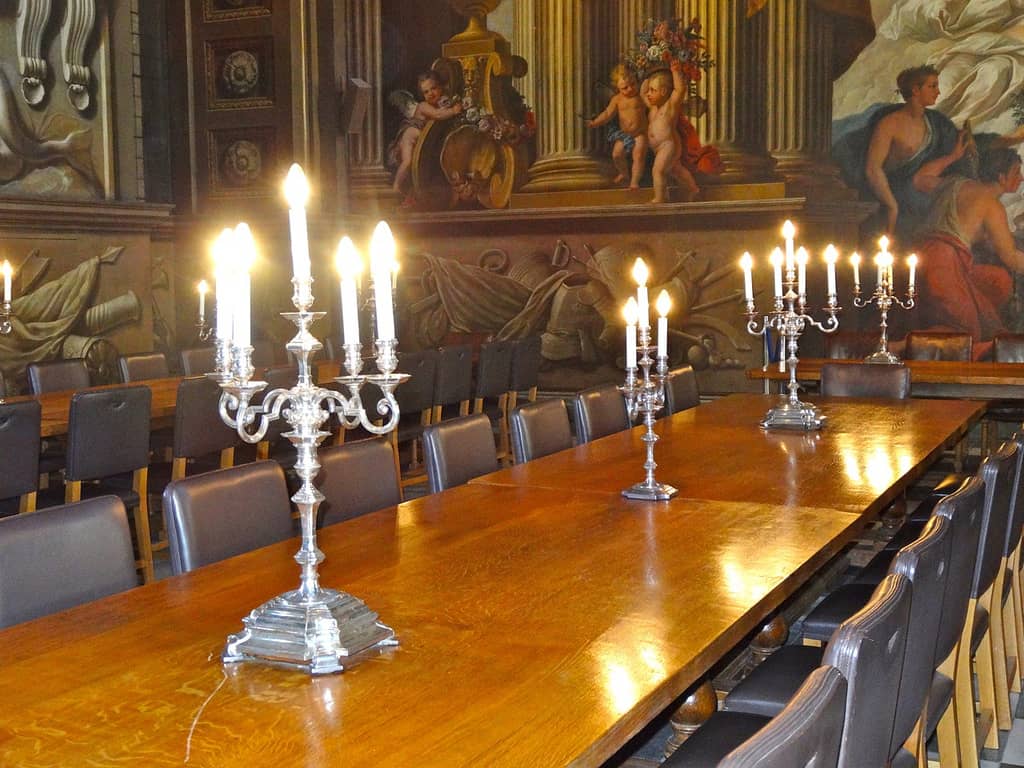 Oh, to have a daily meal at these tables. The conversations, the inspiration…

And here is Thornhill himself, bottom right corner: 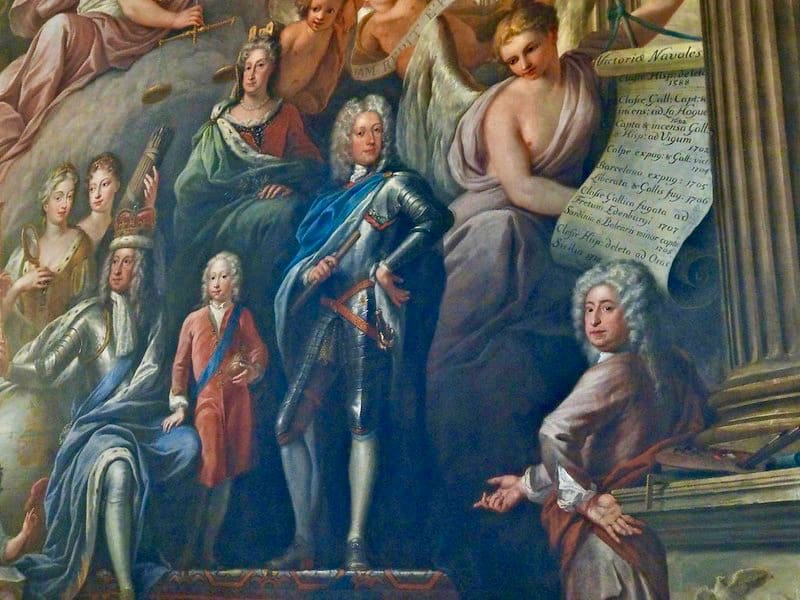 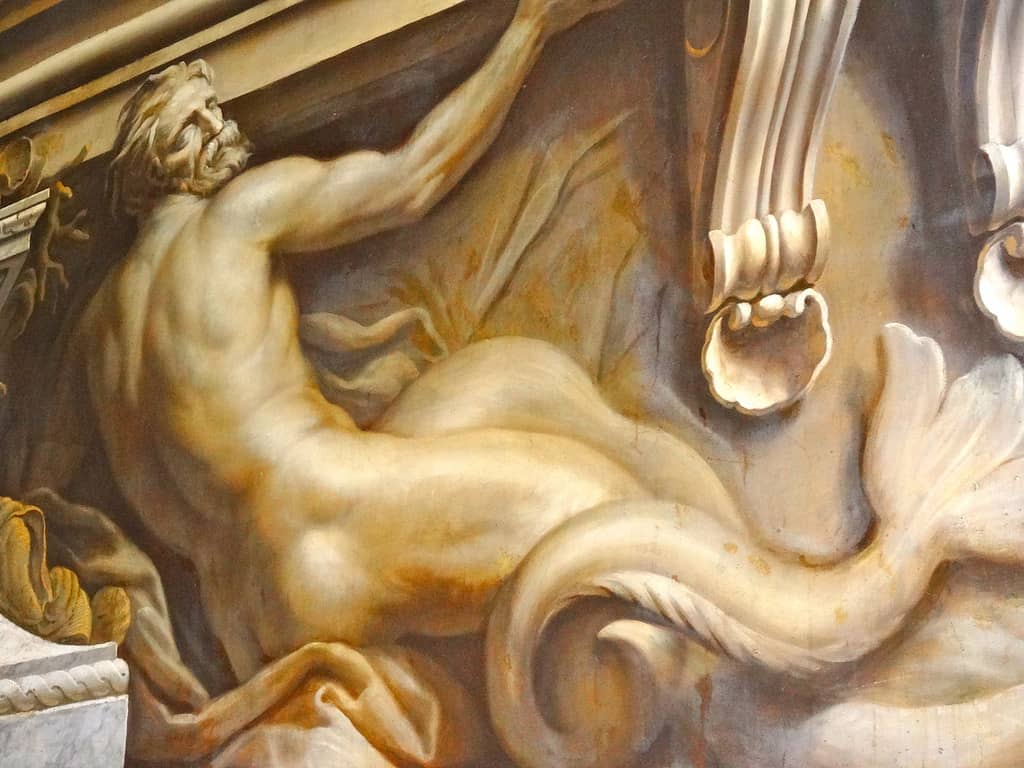 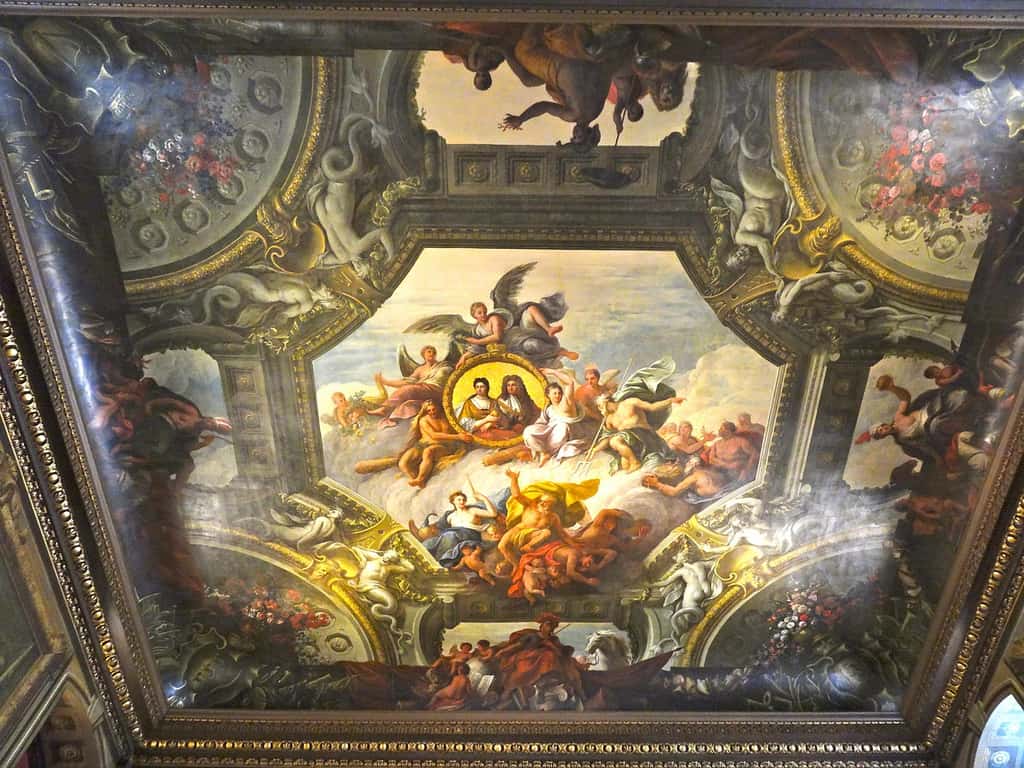 Over in Queen Mary Court is the chapel: 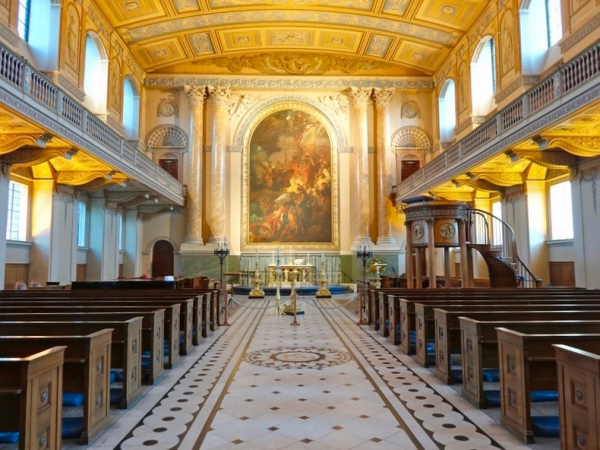 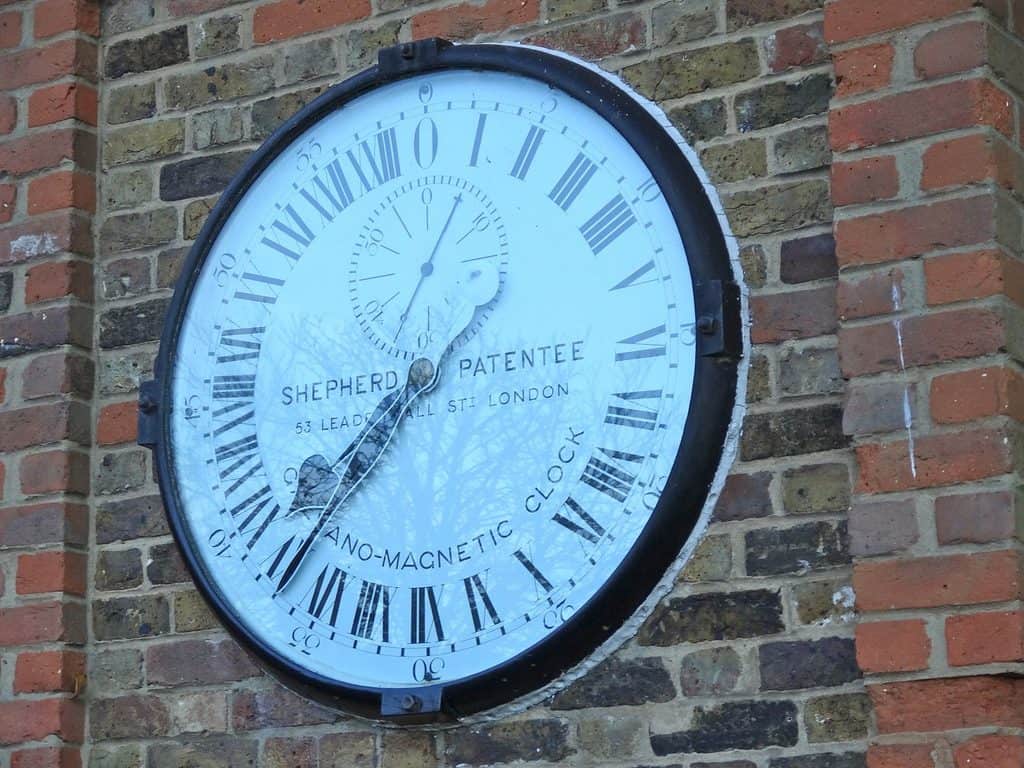 It’s time! Let’s climb up the hill and take a look at the Royal Observatory.

For centuries, this was a major player in improving navigation and worldwide time-keeping. Today, the observatory is mostly a museum; the scientific work has moved elsewhere. But back in the day (i.e. 350 years ago),  it was run by an Astronomer Royal (that title!), whose job it was

to apply himself with the most exact care and diligence to the rectifying of the tables of the motions of the heavens, and the places of the fixed stars, so as to find out the so much desired longitude of places for the perfecting of the art of navigation.

The position still exists, and the Astronomer Royal has been responsible for several discoveries through the centuries. In fact, the current Lizzie regularly checks in with Martin Rees, the latest Astronomer Royal.

Quirky fact: Back in the day, the Astronomer Royal was paid £100 per year. However, as opposed to rent at the Fuggerei, where inflation has been non-existent for 500 years, the salary of the Astronomer Royal has kept up with pricing over the centuries. Rees’ salary last year was £20,646.85 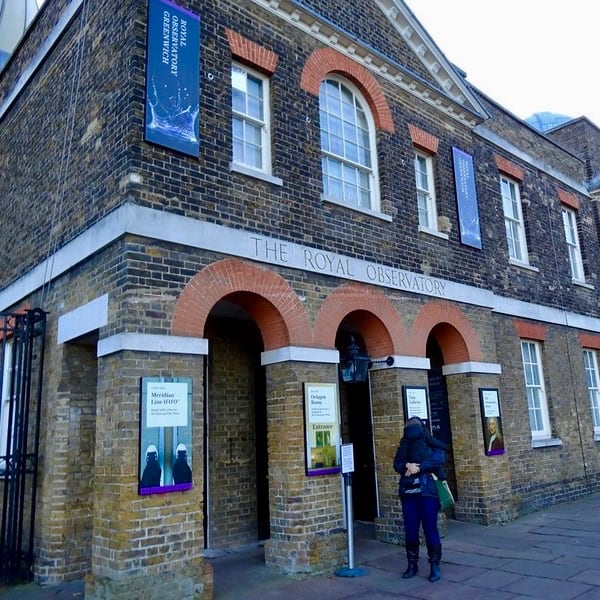 See the poster on the left there? This is the only place where you can stand with your feet on either side of the world’s only prime meridian. Going from the North Pole to the South Pole, wherever you are in the world, it is measured in angles from this line. And that, folks, is pretty exciting stuff!

Either side of zero