Welcome back to Poland. I’ve written about Gdansk and Warsaw earlier. Today, we’re heading south, to Krakow. Like Warsaw, Krakow’s Historic Centre is a World Heritage site, to be specially preserved for future generations. 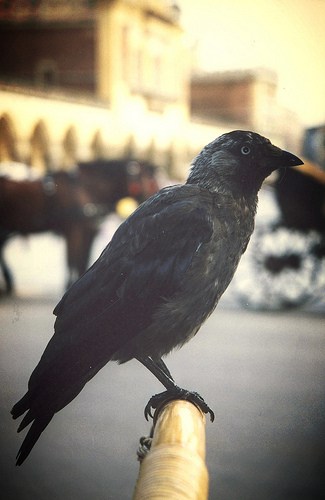 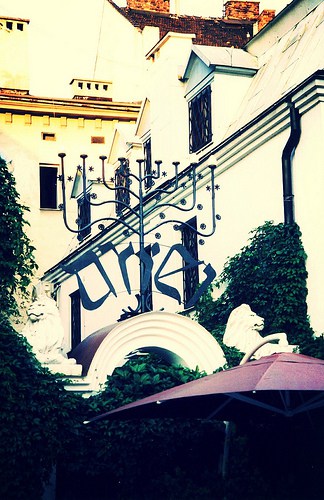 The historic centre of Cracow, the former capital of Poland, is situated at the foot of the Royal Wawel Castle. The 13th-century merchants’ town has Europe’s largest market square and numerous historical houses, palaces and churches with their magnificent interiors. Further evidence of the town’s fascinating history is provided by the remnants of the 14th-century fortifications and the medieval site of Kazimierz with its ancient synagogues in the southern part of town, Jagellonian University and the Gothic cathedral where the kings of Poland were buried. 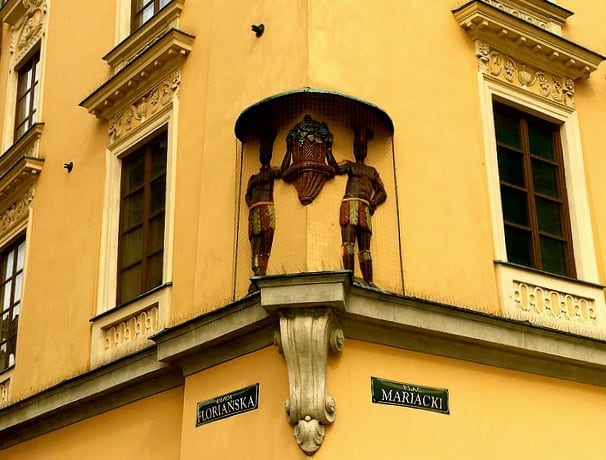 Poland’s old royal capital was – and still is – a beautiful city. As opposed to Gdansk and Warsaw, both suffering extensive damage during Word War II, Krakow somehow managed to avoid the worst of it, and offers a well-preserved, pleasingly crumbly ancient historic centre. It’s exceptionally easy to get around by foot, and by public transport.

Here are my 11 favourite things to do and see in Krakow: 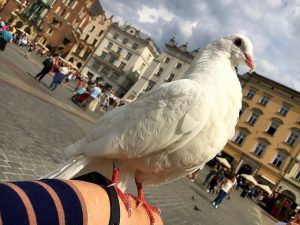 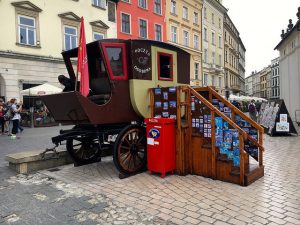 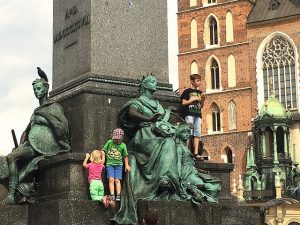 At 40 000 m2, lively Rynek Glowny is one of the largest medieval town squares in Europe. If you have kids along, it’s an excellent spot to let the little ones run loose for a bit. (Statues are for climbing.) Cosy outdoor cafes abound, with a great selection of food and drink, all very affordable. In the evening, it’s the perfect place to sit with a glass of wine and watch the many performers, some of them very talented, or just soak in the atmosphere. 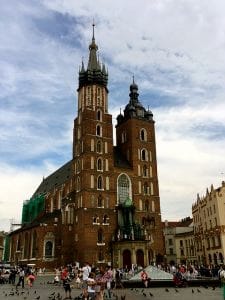 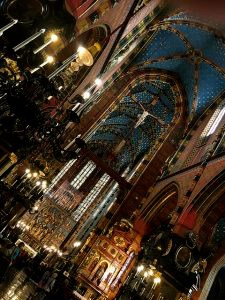 Pride of place at Rynek Glowny is the Gothic Church of Our Lady Assumed into Heaven, better known as St Mary’s Church. Every hour on the hour, from the top of the tallest tower, a member of the fire brigade plays the Hejnał mariacki, a traditional 5-note Polish trumpet tune, as they have for 700 years. You can climb to the top of the tower to see the trumpeter (and the stunning views). Wondering why the signal breaks off in the middle? That’s in memory of the poor trumpeter who was shot in the throat while sounding the signal when the Mongols ambushed Krakow in the 13th century. The noon time signal is broadcasted on Polish national radio every day. 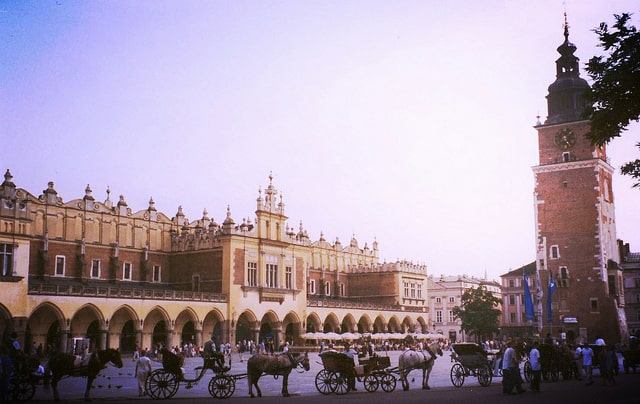 Also on Rynek Glowny is the renaissance Sukiennice, the Cloth Hall, where everything has been for sale through the centuries. Today, it’s mostly knick-knacks and souvenirs being offered from the many stalls. Great place for people watching. There’s a museum upstairs (free admission on Sundays). 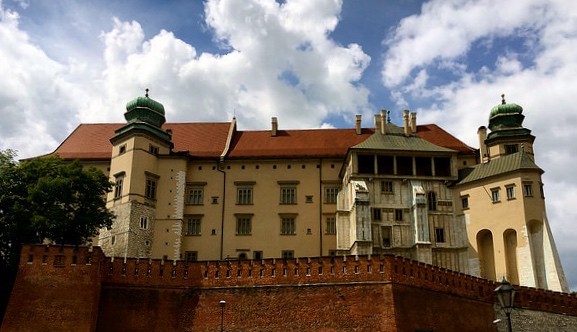 This complex on top of an odd outcrop next to the Wisla River was once a political powerhouse. Major sights are Wavel Castle, the cathedral and, enticingly, a dragon’s lair.

Wawel Castle is a curious castle. It’s one of the most important historical sights in all of Poland and seemingly, just about every architectural style for the last millennium or so is represented here. It’s a friendly place; easy to wander around. The cathedral has underground crypts, royal remains, and the bones of a dragon with magical properties!

But let’s get to the dragon’s den: This kitschy place has a bronze dragon at the entrance that breathes fire. For 3 euros you can climb down the narrow stairs to the dragon’s lair. But as always, it’s about the story. And this one has all the ingredients – a kingdom, a princess, a clever hero and a dragon:

Once upon a time, there lived a vicious dragon in the caves beneath Wawel Hill, one Smok Wawelski. According to legend, Smok had a penchant for devouring sheep and young girls, so naturally the locals wanted him out of the way. He turned out to be a particularly difficult kill, though, until the clever cobbler Krak injected a sheep with sulphur. Smok ate the sheep – and exploded. Of course, this noble act won Krak the princess and the kingdom. He built his castle above the dragon’s lair, and people built the city around it, naming it after their gallant king; hence Krakow. 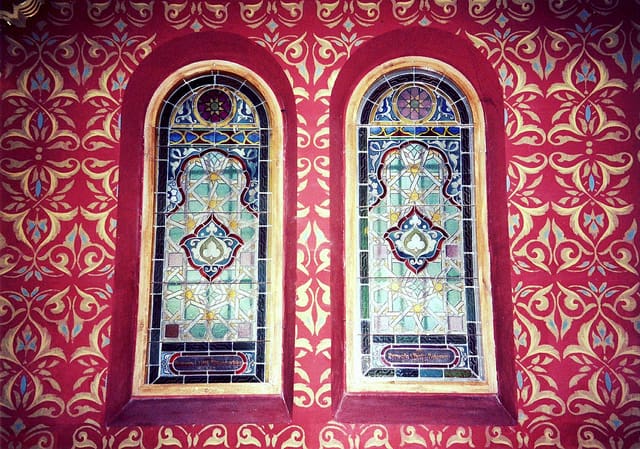 Krakow’s old Jewish quarter is very different from the Old Town. It’s rustic, atmospheric and rich in tragic history, and has a time travel feel. Have a look at Corpus Christi Church, as well as the synagogues (seven of them here in Kazimierz)… 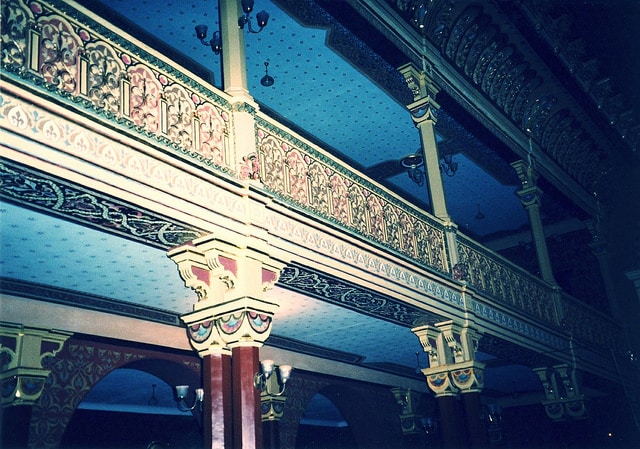 … the medieval Szeroka Street market and the charming, bohemian Plac Nowy (Nowy Square). Kazimierz has cool shops, restaurants, pubs, pleasant little squares, and if you’ve heard rumours of a lively party scene in Krakow, this is where you’ll find it. 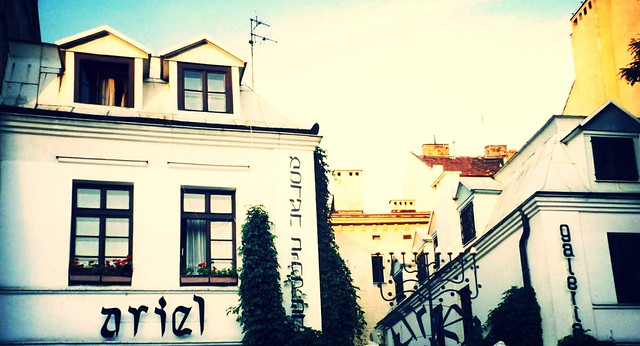 You’ve seen (or at least heard of) Schindler’s List, of course. About the wealthy German industrialist who rescued more than 1000 Jews during World War II by giving them jobs in his factories. The movie was filmed in Kazimierz and you can see the locations on a free tour. 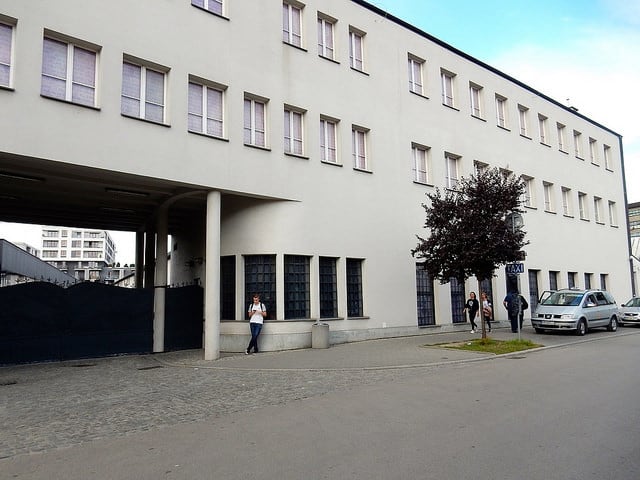 Stroll (or jog, if you’re so inclined) along Krakow’s river – or have a pleasant picnic by the riverside. The river flows past Wawel Hill and through the city, with bridges and foot paths along the banks. Barges and boats offer cruises.

If you want to enjoy nature in and around Krakow, you’re spoilt for choice. The large Planty Park surrounds the old town and comprises several individual gardens, each with their own style. Also, the Jagiellonian University has a botanic garden with more than 5000 species. 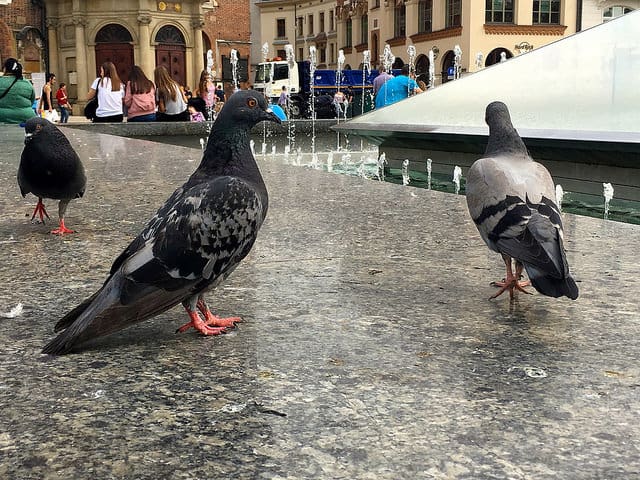 Get out of town:

If you’re a World Heritage geek, Krakow is a good base for exploring several sites. In addition to Krakow’s historic city centre, no less than four World Heritage sites are within easy reach:

The world-famous Wieliczka Salt Mine is only half an hour away from Krakow (post  is here). 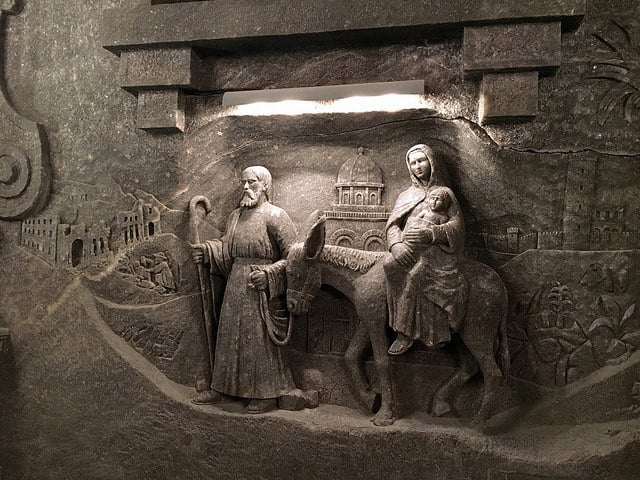 The Architectural Park Kalwaria Zebrzydowska is about an hour away.

Also nearby, you’ll find the Wooden churches of Southern Malopolska. 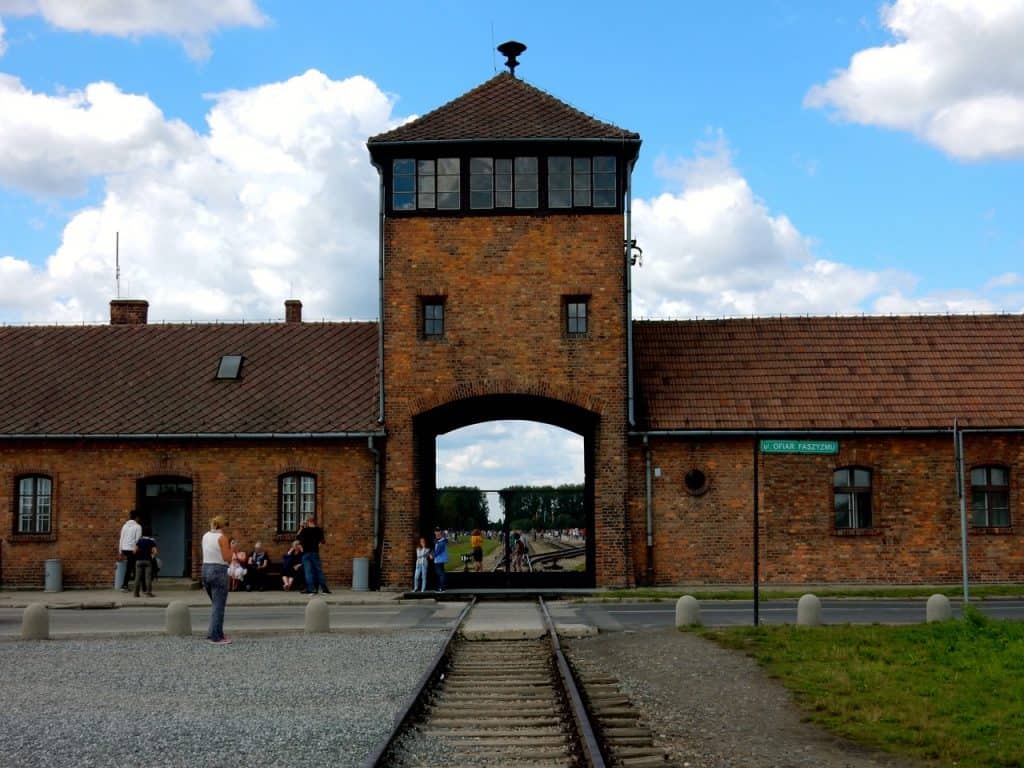 An hour away from Krakow is the little town of Oświęcim, better known by its German name Auschwitz, that most chilling of places. If you’re up for it, you can read more about the most infamous of concentration camps here.

PS Ever thought of studying abroad? Lately, Poland is appearing as a very popular alternative for European – and American – students. And what’s not to love? Fascinating history, sunny beaches and a bustling nightlife. Best of all, it’s a very affordable country, so your student loans will go far.

Concerned about the language? With all those consonants, it seems a bit of a challenge to crack. How about Szczyz? (that’s a male name, by the way.) Well, fear not, many of the country’s universities have programmes in English. Medicine and veterinary medicine are especially popular choices, and the various medical schools have programmes tailored to fit the varying requirements of the students’ home countries. 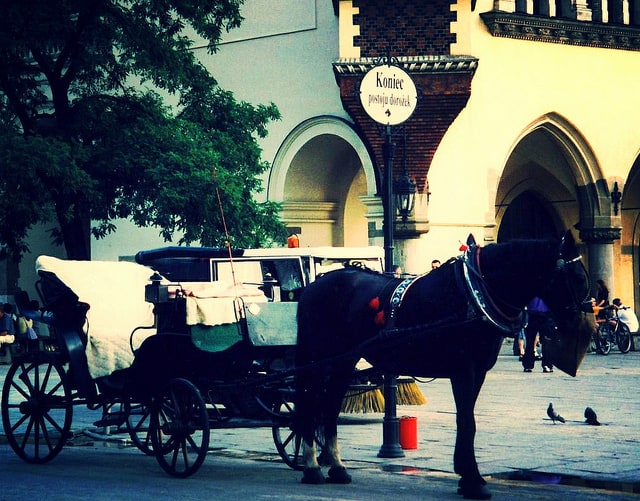 Have you visited Kraków? Have I missed your favourite Krakow things to do or see?

The Historic Centre of Kraków is a UNESCO World Heritage site.
Here are more heritage sites I’ve visited around the world. 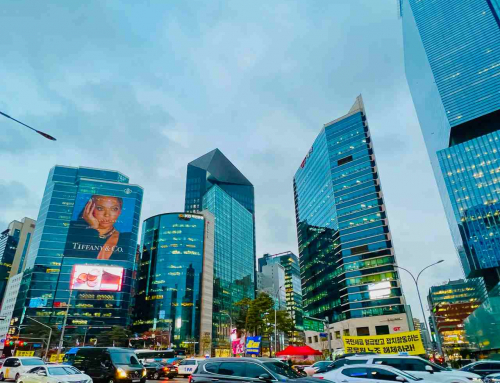